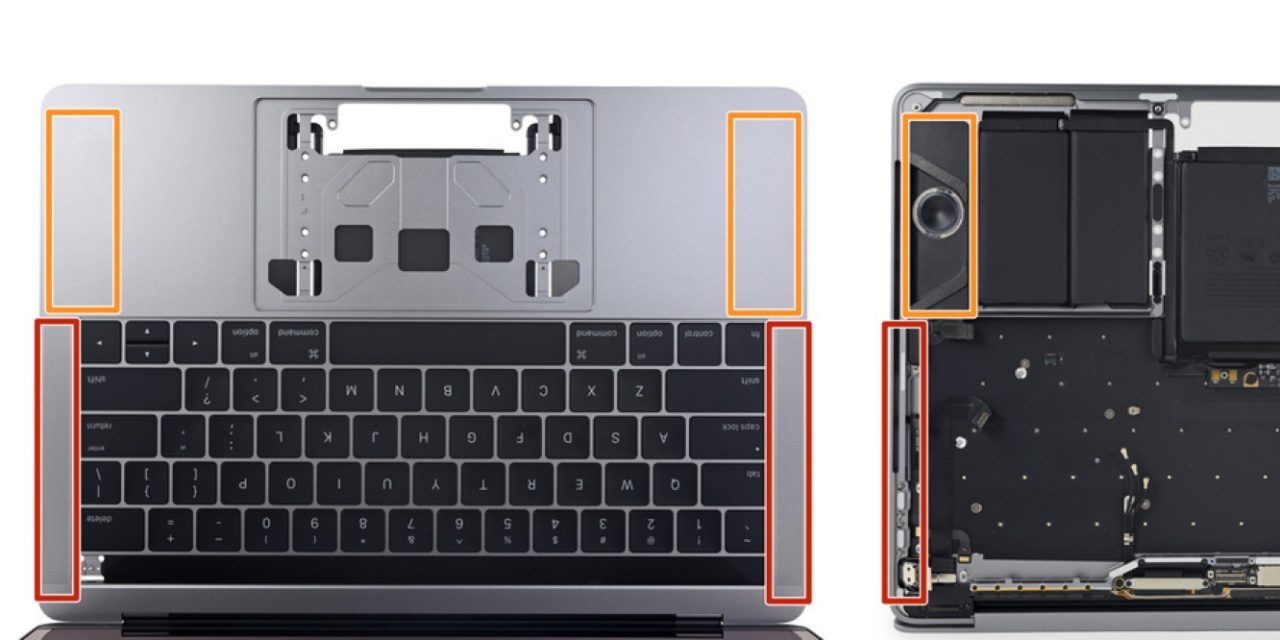 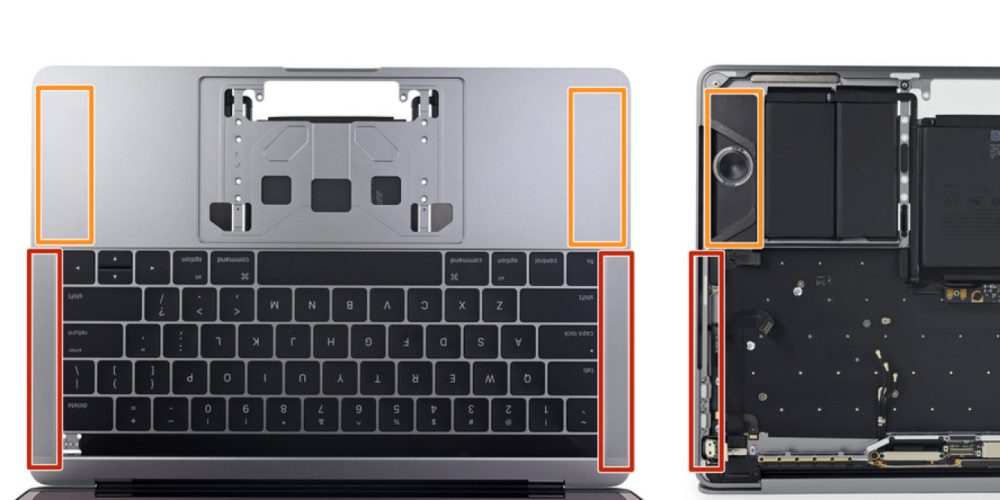 With the new MacBook Pro now shipping to customers, iFixit have got their hands on the new 13-inch MacBook Pro with Touch Bar and have disassembled it and completed their usual teardown. There are quite a few differences between this model and the cheaper 13-inch 2016 MacBook Pro that retains traditional keys; teardown for that model here.

Much of the internal component layout has been adjusted to accommodate the inclusion of the Touch Bar. Apple’s latest laptop scores just 1/10 for repairability as Touch Bar is difficult to replace and the battery is glued into the case. Interestingly, the new speaker grilles on the 13-inch model appear to serve no function and are purely cosmetic …

The new 2016 MacBook Pro’s do feature better speakers but the grilles on the left and right of the 13-inch MacBook Pro with Touch Bar do not seem to help in any way.

Like the cheaper 13-inch, the trackpad (2x larger than the previous model) is easily replaceable as it slides out after removing ten accessible screws. It also appears that the trackpad component is identical in both 13-inch 2016 laptops which means there should be plentiful quantities of replacement parts.

That is iFixit’s only positive thing to say about the laptop in regard to repairability, though. The laptop is in no way designed to be user-serviceable. The SSD storage is not upgradeable as it is soldered to the board as is the RAM and processor. The 5-cell battery is also glued down with adhesive which means a lot of pain in the repairability world.

The new Touch Bar appears very difficult to replace; iFixit actually broke the component when they pulled it away from the chassis. The flex cable for the Touch Bar also wraps underneath which makes removal even more tricky.

iFixit also notes that because the Touch ID sensor doubles as the power button, which pairs with the Apple T1 chip on the logic board, fixing a broken power switch will likely require replacing the entire logic board. (By the way, the Touch ID button does have a sapphire cover just like the iPhone and iPad Touch ID home button, so scratching shouldn’t be an issue.)

iFixit rated the laptop a measly 1/10 for repairability although this isn’t really a surprise and follows the general trend of Apple products becoming less user-serviceable with time. The speaker grille revelation is perhaps the most interesting find in the entire teardown, the fact that they appear to serve no function other than aesthetics. It seems like Apple wants the design of the 15-inch and 13-inch model to match. See iFixit for the full teardown report.