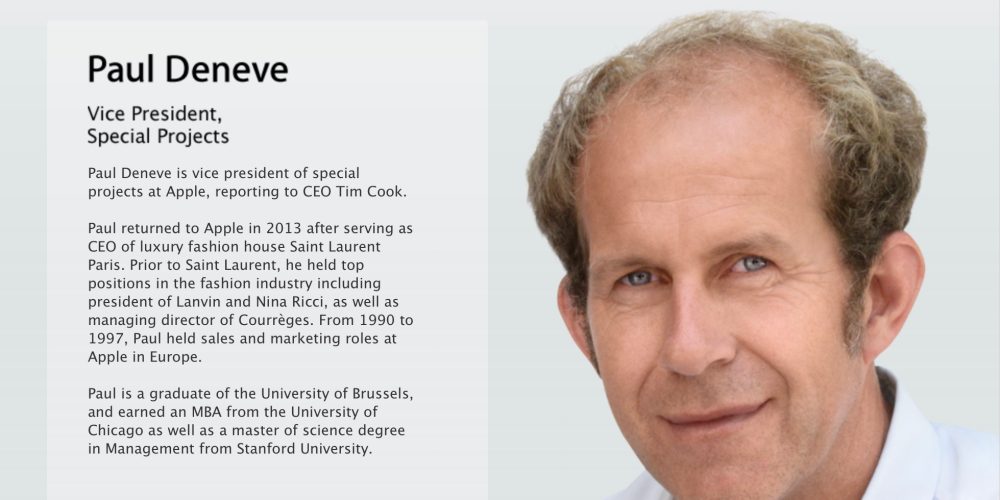 Apple’s vice president of special projects Paul Deneve has disappeared from the Apple executive bios page on Apple’s website. Deneve joined Apple in 2013 after serving as chief executive officer at fashion brand Saint Laurent. His removal from the biography signifies a change in management structure; Deneve now reports to Apple COO Jeff Williams rather than Tim Cook directly. Deneve is thought to have played a key role in the design and development of the Apple Watch.

Since his arrival in 2013, Deneve’s duties have always had an air of mystery taking on the vague title of ‘Vice President, Special Projects’. Unofficially, he has been seen as one of the people leading Apple’s entrance into the fashion world, headlined by Apple Watch.

His contributions to the Watch project are now reaffirmed by his new role working under Jeff Williams, who leads the Apple Watch product division.

It’s interesting that Deneve has been moved from reporting directly to the CEO; the company (unsurprisingly) didn’t elaborate on the motivation for the change. He is still listed as a vice president of the company.

Apple says that Paul Deneve is still at the company but now reports to Jeff Williams, who runs Watch, rather than directly to Tim Cook. 🤔 https://t.co/TbZTaBBlFZ