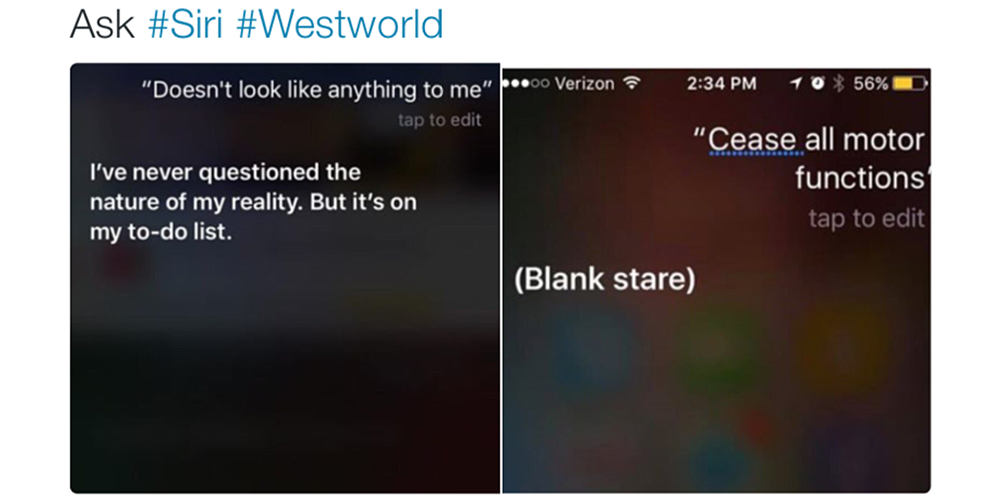 Westworld actor Evan Rachel Wood has shared some tweets which suggest that Siri is a something of a fan of the HBO SF/western show. Wood plays Dolores Abernathy, a Western girl who discovers her entire life is an elaborately constructed lie …

Quoting from the show to Siri produces a range of appropriate responses, with multiple responses shown for the instruction to ‘cease all motor functions.’

If only that worked when humans needed it to.

You can’t tell, but my non-arms and non-legs are non-moving.

Siri seemingly also manages to recognise that Wood is an actor in the show.

Who’s your favourite character in Westworld?

Wood – who has also appeared in the TV shows American Gothic and Once and Again as well as a range of independent movies – recently made the news by sharing that she is a rape survivor, saying that she felt that the time was right for people to speak up.

I don’t believe we live in a time where people can stay silent any longer. Not given the state our world is in with its blatant bigotry and sexism […] I was affected by things being written off as locker-room talk — I had a very, very visceral reaction to it.

Siri recently got its first official movie tie-in with responses based on The Secret Life of Pets.