After making AirPods available earlier today and subsequently announcing the delay of the W1-equipped BeatsX, Apple this evening has cut the price of two of its Beats products: the Beats Pill+ Speaker (not as low as Amazon’s $188) and the Beats EP On-Ear Headphones as a way to make up for the delay.

Though the price cuts are nothing too notable, they show goodwill on Apple’s part in attempting to make up for the delayed BeatsX launch and AirPods supply issues. Amazon, for instance, also offers the Beats Pill+ for $199 and has for a while now. Though, Apple does offer the RED variant of the product, while Amazon does not.

Even better, when you put the Beats Black Pill II+ in your basket, the price drops to $188 shipped 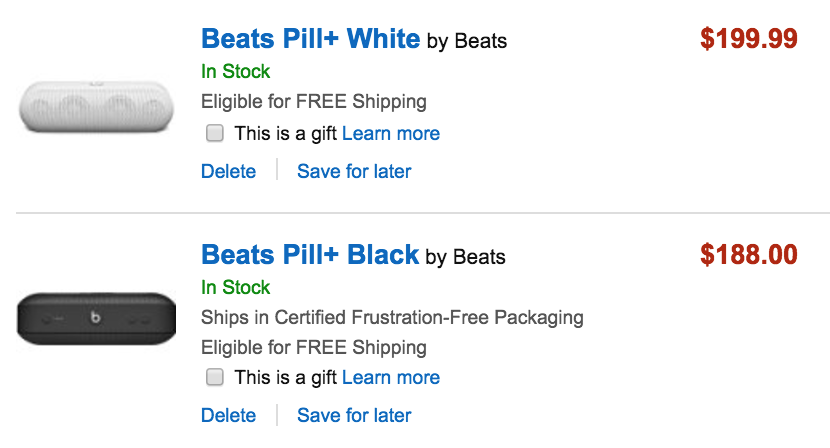 The first speculation regarding a delay for the BeatsX began earlier this week after a third-party retailer sent out an email to customers informing them that it would be two to three months before their order was shipped. Apple then confirmed the delay this morning, updating the product page for the BeatsX to reflect a new February release date target.

In the meantime, the W1-equipped PowerBeats3 are available now for $199 and make a good option for those iPhone 7 users who need a wireless solution. The Beats Solo 3 also feature W1 support and are available now.

Following the release of the new USB-C MacBook Pros, Apple also discounted various USB-C products as a way to ease the transition for users. The product discounting strategy is an interesting one for Apple, but it seems to be its strategy for making up for disappointments with its users.

Apple’s discounted Beats Pill+ and Beats EP On-Ear Headphones are available on the company’s website now with immediate shipping. Is Apple’s discount enough to make up for the BeatsX delay in your mind? Let us know in the comments.