Evernote’s privacy policy allows its employees to read your notes, and you can’t opt out – but it’s a little more complicated than that [Update]

Not interested in potentially sharing the content of your Evernote notes with the company’s employees? Then your only option will be to leave the service, because you can’t opt out. Although it appears that this particular policy has already been in place for some time, an upcoming January update to the privacy policy has shed additional light on the issue.

These “other reasons” that Evernote refers to are a part of an already ratified privacy policy that’s been in place for some time now. In other words, if you use Evernote currently, you are already subject to having your notes accessed by company employees. This is not a new change. 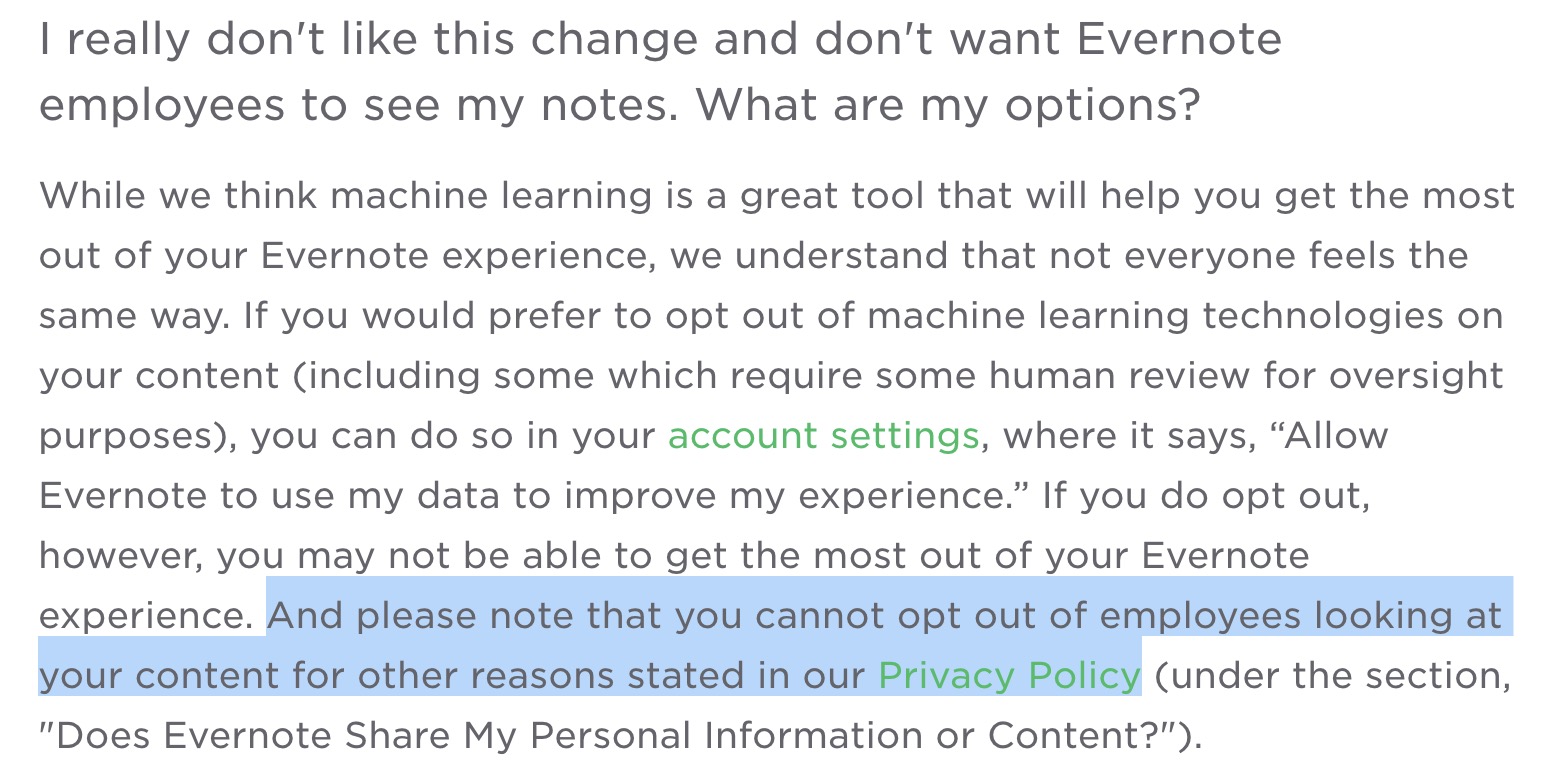 But opting out of machine learning only prevents the computers from processing your notes, and humans from reviewing your notes for machine learning-related purposes. Human employees are still allowed to personally access notes for a variety of reasons outlined in Evernote’s privacy policy, and this policy is already enacted as we speak.

Some provisions that allow employee access to your data include the following:

And here is a screenshot of a portion of Evernote’s Privacy Policy from back in January of 2016, which again shows that employees may have limited access to your notes: 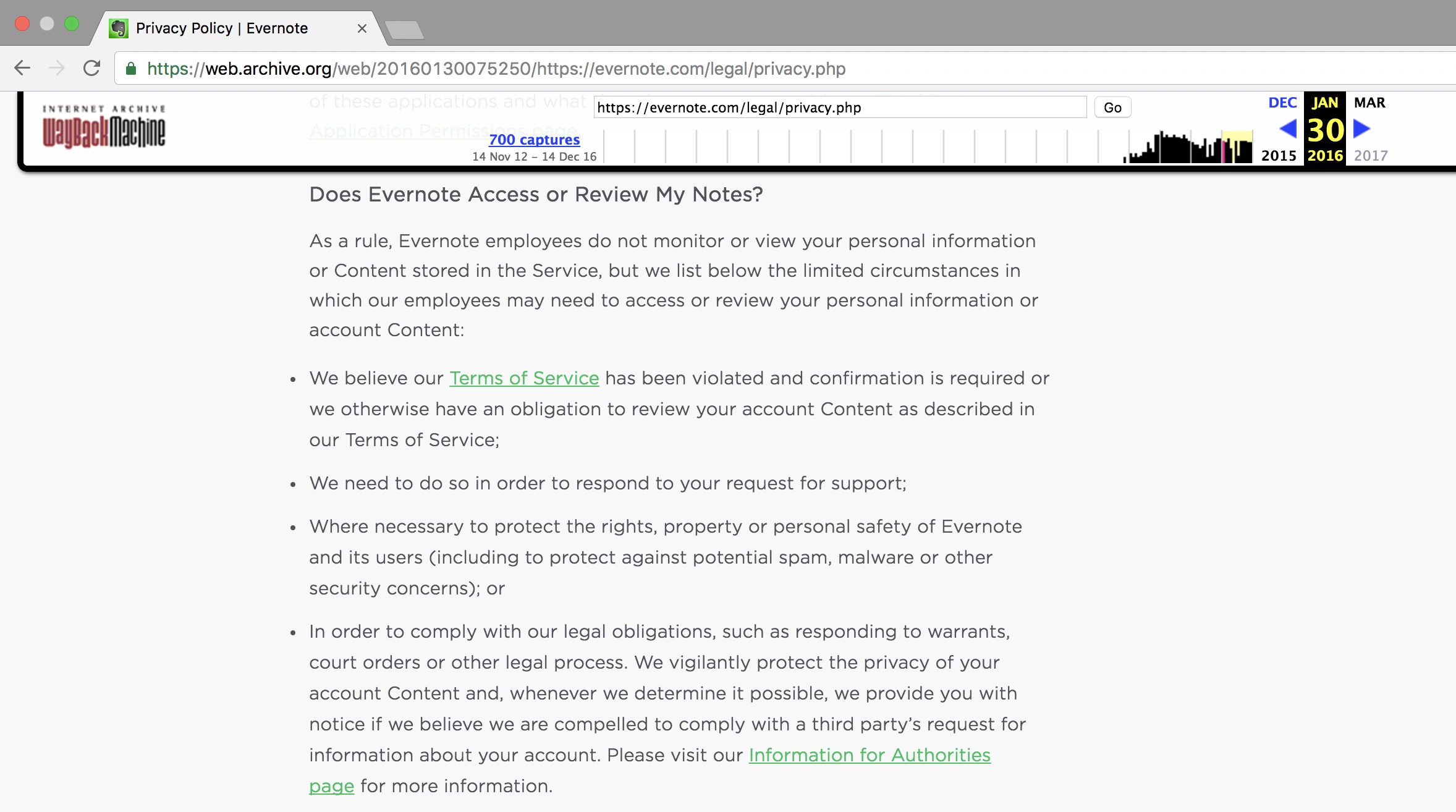 To be fair, Evernote isn’t giving jurisdiction to all of its employees, as only a limited set will have the necessary privileges to access customer data. These new changes relate to monitoring machine learning activities in relation to customer data, but the employee access to data in a broader sense isn’t actually a new change, it’s apparently something that was already present in previous versions of Evernote’s privacy policy.

Yet, the optics of a such a change have caused an outcry on Twitter. That’s not to say that I agree with Evernote’s policy, but understand that this update isn’t really changing much from what’s already possible with the currently existing policy.

Nonetheless, this news coupled with the recent basic account limitations and price hikes, will surely leave a lot of customers looking elsewhere to store their data. One such option is Apple’s Notes app. Apple has made it easy to migrate notes from Evernote to the Notes app.

If you’re a current Evernote user, will you be sticking with the service, or do you plan on migrating elsewhere?

Evernote’s CEO, Chris O’Neill, has responded to yesterday’s reports about the company’s privacy policy. His response both affirms and clarifies what was stated in our post above.

We recently announced an update to Evernote’s privacy policy that we communicated poorly,  and it resulted in some understandable confusion. We’ve heard your concerns, and we apologize for any angst we may have caused. In response to the questions you’ve raised, let me be clear about what’s not changing and what is changing.

O’Neill goes on to explain that Evernote employees do not view the content of user notes except in very limited cases, such as where required by the law, troubleshooting, etc. The number of employees who are authorized to view this content is extremely limited by Evernote’s existing policies, and the CEO is personally involved in defining them. From this, users will not have the option of opting out of, and it’s been this way well prior to the recent privacy policy update.

What is changing, as O’Neill notes, is what we explained in our original post. Customers that opt in to machine learning may have their data viewed by Evernote employees to ensure that the features are working properly. However, O’Neill does clarify how this data will be accessed, and whether or not it is personally identifiable:

If you choose to participate in these experimental features, you’ll enjoy a more personalized experience. Select Evernote employees may see random content to ensure the features are working properly but they won’t know who it belongs to. They’ll only see the snippet they’re checking. Not only that, but if a machine identifies any personal information, it will mask it from the employee.

These are key details that were not properly explained in the initial update to the privacy policy, and it resulted in the outrage that we saw yesterday.

Hopefully this clarifies things to the point where existing Evernote customers can make an informed decision about future relationships with the company. It’s unfortunate that the original privacy policy update didn’t include this clarifying language, as this would have resulted in much less confusion and outrage.

I’ve personally decided to stick with Evernote, as it’s by far the best app for my use case. I’ve long used Evernote to go paperless, and I’ve found that its storage and search functionality is a step above the rest for my particular use case scenario.