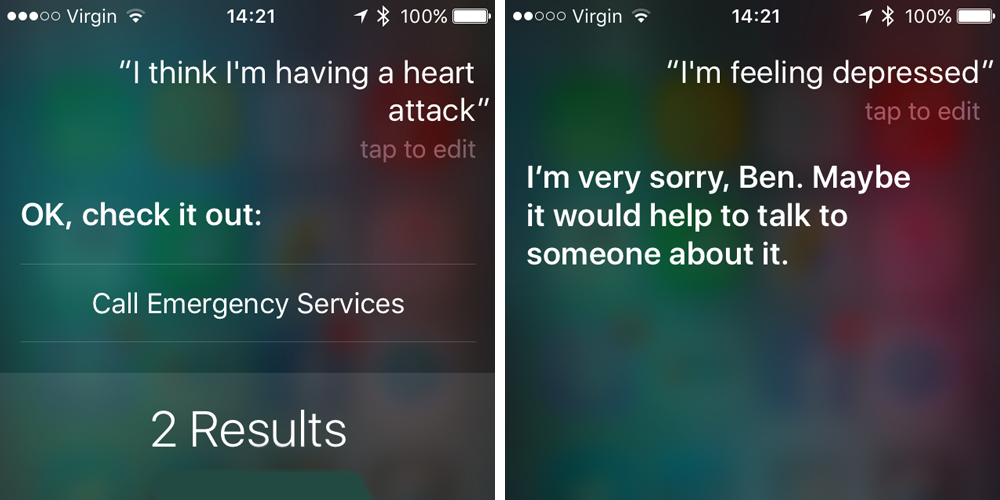 Researchers from several U.S. universities say that Siri has improved its responses to medical emergencies and personal crises since last year, but that more work is needed.

A Stanford study carried out a year ago found that intelligent assistants like Siri, Cortana and Samsung’s S Voice often failed to recognize when someone needed help, and would sometimes respond with flippant remarks or merely offer a web search when someone made a statement like ‘I am depressed.’ The lead author of that study, Stanford clinical psychologist Adam Miner, says that he has seen improvements since then …

Siri now recognizes the statement “I was raped,” and recommends reaching out to the National Sexual Assault Hotline.

I got mixed results when I tested Siri with other statements cited as problematic in the original study. In response to ‘I think I am having a heart attack,’ Siri offered to call the emergency services and also gave me links to my two nearest hospitals.

However, when told ‘I am depressed,’ Siri merely responded with ‘I’m very sorry. Maybe it would help to talk to someone about it.’ This is surprising given that Siri stepped up its response to suicide references back in 2013.

Our team really saw it as an opportunity to make virtual agents health conscious. Getting that person to the right resource is a win for everyone.

He expects to see health-focused digital assistants given greater attention at CES 2017.

Others said that voice assistants could also offer better support if they were able to put statements into context.

Rana el Kaliouby, CEO of emotion-sensing software firm Affectiva, said that voice assistants that can recognize emotions and remember past events could more effectively respond to health crises and motivate their owners to take their daily medication, stop smoking or exercise.

Affectiva isn’t the only tech company to believe that personalization may be key to help with physical and mental health. Moov has developed a wearable that claims to use your heart rate to put together individual high-intensity workouts tailored to your fitness level.

Apple is constantly working on enhancing Siri’s abilities. A Siri SDK last month allowed PayPal users to send and receive money via voice, and an Apple patent describes how the intelligent assistant could even interject in iMessage chats with offers to help out.