As Apple continues to expand its retail presence around the world, the company is said to be planning a new flagship location in Milan, Italy. According to a local report, Apple’s preliminary guidelines for the store were approved by the city’s planning department last month.

According to the report, Apple has big plans for this location and intends to make it much more than just another retail store. The report notes that the location will be “one of the most innovative and technological Apple Stores in the world.”

Apple’s plans depict an outdoor amphitheater where it plans to host culturally focused events throughout the year, with it already having agreed to host 8 public events per year with potential for at least an additional 4 events per year.

Apple’s amphitheater is said to be “the heart of the square.” The entrance of the store will be marked by a glass screen made from a waterfall. The interior is also said to be fully modernized and redesigned.  Here’s how local media describes it (translated from Italian):

Behind this is a glass screen made from a waterfall, which will mark the entrance to the store at an altitude of -3.24 meters from the plaza level. At the store you can also access from the stairs that will be realized within the so-called ‘portal,’ a fully glazed structure whose sides are placed two bowls of water, as well as two flights of stairs on either side of the steps and a lifter in the square to ensure the full accessibility of the shop.

They will also be the interior completely renovated that currently house the Apollo cinema, redone flooring, reposition the neighboring grids to Via San Paolo and planted some trees.

Italian city planners call the location an “ambitious project” that will offer a new place for both citizens and tourists to visit. Apple will be paying the City of Milan € 768,732.15 for the cost of reconstruction of Liberty Square, while the company will also pay € 127,435 per year for use of the public square areas.

At this point no timetable has been set forth for the new Apple Store in Milan. It’s said that it will be designed by Foster and Partners, who are also designing Apple’s new flagship location in Paris and the company’s new Campus 2 headquarters.

Apple is rapidly expanding around the world, with retail stores planned for South Korea, the country’s first, as well as Paris, China, and India. 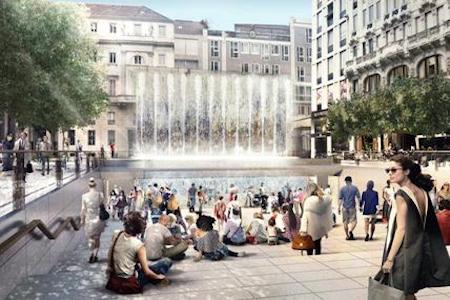