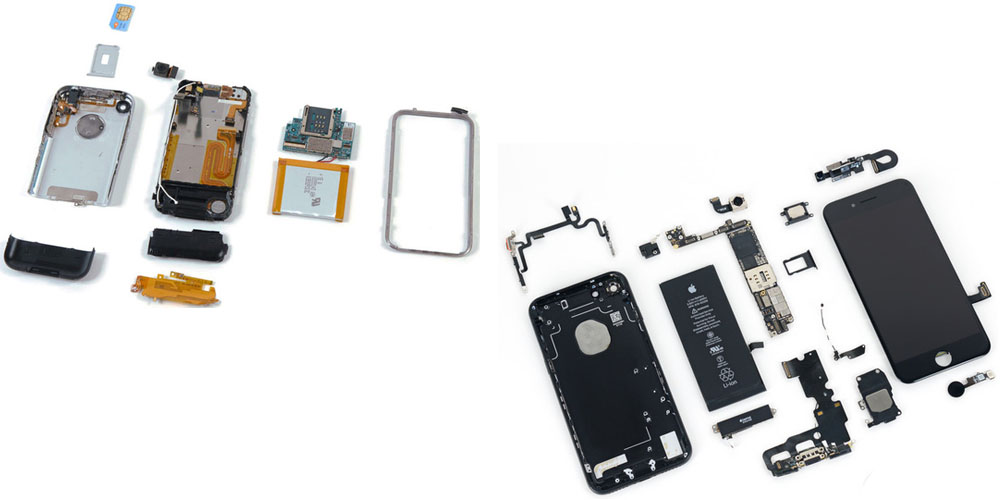 With the 10th anniversary of the iPhone getting plenty of attention, iFixit has joined in by posting photos and repairability scores for every iPhone from the first generation (left) to iPhone 7 (right).

While iFixit of courses focuses on the repairability of the different models (noting that the first ever iPhone was the worst, with a score of just 2/10), what’s interesting to me is to see the change in the apparent complexity of the designs over the ten years …

The two are, of course, partly related: the more iFixit is able to separate the discrete components, the more complex the design appears. But the 3GS has the same repairability score as the latest iPhone 7, so it’s also a matter of the sophistication of the models, with the addition of features like Touch ID requiring additional components.

Also very visible is the way that the battery has grown as the size of the screens and radio capabilities become more demanding of power.

iFixit is impressed by the way that iPhones have remained amenable to DIY repairs over the years.

iPhones have become taller, wider, and skinnier. But they’ve also become more repairable. The very first iPhone earned a dismal 2/10 on our repairability scale. It had a soldered battery and was almost impossible to open without breaking the case. Repairability improved radically from there—jumping to a 7/10 for the iPhone 3G. And the phones have remained relatively repair-friendly since. The most recent iPhone offering, the iPhone 7, earned a respectable 7/10 on our scale in 2016.

You can see the full set of teardown photos over at iFixit.