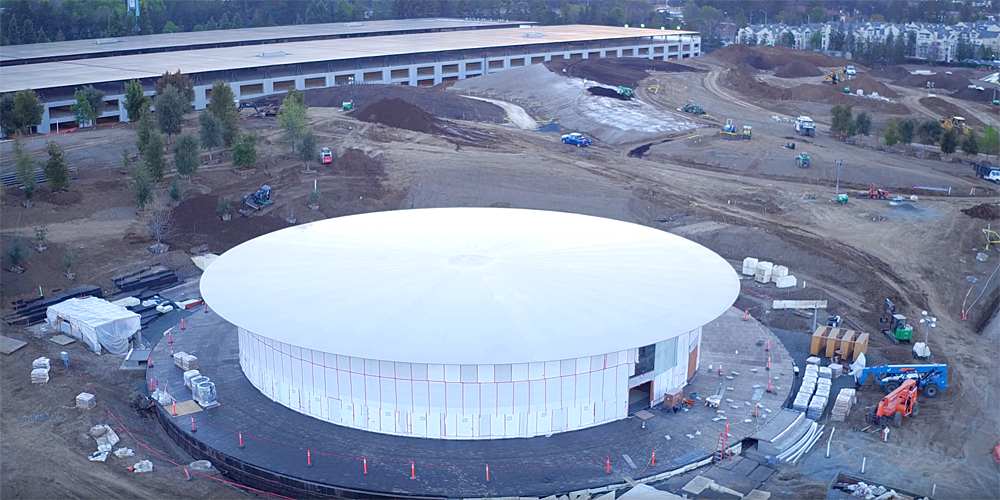 The latest drone footage of the Apple Park construction progress is in, and it makes an iPad event in the Steve Jobs Theater seem unlikely. We can only now be a matter of weeks away from the event, and there appears to be just too much mess – and too many potential hazards – for Apple to risk having 1,000 people wandering through the site.

The footage starts by giving us a little peek into the twin tunnels leading into the site. Construction work here is still very much in evidence, with barriers, scaffolding, containers and more inside them.

Vehicles and equipment still surround the main spaceship building, on both the exterior and interior, and orange mesh fencing protects the construction team as work continues on the roof.

The shades designed to protect the interior from the sun – part of the passive cooling designed to minimize the energy needed to control temperatures – appear mostly complete on the interior as well as exterior of the ring.

Landscaping work inside the ring is making progress, with more trees in evidence, but there’s still a great deal of bare dirt.

As for the underground theater, there’s no way to know from the footage how much progress has been made on the interior, but certainly the exterior still looks very much more like a construction site than a completed building. The surrounding land is still mostly dirt, with earth-moving equipment still in evidence. Building materials surround the raised platform, and only the roof looks finished.

The small peek we get of the interior seems to show unfinished flooring with plenty of materials still stacked up ready to be fitted.

Apple said that the first staff would be moving in next month, but that work would continue through the summer, and it would take six months to move in all 12,000 employees.

As always, you can keep up to date with all the latest Apple Park news in our guide, with an additional feed devoted to construction progress.