Mobile app analytics firm App Annie is today out with its latest report. As usual, the data shows that Apple’s App Store has a significant lead in terms of revenue when compared to Google Play, but this report notes of a change. The firm estimates that Android will overtake iOS in terms of app revenue this year…

In saying this, there’s one important factor to distinguish: App Annie is saying that Google Play, combined with third-party Android app stores from device manufacturers and the like, will overtake Apple’s own App Store. As for when Google Play by itself is expected to overtake the App Store, App Annie predicts that the App Store will maintain its lead through 2021.

The iOS App Store is projected to remain the single most lucrative app store through the forecast period, generating more than $60 billion in gross consumer spend in 2021. However, the combined consumer spend on Google Play and third-party Android stores is expected to overtake it in 2017 thanks to their dominant smart device market share and strong installed base growth.

The third-party Android app stores brought in $10 billion in revenue during 2016, but App Annie expects that number to double to $20 billion during this year. Those app stores include offerings from Tencent, Baidu, Xiaomi, Huawei, and others. 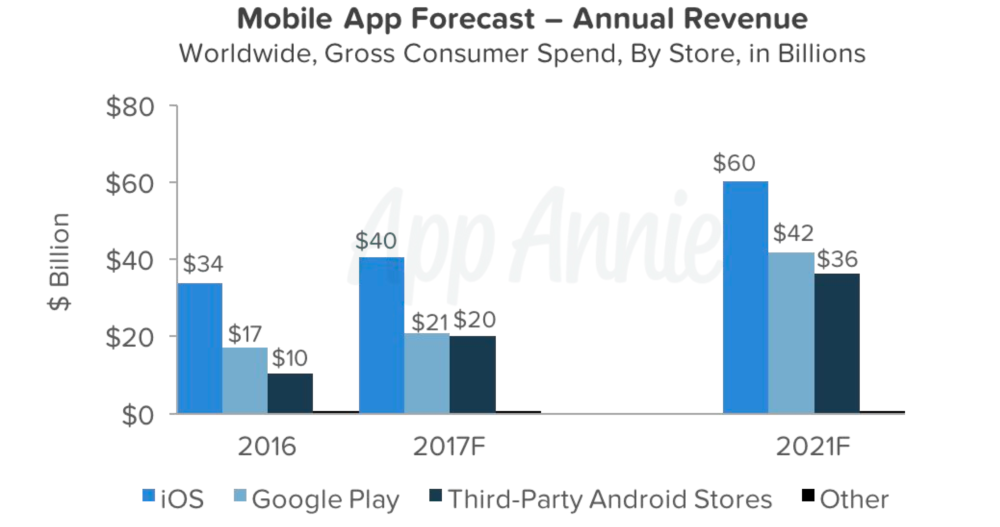 Part of the reason for the growth of third-party app stores on Android is because of the platform’s growth in China and other emerging markets such as Mexico, Brazil, and Indonesia. In terms of revenue, the US, China, Japan, South Korea, and UK are expected to account for 85 percent of revenue during 2021, up from 75 percent in 2016.

While as far as downloads go, China, India, U.S., Brazil, and Indonesia accounted for 54 percent of downloads last year and that number is expected to remain about the same through 2021.

The analytics firm predicts that worldwide app downloads will surpass 352 billion in 2021, while consumer spending across all platforms will crack $139 billion. The App Store is expected to account for a large percentage of that spending, bringing in over $60 billion during 2021 according to App Annie’s estimates.

A wealth of information concerning the app market through 2021 is available in App Annie’s full report. View more details here.