This is the place to catch up on all the biggest product announcements, hardware, apps, synths, Logic/GarageBand instruments and so much more in the world of iOS/Mac music production. This week, Musikmesse 2017 in Frankfurt kicked off with a new flagship synth from Waldorf and Arturia’s all-in-one KeyLab Essential MIDI keyboard controllers for Mac/iOS. We also saw the release of one of the most powerful iOS music apps on the the market with Audiobus 3.

For more details and to see what a $20,000 custom-made synth looks like, head below for all of this week’s top iOS & Mac music production news:

All of the software included and the keyboard itself will work with your Mac right out of the box. It will also connect to your iOS device using the required adapter with no problems at all, according to Arturia.

I am a fan/owner of Arturia’s Mini Brute analog synth and the Beat Step Pro sequencer. So I am defiantly looking forward to getting my hands on this thing.

We really weren’t expecting to see any massive new products announcements in the way of hardware synthesizers at Musikmesse this year, then this happened.

Waldorf is debuting a brand new “flagship” synthesizer known as Quantum this week in Frankfurt. While not much is known in terms of specs on Quantum just yet, we know it is a hybrid digital/analog polysynth with 8-voices, analog filters and more. There are 3 oscillators here with what sounds like loads of sound source possibilities. Each of them can be configured with wavetables (in true Waldorf tradition), typical analog waveforms, a “particle” granular sampler and a “resonator” (resonant filter bank).

Waldorf is yet to update its site with anything more than a few renderings of the new Quantum.

It does appear to be a near knob-per-function setup here, but we are inevitably going to be doing some menu diving with a massive hybrid of this nature. It looks like Waldorf has opted for a pretty high-res touch display to make that a little easier though. The good folks over at Sonic State got a closer look on the show floor at Musikmesse 2017.

Waldorf is currently offering 30% off its plug-ins and instruments right now using code music2017 at checkout. You’ll find things like Largo, Lector, Nave, PPG Wave 3.V or Waldorf Edition 2 all in AU format for Logic and other major DAWs.

Audiobus 3 for iOS is out now!

Audiobus is essentially an app that allows you to connect compatible music apps together, “just like virtual cables”. And it is getting a serious update with Audiobus 3. Major highlights include a completely overhauled MIDI routing system, support for Apple’s Audio Unit extension for iOS, and a series of workflow improvements including a built-in mixer.

Send live audio or MIDI from one Audiobus-compatible app to another: add effects on top of your favourite synth, use your favourite step sequencer to drive the whole lot, and record it all in your favourite DAW, sampler or looper. Plug in a MIDI keyboard, run it through an arpeggiator or a key quantizer, and record the result in your DAW, or drive several different sound generators with a keyboard splitter. The possibilities are endless.

The folks at Audiobus have created a fantastic database of iOS synths and more that support its inter-app routing tech. You can browse through the over 900 different options with proper search filters right here. Cheers guys!

Audiobus 3 is available now for $9.99 on the App Store. AudioBus 2 will remain a separate app and will continue to work in the capacity it always has. 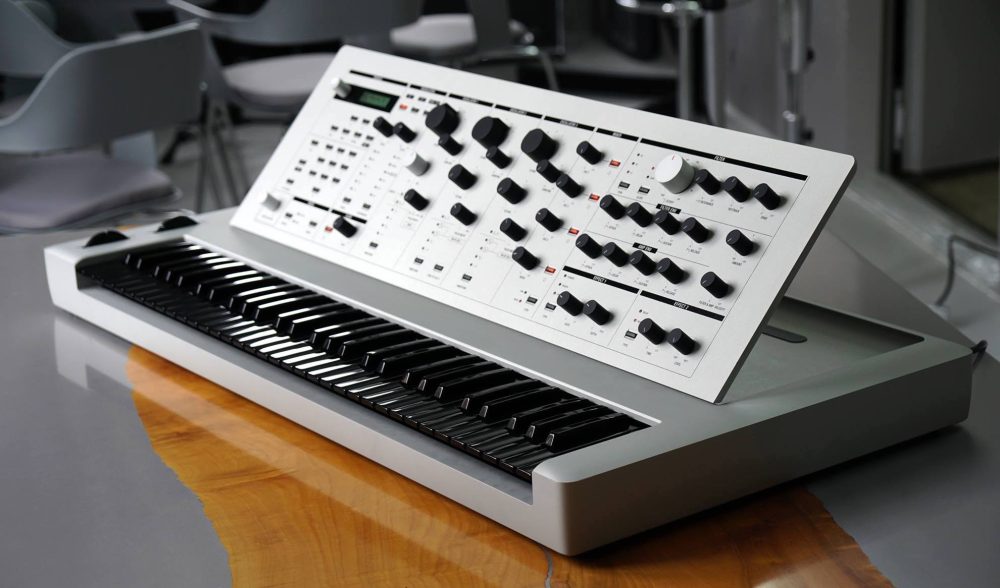 This is what a completely custom $20,000 synth looks like

Well known synthesizer designer Axel Hartmann had a hand in the design of the Waldorf Quantum, but he has also been up to his own (not very) little project on the side as well. To mark 20 years in the business, he decided to create a new synthesizer known as the 20.

This digital beast runs on a slightly modded version of the Waldorf Blofeld engine with hundreds of voices and what are described as very high-end digital-to-analog converters. The entire housing is milled from a single block of aluminum and every element of the physical design (including the pots) are custom-made for this instrument.

If you have $20,000 laying around, you might be able to pick up one of these extremely rare Axel Hartmann 20s. In fact, only about 20 of them will be made.