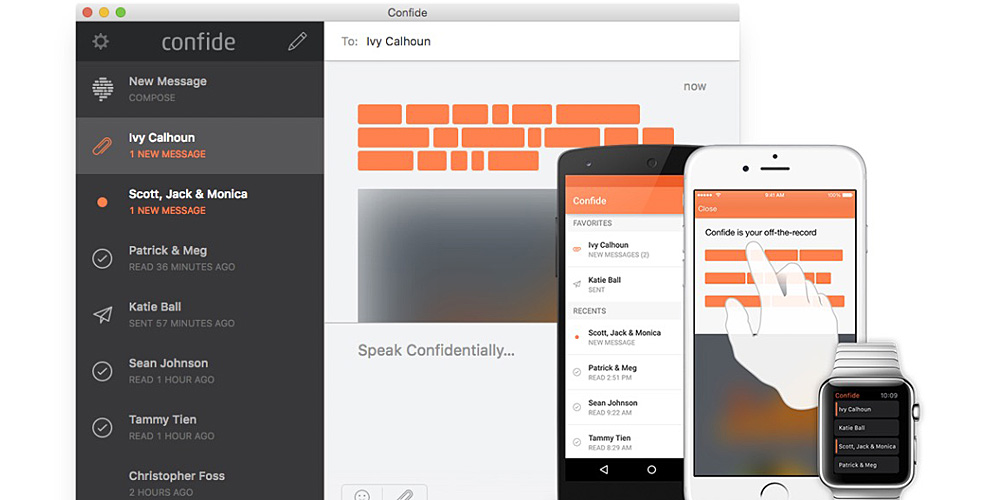 Confide, an app which bills itself as a totally confidential messaging service, is being sued for allegedly failing to live up to its security claims. Used by White House staff, the subscription-based service claims that its disappearing messages are proof against both screenshot and even being photographed …

Messages sent using Confide are transmitted via iMessage, but disappear after being read. If you attempt to take a screenshot on iOS or Android, you’ll just capture a grey box. The sender is also notified that a screenshot was attempted.

Confide also has a feature designed to make it impossible to photograph messages using another phone or other camera.

Our patent-pending reading experience ensures that only a sliver of the message is unveiled at a time and that the sender’s name is not visible.

But a lawsuit filed in New York alleges that these protections don’t work in the desktop apps, reports Re/code.

It’s possible to toggle the settings on Windows so that when using the desktop version of the app, users can take a screenshot of the entire message, along with the sender’s name in full view. The app also fails to alert the sender that someone has taken a screenshot, the suit claims.

The suit further alleges that Confide’s “sliver” feature, which is supposed to only show a portion of the message at a time, and hide the identity of the sender, doesn’t work on the desktop versions of the app.

This allows photos of entire messages – including the sender – to be photographed in the Mac app. The lawsuit accuses Confide of ‘fraudulently inducing consumers to purchase premium subscriptions to its encrypted messaging application that fail to deliver the promised upgraded security features.’

Confide rejects the claims, calling the lawsuit ‘unfounded’ and ‘frivilous.’

Personally, I’ve never understood the appeal of the whole disappearing message thing. With most apps, you can simply take a photo of the screen, and even with Confide’s ‘sliver’ approach you could still video it. But hey, it keeps some lawyers off the streets …