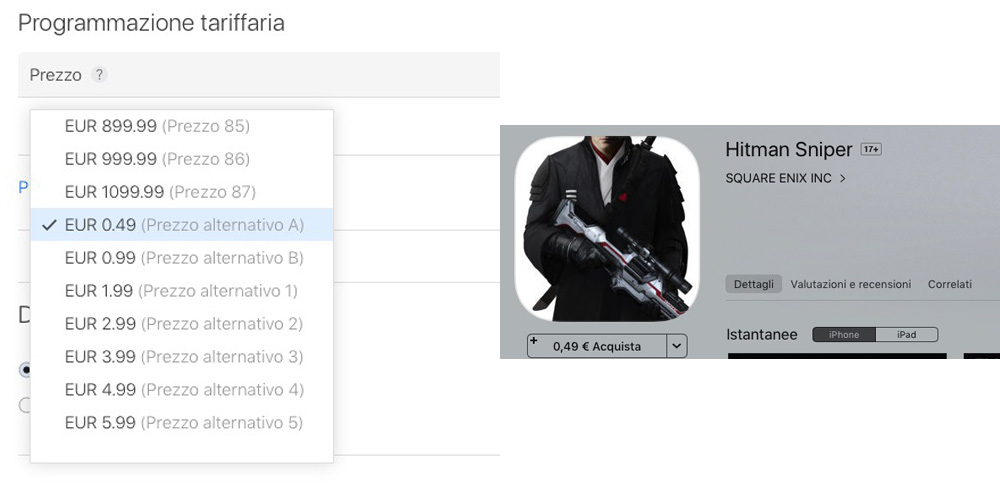 Update: The alternative pricing tiers, which are available to all countries which use the Euro, are confirmed in an Apple document.

Following Apple’s decision to increase the prices of App Store prices in Europe, Italian site iSpazio reports that the company appears to be allowing developers the option of more flexible pricing. Instead of having to choose one of the standard tiers, they would be free to select alternatives – including a starting-point of €0.49 …

If so, this would allow the option of reducing prices for those concerned that the price increase might hit sales.

Apple announced the increases last week, with tier 1 pricing increasing from €1 to €1.09 and corresponding increases in higher tiers. But the site noticed non-standard pricing for a number of apps, including some at 49 cents – with corresponding options in the Connect service used to submit apps. Connect shows a €0.49 option labeled ‘Price alternative A’ and a €0.99 one labelled ‘Price alternative B.’

iPhoneItalia notes that Apple has long offered alternative pricing options in developing markets, including China, India and Indonesia. As of this week, however, it appears that the option is being extended to the 19 Eurozone countries: Austria, Belgium, Cyprus, Estonia, Finland, France, Germany, Greece, Ireland, Italy, Latvia, Lithuania, Luxembourg, Malta, the Netherlands, Portugal, Slovakia, Slovenia, and Spain.

We’ve asked Apple for comment, and will update with any response.

UK customers saw an even greater price increase in January, when Apple increased prices by 25%+ to take account of the dramatic fall in the value of the pound following the Brexit referendum result.