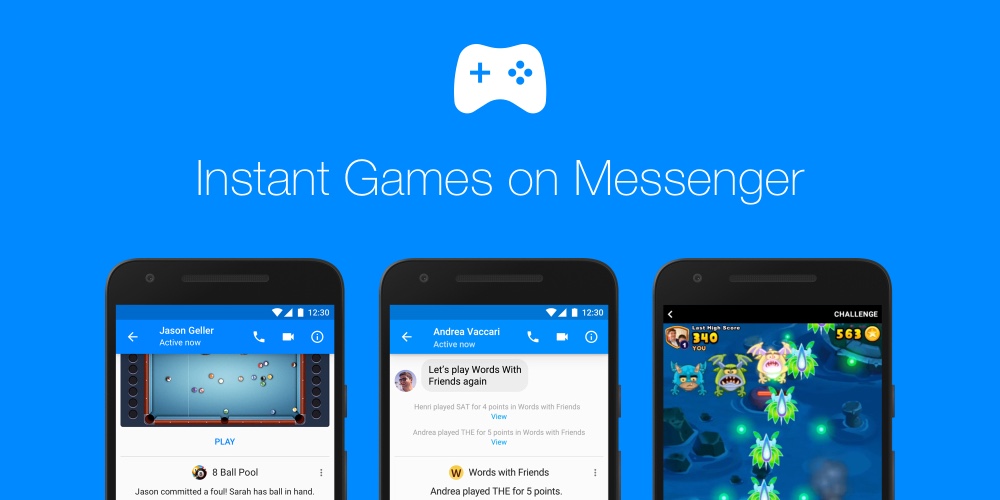 Facebook has begun rolling out its Instant Games on Messenger to worldwide audiences today. Today’s rollout also means that Messenger will be seeing many of the new features announced at Facebook’s F8 conference. The Messenger features will allow developers to create deeper gameplay experiences utilizing the newest APIs within the platform.

Today’s feature release allows users of Messenger to play turn-based games with one another and games can feature leaderboards and tournaments. Game bots within Messenger can help to engage players with options and competitions.

Zynga’s Words With Friends will be one of the first games to utilize the new features. Players will be able to invite and take turns with one another in the famous word game. Blackstorm’s EverWing will use Game bots to keep players competitive as they outrank each other in the leaderboards.

From Facebook’s F8 conference on the new APIs available for Messenger:

By using Connect Player, Choose Context, Sharing, and Customized APIs, developers can now build a variety of games that:

The move to improve Instant Games on Messenger is a direct response to Apple’s own iMessage apps. According to Facebook, 1.2 billion people use Messenger every month. It remains a clear goal for the company to capture more of that audience’s attention. By bringing games like 8 Ball Pool to Messenger, a game available from the iMessage apps App Store, Facebook is directly competing with Apple. Facebook understands it can retain its users by building out an in-app Messenger app store. This circumvents the need to wait for Apple’s own App Store approvals and may even give the company leeway into additional offerings.

Instant Games on Messenger will be rolling out to iOS and Android users over the coming weeks worldwide.