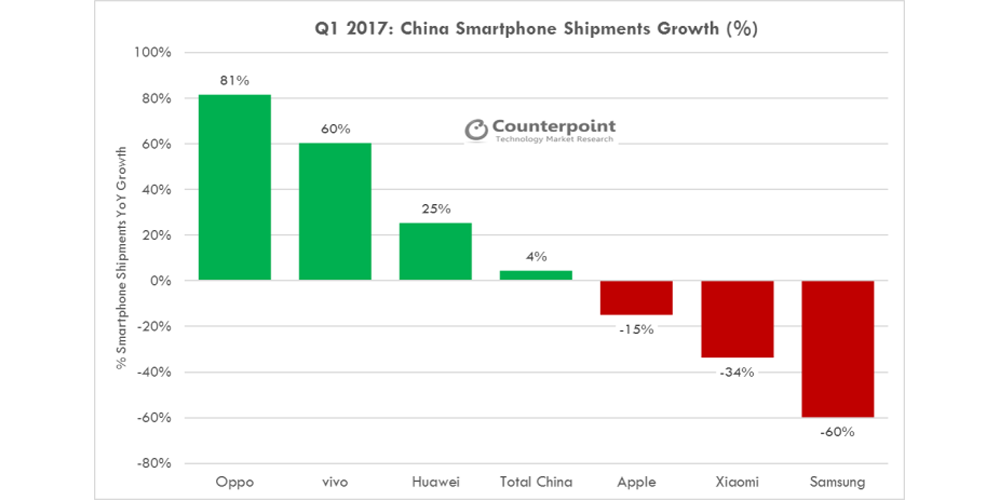 iPhone shipments fell by 15% year-on-year in China during the first quarter of the year according to Counterpoint Research data. Apple saw its market share in the country fall from 12.3% in Q1 2016 to 10.1% Q1 2017.

Oppo saw its shipments soar by 81%, Vivo by 60% and Huawei by 25%. Interestingly, Xiaomi – which has made a business out of copying Apple products – saw its own shipments fall by 34%.

But even Xiaomi wasn’t the worst hit: Samsung shipments fell by a massive 60% year-on-year.

Apple’s slump isn’t surprising when viewed in context. While the Chinese smartphone market as a whole grew by 4%, the fastest growth was for mid-tier handsets below Apple’s price bands.

The mid-tier $100-$199 and $300-399 segments were fastest growing segments, mainly driven by Huawei, Oppo and Vivo […] Apple has not been able to grow at the same pace in this segment which has capped its total-addressable-market to the 4000 rmb or $600+ wholesale segment.

In fact, Apple’s 15% drop is impressive when you consider how the premium smartphone segment has been faring in China.

The premium segment $600+ or 4000rmb remained flat annually but shrunk 33% sequentially. Apple’s share of this super-premium segment remains at 80%, with five out of the top ten model SKUs belonging to Apple. The 4000 rmb and above segment mostly peaks during the Apple iPhone launch quarter and shrinks for the rest of the year.

Within the premium price tier, Apple holds five of the top ten slots – including all of the top four.

Samsung was the only other non-Chinese brand, with the S7 Edge in 8th place.