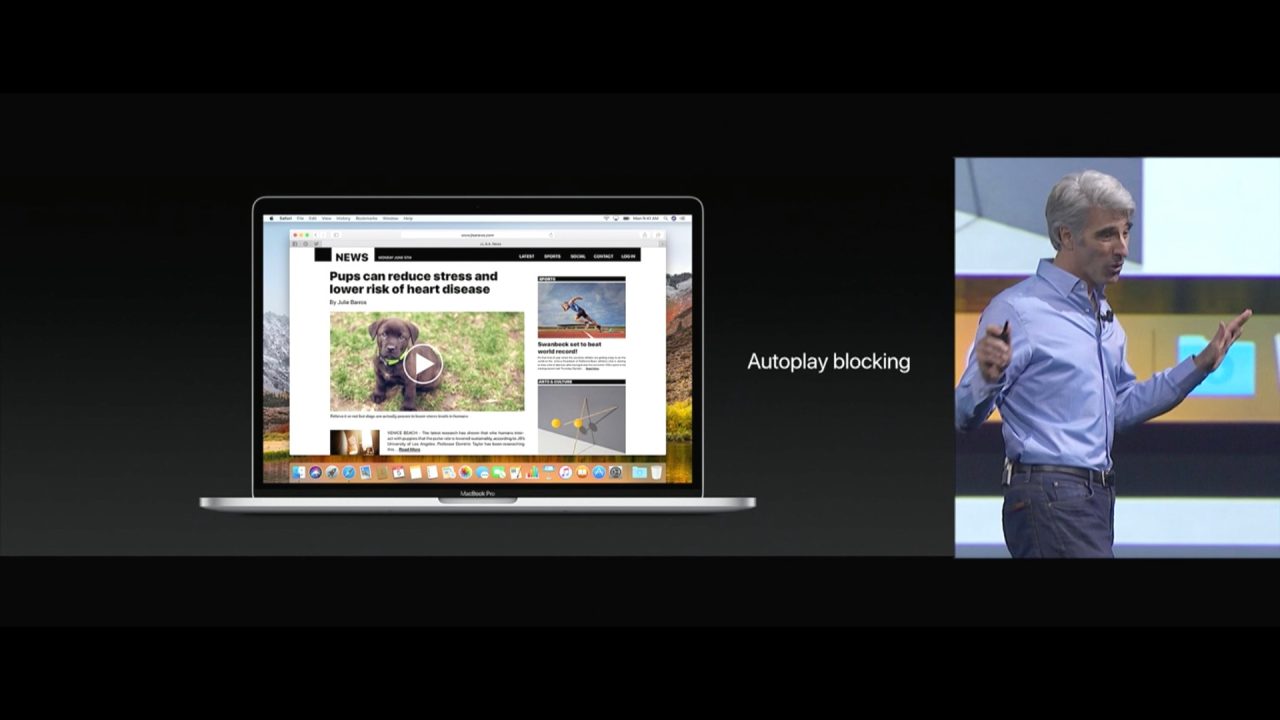 In addition to other announcements, Apple today has unveiled the latest version of macOS in form of macOS 10.13. The update will be available to the public later this year and includes new features, interface tweaks, performance improvements, and more.

macOS High Sierra cares a focus on deep technologies and refinements, according to Craig Federighi, with Apple working to refine macOS 10.12 Sierra with the update.

Apple introduced the latest version of macOS by outlining improvements to Siri that come as part of the update. The company touts that Safari is the fastest web browser there is, and High Sierra only improves that. Safari in macOS High Sierra includes auto-play blocking for video advertisements, as well as intelligent tracking protection to better protect user browsing and history data.

In addition to Safari improvements, macOS High Sierra also bring implements to the Apple Mail app. For instance, the app now supports Top Hits search, making it easier to find emails during search. There’s also finally support for Split View Mail Compose, meaning you can have a split window pane between the compose interface and other applications.

Federighi touts that the biggest updates with High Sierra come with Photos. This includes a persistent sidebar, as well as a new dropdown for filtering content. There are also new editing tools, including interface tweaks for more advanced editing capabilities.

Apple is also bringing its Apple Filesystem to macOS. Federighi demonstrated the advanced capabilities for the new filesystem by instantly duplicating a file. Apple Filesystem first made an appearance earlier this year with iOS 10.3.

macOS High Sierra also migrates the operating system to h.265 from h.264. This upgrade brings 40 percent higher compression without compromising quality, which means video files will be smaller in size and easier to manage.

Finally, Apple says that macOS High Sierra brings a host of graphics improvements to the Mac as it doubles down on the Pro market. High Sierra includes the new Metal 2 graphics engine, bringing 10x improvement over Metal 1 in graphics.

macOS High Sierra will be available to developers later today and to the public later this fall.

Support for industry-standard HEVC (H.265) enables video streaming and playback of 4K video files at incredible quality that are also up to 40 percent smaller than with the current H.264 standard.* With HEVC, Apple is enabling high-quality video streaming on networks where only HD streaming was previously possible, while hardware acceleration on the new iMac® and MacBook Pro® deliver incredibly fast and power-efficient HEVC encoding and editing.

Metal is the fastest, most efficient way to tap into GPU power on the Mac. Metal 2 features a refined API and improved performance that help developers accelerate their apps. It adds support for machine learning used in speech recognition, natural language processing and computer vision. The combination of Thunderbolt 3 and Metal 2 allows the most demanding users to access powerful external GPUs. An External Graphics Developer Kit gives developers all the hardware and software they need to optimize their apps.

Drawing on the performance of Metal 2 and the latest Mac hardware, macOS High Sierra adds support for VR content creation for the first time, enabling developers to create immersive gaming, 3D and VR content on the Mac. Leading VR companies are joining Apple to drive VR innovation on the Mac with features coming later this year — Valve is optimizing their SteamVR platform for macOS and enabling connection of the HTC Vive headset, while Unity and Epic are bringing their VR development tools to macOS. Also later this year, Final Cut Pro® X will add support for professional 360-degree workflows with the ability to import, edit and export 360-degree video.

Photos in macOS High Sierra adds a new always-on sidebar that presents albums and organization tools. A redesigned Edit view includes powerful new tools like Curves, for fine-tuning of color and contrast, and Selective Color, for making adjustments within a defined color range. Live Photos™ can now be edited with fun effects and Memories curates user photos and videos around several new topics. Photos now supports external editors, so Photoshop, Pixelmator and other apps can launch directly within Photos, with edits saved back to the Photos library. And for the first time, support for third-party project extensions gives users access to printing and publishing services, such as Animoto, ifolor, Shutterfly, WhiteWall and Wix, from right within the Photos app.

• Safari can automatically use Reader to open articles in a clean, uncluttered format, while Autoplay Blocking stops media with audio from automatically playing in the browser.

• Mail search gets faster and easier with Top Hits, which puts the most relevant results at the top of a user’s message list.

• Siri® on the Mac responds with a natural and more expressive voice, and when using Apple Music®, it learns music preferences, creates custom playlists and answers music trivia.

• Notes adds simple tables, where a user can type in cells, make edits and move rows and columns.

• Spotlight® provides flight status information, including departure and arrival times, delays, gates, terminals and even a map of the flight path.

Registered Apple Developer Program members can get everything they need to optimize their apps for external graphics with the External Graphics Developer Kit for $599 (US). It includes a Thunderbolt 3 external PCI expansion chassis, AMD Radeon RX 580 graphics card with 8GB VRAM and USB-C hub.