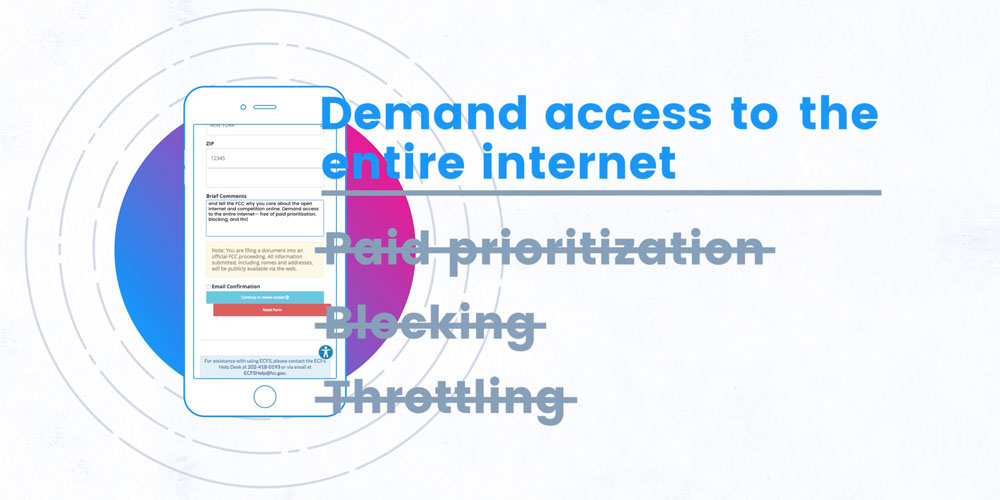 It’s not often that a huge list of tech giants get together to speak with one voice, and it’s even more remarkable when they are protesting legislation which could actually benefit them, but that’s what’s happening today. A Day of Action has been called to ask the FCC to retain net neutrality rules.

Amazon, Dropbox, eBay, Facebook, Google, Microsoft, Netflix, Reddit, Snap, Spotify and Twitter are just 11 of the 40 tech companies encouraging you to have your say. Sadly, Apple isn’t among them …

Net neutrality means that internet service providers have to treat all websites and Internet services equally. They can’t take payment from some sites, speeding up their traffic, while slowing down traffic to the rest of the web. They also can’t take money from one service to block traffic to a rival one. But under proposed FCC changes, they would be free to do both.

You might think the problem is easily circumvented by using a VPN service (I use this one), which means ISPs can’t see which sites you are accessing – but few do this, so there’s a broader issue. Poorer connections to most of the web hampers competition. Imagine a startup wanting to challenge established players but only being able to deliver a poorer service because it can’t afford to bribe ISPs to include it in the fast-track service it offers to the big boys. The end result is less choice for consumers in the services they use.

The 40 companies calling on you to support net neutrality are ones that could afford to pay for prioritized traffic, but it’s not a kind of world they want to see – as Google said in a blog post today.

The net neutrality rules that protect the open internet are in danger of being dismantled. Internet companies, innovative startups, and millions of internet users depend on these common-sense protections that prevent blocking or throttling of internet traffic, segmenting the internet into paid fast lanes and slow lanes, and other discriminatory practices. Thanks in part to net neutrality, the open internet has grown to become an unrivaled source of choice, competition, innovation, free expression, and opportunity. And it should stay that way.

Apple has been surprisingly quiet on the issue, though Tim Cook did discuss the topic with German Chancellor Angela Merkel a couple of years ago.

You can have your say on the FCC website (click the ‘+ Express’ link). It’s a somewhat formal-looking document, asking for the ‘Name of Filer’ rather than the friendlier ‘Your name,’ but takes just a few minutes to complete. We encourage everyone to do this. Note that you need to confirm your post on a second page.

Check out the video below for a quick briefing on the problem.