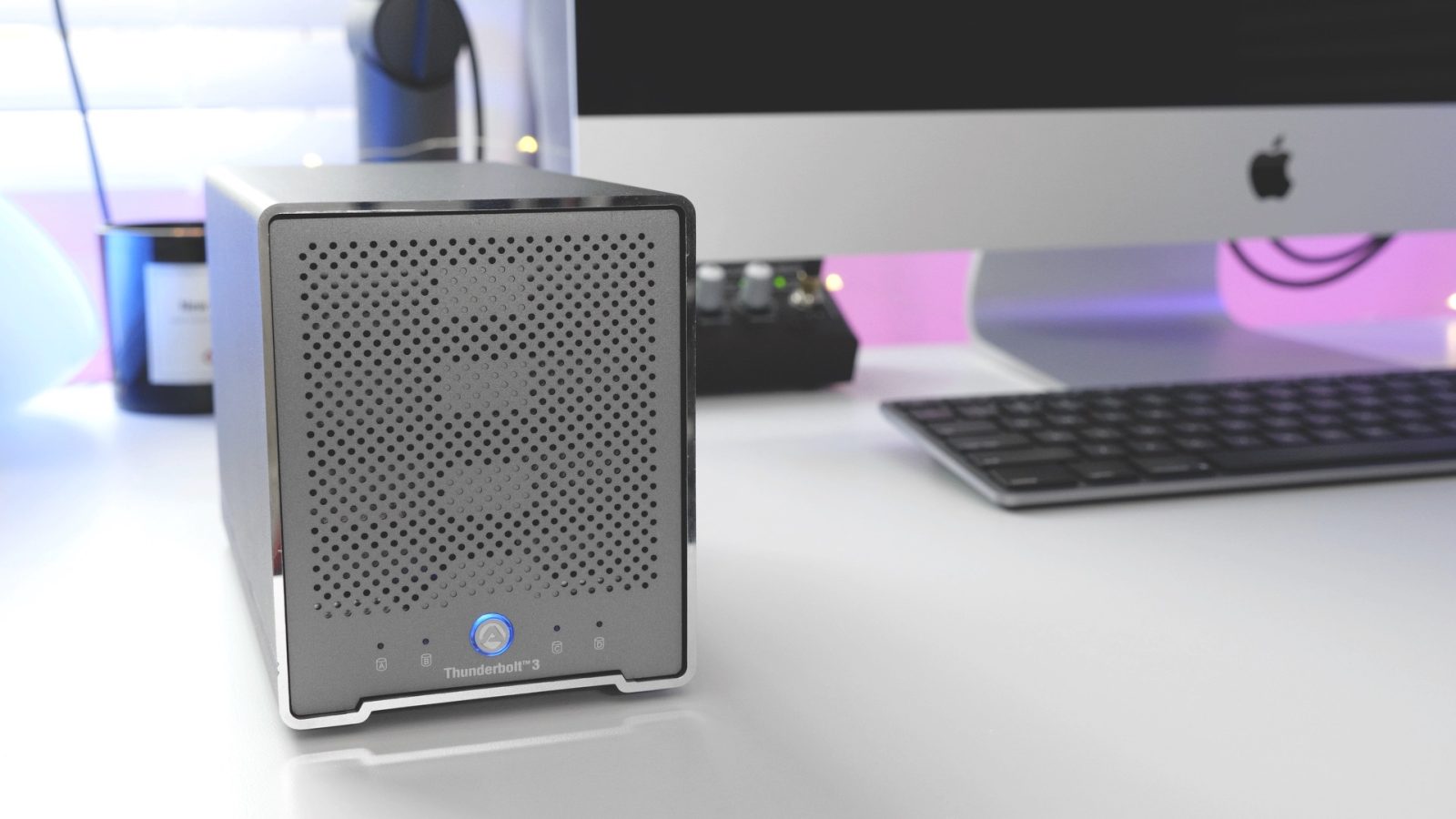 Last year I went hands-on with a few Akitio Thunderbolt 3-enabled drive enclosures for 9to5Mac, but none of the previous enclosures came with out-of-the-box support for macOS. Instead, users had to rely on a hack in order to enable support for these enclosures, due to the fact that macOS wasn’t compatible with the Thunderbolt 3 chipsets being used.

In today’s world, things are a bit different. Much of the Thunderbolt 3 hardware shipping today is no longer “Windows only”, which is a great thing for recent MacBook Pro and Mid-2017 iMac hardware with Thunderbolt 3 I/O capabilities.

Akitio’s Thunder3 Quad Mini is one such example of Thunderbolt 3-enabled hardware made with the Mac in mind. This four-bay enclosure comes with two Thunderbolt 3 ports in a small aluminum enclosure that supports passive cooling for noiseless operation. In other words, it’s a quiet enclosure that’s perfect for RAID 0 SSD setups for maximum speed. Have a look at our hands-on video walkthrough for more details.

At 7.52 x 3.78 x 4.53-inches, the Thunder3 Quad Mini is very compact, especially when you consider that it’s capable of housing four drives. Akitio rightly plays up the Quad Mini’s portability, but as a mid-2017 iMac user, I was particularly excited about the prospect of using it with my Thunderbolt 3-enabled desktop machine. 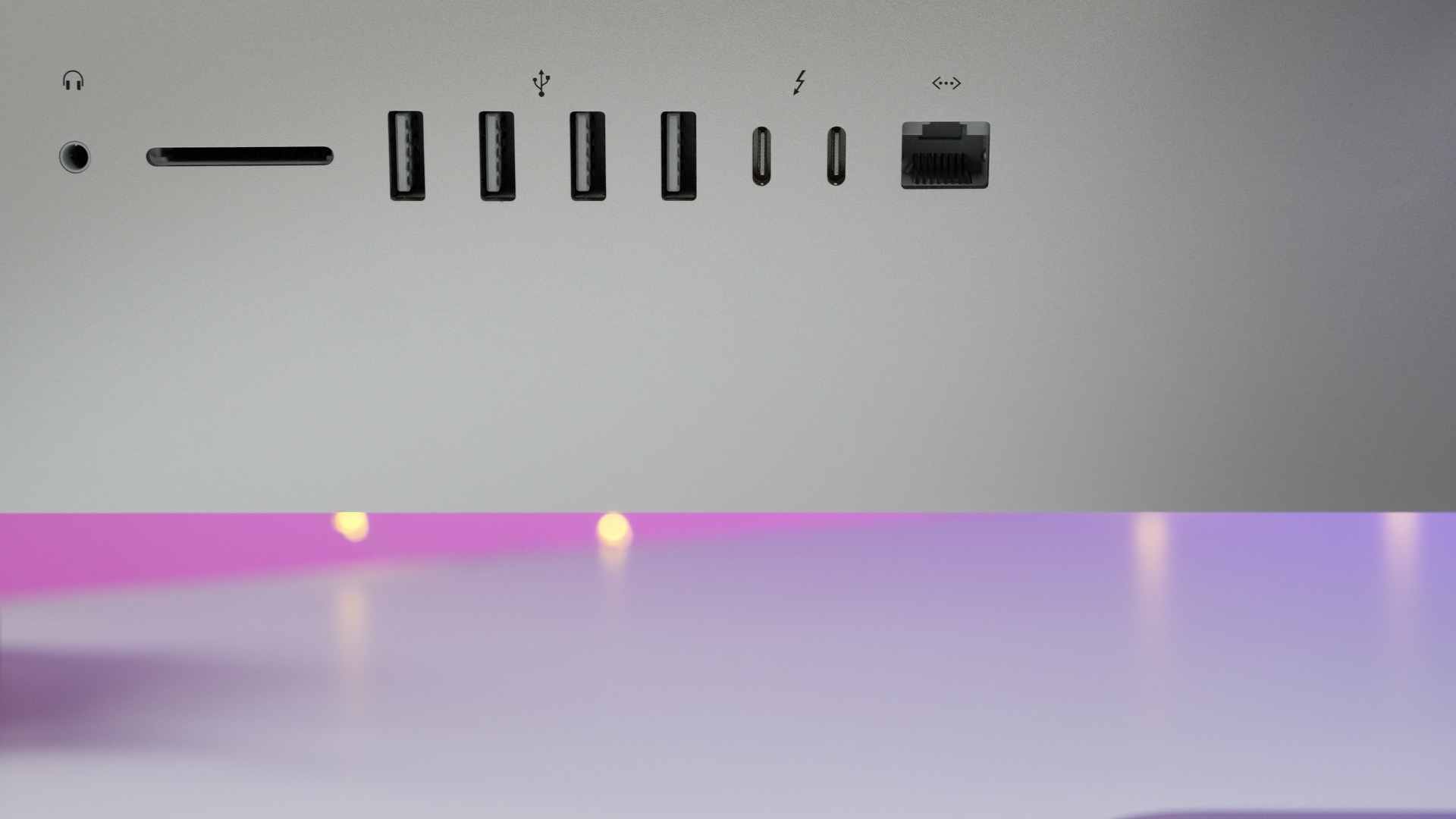 Even though the device is quite svelte, I think it may be an even better fit for iMac users due to the fact that it’s not bus-powered and requires connecting the included AC adapter. Thus placing it next to a desktop iMac presents no issues with managing the extra power adapter like it may for certain streamlined MacBook Pro setups. 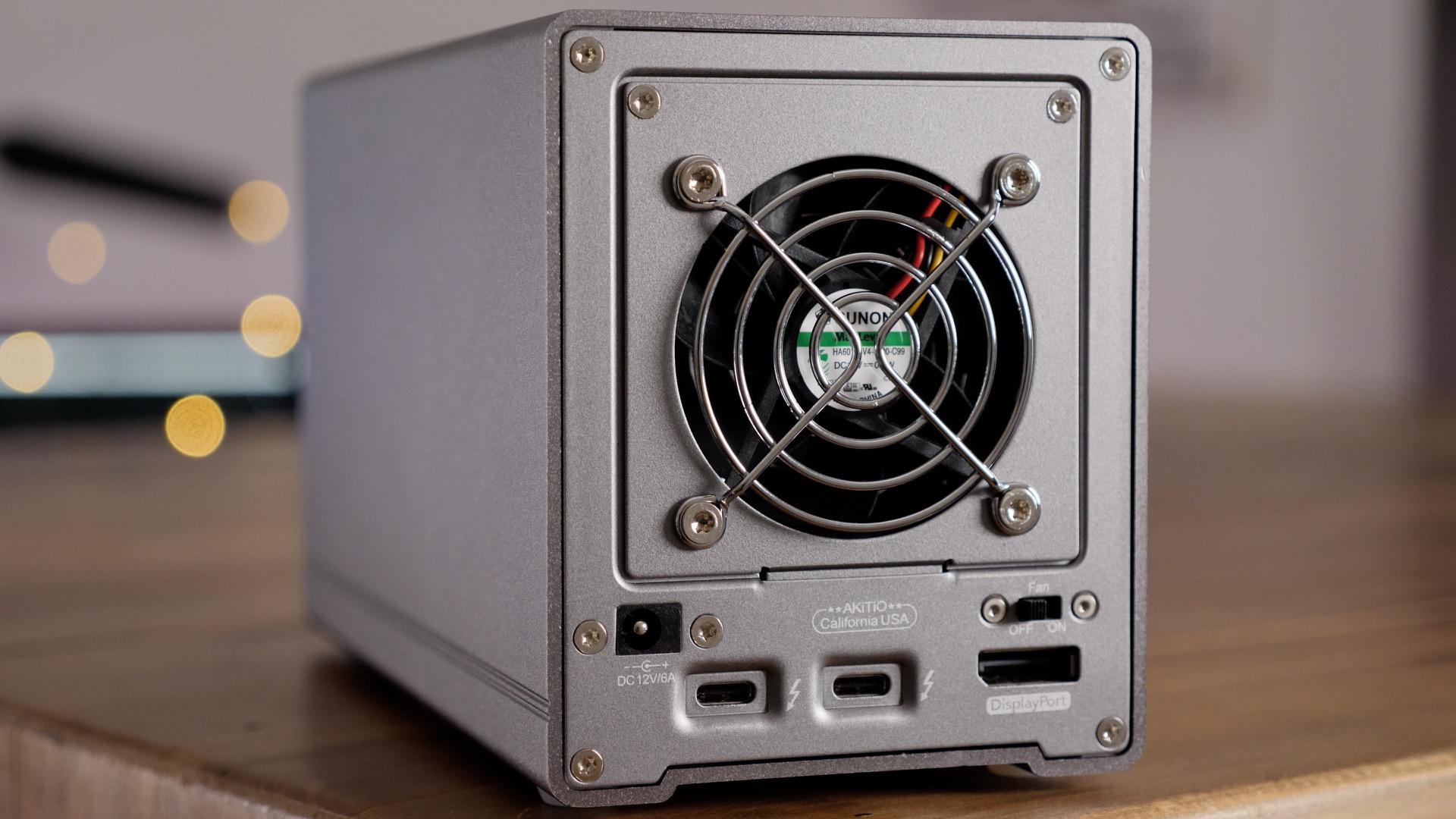 Another point to consider is power delivery. Oftentimes, MacBook Pro users connecting to Thunderbolt 3-enabled devices will expect full speed power delivery, whereas Akitio’s Thunder3 Quad Mini is only capable of delivering 15W of power at a time. That’s enough to help your MacBook Pro tread water, but don’t expect it to charge your Mac to any reasonable degree while in use. 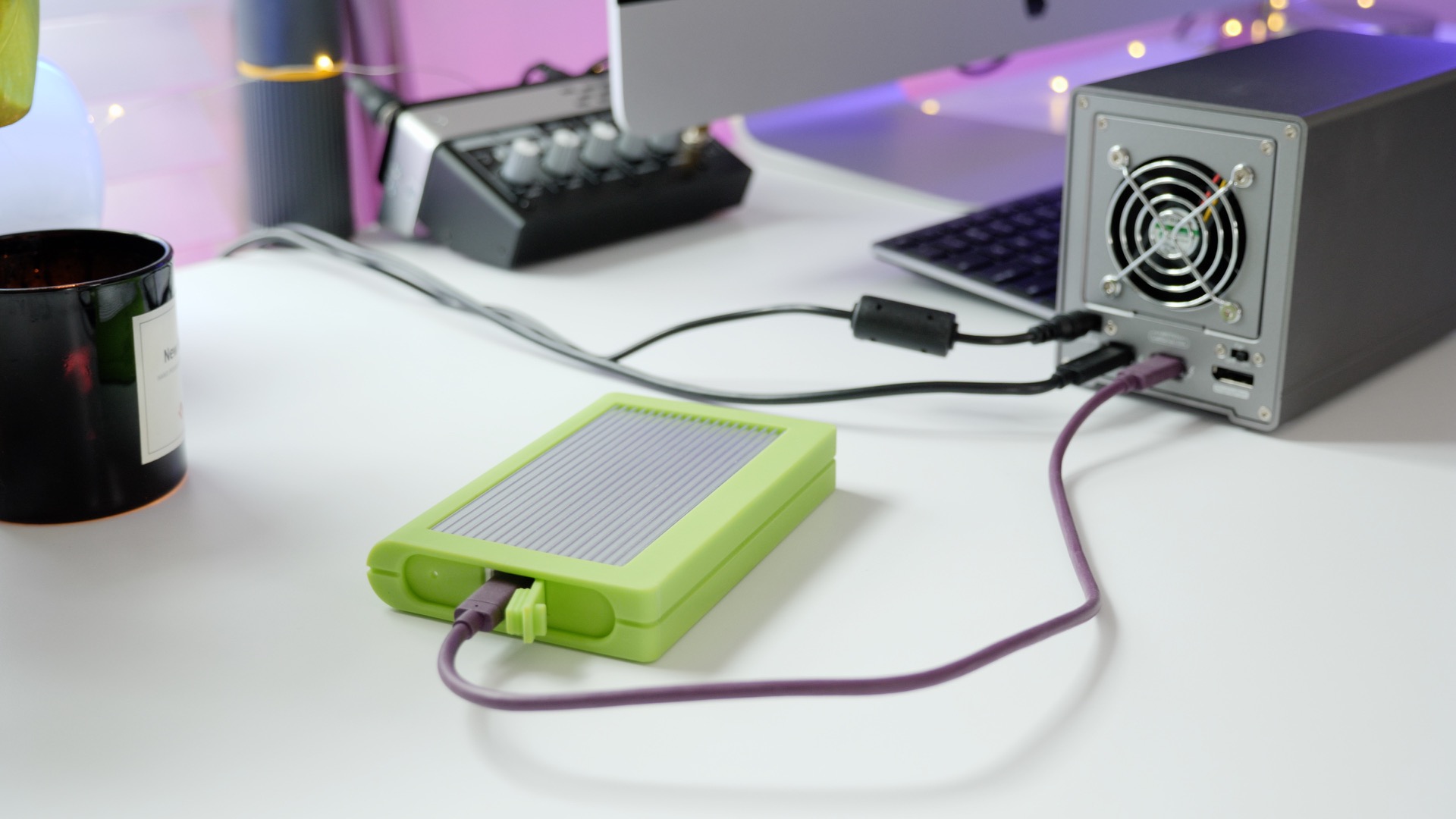 As an owner of an entry-level 5K iMac with Fusion Drive, I was keenly interested in using the Akitio Thunder3 Quad Mini as a RAID 0 boot drive. This would provide me with tons of storage space when using multiple 1TB SSDs and much faster write and read speeds (up to 1375 MB/s with four striped SSDs) when compared to the internal Fusion Drive. It’s basically a way to upgrade my boot drive without cracking open the iMac and thus voiding my warranty. The presence of Thunderbolt 3 means that there is more than enough bandwidth to spare for even the fastest drive solutions out there, along with the additional bandwidth required by a 4K display connected to the DisplayPort output. 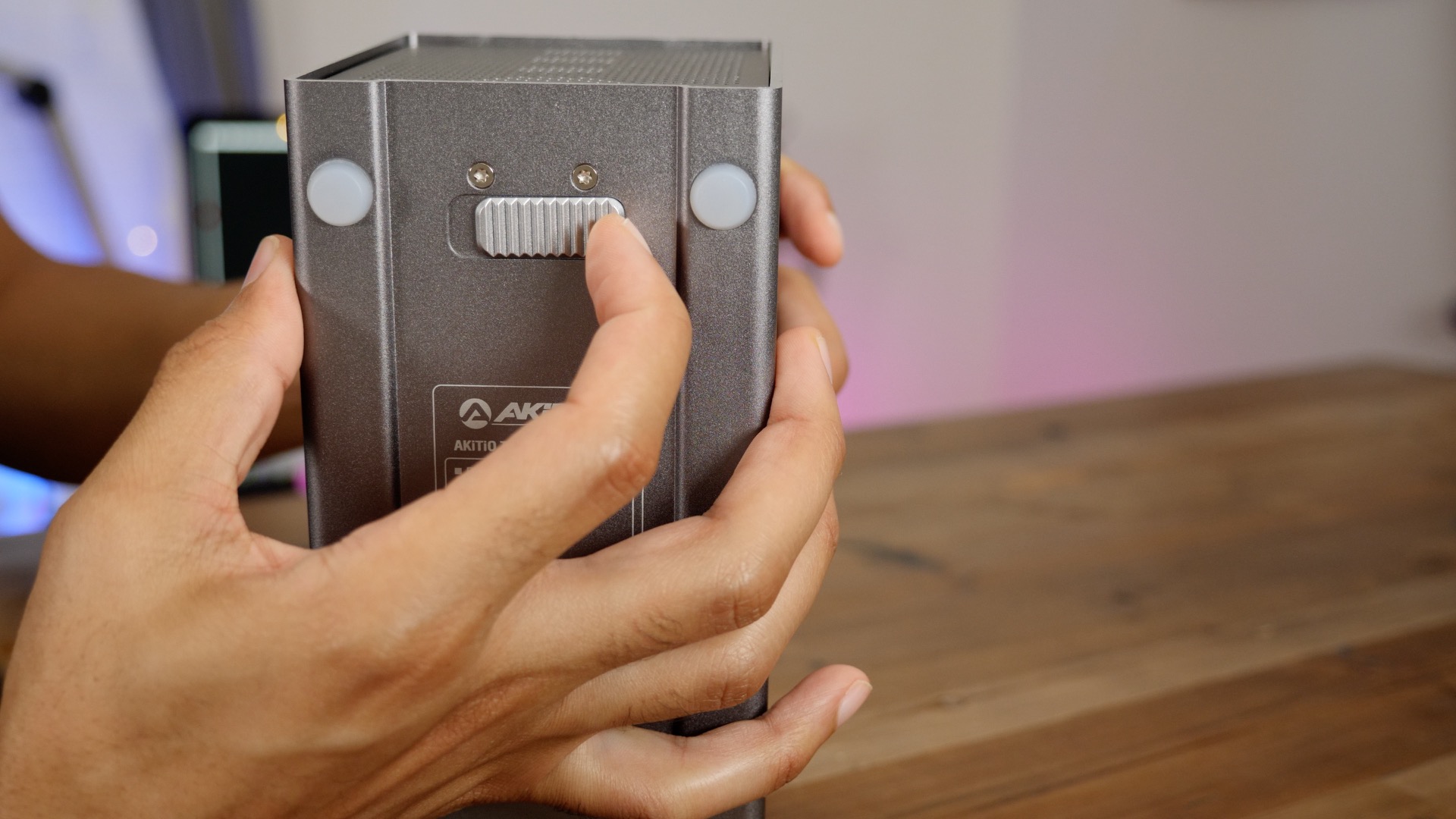 One downside to consider when using a software RAID boot drive solution is that macOS doesn’t easily support FileVault encryption for these types of setups. There are some hacks that may be employed to get encryption working on software RAID, but you won’t be able to go to System Preferences → Security & Privacy → FileVault and flip a switch in order to do so.

Most Akitio Thunder3 Quad Mini users will probably use the enclosure as supplementary external storage anyway, so I don’t imagine the issue with encrypting a RAID boot drive will be a very prevalent one. 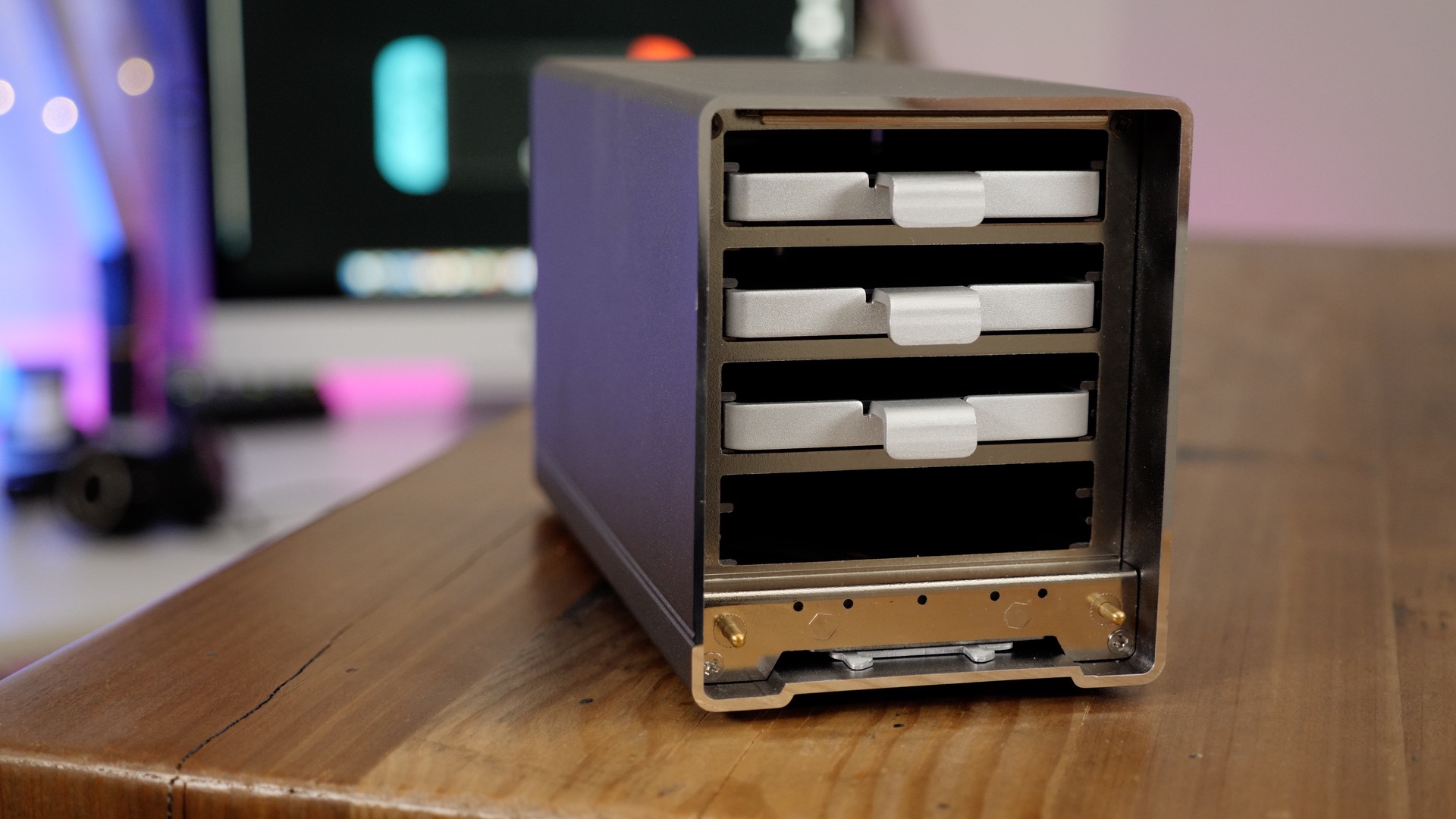 If you do use RAID 0 for maximum speed, keep in mind that the more drives you add to the RAID array, the higher the potential for a failure. If one drive in a RAID 0 array fails, then all of the data is lost since that data is striped across all drives. It’s not the most ideal configuration for mission-critical setups, which is why I wouldn’t recommend RAID 0 for something so important. 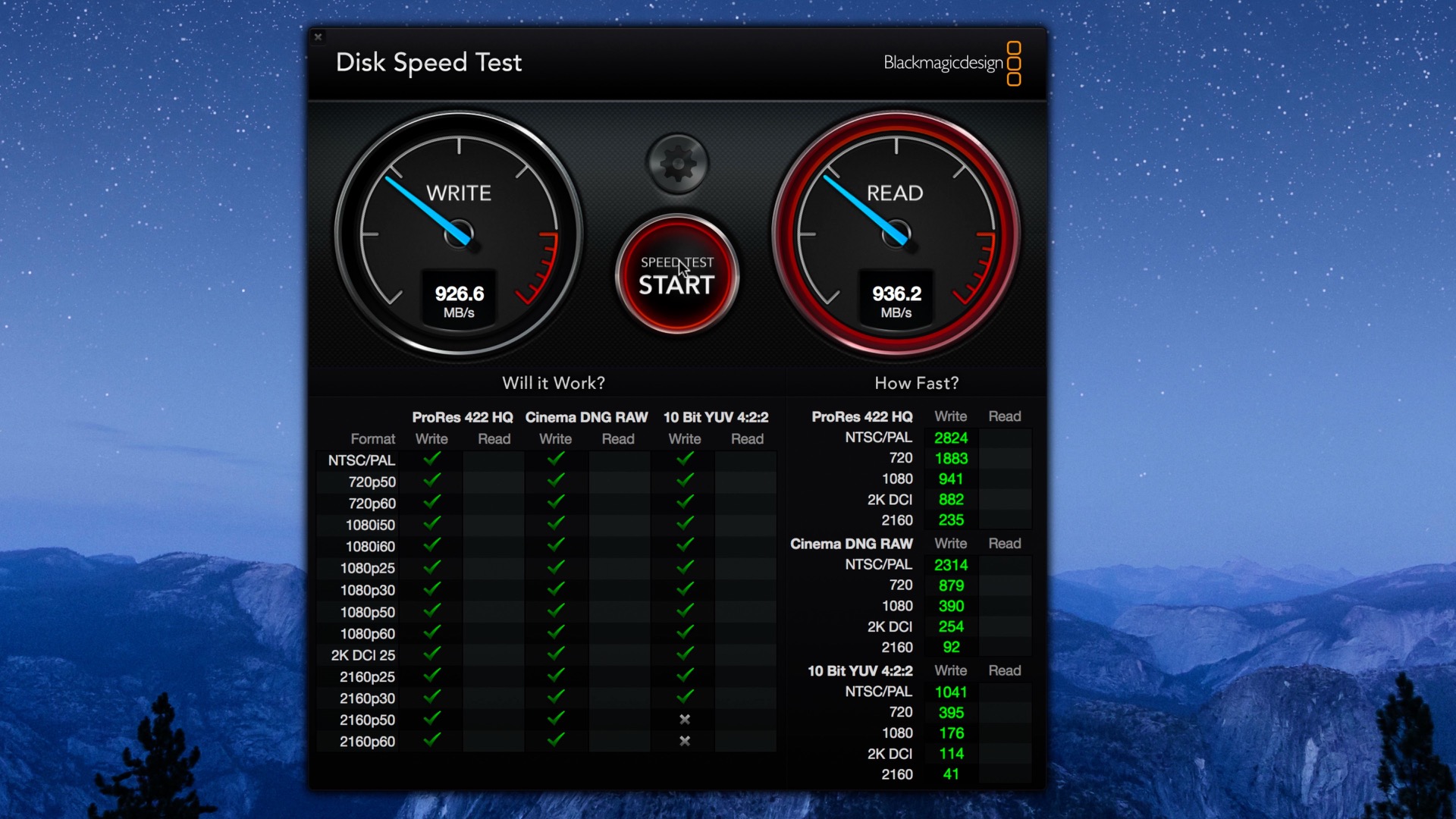 With that said, SSDs are much more reliable these days, and I keep plenty of backups, so for my personal setup it’s a risk I’m more than willing to take. The amount of speed and storage capacity that you get from such a setup is wonderful, especially when compared to the stock Fusion drive inside of the entry-level iMac.

Yet, even if you decide against using RAID 0, it’s still extremely convenient to have a desktop-accessible 2.5-inch 4-bay SSD enclosure that can address such a large amount of fast storage on solid state media.

One of the nicest features included with the Thunder3 Quad Mini is the external fan switch that allows the unit to work in 0dB silent mode. If you’re using traditional spinning hard drives, then you’ll likely want to keep the fan enabled, but if you’re utilizing SSDs then it makes more sense to consider disabling the fan. I noticed that the unit can get fairly warm amid intense conditions, like copying large files, or working with media in Final Cut Pro X, so you’ll have to decide how comfortable you are with leaving the fan disabled. 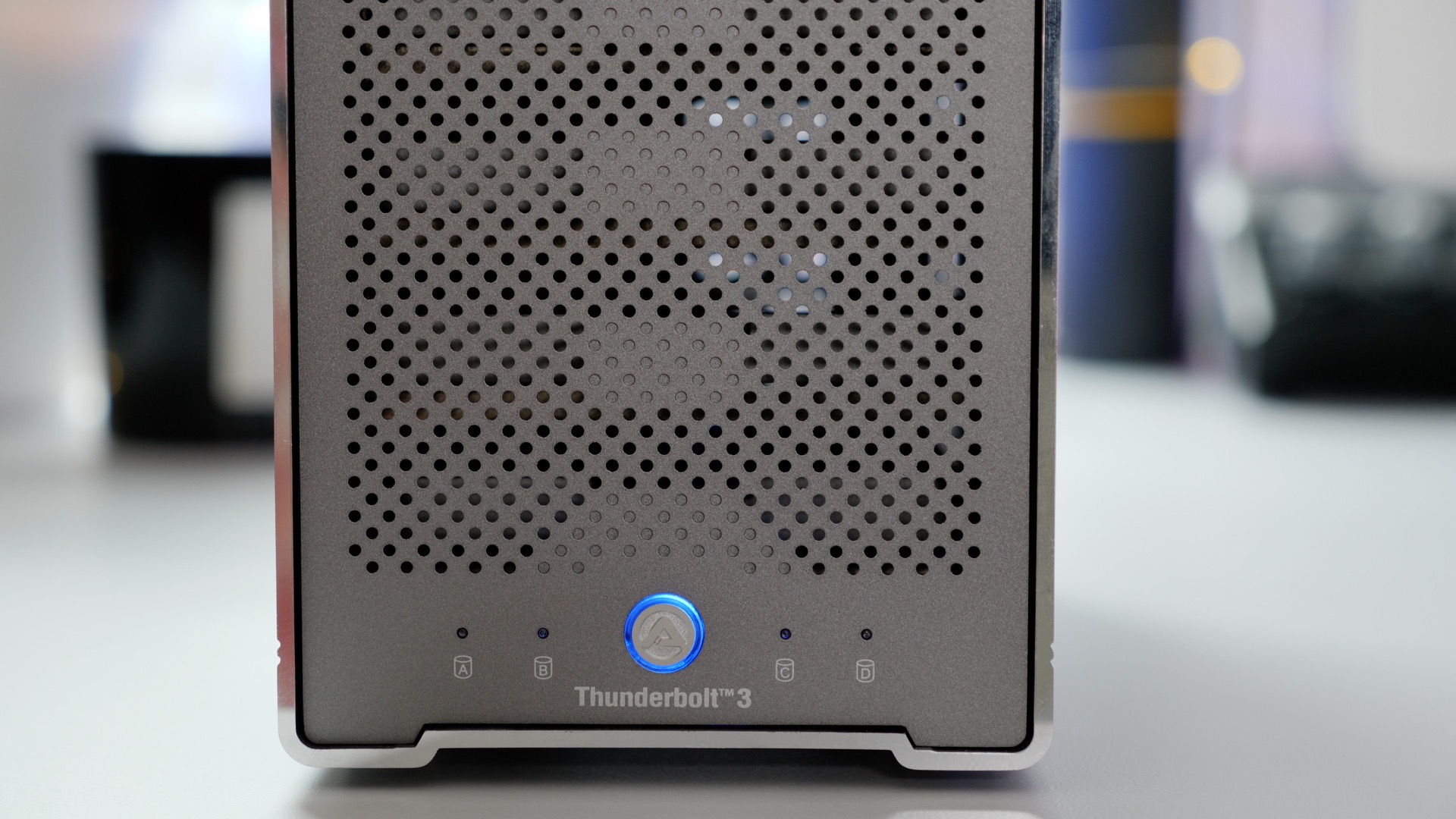 Akitio includes a free Thunderbolt 3 cable inside the box, but I definitely recommend opting for a longer cable. The included 0.5-meter cable doesn’t provide enough slack for most setups in my opinion. For example, the cable won’t even reach the Thunderbolt 3 ports on my iMac when the enclosure is placed on the left side of computer. MacBook Pro users might have more flexibility, since more ports are offered on each side of the machine, but 0.5 meters still isn’t long enough if you ask me. 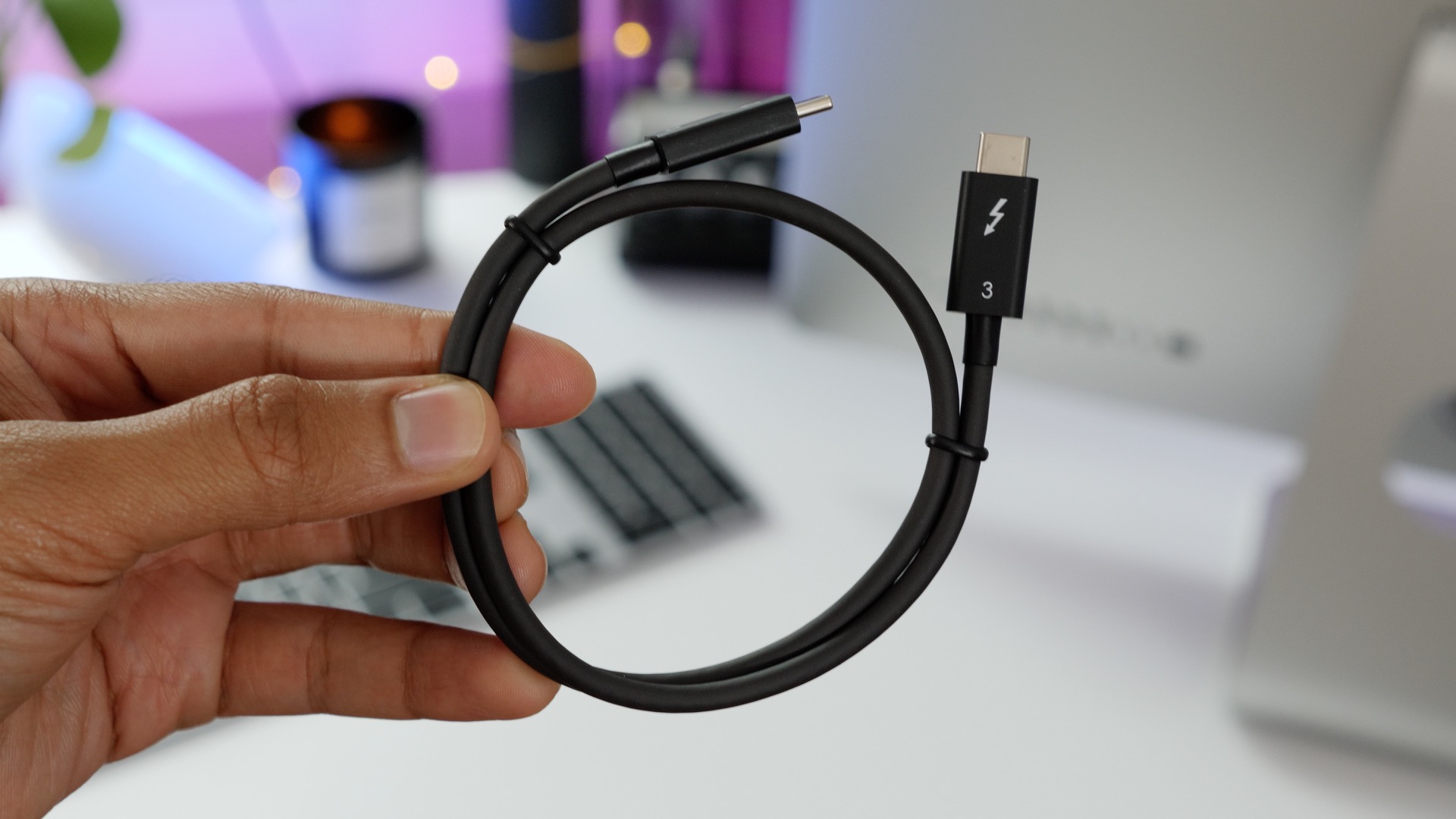 It’s nice to have an included Thunderbolt 3 cable, but the cable is quite short

[Note: Akitio provided me with a replacement adapter and this has resolved the issue described below.]

Something that I noticed after finishing my hands-on video is that the power connector included with the unit emits a noticeable whine. It’s not loud enough to where you may hear it in a noisy environment, but I can definitely hear it in a silent environment. 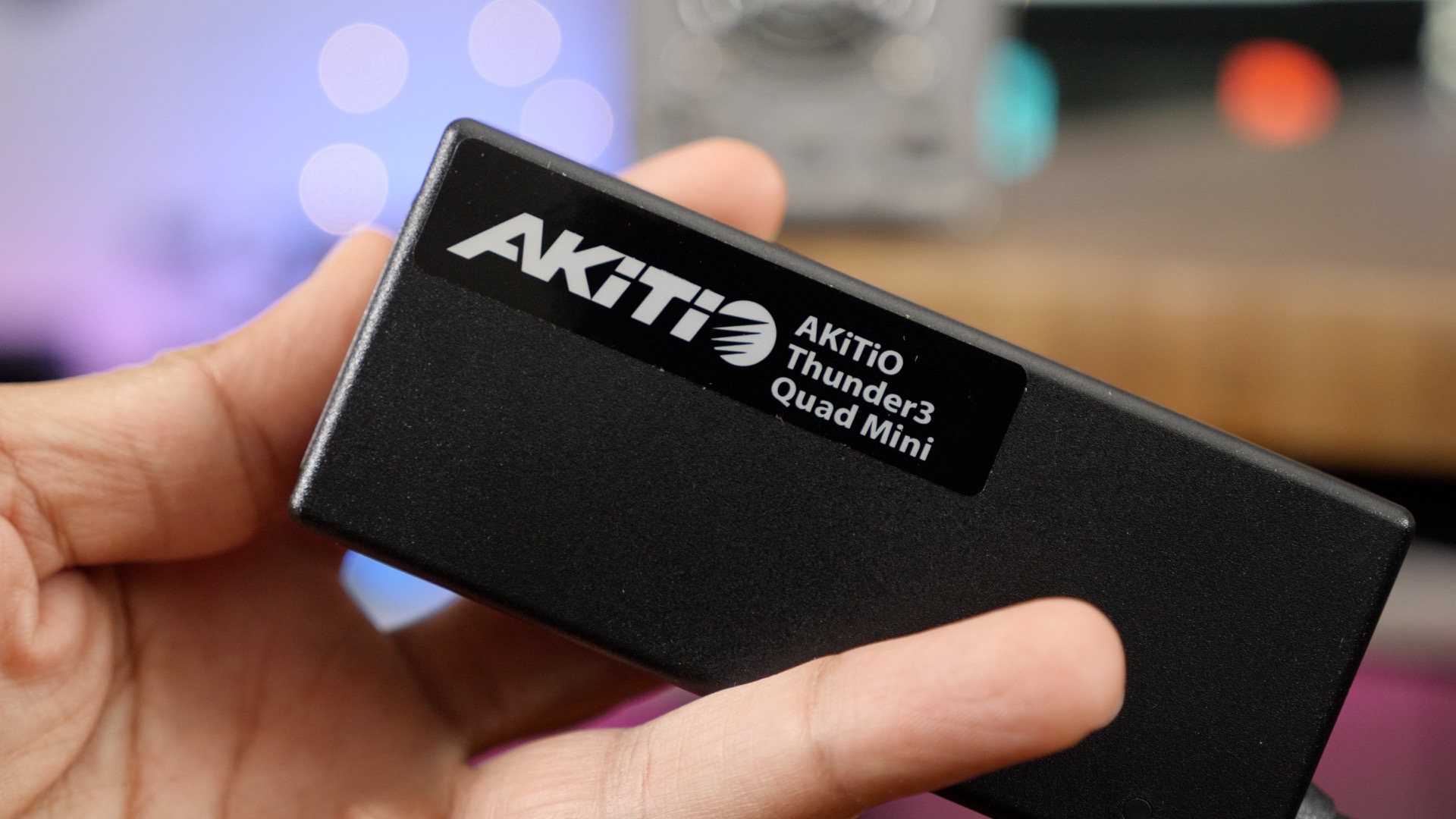 I’m not sure if this is just a one-off with my particular power adapter, and I’ve reached out to Akitio for clarification/replacement power adapter. I’m very sensitive to high frequency noises, so it could just be me, but I thought it was worth warning you about just in case this isn’t a one-off. I’ll update this post once I hear back from Akitio.

If you own a Thunderbolt 3-enabled Mac, and need an external storage solution, then Akitio’s Thunder3 Quad Mini is worth considering. The $329 device is available for purchase now and provides fast, expandable storage in a very attractive, all-aluminum compact form factor.

The Thunder3 Quad Mini may not be the perfect solution for your needs, considering that you’ll need to enable RAID 0 and have access to four SSDs to get the most out of the device, but it’s great to finally have such an option available to Mac users. Be sure to watch our full hands-on video walkthrough above for more details, and sound off down below in the comments with your thoughts and observations.