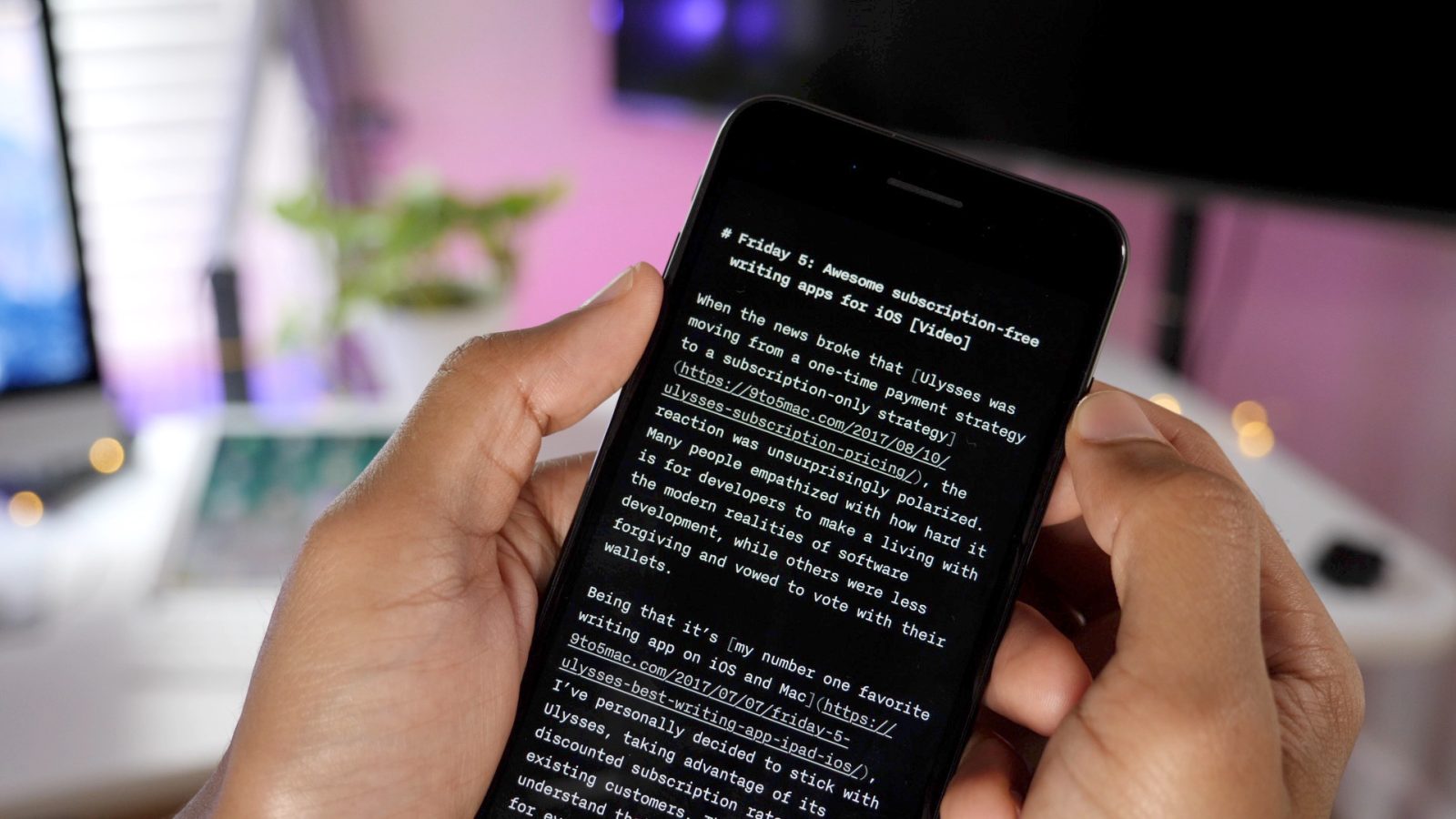 When the news broke that Ulysses was moving from a one-time payment strategy to a subscription-only strategy, the reaction was unsurprisingly polarized. Many people empathized with how hard it is for developers to make a living with the modern realities of software development, while others were less forgiving and vowed to vote with their wallets.

Being that it’s my number one favorite writing app on iOS and Mac, I’ve personally decided to stick with Ulysses, taking advantage of its discounted subscription rate for existing customers. That said, I understand that subscriptions are not for everyone, and there will be a point in most of our lives where piling on subscription after subscription proves to be unsustainable from a financial perspective.

In this week’s Friday 5, I discuss five more of my favorite universal writing apps for iOS. To qualify for this list, each app must feature a one-time purchase and no additional subscription fees. These apps also support Family Sharing, and as of this writing, feature no additional in-app purchases. Have a look at our video walkthrough inside for a brief hands-on look.

This $4.99 app is one of my favorite iOS writing apps because of its Markdown support, and clean interface. There’s built-in iCloud Drive support, but Dropbox syncing is an option as well. 1Writer also features the ability to add custom URL and JavaScript actions, or select from a pre-built library of actions to process your written text.

But one of the most unique features contained within 1Writer is its built-in browser. The browser allows you to preview links without leaving the app, and even lets you add bookmarks for frequently-visited sites. The browser is handy for conducting research, and you can even copy and paste Markdown-formatted text from the web.

Literature and Latte’s Scrivener is a legendary writing app for the Mac that, after a long time in the oven, finally received an iOS version last summer. The app shares a few similarities with Ulysses, particularly how it accommodates long-form writing. But Scrivener stands on its own as a writing app geared towards working on individual long-form projects like scripts and works of fiction. 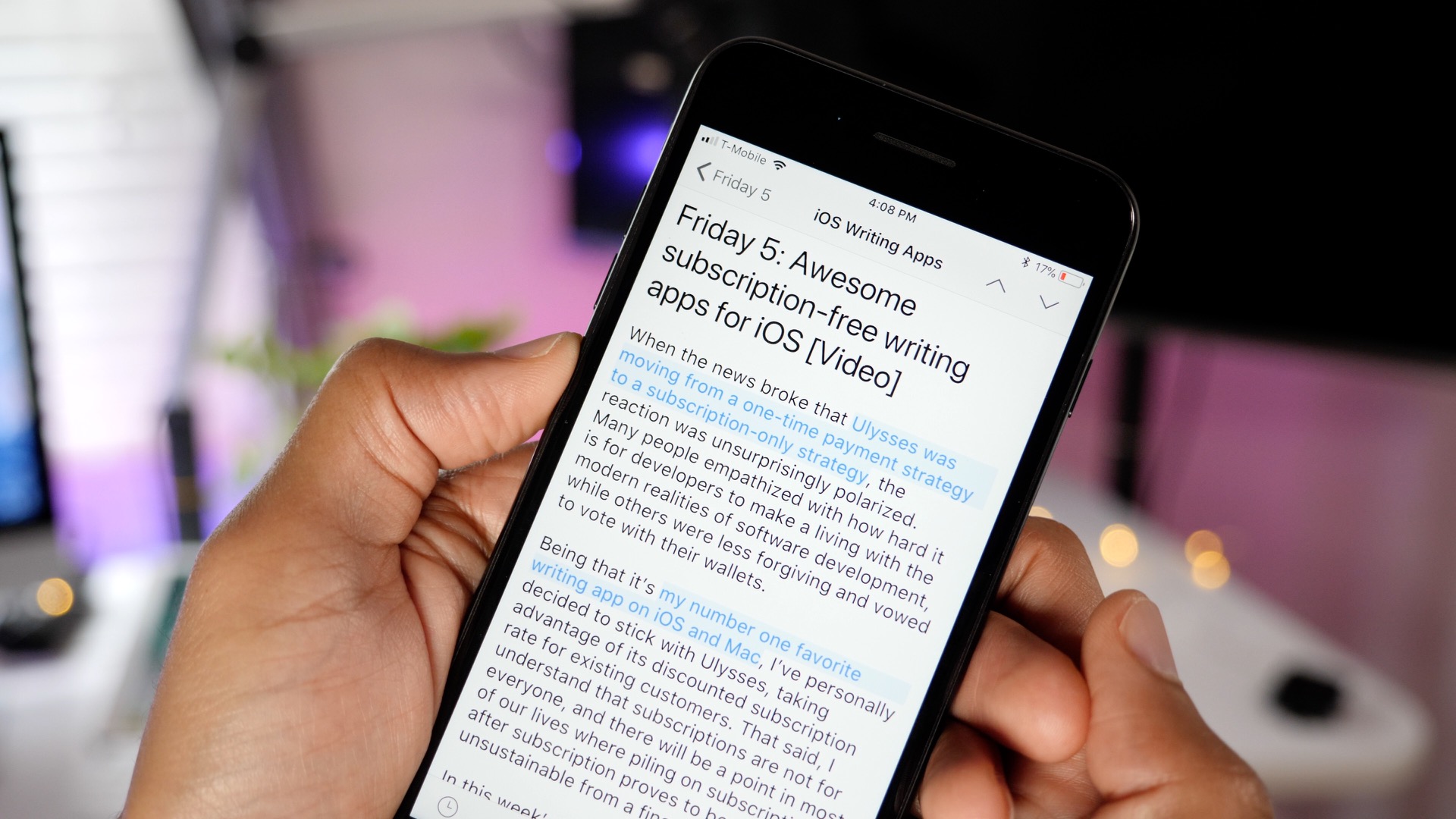 Scrivener heavily emphasizes the research aspect that goes into the creating process. Like Ulysses, Scrivener comes with an interface that allows you to arrange individual pages and compile them into a final composition.

Instead of plain-text Markdown previews, however, Scrivener uses rich text formatting similar to Microsoft Word and Pages. Although Scrivener is more app than most people will need for writing blog-style content for the web, it’s more than capable of doing so.

Featuring iCloud-sync, iA Writer is an app that’s virtually synonymous with iPad writing, and is available on the iPhone and Mac as well. iA Writer supports Markdown and Markdown previews, along with exporting to publishing services like Medium and WordPress. 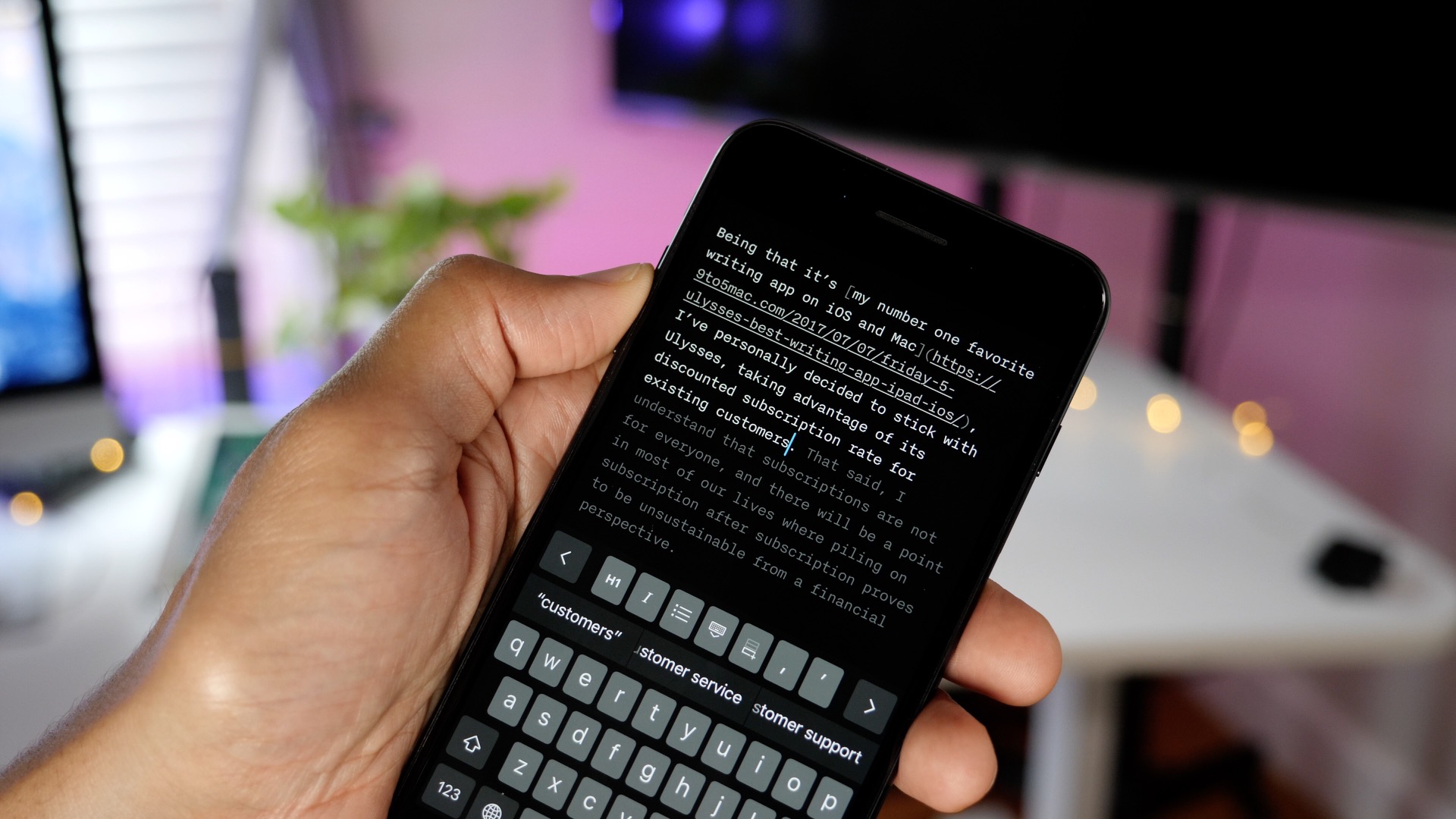 One of my favorite iA Writer features is the focus mode, which dims the rest of the in-progress document, and only highlights the current sentence or paragraph that you’re working on.

Although the app can be set up with a sparse interface, the app is deeper than it looks on the surface, and features many ways to customize the writing and organizational environment to your liking.

Before Ulysses, Byword was my iPad writing app of choice. The app isn’t as full-featured as some of the other entries on this list, but its simplicity is one of its primary selling points. 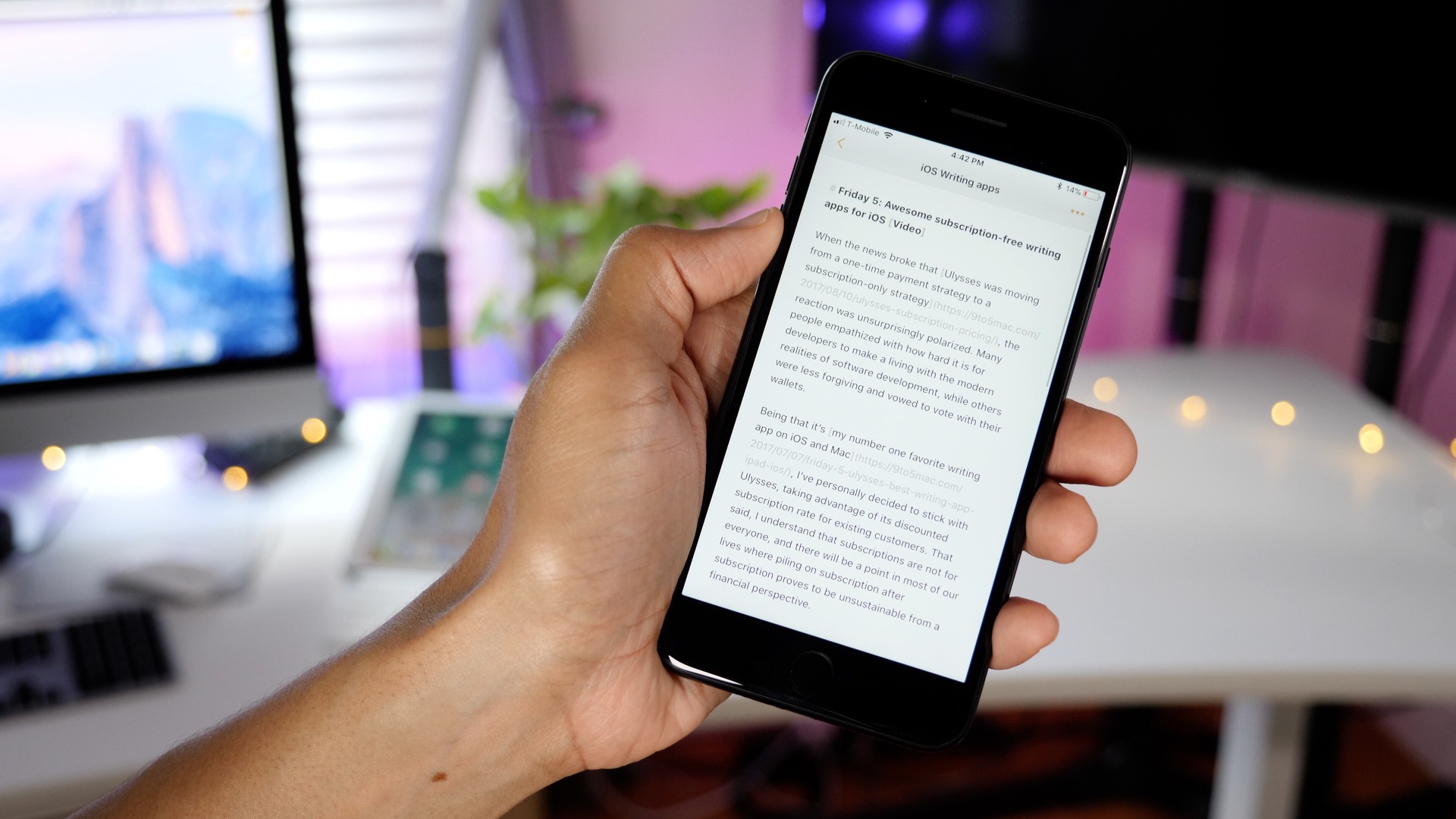 Byword supports Markdown and plain-text Markdown previews, and comes with iCloud and Dropbox syncing in tow. The app also supports a wider variety of publishing platforms, like Medium, WordPress, Tumblr and Blogger.

If you’re looking for one of the least expensive Markdown-enabled writing apps, then Byword is a solid choice. You can pick up both the iOS and Mac version for less than 10 bucks.

Page is Apple’s free word processing app that makes up one-third of its iWork suite. Being that it is a traditional word processor, Pages is more akin to Microsoft Word than any of the other apps on this list. That means that there’s no built-in Markdown support, no multi-document compile feature, and no publishing options for third-party platforms. 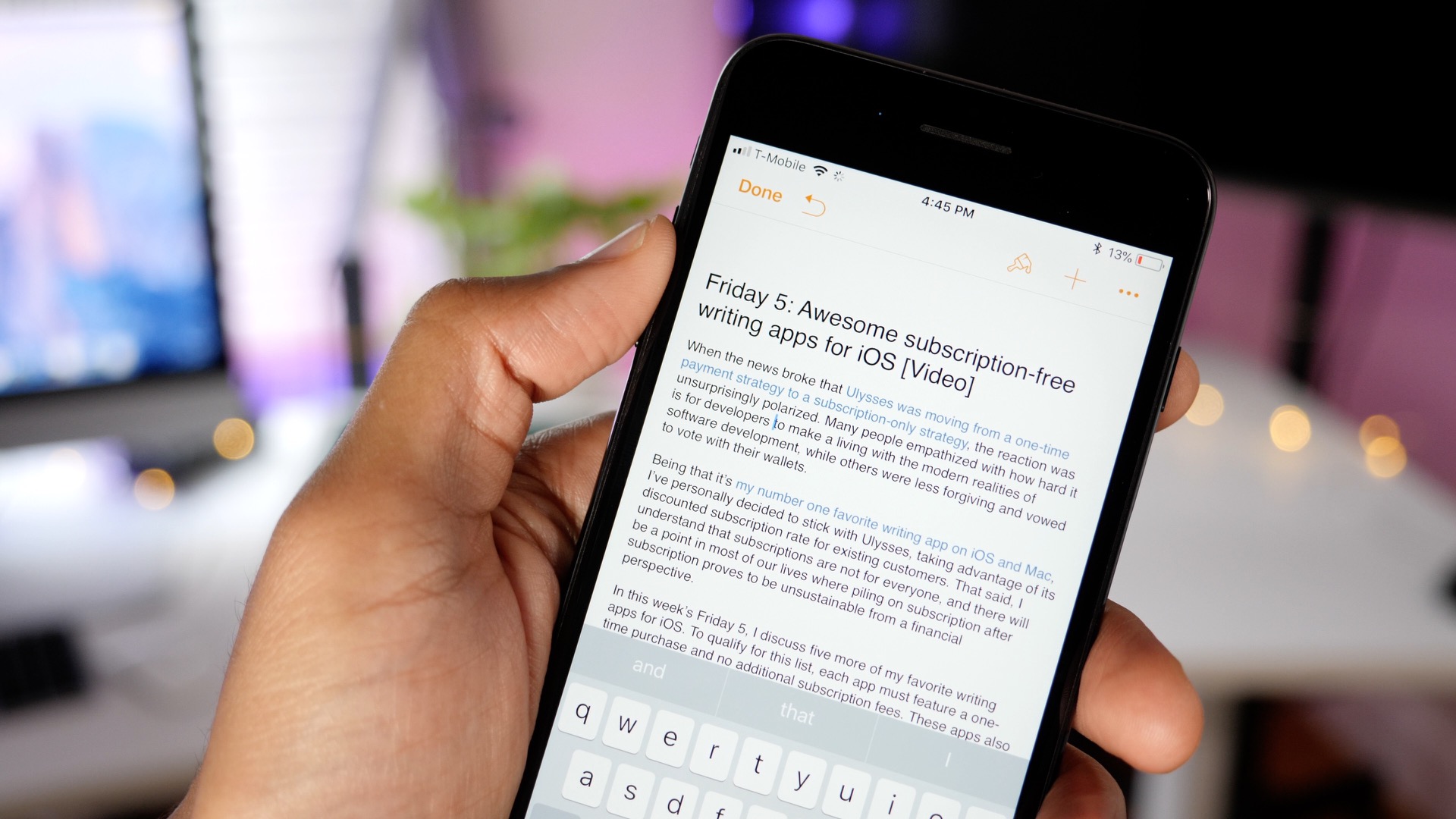 I often use Pages when writing documents that need to be shared with others, mostly thanks to its ability to export in the popular Microsoft Word .docx format.

There is no shortage of writing apps available on the iOS App Store, but these are a few of my favorites. If you’re looking for a writing app that doesn’t require a subscription, then it would be a good idea to consider one of the apps in this post. Most of the apps mentioned feature Mac app versions that allow you to sync between desktop and mobile, and all of the apps feature Family Sharing to share purchases with those in your household.

What is your favorite writing app for iOS? Sound off down below in the comments with your thoughts, opinions, and suggestions.