Comparative review: Do you need a GoPro, or will a Yi or Aukey clone do the job? 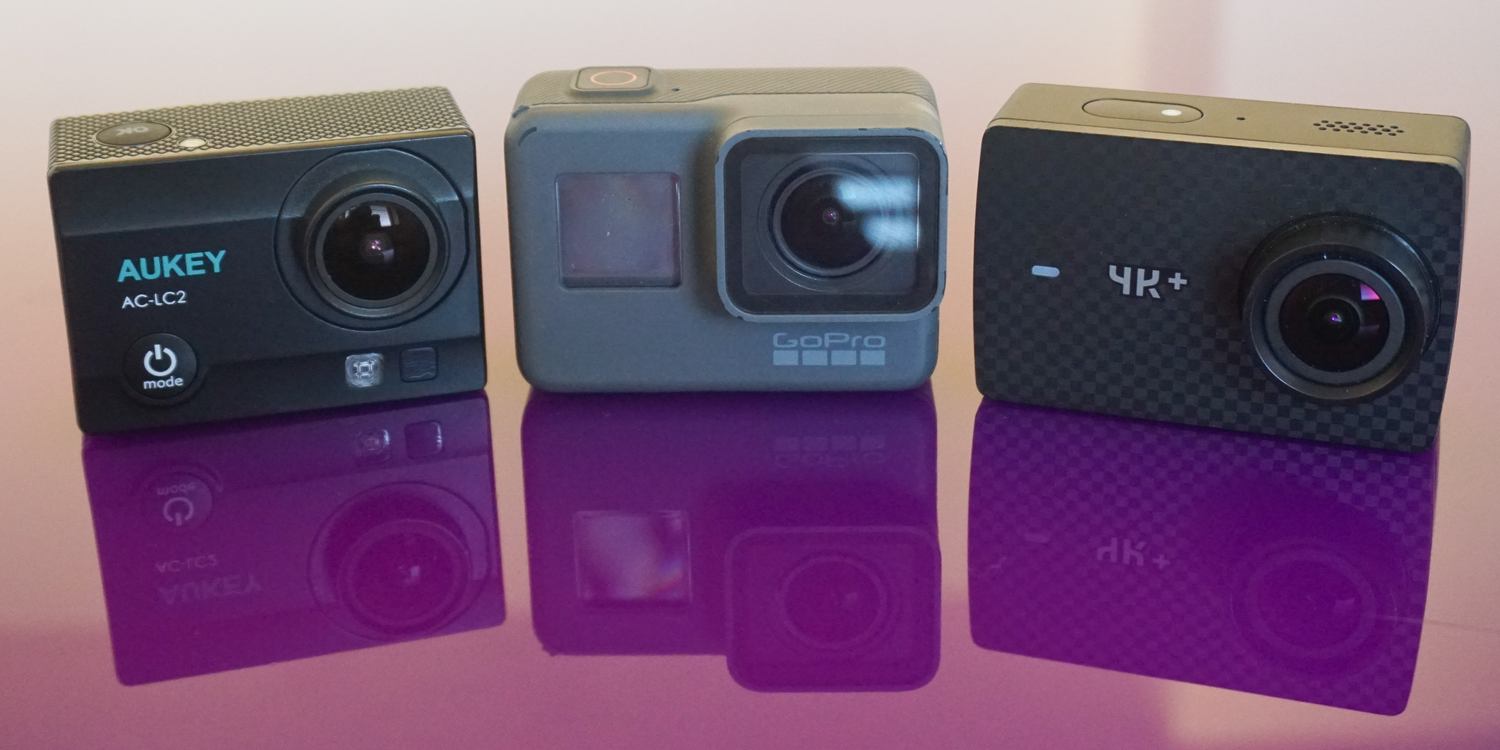 If you’re looking to shoot 4K video from a sedate position, your iPhone already has you covered. The latest iPhone 8 and upcoming iPhone X both offer 4K video recording at up to 60fps for buttery-smooth slo-mo. But if you’re looking to ride a mountain bike (or, indeed, a commuter bike on London’s potholed streets), abseil off a building or do anything else adventurous, you probably want a dedicated action cam.

You know a company has really hit the big time once people start using the brand name as a generic name for the product category. Biro and Hoover are the obvious examples from years gone by, but one of the best examples in today’s world is GoPro. Half the time people refer to ‘a GoPro,’ they really mean it as a generic term for a compact action cam …

Like any successful brand, however, GoPro has spawned a whole host of imitators, many of them offering cameras that not only look similar, but are compatible with the huge range of GoPro mounts available.

There are a whole array of cheap no-brand imitators, many of them costing less than $50. But what if you want 4K video and decent quality? Do you need the real thing, or would a camera from one of the better-known copycat brands be just as good? That’s the question I set out to answer.

The very latest GoPro is the Hero 6. This is a serious action cam at a serious price: $499. It shoots 4K video at an impressive 60fps. The older Hero 5, costing $399, shoots 4K at 30fps. Both prices are for the camera only – you pay extra for the bundles with extra mounts and so on.

Since most people will be looking at a clone for budget reasons, I picked two cameras that – on paper – more-or-less match the specs of these GoPros but at a lower price.

The YI 4K+ has comparable specs to the Hero 6 (4K/60fps), but offers a worthwhile $200 saving. However, unlike the GoPros, the YI isn’t waterproof. Most action cam usage is going to need protection from the rain at least, so you’re up to $340 with a waterproof case, for a $160 saving.

The Aukey AC-LC2 is close to the Hero 5 (4K/25fps instead of 30fps), at less than a third of the price of the real thing – and cheaper still on Amazon. Even more impressively, the Aukey includes a bunch of extras, including both helmet and handlebar mounts, and a wrist-mounted remote start/stop button. Like the YI, it isn’t waterproof, but includes a waterproof case as standard.

Both cameras are so close in dimensions to the GoPro Hero 5 that they can be considered the same size:

The Aukey, then, is a little smaller, but not enough to matter.

Neither of the clones look as nice as the GoPro, but honestly with something this small that’s not really relevant. You need to get very close to them before you see them as anything other than a generic action-cam. However, the Aukey is notably lighter than the others, and that does make it feel cheap in comparison.

The waterproofing of the GoPro means that both battery/card and USB port covers need to be tightly sealed, making them quite awkward to open. The battery covers of both YI and Aukey cameras are also difficult to open. The YI also has a very fiddly port cover. Aukey wins here, with no cover on the ports and the card also inserting at the side instead of behind the battery, making it much more accessible.

Although primarily aimed at action use, this type of camera can of course be used handheld as a normal camera. The main advantage over simply using your iPhone is the very wide field of view, which can be great for really giving an immersive feel.

You can see, then, that all three cameras get you more than twice the field of view of an iPhone, with the Aukey very close to the GoPro and the YI a little more constrained.

A trip to Hong Kong provided the perfect opportunity to test this aspect: an external elevator to the 63rd floor of a building. This is the sort of video where a wide field of view really pays dividends.

With the ground in shadow, upper buildings in sunlight and fairly bright skies, it would also be a good test of the dynamic range of each sensor.

For action shots, we might be somewhat forgiving of quality – it’s really the sense of experiencing the activity ourselves we’re after. But if we use a camera for this type of less adventurous shot, then we tend to be more demanding.

The GoPro is noticeably better than its clones. It has great dynamic range – capturing both shadow detail and clouds – as well as really good stabilization for handheld use.

The YI was honestly very hard to distinguish from the GoPro. The slightly reduced field of view was noticeable but not dramatically so, and the dynamic range seemed identical.

The Aukey had notably poorer dynamic range. You can see in the video sample that the shadows are murky and some of the highlights are blown out – see the clouds, for example. It was also extremely slow to adjust exposure.

Sadly, I didn’t have any skiing holidays or abseils off tall buildings scheduled, so I had to settle for testing the cameras cycling around London. However, given the state of the roads and the standard of driving, I reckon it just about qualifies as an adrenaline sport …

What it does test very well is how well a camera copes with vibration. All three cameras were used on the same Garmin bicycle mount with a tripod adapter for a true like-for-like comparison.

The mount was already one place where the price difference made itself evident. The GoPro mount is rock-solid and easy to use; the YI one has the dual-ring system needed to align it properly, but was fiddly; while the Aukey camera was loose in its mount and I needed to jam a piece of paper in to stop it moving – and it still didn’t help much. The Aukey mount also lacks a dual-ring system to adjust the angle, so if you can’t mount it at exactly 90-degrees to the direction of travel, you’re out of luck.

Again, the YI performed almost as well as the GoPro. The Aukey was a whole other story – though I suspect this is mostly due to the poor-quality mount.

One other area where the budget nature of the Aukey really made itself known was the controls. The YI, like the GoPro, has a touchscreen, the Aukey doesn’t. This makes it significantly fiddlier to use, especially in an action environment where you may not be able to hold the camera directly in front of you. On the bike, for example, I had to bend down to do things like switch between 4K and 1080p.

My rule of thumb is than an hour of real-life 4K recording is enough for most practical purposes. That lets you get a decent amount of footage of any event, and copes with a 30-minute cycle commute each way. All three cameras deliver this, though the YI only just, while the GoPro and Aukey deliver around 90 minutes.

The Aukey call is perhaps the easiest one: it badly failed the all-important action test, and there are just too many compromises to make this a good option even for handheld use. No touchscreen, limited dynamic range and poor-quality mounts means this is very much a budget option.

The YI is a harder one. It is a very good camera, delivering very similar performance to the GoPro. The main areas where it falls short are the lack of waterproofing – requiring the use of a bulky case – and the more limited field of view. However, that missing 15 degrees FOV really makes surprisingly little difference in real-life use.

If the YI were half the price of the GoPro, one could say those are acceptable trade-offs. But when it’s $340 with the case versus $499 for the Hero 6, it’s a more difficult call. When it’s $340 against $399 for the Hero 5, albeit with 60fps shooting allowing for slow-mo, it’s an even trickier decision.

Ultimately, I’d go for the GoPro Hero 6 if you just want a single camera and can afford it. But if that’s pushing the budget, or you want more than one camera, then the price difference comes more to the fore – especially if you want 4K slo-mo, which demands the 60fps performance of the Hero 6. There, the saving of $160 per camera is a factor that’s hard to ignore.

The YI 4K+ costs $299, or $340 with the waterproof case which will be essential for most action-cam uses. The Aukey AC-LC costs $125, including a waterproof case and several extras.