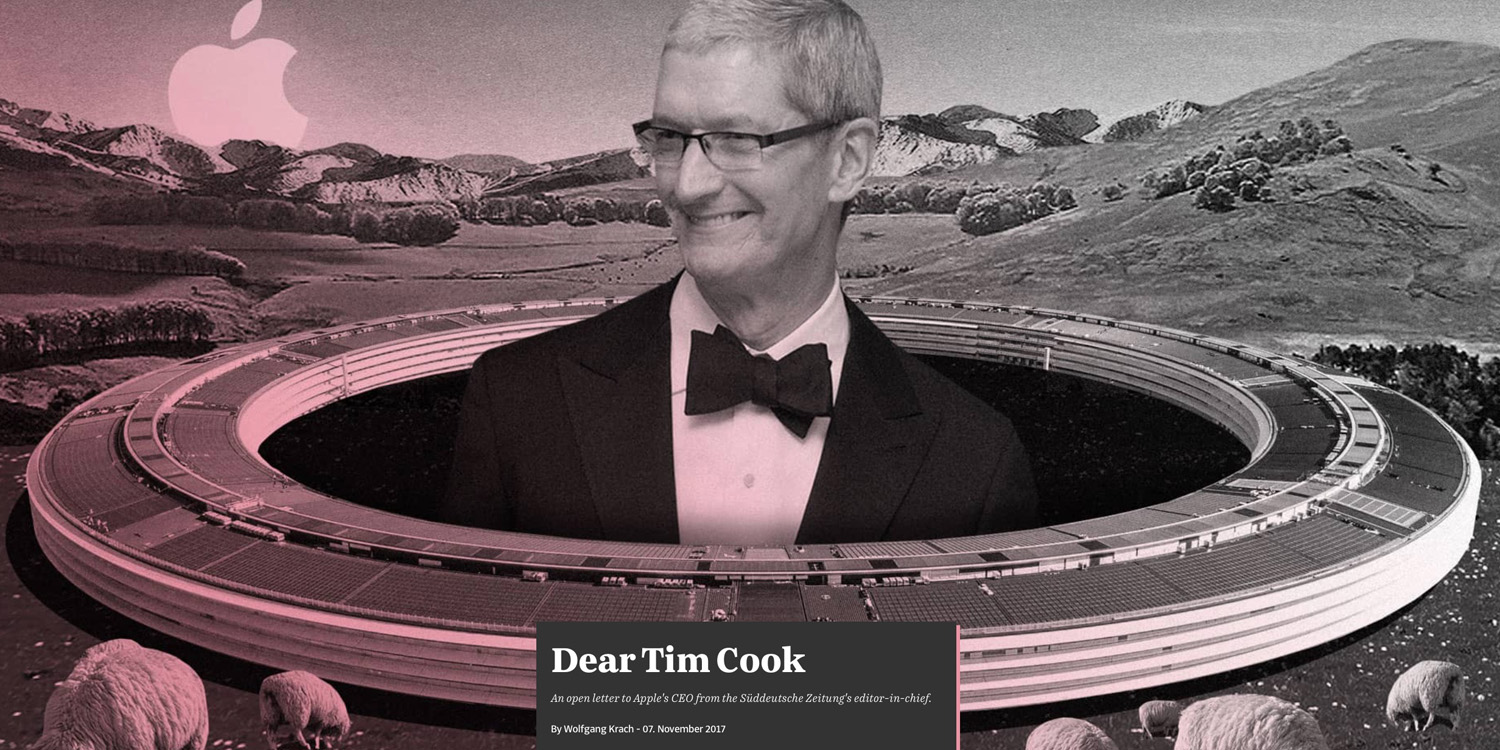 The editor in chief of Germany’s biggest newspaper, Süddeutsche Zeitung, has written an open letter to Apple CEO Tim Cook in which he claims that Apple pays ‘between 1 and 7 percent’ tax on its overseas income.

Wolfgang Krach says the numbers were reached by its analysis of the so-called paradise papers, a massive leak of financial records relating to offshore holdings in countries commonly used as tax havens. He attacks Apple for ‘shirking’ its tax obligations and for failing to answer questions put by the paper …

Questions posed by the Süddeutsche Zeitung and our aforementioned colleagues have gone either unanswered or been met with, at best, tight-lipped platitudes. Why? […]

Apple bills itself as a transparent company. If this is true, then there really isn’t any reason to stay silent, is there?

Krach praises Apple’s products, but says there is a disconnect between the company’s public stance and its private behavior.

Apple directly benefits from the infrastructure – educational or otherwise – that countries maintain. Mr. Cook, you recently told the New York Times that Apple had a “moral responsibility” not only to help grow the U.S. economy, but also “to contribute to the other countries that we do business in” […]

Mr. Cook, do you believe [Apple’s tax payment record] comports with the “moral responsibility” you have advocated? Such “tax optimization” – albeit legal – is only possible because specialized law firms such as Appleby devise complex company structures inaccessible to most other firms. Skilled workers, small business owners and employees in most countries outside the U.S., many of whom surely use Apple products, don’t have the means to shirk ordinary taxes.

The letter says that the paper is most concerned about Apple seeking ‘official assurance of tax exemption’ from an unspecified country.

Why do you want that? Why do you feel entitled to not pay any taxes in a country? Did you want to make zero-tax status a precondition for establishing tax residency there? What gives you the right to do so?

Apple has said that its ‘effective’ overseas tax rate is 21%. Neither Apple nor Süddeutsche Zeitung have explained the basis for their respective calculations.

But the latest development in the saga underlines the point I made yesterday. This controversy isn’t going to go away anytime soon, and Apple’s best response is to ensure that it not only lives up to its moral stance by refraining from unusual tax avoidance measures, but is sufficiently transparent in its financial dealings that there can be no appearance of underhand action.

There is, once again, a visible difference in attitude between U.S. and European reactions to the tax-avoidance claims. As I wrote in respect of the Irish tax ruling:

That same difference in attitude is reflected in the comments to yesterday’s piece.