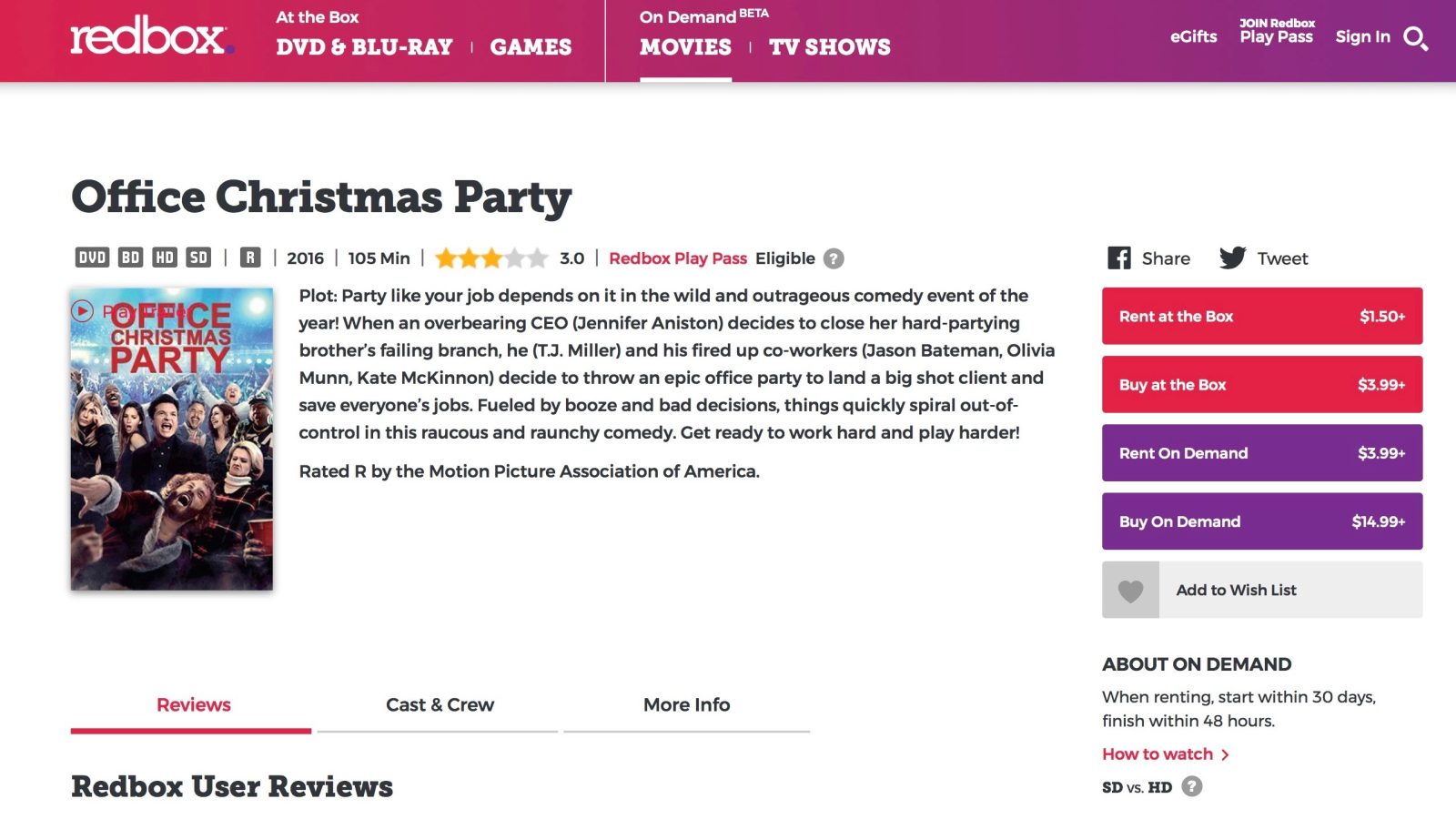 Update: Redbox now says the Apple TV app will be ready in the coming weeks. In a statement to BestAppleTV.com:

“Currently, consumers can use Airplay with Apple TV to watch rented or purchased content,” company spokeswoman Kate Brennan told BESTAppleTV.com. “An Apple TV app is launching in the coming weeks.”

Redbox today officially launched its streaming video on-demand service. Originally known for its rental kiosks, Redbox has suffered from stagnant growth as streaming video has become many people’s go-to for consuming content. The new Redbox On Demand service is accessible via iOS and Apple TV…

Speaking to Variety, Redbox CEO Galen Smith said that Redbox On Demand is a “natural extension” to what the company has been doing for years.

Rebox says it isn’t necessarily trying to compete with Apple’s iTunes here, but rather trying to give its current customers another medium for acquiring content:

“This is really about expanding the options for our consumers,” said CEO Galen Smith. “This allows us to go a lot broader and deeper than the selections we’re able to offer in the kiosk.”

Furthermore, Redbox is a firm believer that physical DVDs are not going anywhere and still has faith in its standalone kiosks:

Smith, however, sees the DVD kiosks living a long and fruitful life, catering to consumers who are price-sensitive and see convenience and value in $1.50-per-day rentals. “We think physical disks will be around for a very, very long time,” Smith said.

Will you be taking advantage of Redbox’s new On Demand service? Let us know down in the comments.

In addition to renting and purchasing at kiosks, Redbox customers now have the option to rent or purchase for streaming. Purchased content can be downloaded, perfect for offline, on-the-go watching. As consumers continue cutting the cord and abandoning costly cable subscriptions, On Demand offers an à-la-carte solution with the instant gratification that today’s consumers also crave.

“Redbox customers have asked, and today we’re delivering an On Demand option that offers them the best of both the physical and digital worlds,” said Galen Smith, CEO of Redbox. “Redbox provides our customers with choice – the value they want and expect from our kiosks, the instant gratification of On Demand rentals and purchases, and the availability of new-release content, all without monthly subscription fees.”

More than 35 million customers have downloaded the Redbox app and according to a recent Omnibus survey*, nearly half (48 percent) of all Americans find out what’s new in home entertainment from Redbox. The new On Demand service is available on the Redbox website, the Redbox app for Android and iOS-enabled devices, as well as Apple TV, Chromecast, LG and Samsung Smart TVs, and Roku®.

“We know consumers have a lot of choices when it comes to subscription streaming services, but no other brand is as closely associated with new-release movies as Redbox,” added Smith. “We’ve been America’s choice for new content for 15 years, and we’re excited to offer a new way to watch that provides greater choice within the Redbox ecosystem.”

Redbox On Demand offers many of the same new-release movies available at the Box, and also expands the library to include a growing collection of hit movies and TV shows for rental or purchase On Demand.

“The newest-release movies are not available in subscription streaming services,” said Ash Eldifrawi, Chief Marketing and Customer Experience Officer at Redbox. “Redbox’s stronghold on new releases has played a big factor in our ongoing relevance to consumers who crave the latest content.”

Pricing for new-release On Demand rentals start as low as $3.99 for 48-hour VOD rentals and $9.99 for EST transactions.

Averaging one million disc rentals a day, Redbox is the top transactional home entertainment provider in the U.S. for movie rentals – ahead of other digital rental providers, and all of the nation’s cable and satellite VOD distributors.** Redbox installed more than 1,700 net new rental kiosks in 2017, with more installations planned in 2018.

For more information about Redbox On Demand, visit Redbox.com.