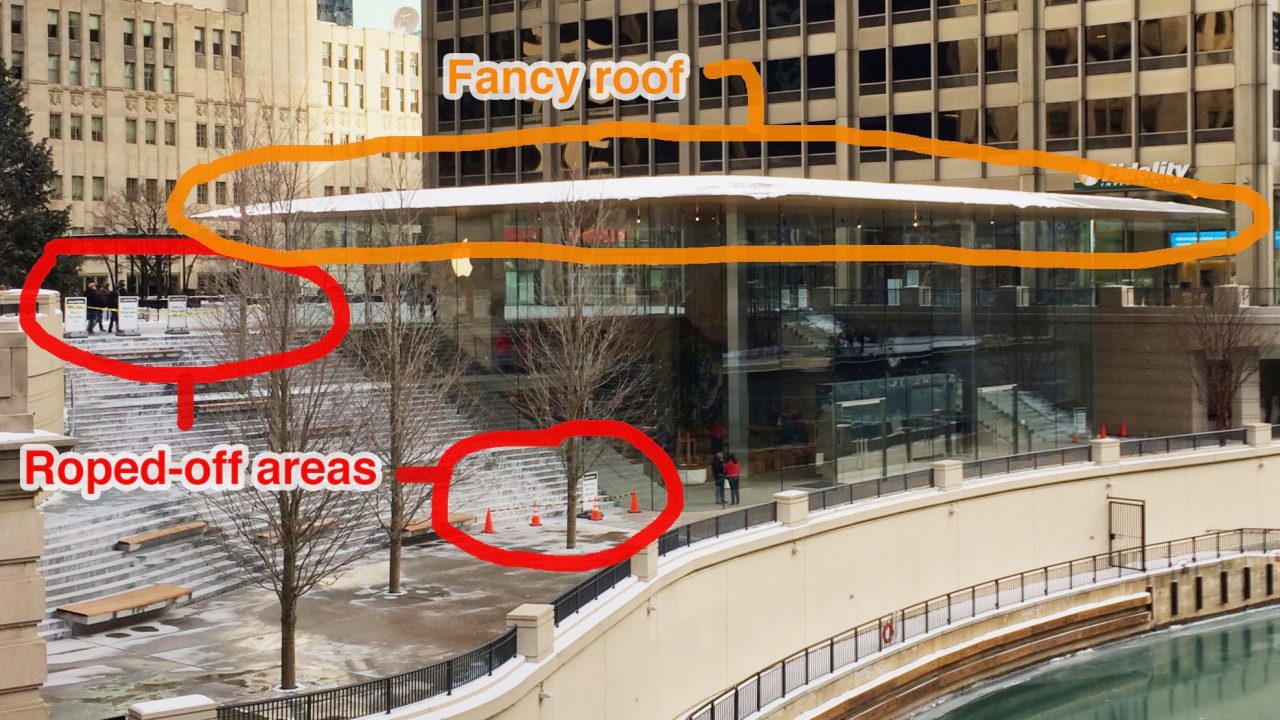 Apple opened its new flagship retail store in Chicago earlier this year to much acclaim, but as the weather turns from fall to winter, a design oversight is causing some problems. As reported by Chicago blog Spundart, Apple seemingly didn’t design the MacBook Air-like roof of the store to account for snow…in Chicago…

Apple’s newest Chicago store garnered earlier attention for its roof design that mimics a MacBook Air, but one clear oversight is that there are no gutters to catch snow or ice. Furthermore, as the multi-level store sits along the Chicago River, the roof is sloped downward, meaning that anyone standing on the walkway along the river gets hit with falling snow and ice.

Although the fancy roof has a problem. The edges of the roof slope down without any gutters to catch the melting snow. Pedestrians under the roof will get hit by sliding snow.

Y’know, basic things like in Chicago, the weather gets cold. It snows. The snow falls off the roof. Don’t design a slopping roof where the snow can’t be caught or guttered off somewhere.

To combat the falling snow, Apple has closed off the entire area around the store save for the top entry way. The store features two separate entrances, one at the top and one at the bottom walkway along the river, but access to the bottom entrance is blocked by caution tape and “Watch for falling snow and ice” signs.

For a store in Chicago, the lack of gutters for snow and ice is a rather remarkable oversight. Of course, it’s possible Apple realized the potential for falling snow, but decided to preserve the design of the building itself in favor of simply roping off affected areas during the winter months.

It’s unclear at this point if Apple plans to address this oversight in any way other than roping off the riverside walkway. Some heaters up top could at least dissipate the snow and ice.

The Chicago store is a remarkable piece of architecture in and of itself. A few of us at 9to5Mac had the opportunity to visit the store earlier this month and noted of how seamless the curved glass design is, opening up to the Chicago River. Unfortunately, those riverside views are seemingly unobtainable during the winter.

Have you had a chance to visit Apple’s Chicago River retail store? If so, let us know what you think of it down in the comments.