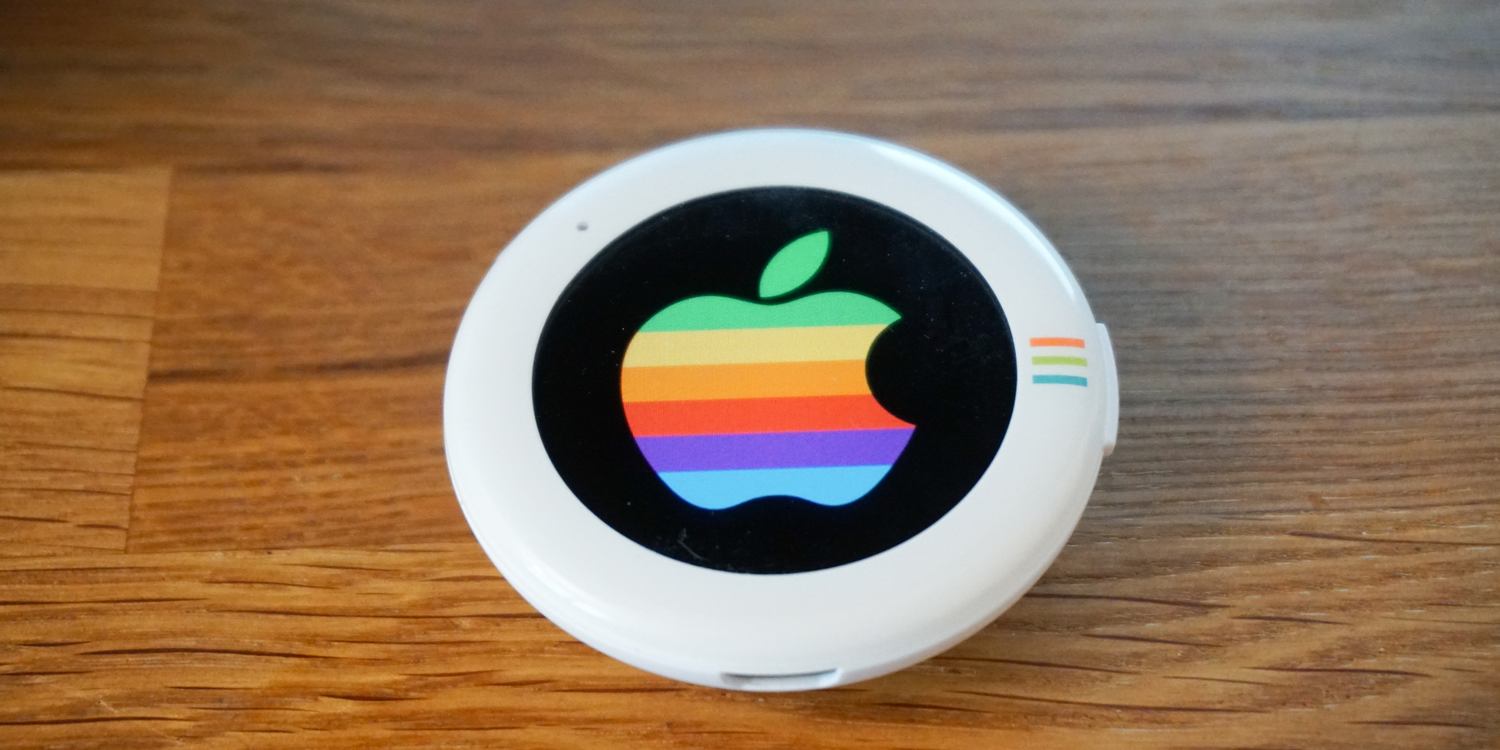 When Beam announced its app-controlled OLED smart button last month, it struck me as a fun – if relatively pricy – idea.

What you get is a modern-day take on a button which you can wear on clothing or attach to a bag. Instead of a fixed message on metal, you get a 400×400 pixel AMOLED screen on which you can display anything you like …

The button is available in black or white. It measures two inches in diameter, by 0.4-inches thick – a little thinner than the Apple Watch. There’s a relatively thick surround, so the display itself measures 1.4 inches in diameter.

The plastic surround is glossy on the front, matt on the rear. The rear of the badge has a metal plate with the Beam logo.

The plastic surround itself looks perhaps slightly cheap, but what stands out, of course, is the OLED screen. This is bright and vivid – though brightness is controlled by the app, of which more in a moment.

Along with Beam Authentic itself (just Beam from now on), you get a pin holder, two bag tags (with one strap) and two magnetic attachments. The pin holder is quite big, so I’d be worried about this damaging clothing, but fortunately the magnetic holders are very strong, so provide a better way to attach the badge to clothes.

Beam lets you display a photo or static graphic, a GIF or a slideshow of all the images stored in it. For slideshows, you can choose the interval from a range of options:

Beam can store up to 100 images at any one time. 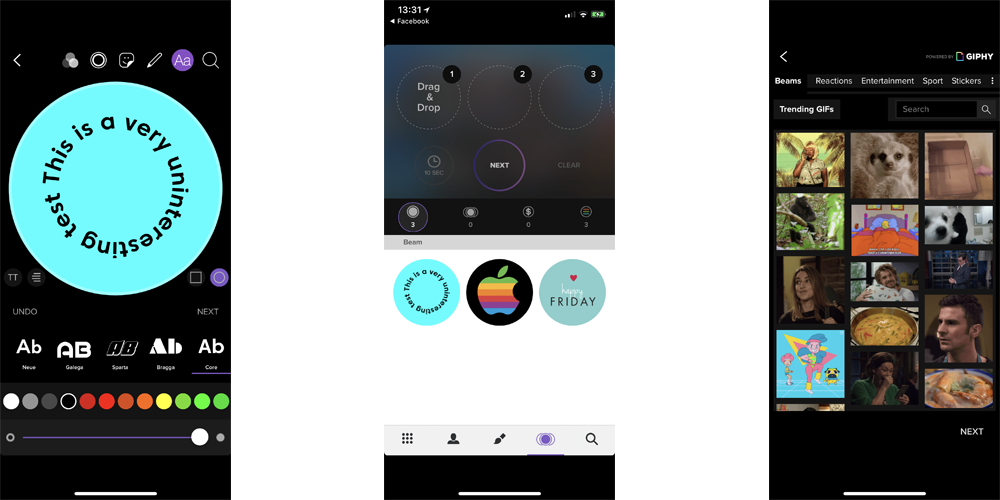 There are plenty of different ways to create your badges.

First, you can see what other people have created in a refreshable feed. This is accessed from the keypad-style icon in the left of the app’s menubar.

Second, you can tap the Create icon (a paintbrush) to choose between a variety of sources:

If you paint your own badge, you can choose the background color, border and graphic templates – and then use pencil, paintbrush and marker tools to draw. You can also type your message, choosing between 15 different typefaces.

There’s a really impressive level of customization in the app. For example, you can choose both the alignment and opacity of the text, and there are options to display the text in a square or a circle.

Within the GIFs, there are 15 different categories, including Memes and Trending. But mostly you’d find things by searching. I tried a wide variety of keywords, from Elf to iPhone X, and it always came up with matches – though it should be said that often only the first screenful was a good match, and further selections became increasingly random.

Static images take just a few seconds to transfer, while GIFs take significantly longer, each individual frame requiring about 2-3 seconds. You can’t do anything else in the app while a GIF is being transferred, so you’ll want to be sure of your choice before you beam it.

I have to say that I think the app is way less intuitive than it could be. There were quite a few times I found myself hunting for a particular feature – though in part that’s because there’s a lot of functionality included. Personally, I would have reduced the options somewhat to create a simpler app. But you do get used to it.

Display quality is extremely impressive. I’d say it’s maybe even better than the Apple Watch, though perhaps a lower resolution makes for a punchier look.

Beam claims battery-life of ‘up to 24 hours.’ Actual life varies a great deal depending on how much you use it. It has power-management features which include auto-brightness, auto-dimming and auto-sleep. It defaults to dimming after five minutes, but never switches off.

I found that in constant use (that is, not giving it any opportunity to auto-dim), the battery lasted 5-6 hours. With more realistic use, I’d say all-day usage or thereabouts is achievable.

The device includes panic-button functionality, which transmits a map link to your location and a default message to up to four different people.

The panic button feature is off by default, but to enable it you toggle it in the app and are then prompted to enter your name, your default message and then select up to four mobile numbers from your contacts.

To activate it, you hold the function button in for 10 seconds. The badge will flash red for three seconds to confirm activation, and will flash green when the message has been delivered.

The feature feels a little gimmicky to me – like someone at Beam realised that since the badge needs a Bluetooth connection to your phone, then this was something it could do. I’m not wildly sold on it as an actual panic button, but I could see it as a really easy way to send a standard message, like letting your partner know you’re leaving work.

Beam has a rather grand vision for the button: that by displaying our interests, or the causes we care about, it will prompt conversation between strangers. The ‘Authentic’ name comes from the idea that we’re revealing something of who we are to those around us.

It also asks customers to make a three-fold pledge, represented by the colored bands of the logo:

Reflecting this, it donates $3 per sale to one of three charities, which you select at checkout.

Beam is a product nobody needs: it’s a pure piece of fun. And at $99, it’s a relatively pricy piece of fun for something with rather specific functionality. But then that’s true of loads of gadgets at this kind of price level.

Beam’s vision aside, I think the reality for most people is that this is going to be used mostly to display fun images – the real-world equivalent of emoticons. So ultimately your perception of value will depend how much fun you think the idea is.

But I do think it’s a quality product. If you like the idea, and have $99 to spare, I don’t think you’ll be disappointed.

Beam Authentic costs $99 and is available from the company’s website.