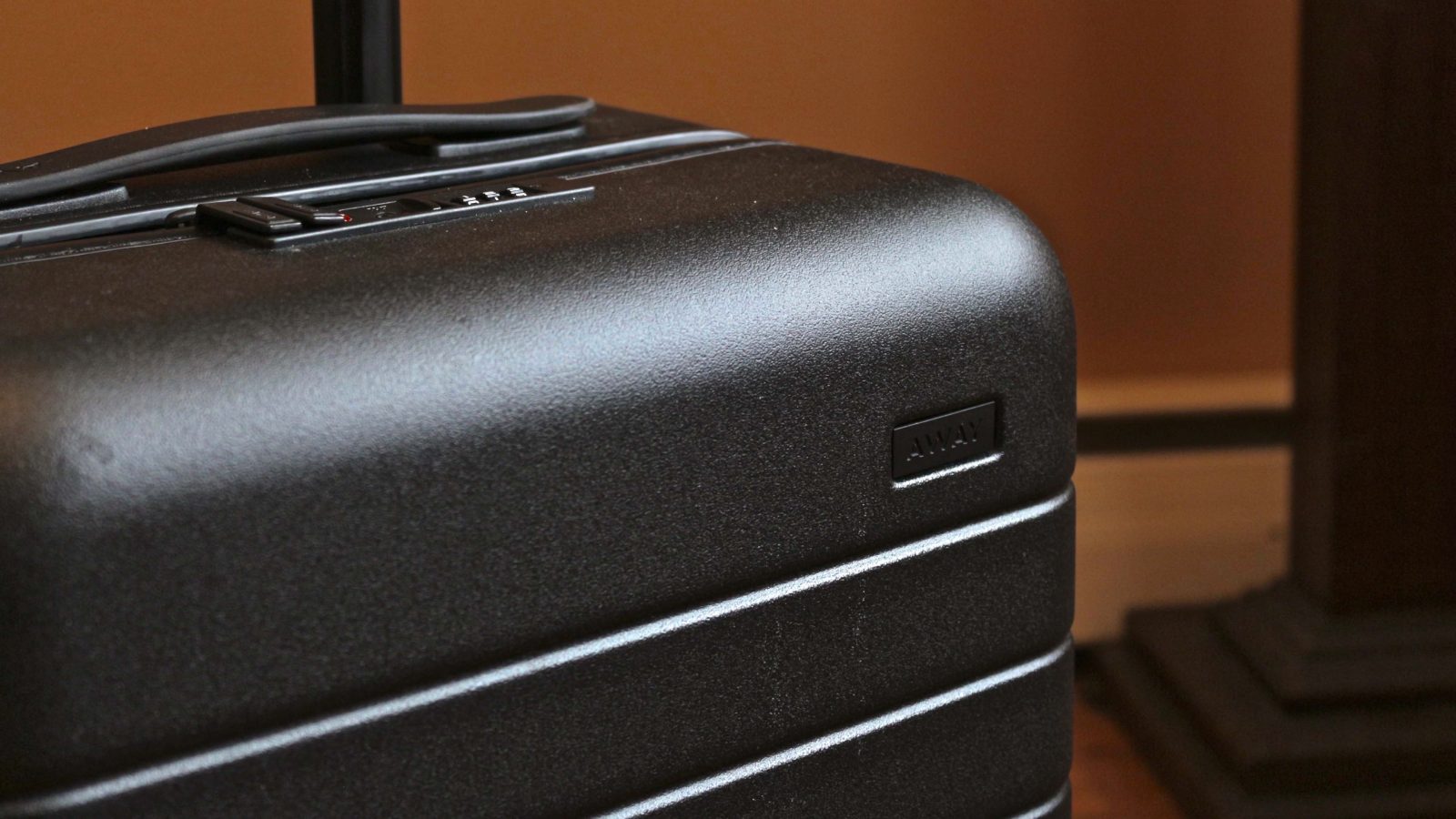 Traveling can disrupt even the best laid plans, and with today’s connected lifestyles, the stress of an unexpected situation is only exacerbated if you’re worrying about keeping your devices powered up. Combine that with the chaos and and spectacle that is the annual Consumer Electronics Show, and you’ve got the perfect storm for a travel headache.

Earlier this month, I spent 5 days in Las Vegas for CES 2018. With me came The Carry-On, modern and thoughtfully designed luggage with USB power sent over to try out by Away. Over the course of the show I put The Carry-On to the test, traversing miles of hotel, casino, and airport carpeting to bring you my thoughts. Let’s take a look at how well it held up and how it kept my devices charged…

Before we dive into the details, it’s important to establish a little context about Away. The company was formed by two former executives from Warby Parker – the eyewear manufacturer.

Away prides themselves on thoughtful design, a quality that fans of Apple products will surely appreciate. The company claims that their luggage typically costs less than other premium brands, even though they use materials of the same quality. What caught my attention is how Away luggage is truly made for modern lifestyles.

Clever interior compartments, a built-in USB charger, and carefully selected materials all recognize the most common pain points of travel and try to mitigate them. You can tell that the products were designed by people who actually travel, not in a sterile lab.

Away sells several sizes of luggage, but I chose to try out their smallest size for adults, The Carry-On. I’m a fairly light traveler, trying to avoid checking bags if possible. My previous rolling luggage was old and tired, so I was immediately taken by the build quality of The Carry-On when I pulled it out of the box. Away sent me the black model, but I would recommend a lighter (but not too light) shade if you’re purchasing for yourself. Dirt and winter salt residue quickly built up on the exterior of the luggage as soon as I got outside of my house. 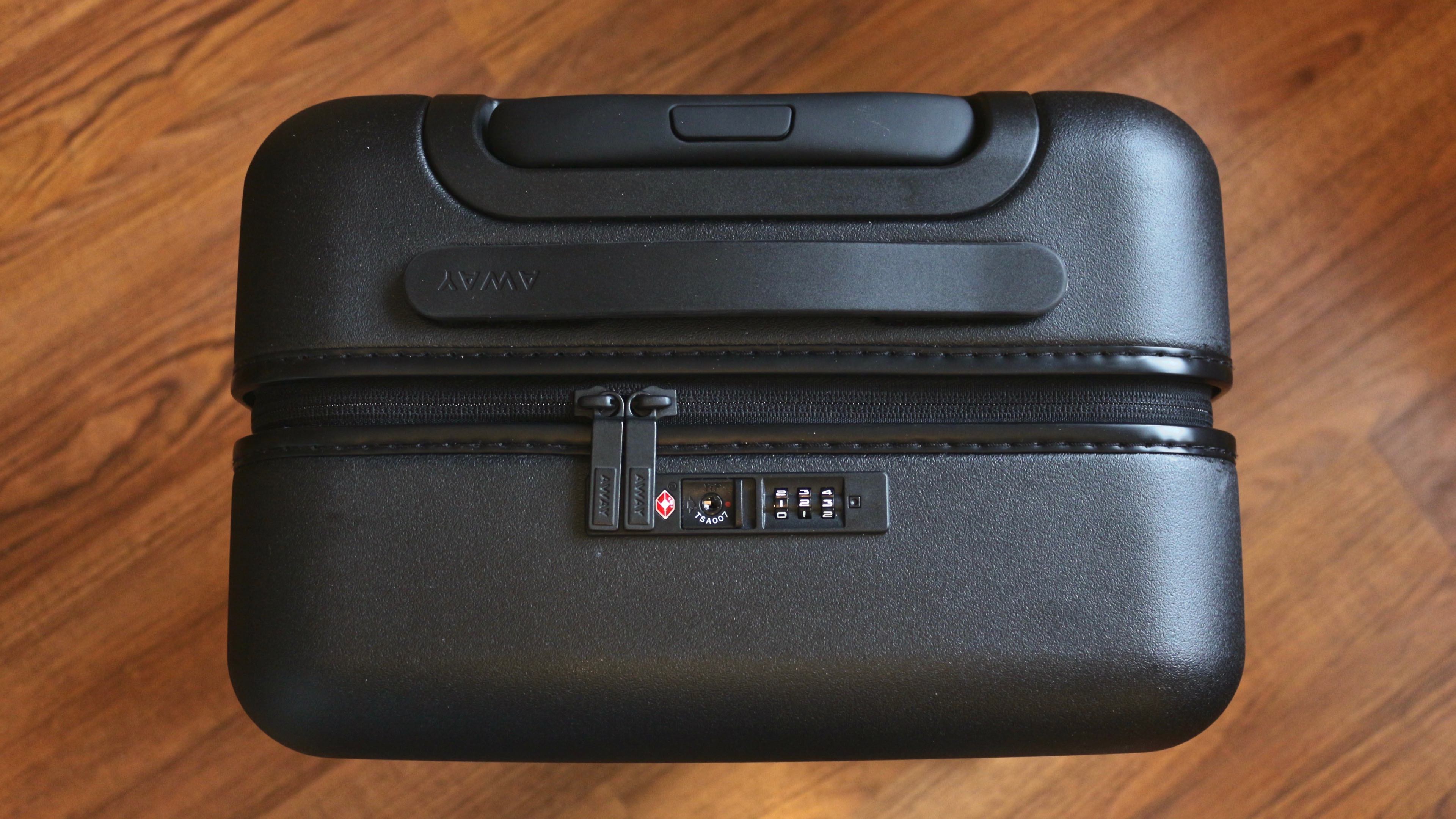 The exterior of The Carry-On, like all of Away’s products, is made of what they describe as unbreakable polycarbonate. I took the company’s word, and tossed my luggage into airport bins, thumped it down steps, and pressed the case’s capacity to the limit without fear of cracking. It held up. Around the exterior you’ll also find three handles – one on the side, one on top, and a telescoping handle for rolling the luggage. The exterior also holds two of my favorite features – a combination lock and USB charger. More on these later.

I was afraid that I wouldn’t be able to fit 5 days of clothing plus the 10,000 free USB flash drives from CES into carry-on sized luggage, but I was thankfully proved wrong. Packing to leave was made easy thanks to the interior design of the case. The top shell contains a sequestered zippered section that I used to store dirty clothes, and a top mesh zipper panel to hold everything in place and compress it to fit. Away also includes a dirty clothes drawstring bag, but I found that I didn’t need to use it.

The bottom shell of the luggage accommodates space to enclose the tires and telescoping handle, so some internal room is sacrificed. This wasn’t a problem, but makes for an oddly shaped and bumpy interior. Two buckling straps allow you to compress your clothes underneath a hard mesh organizer that folds over the top. Without this feature, there’s no way I would’ve gotten the case closed given how tightly I packed it.

Arriving at General Mitchell Airport in Milwaukee, my favorite feature of The Carry-On came in handy right away – the tires. Unlike my old luggage, Away’s four tires freely pivot in any direction, meaning that you can roll the case forward, backward, left, right, behind or alongside you without shuffling it around. This was especially welcome during the frantic run-walk from my vehicle to the airport terminal necessitated by the subzero temperatures that Milwaukee was experiencing when I arrived. 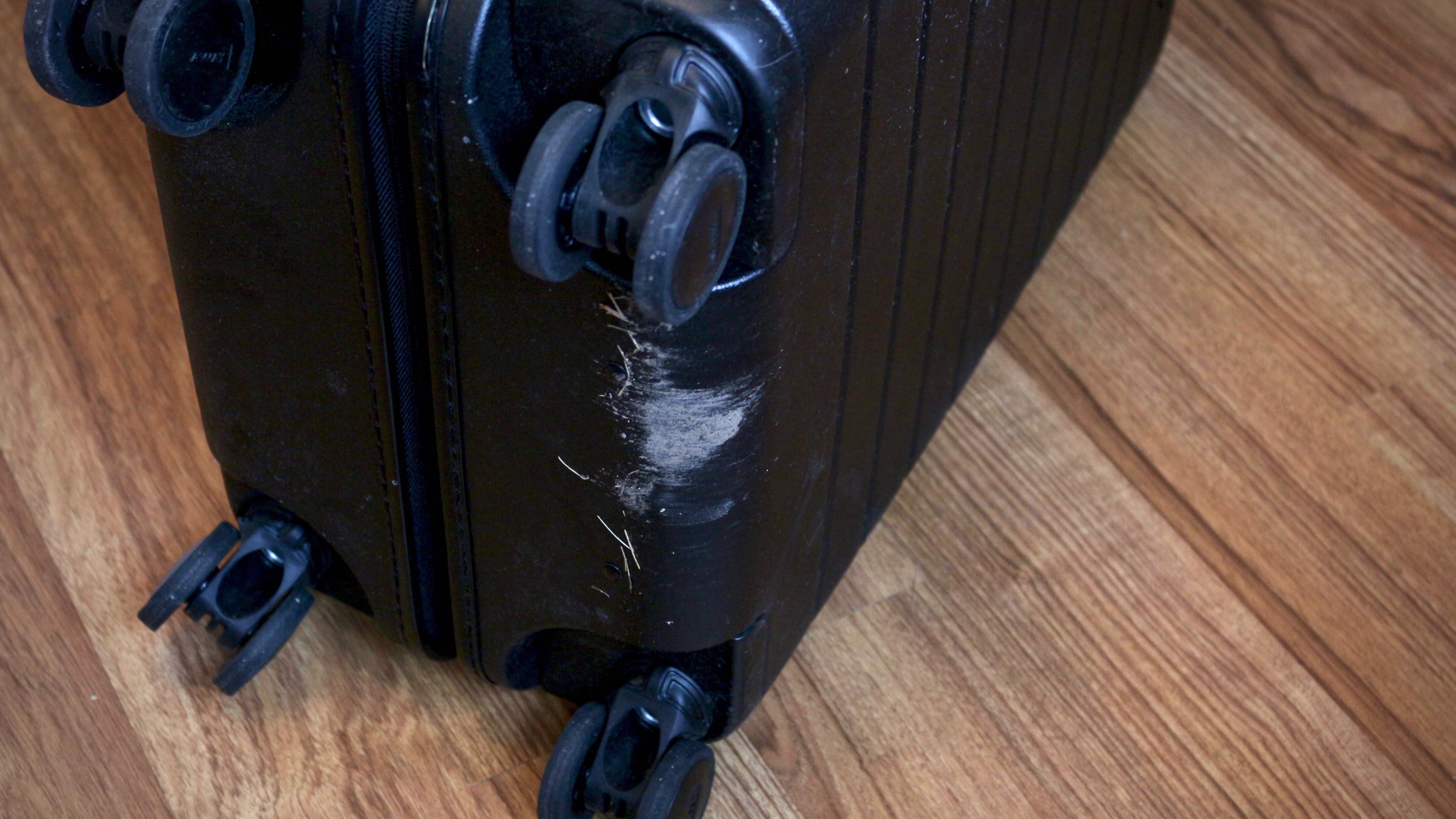 Not quite everything stays in Vegas.

Inside, The Carry-On fit comfortably in Southwest’s luggage sizer. I breathed a tiny sigh of relief. Navigating through the TSA line, I was a little worried about the case’s built-in USB charger. Batteries in luggage have been in the news recently, thanks to tightened security regulations. I wondered if I’d get through the line without issue, or if I’d need to remove the battery in order to bring the luggage on board. Away promises that the battery is TSA-approved, and indeed I faced no issue. 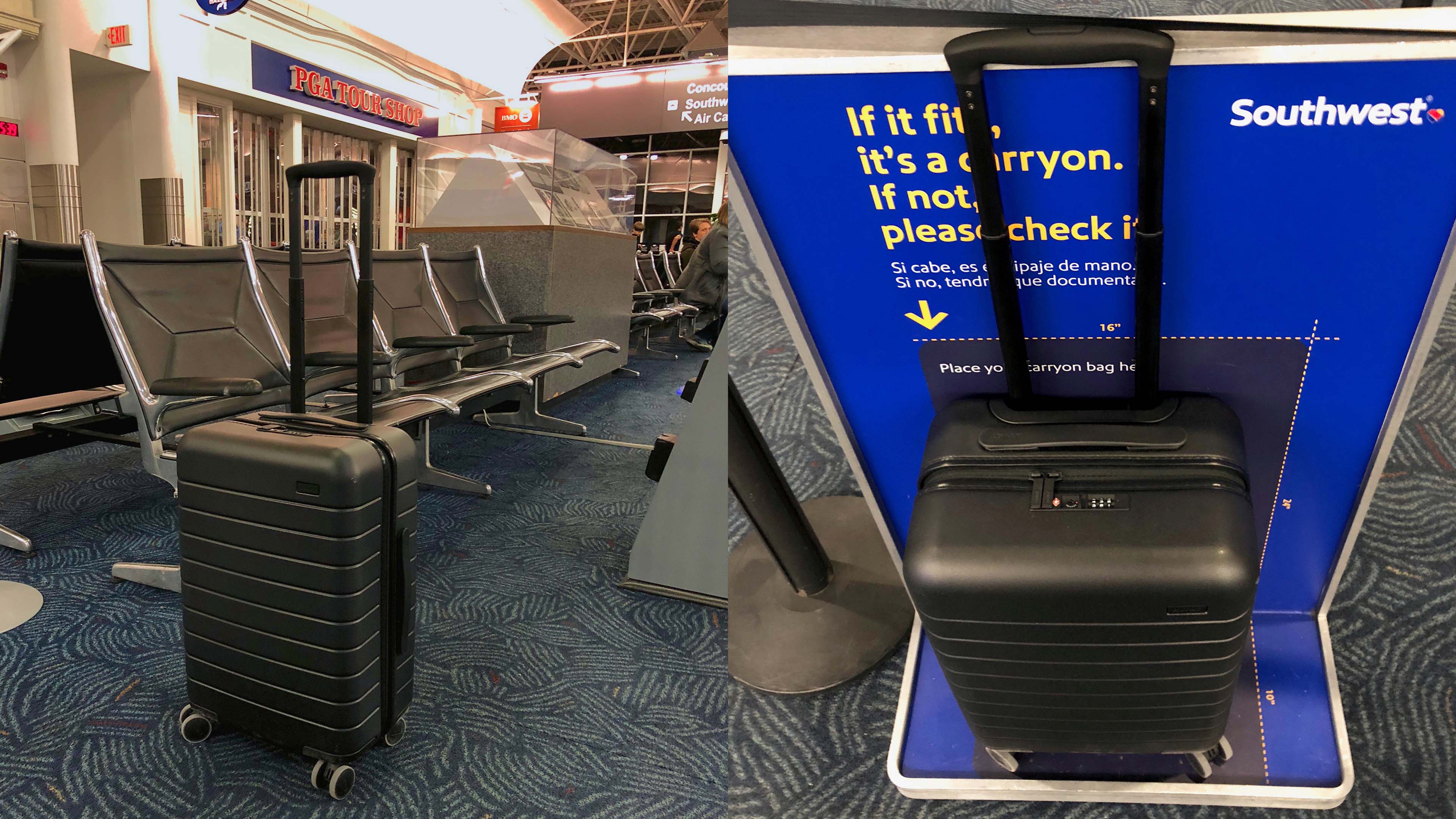 Boarding my flight, The Carry-On stowed easily in the overhead bin, but was noticeably heavier than my old luggage when I hoisted it up above my head. This wasn’t a problem for such a small case, but might be an issue with larger luggage.

I arrived in Las Vegas on a Saturday for press events, a few days before the official start of CES the following Tuesday. While most of the show’s attendees hadn’t yet arrived, Vegas is busy even on a normal day. Needing to store my luggage at hotel bell desks all over the strip made me appreciate The Carry-On’s built-in, TSA-approved combination lock. I could leave for the day’s events with peace of mind that nobody was rummaging through my extensive collection of Oxford shirts. 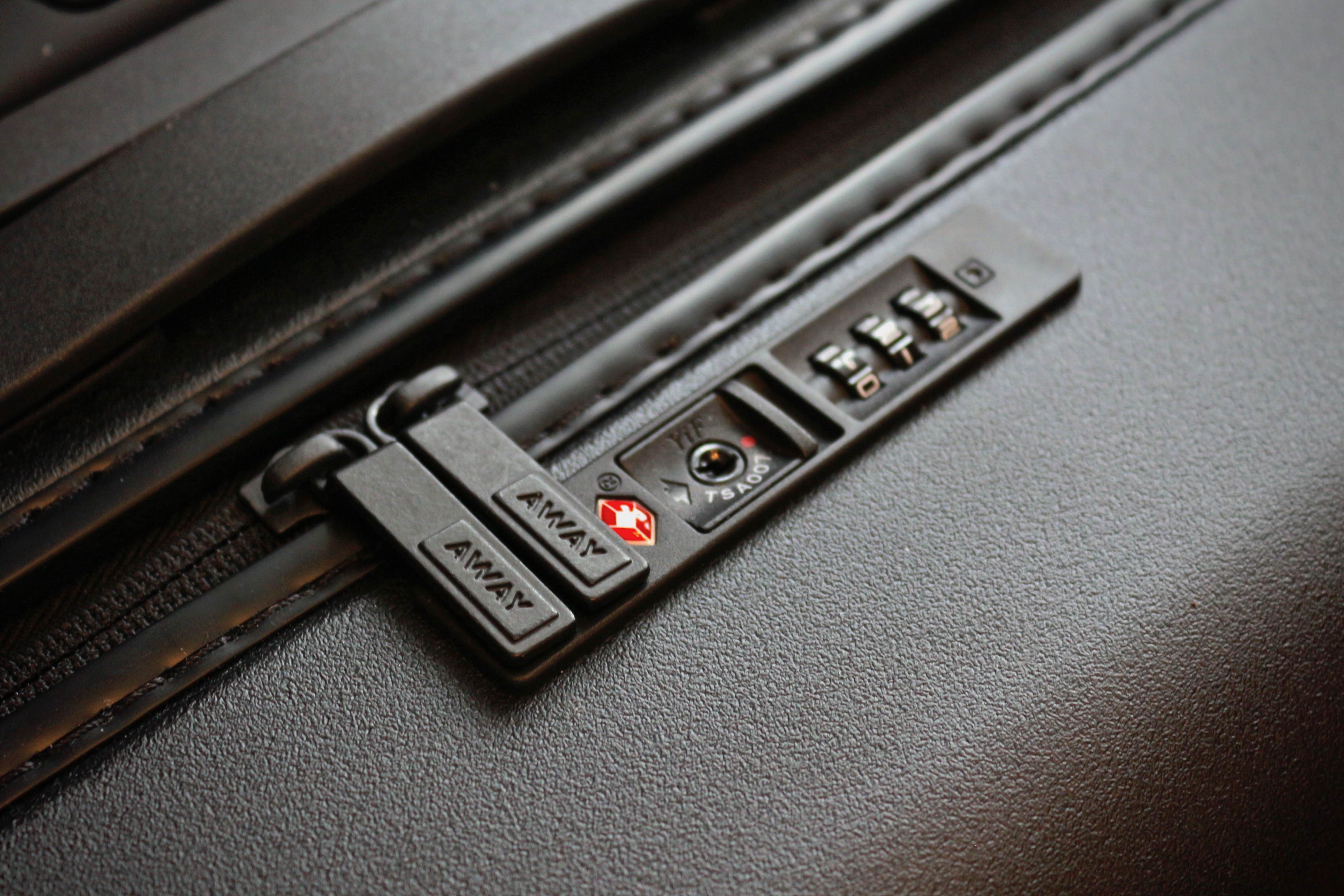 As soon as I was settled in, I popped out the built-in 10,000 mAh battery and stowed it in my laptop bag. This battery literally powered my CES coverage from the show floor all week, where a phone charge will cost you $1.99, and even low power mode isn’t enough to get an iPhone through the day. I was running low by early afternoon every day, and without a backup battery I wouldn’t have been able to bring you 9to5Mac’s video coverage of CES. Since the battery is so capacious, I only needed to top it off at my room twice all week.

CES operated under heightened security this year, and rolling suitcases are no longer allowed on the show floor. Due to these restrictions, I kept my luggage in my hotel room as much as possible during the actual show. The aforementioned storage compartments meant that I could live right out of the case without having to unpack and shuffle through my items.

As my time at CES came to a close, I tossed my Carry-On into the back of a Lyft and braced myself for the gridlocked crawl back to the airport. I had successfully navigated CES. While I picked up a cold on the show floor, my luggage returned home unscathed (aside from a little Las Vegas dirt). 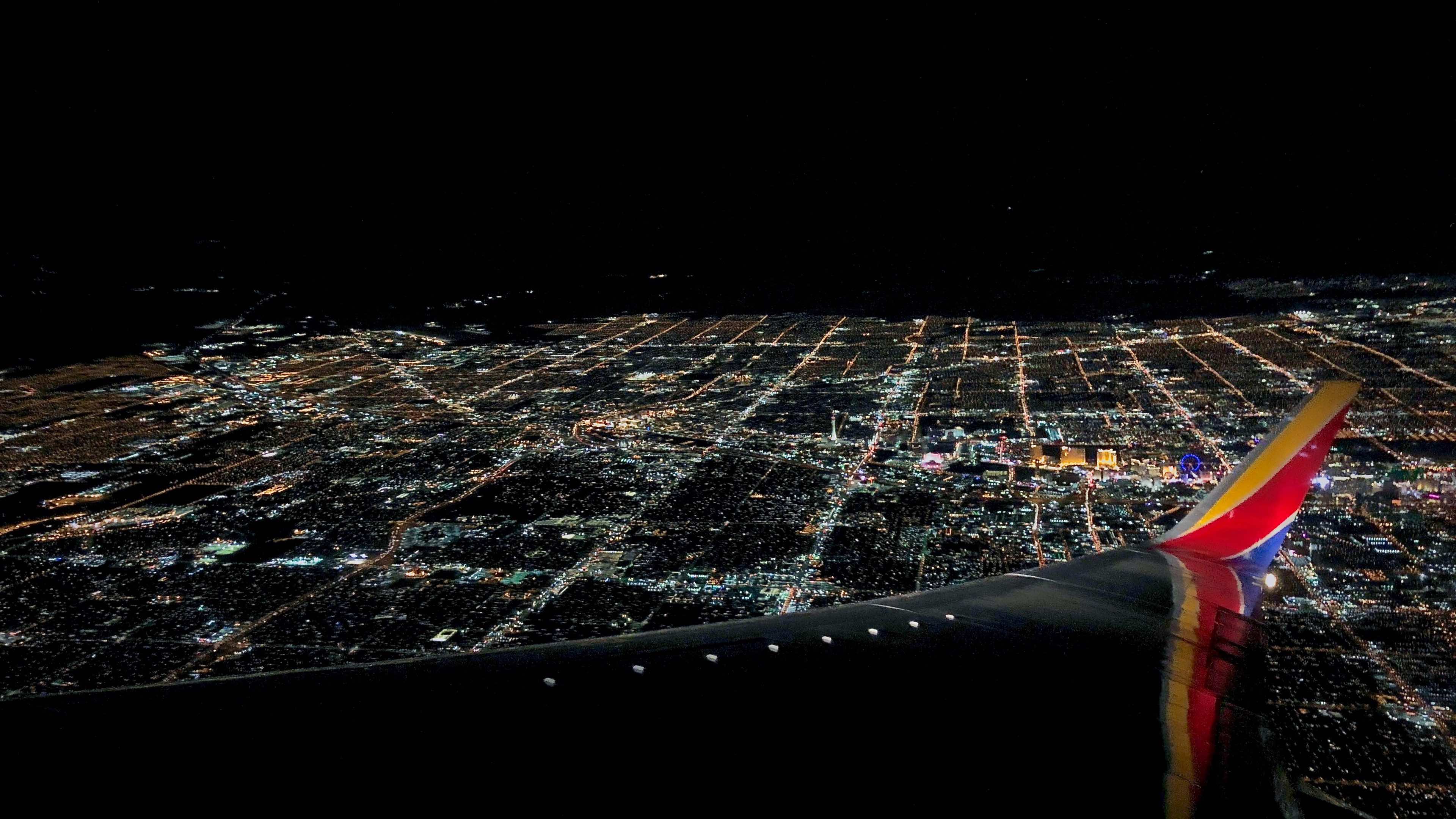 Could I have made it through my travels with my old luggage? Sure, but Away’s goal is more ambitious than that. Your attention is pulled a thousand different ways when traveling, and your luggage is the last thing you want to spend mental energy worrying about. The Carry-On helped me have a less stressful, more productive week. If you travel frequently, it’s a purchase that’ll be well worth your investment. The Carry-On (and larger sizes) are available on Away’s website starting at $225.