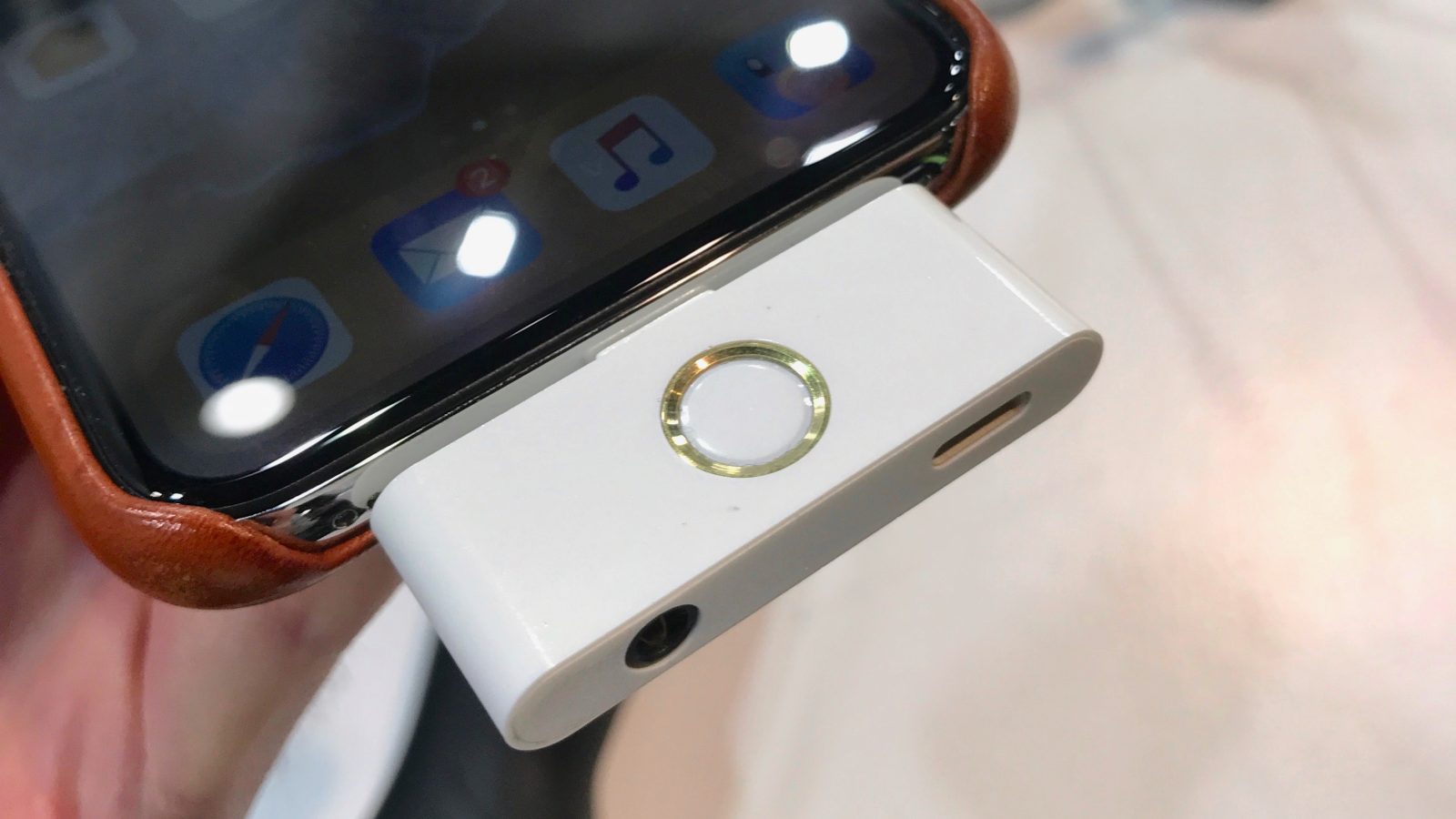 Every year at the annual Consumer Electronics Show in Las Vegas, the world’s largest technology brands take over the city to show off some of the biggest and most impressive innovations that will shape the coming year. Walking the show floor feels like touring a monument to optimism – a vision of the future where everything is faster, easier, and more intelligent. Like the bright lights and musical sounds of Las Vegas itself, colossal, brightly decorated booths lure in passing visitors like a carnival.

Every circus has sideshows, though, and CES is no exception. Wander away from the noise and excitement of the main hallways, and you’ll find yourself in a gadget funhouse, where reality begins to distort and surprises lurk around every corner. Here awaits the world of unusual Apple accessories and product clones.

Step outside the big top and join me in a look at some of my favorite strange and copycat Apple gear at CES 2018.

At CES, however, the future is now. That is – if you’re willing to settle for a… HouseCapsule? More than one company was exhibiting their very own HomePod clones on the show floor, complete with a mesh exterior and black and white color options. One manufacturer even leapfrogged Apple and already introduced a HomePod mini.

From a distance, you could almost be fooled into believing these speakers were the real thing. It’s only when you take a close look that you’ll see in lieu of an ambient Siri visualizer on top, standard physical buttons lie. I didn’t get a chance to listen to any music on these speakers, but I can’t imagine Apple feels too threatened by the clones. 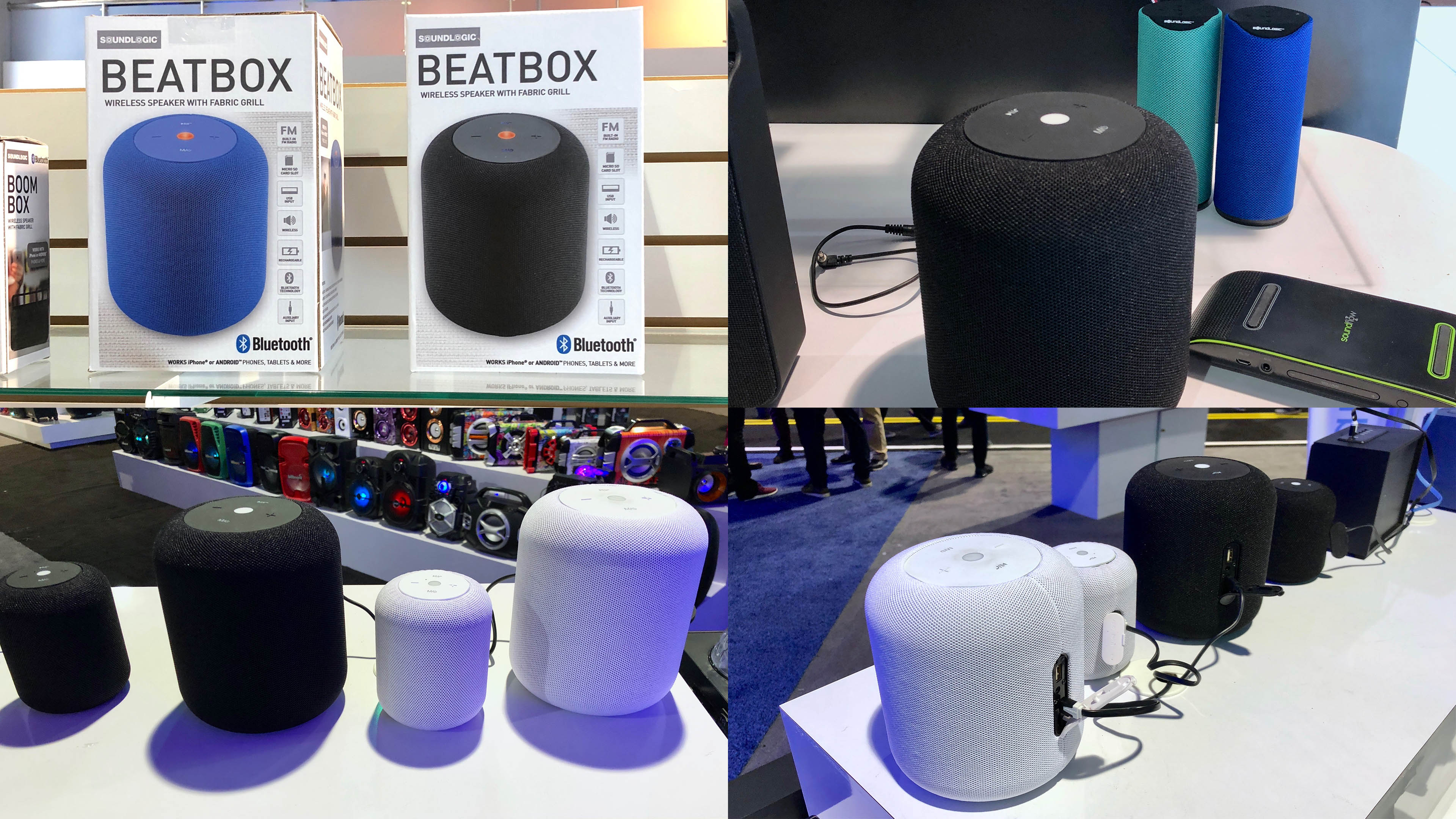 Apple’s AirPods have been a highly sought after accessory since their introduction, garnering long shipping delays and limited availability even into this past holiday season. It’s no wonder, then, that others have stepped in where Apple has fallen short.

Those who can’t get their hands on a pair of AirPods might settle for BH1 Bluetooth Sports Headphones instead. Complete with a cloned carrying/charging case and a design that looks like a cross between Apple’s previous EarPods and the original iPod earbuds, the untrained eye might believe you’re one of the lucky few able to access Siri with a double-tap. 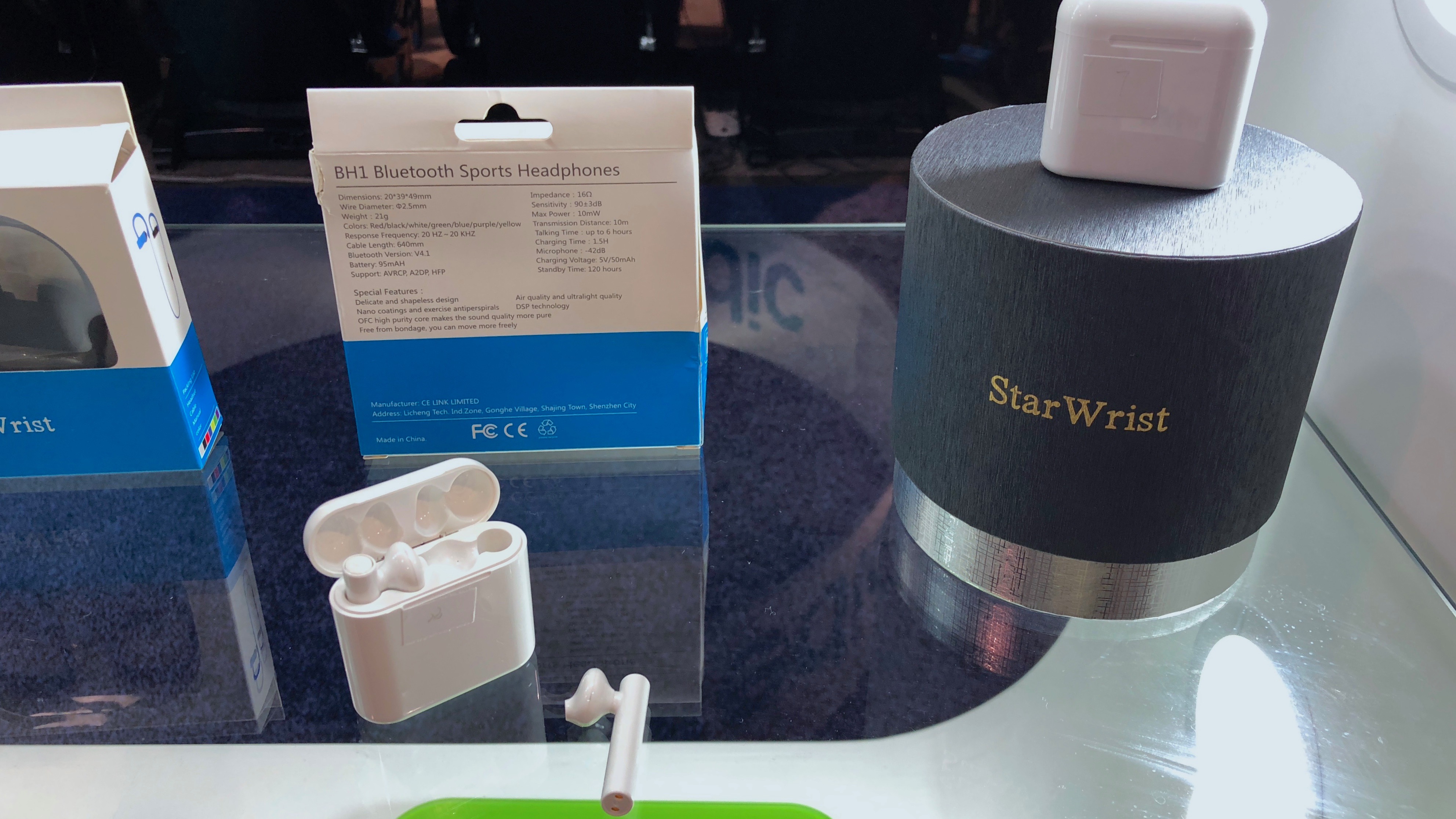 Announced alongside the iPhone 8, 8 Plus, and X, the AirPower mat is Apple’s official solution for charging your new iPhone, Apple Watch, and with a new carrying case, AirPods. Just like the HomePod, though, you can’t yet get your hands on one. Again, third parties have stepped in with their own interpretations of AirPower.

Since only Apple can provide a truly seamless experience for charging all of your devices wirelessly on one mat, these unofficial solutions typically offer multiple charging stations in a row, letting you charge several Qi-enabled devices at once.

The form factor has proven so popular that popular brands like Belkin have even debuted their own AirPower-style mats, and over on Kickstarter, charging mats are popping up that integrate both a Qi charger and Apple Watch dock. 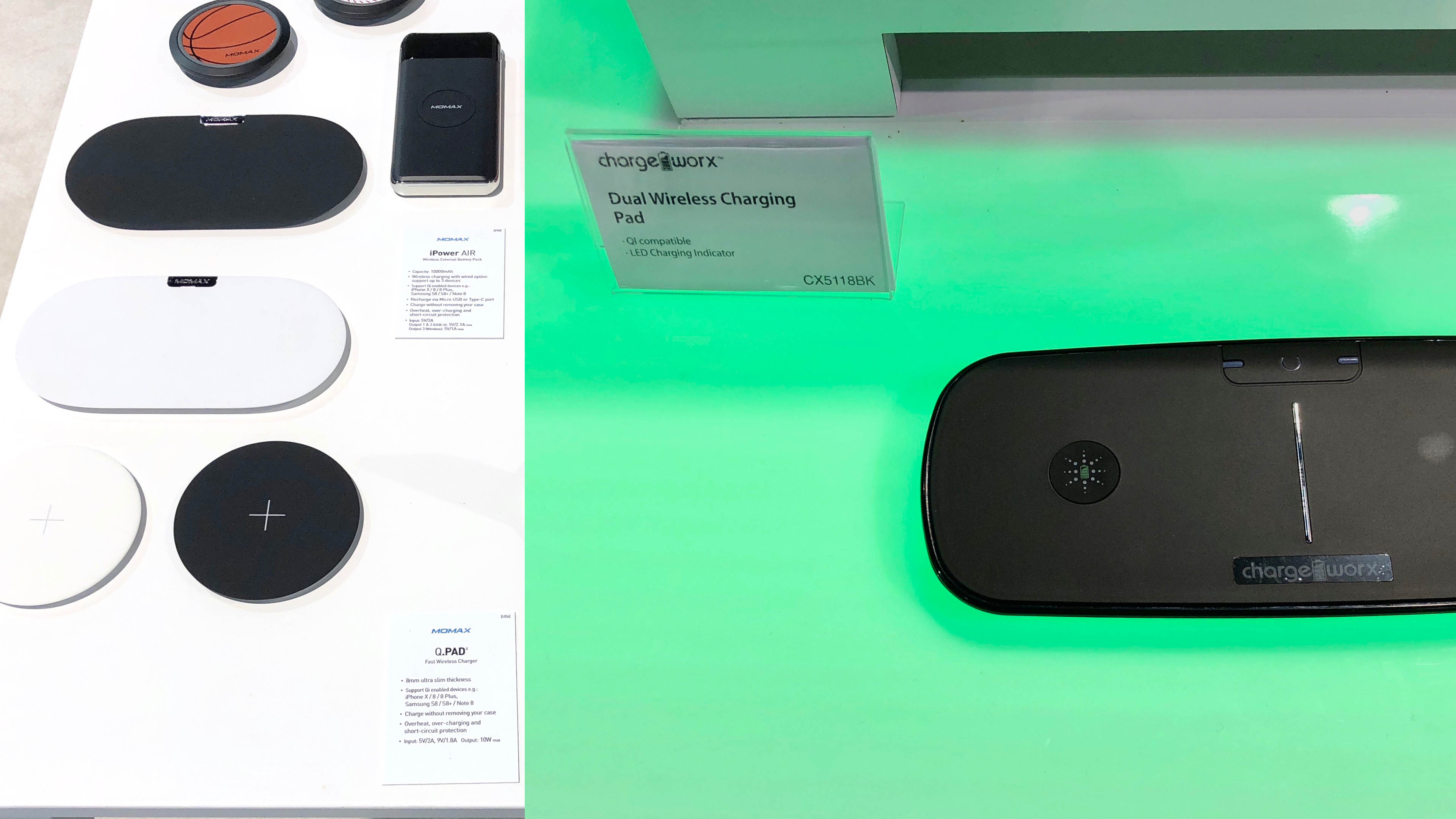 Clones of the Apple Watch aren’t exactly new, but for 2018, some companies are taking it a step further and attempting to create smartwatches that completely replicate the exterior case and band styling of an aluminum Apple Watch.

Aside from the size of the Digital Crown and placement of the side button, these manufacturers are succeeding, too. Design details as in-depth as color matching pins on the “sport” band have been considered, although you won’t find a model with a red dot on the Digital Crown.

Of course, where the knockoffs fall short is in terms of software. The kind of integration Apple offers between your Apple Watch and iPhone is a feature that even large third parties can’t match. Don’t expect to see Apple Watch knockoffs streaming your Apple Music playlists any time soon. 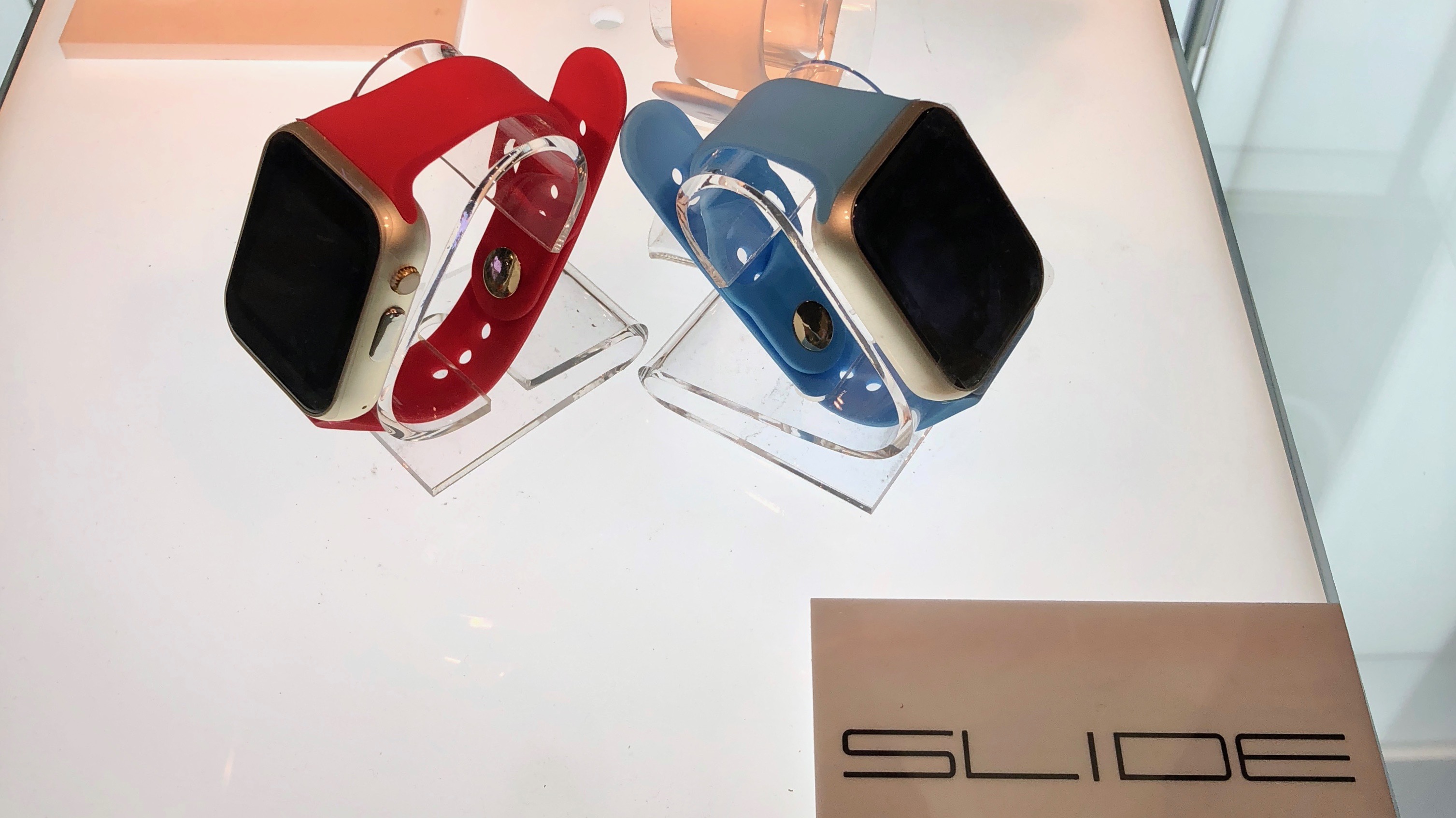 Worn out and hungry from traversing miles of convention center carpet, I spotted my favorite strange Apple accessory from across the room. Half-asleep and nearing delirium, I did a double take to make sure my eyes weren’t deceiving me, like a weary desert traveler spotting a mirage.

But no, it was real – a home button dongle for the iPhone X. Made by a Chinese company that has created a wide range of dongles for iOS devices, their newest accessory brings back the physical click of a home button, removed from the iPhone X.

Plug in the Lightning adapter, they promised, and you’ll have a fully functional Home button again (sans Touch ID). The dongle even includes a headphone jack and Lightning connector in the base, so you can charge your iPhone and listen to music like the good ol’ days.

Skeptical, I had to try it out myself. Sure enough, it worked. Single-click to go home, double-click for the multitasking interface. Even Siri was able to be activated with a long press. I’ve been thinking about this dongle ever since I tried it out. Would I ever use it? No. But it’s incredibly fascinating. 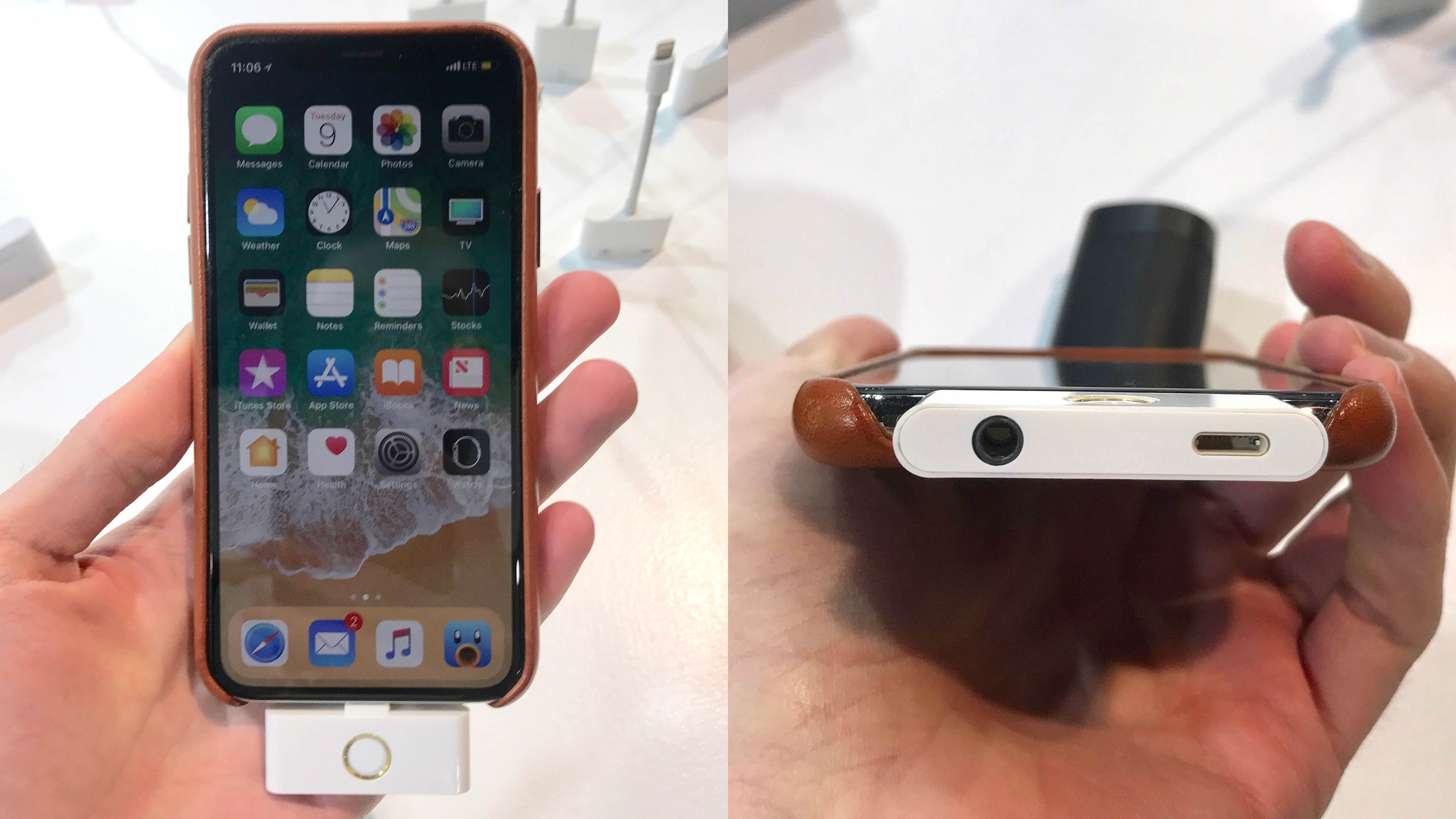 Soon, the tents will come down, the lights will go out (on purpose this time), and another CES will be in the books. You can be sure, though, that come next year at this time, a whole new crop of wild and copycat Apple accessories will debut. What do you hope to see?

You can keep up with all of the news out of Las Vegas with our CES 2018 Guide and check out our Best of CES 2018 Awards.