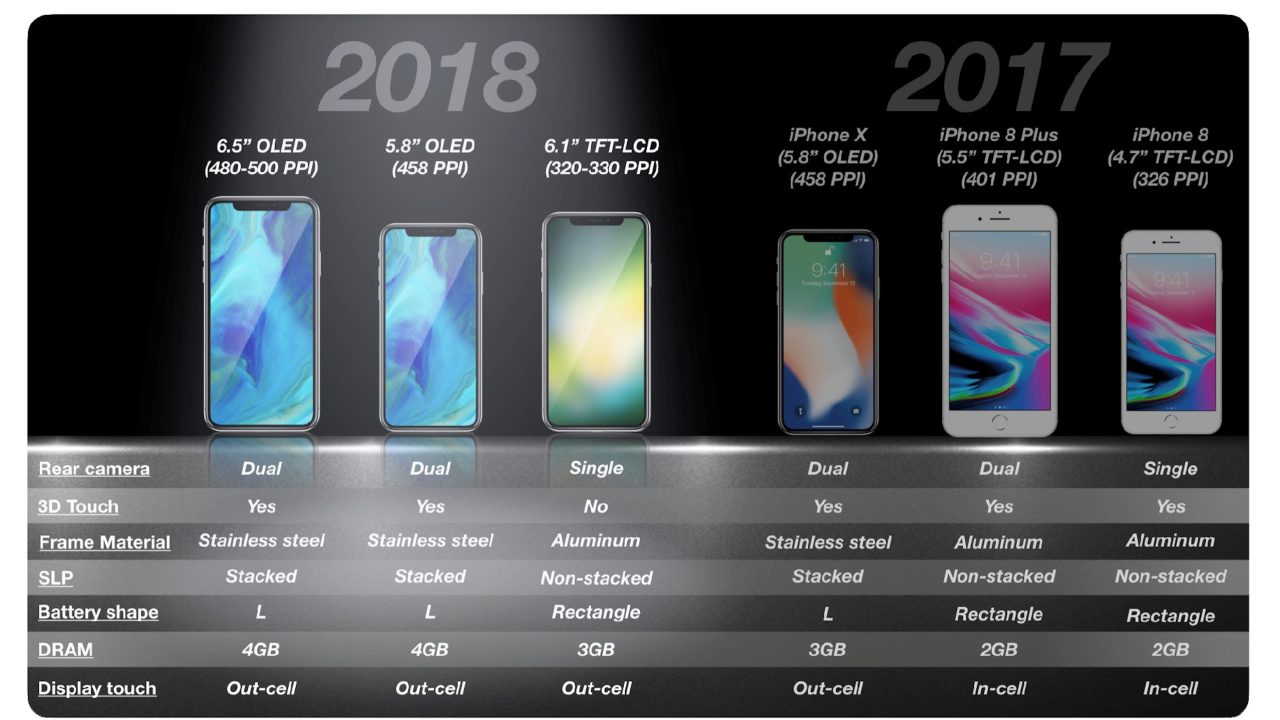 Reliable Apple analyst Ming-Chi Kuo of KGI Securities is today out with a new investor note offering more color on the new iPhone models coming later this year. Kuo predicts that Apple’s decision to bring the iPhone X design to additional models will cause an increase in sales, while also offering more information on specifications…

The analyst says the 6.1-inch LCD iPhone will feature a single rear camera design, as opposed to the dual-camera design of the other two models. Furthermore, it will feature an aluminum frame instead of stainless steel, and no 3D Touch. As for RAM, Kuo predicts 3GB for the LCD model and 4GB for both OLED models.

Furthermore, the analyst says the previously reported 6.1-inch LCD iPhone will likely account for “around 50 percent” for those shipments thanks to its lower price point.

However, Kuo reports that the development schedule of the 6.1-inch LCD iPhone is slightly behind the schedules of the 5.8-inch and 6.5-inch OLED models. Kuo also notes that Apple is likely to start “new iPhone model certifications earlier” than it did last year in an effort to avoid any shipping delays.

KGI has predicted that Apple’s 2018 iPhone lineup will include three new models: an entry-level 6.1-inch model with an LCD display and two OLED models at 5.8-inches and 6.5-inches. The analyst even predicts that Apple will stop making the iPhone X altogether as production of the new 2018 models ramps up this year.

Last week, KGI revised down its sales estimates for the iPhone X , due in large part to weak demand in China:

According to the report, Apple will ship around 18 million iPhone X units in Q1 2018 and about 13 million in Q2 2018. KGI expects the iPhone X to ‘go to end of life around mid-2018’ which would mean the device would sell around 62 million units total, significantly lower than its previous forecast of 80 million.

What do you make of a 6.1-inch LCD iPhone priced between $700 and $800? Is it something you’d be interested in? Let us know down in the comments.