After initially holding out on picking up an iPhone X, Steve Wozniak said last month that Tim Cook sent him one. While he hasn’t shared much about his thoughts on the flagship iPhone to date, last week he described some of his biggest frustrations with the iPhone X in a talk at the Nordic Business Forum in Stockholm.

Wozniak didn’t share strong feelings when he announced that he wouldn’t be picking on an iPhone X right away, but rather that he was satisfied with his iPhone 8.

After Cook sent Wozniak a X, he shared a reserved endorsement, saying “I kinda liked it.”

However, his latest thoughts on the iPhone X share criticism of the device. As reported by Business Insider, during his talk last week at the Nordic Business Forum, he brought up something that makes him mad which  is “when computers and machinery tricks you,’ and he used the iPhone X as an example.

He went on to explain that “I like things to be as simple and understandable and direct.” As Business Insider notes, he thinks these iPhone X issues go against Apple’s vision of creating intuitive and simple devices.

He also brought up the different actions when you press the Side button with other buttons.

It took me a few months to adjust to the new button combinations, particularly making sure to avoid holding down one of the volume buttons and the Side button for accidental 911 calls.

9to5Mac’s Zac Hall was just kidding around about using a command like “Siri, shut this thing down.” Siri responds by saying it’s beyond her capabilities. But interesting enough, Apple has built this into the smart assistants repertoire: 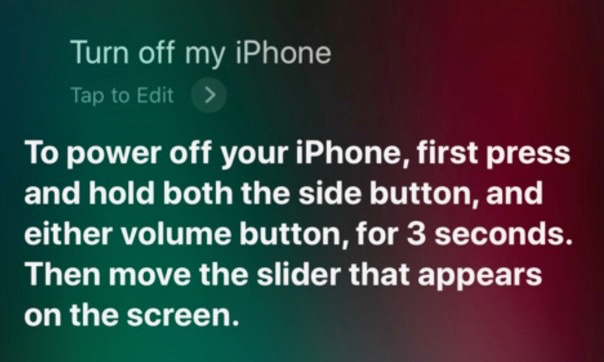 How about you? Have you adjusted to the new buttons and new combinations for the various actions easily? Or do you find the experience frustrating?