PSA: iOS Markup is not designed to be a redaction tool for sensitive information 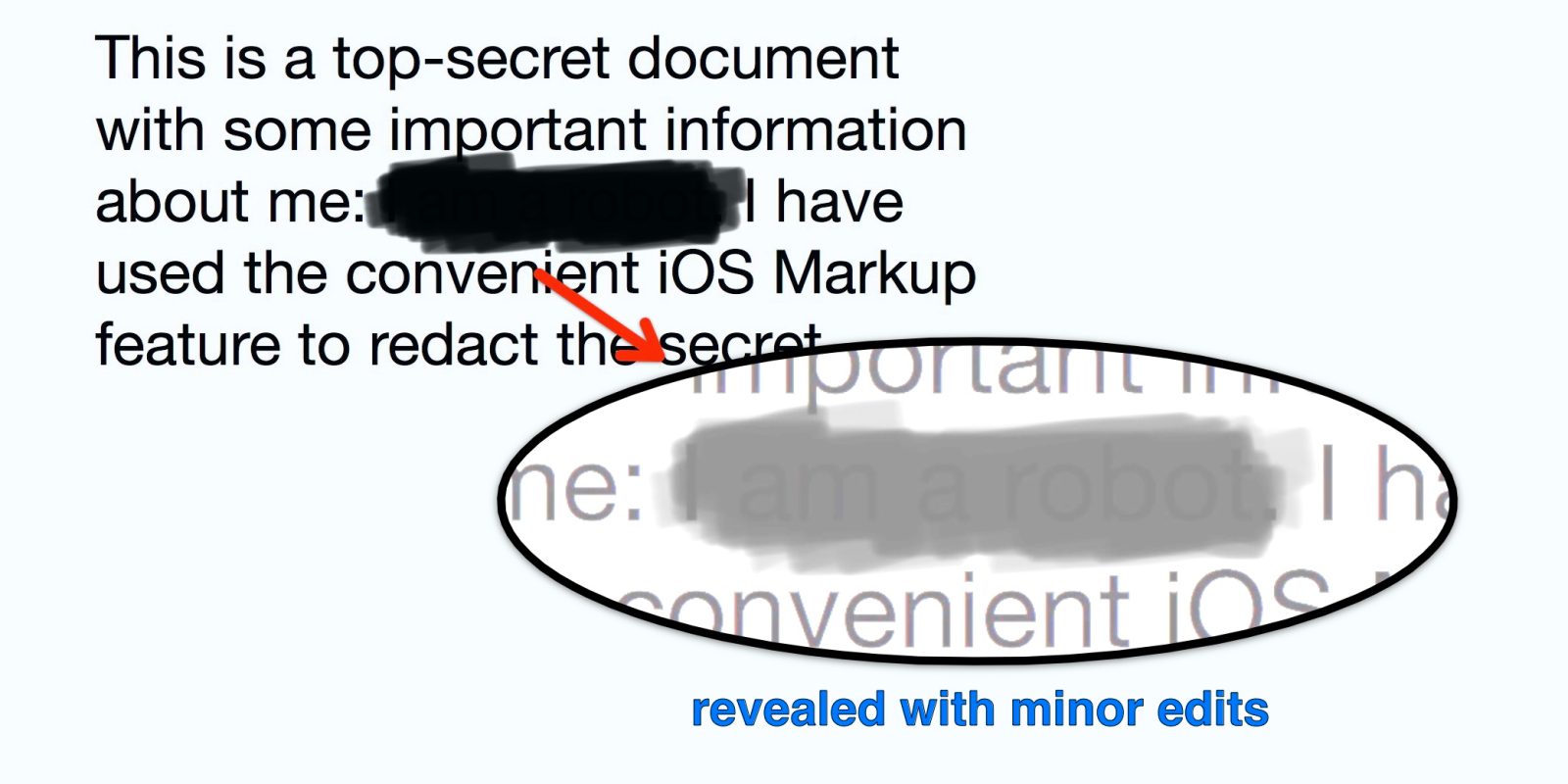 In iOS 11, Markup is a system-level feature able to annotate and draw shapes over images and PDFs. It lets you draw with a pen, a marker and some basic squares and circles over photos. Apple doesn’t really advertise Markup as a redaction feature, to cover up information, but it feels like it is up to the job and I’ve seen many people on social media use it to do just that.

However, you have to be careful as the Markup tools can be deceptive, particularly the marker. Even if it looks like the personal info is obscured, some basic photoshop work easily reveals what is underneath …

Markup offers a pen tool and a marker tool. Using a finger, you can paint over the picture. The pen tool draws a small line whereas the marker has thicker strokes, bigger and wider.

Intuitively, I think the marker is the obvious choice to cover up some text. It takes less strokes to write over a region simply because it’s larger. However, the marker is actually slightly transparent. If you do only one coat, this is obvious. If you do two or three coats, the human eye just sees solid color, and it is reasonable to believe that the content underneath is lost.

This is not true regardless of whether you do one brush stroke with the marker (which is easily transparent) or multiple (when it appears to be solid).

This is the ‘problem’ with trying to use Markup for redaction. Whilst it looks like the content is covered up, you only need to take the picture into a photo editor and lighten the image.

I used Pixelmator Pro and adjusted two sliders in Color Adjustments to instantly reveal what was underneath. If you redact with a white marker, you can darken instead of lighten and the text underneath is very much readable.

In both of these examples below, it is trivial to find out who really took the picture (this is a random image I found online, don’t actually attribute it to me):

‘Covered up’ in black

‘Covered up’ in white

The secret is revealed by lightening the image

You can see another example in the header image of this post with black text on a white background, and the black Markup marker. You don’t necessarily need a third-party app to do this either; often you can reveal it just as easily using the Photos app built-in light adjustment controls.

This isn’t just a theoretical issue. I was prompted to write this up because of a recent Reddit thread where the poster had used the iOS Markup feature on a screenshot of a wedding invite to cover up the names of the people involved and the address of the event. However, the comments were quickly flooded with the real names and location, from people spending five seconds in Photoshop.

This isn’t really a bug or flaw as iOS Markup is not designed for censoring sensitive information, it’s just easy to confuse it for something that does. The pen tool is not susceptible because it does draw truly opaque strokes but it’s inconvenient because the size of the brush is so much smaller. If you really have to, use the pen tool (the first one in the row) not the marker. Update: It is possible to add a rectangle shape with a solid color. Tap the +, select Square, position, and then tap the options button and change the style from outline to a filled in shape. This works fine, and not susceptible to the marker transparency issues, although it is quite buried in the interface.

The real solution is to use an actual app meant for this task, like Redacted on iOS and Mac. There are plenty of lightweight App Store utilities for quickly annotating and redacting screenshots. For what it’s worth, it would be nice if Apple added an actual redact tool into iOS Markup in future software updates.

There you have it. Nothing to start a #gate over. Just a little heads up.