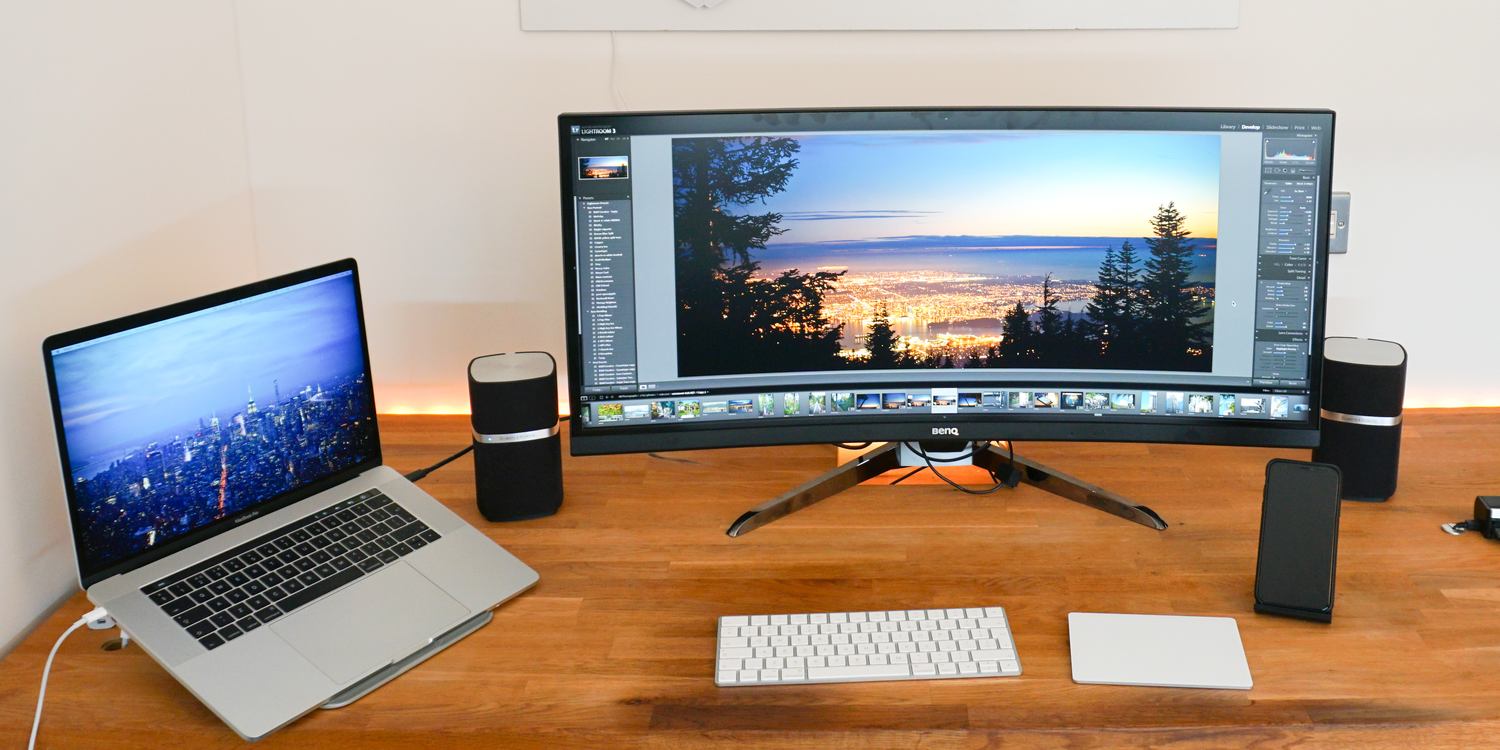 Back when I bought my 2016 MacBook Pro, I was kind of tempted to get all the expense out of the way in one hit and upgrade my monitor at the same time. The problem, as I wrote later, was finding someone to take my money.

What I really want now is to replace my existing two-screen setup – 15-inch MacBook Pro on the left, 27-inch Apple Thunderbolt Display on the right – with a single monitor.

That means I need something substantially wider than 27 inches and 2560 pixels. My colleague Jeff tested one candidate back in 2016, LG’s 34-inch UltraWide. But that didn’t tick all of my boxes, so I held out …

The problem is, some two years later, that monitor still doesn’t appear to exist. At this point, I’m beginning to suspect there’s a reason for that: we haven’t yet reached the point where such a beast would be remotely affordable.

That being the case, it seemed sensible to test one of the current offerings in this area to see whether a compromise might be workable. I tested one of the latest to hit the market: BenQ’s EX3501R. This offers the same 3440×1440 resolution as the LG, with an extra inch of width, at 35 inches.

On paper, it seemed plausible. It looked essentially like a wider version of my existing 27-inch Apple Thunderbolt Display. Same vertical resolution, but offered an extra 900 pixels of width that I hoped would make it practical to have three windows side-by-side rather than two.

Let’s start with some specifications for this particular monitor.

The first two things to hit you are, unsurprisingly, the width and the curve. Even with the display off, it already looks quite spectacular.

The casing itself less so. The feet of the stand are chromed metal, the rest is a fairly anonymous mix of black and grey plastic. There’s a BenQ logo in silver at the bottom centre, above the light sensor.

The stand design is attractive, though again with a lot of plastic. There’s a good range of height & tilt adjustability (see specifications, above), and it glides up and down pretty smoothly. There’s no swivel, though, so you just have to do this by moving the feet. That does, though, tend to be a one-off setup, so personally I don’t mind.

Overall, it’s quite hard to position this on a cheap-premium scale. The plastic tends toward a cheaper feel, the metal feet to a more premium one, but it’s the width and curve that jump out – and these say it’s something special.

I almost opened the review with the wow factor – because if you’ve never used a monitor like this before, as I hadn’t, that’s what you’re going to be saying when you first sit in front of one of these.

I’m a Brit, and we don’t do the whole ‘awesome’ thing, but even I’m tempted to use the word to describe the experience here. The sheer physical width of the thing is incredible. As you track from one side of it to the other, it just seems to go on forever. It’s like looking out over a stunning landscape, turning your head to take it all in.

Then there’s the curve. A flat monitor of this width wouldn’t have the same presence, I think. It would just feel like it was wandering away at the edges. But the curve makes it feel intimate as well as expansive. It feels huge, but not too huge.

The curve is an impressive one, at 1800R. The number means that if you joined a bunch of them together in a circle, the radius of that circle would be 1.8 metres. That’s a much tighter curve than the 3000R of many curved displays. The top and side bezels are also pretty thin; they certainly have the Apple display showing its age.

Finally, the screen is a matte one with an anti-glare coating. I had that years ago on my 30-inch Apple Cinema Display and loved it. Getting it back with this made me realize how much I’d missed it.

My main interest in such a wide monitor is to position multiple app windows side-by-side, but it’s full-screen mode that really blows you away. Looking through some of my landscape-format photos in Lightroom, for example, I had to resist the temptation to crop more of them just to fill the screen.

A couple of scaled-down examples viewed on a standard screen won’t do the experience justice, but the relative size of the text will perhaps convey at least some sense of it.

In Final Cut Pro X, too, the full-screen experience is fantastic, showing so much of the timeline along with a decent-sized video window.

And movies … ok, the curvature is only really suitable for sitting right in front it it, but talk about an immersive experience!

I’m sure the same would be true of games, though personally I lack the gaming gene.

My main aim, though, was to see whether it would work as a single screen for work. My normal setup is to have the 9to5Mac Slack chatroom running on my MacBook Pro, to the left, while my Apple Thunderbolt Display is split between two browser windows, one for reading, one for writing. I have each window set to around 1200 pixels wide, so I can have two of them side-by-side.

With those extra 900 horizontal pixels, I wanted to see whether I could get Slack plus my two browser windows all on the one screen. The answer was yes, just about. I did have to reduce the width of the Slack window, but yes, it works. (For confidentiality, I of course have to blank out the chatroom.)

The monitor does have some significant shortcomings, however …

One of my bullet-points was 87W power delivery, enabling a single-cable connection to the Mac. Despite a USB-C connection, however, the BenQ doesn’t support Power Delivery – at any wattage. This strikes me as really strange, and it doesn’t seem likely to be a bandwidth issue, as cheaper monitors from BenQ do support PD.

The BenQ also has some compromises on the ports front. First, with the USB-C one occupied by the Mac, you only have two downstream ports. I’d say three or four would be a more realistic minimum on an expensive monitor. Second, as bandwidth is limited, you have to choose between 60Hz and USB 3.0 speeds, or 100Hz and USB 2.0 speeds.

Second, accessibility – or lack of same. All the ports are oriented vertically downwards. That makes for neat cable management, but it is a major pain to insert cables. You can’t see a thing with the monitor on the desk, so the only way to do it is to lay it down flat. That’s really awkward on any desk given the size and weight of the monitor, and risks damaging it.

How much this matters depends, I guess, how often you insert and remove cables. For me personally, it’s not a major issue, as I don’t tend to often connect or disconnect cables (if I need to do something like plug in a camera, I’ll do it to the Mac rather than the monitor).

Anyone used to the Retina display of a MacBook will notice the difference with a non-Retina display. As my normal monitor is an Apple Thunderbolt Display, I’m used to that – and mostly find it doesn’t bother me at normal viewing distances.

However, with some fonts, text can look fuzzier than others. This is true of the ATD, but seems even more true of the BenQ. That’s not something I can accurately show in a photo, as pixels show up far more prominently in a photo than in real-life viewing, but it was something that significantly bothered me.

Finally, of course, the BenQ falls short on the ‘Apple aesthetics’ front. It’s not an ugly monitor by any means. It’s somewhere between inoffensive and moderately attractive depending on your tastes, but it is decidedly lacking in anodised aluminum.

I quickly concluded that LG’s UltraFine monitor wasn’t for me. Yes, the Retina display is great, but it didn’t tick many other boxes – and I really wanted something larger than 27 inches.

Trying the BenQ EX3501R has absolutely confirmed this: I definitely want a larger monitor, and I absolutely love the ultrawide format.

However, this particular monitor isn’t for me. I’m accepting that a Retina monitor in this format is unlikely, but the BenQ is noticeably less sharp than my existing ATD, and that’s too big a sacrifice. Similarly, I wouldn’t buy a USB-C monitor that lacks Power Delivery.

I do, though, know that despite these weaknesses, I’m going to miss it. My ATD is going to feel cramped when I go back to it. My decision for now is to try other similar-width displays and see how they compare. Watch this space.