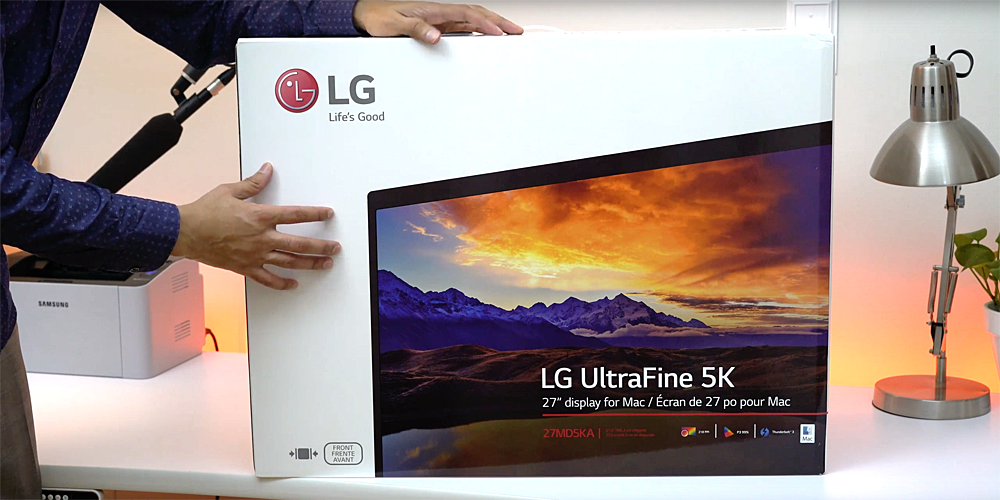 When I decided the time had come to spend a lot of money on a shiny new MacBook Pro, I was tempted to get all the expense out of the way at once and upgrade displays at the same time. The problem is finding someone to take my money …

I currently use an Apple Thunderbolt Display in my home office, and with the simple addition of a Thunderbolt 2 to 3 adapter was able to continue doing so. It’s a great display for its time, but is showing its age a little. The screen is non-Retina and doesn’t compete with the brightness and color range of the 2016 MacBook Pro. The bezels also look rather large by today’s standards.

The display Apple would like me to buy as a replacement is the LG 5K UltraFine, but I have to say that it’s not really grabbing me …

Sure, it’s a great display in some ways. First, it’s 5K. It would normally be used in 2560×1440 mode – offering a Retina version of my existing Thunderbolt display – but is capable of 5120×2880, meaning you could potentially edit a 4K video while viewing it at full resolution.

Second, it offers a single-cable connection to the 2016 MacBook Pro, carrying power, display, sound and USB connectivity. That makes for an extremely neat setup that is particularly appealing to someone who hates visible cables.

Third, the display quality is close to – if not actually matching – that of the new MacBook Pro. As my colleague Jeff Benjamin said in his hands-on video review:

The most compelling thing about this display, of course, is its screen […] It’s capable of delivering the same amount of on-screen real estate as the Thunderbolt Display, but it’s Retina-enabled, which makes it a whole lot easier on the eyes […]

The 27-inch glossy IPS display provides wide viewing angles and supports P3 wide color support just like the new MacBook Pro, along with panels that feature 500 nits of brightness. Unlike its smaller 4K brethren, the 5K display is also 10-bit, which will be great for serious video editing, photo editing, and color grading.

However, he did say that the display quality wasn’t quite up there with that of the MacBook Pro itself, and his review definitely qualifies as mixed.

For my own part, the LG display disappoints me in several ways …

First, and this may be shallow, but it isn’t going to win any design awards. I’m quite unashamed to say that one of the reasons I buy Apple kit is that I like visually pleasing designs. That was part of why I bought Apple’s own Thunderbolt Display last time around. There were cheaper alternatives – including models using the same display panel – but I was going to be spending many hours a day staring at it, and I wanted something pleasing to the eye.

LG’s 5K UltraFine display isn’t exactly ugly, but nobody is going to think Jony Ive had anything to do with designing it. There’s no anodised aluminum or glass surround in sight; what we get instead is black plastic. Decent-quality plastic, admittedly, but plastic all the same.

Second, and related to this, the build quality appears notably inferior to the monitor I already own. Jeff found that the display wobbled on its stand, and the angle adjustments ‘aren’t as smooth as they were on the Thunderbolt Display.’

Sorry, Apple and LG, but if you are jointly launching a brand new monitor in 2016, you could at least make the build quality as good as the one you launched back in 2011.

Third, if I’m paying for more pixels, I’d like to be able to use them. Making the monitor a Retina-standard display improves the look, sure, but I’d honestly rather have a larger display with a somewhat lower pixel density. In an age where TVs are all 40-50 inches and up, a 27-inch display is starting to feel a little on the small size. A 5K display – or a 4K one, for that matter, ought to still look stunningly good in a 32-inch or 34-inch size.

Even at Apple’s introductory pricing, I’d still be laying out almost a thousand bucks to get a display that’s the same size as the one I have, and with the same apparent resolution. I’m pretty loathe to do that.

Not do I want two smaller displays, with bezels breaking up the center of the screen, so a pair of the 4K models wouldn’t do it for me either.

Unfortunately, the display is quite anemic when it comes to additional ports, and this is where it fails to live up to the comparatively generous Thunderbolt Display. Outside of the one Thunderbolt port, which is used to connect your 2016 MacBook Pro, LG only provides three downstream USB-C ports, and these ports are USB 3.1 (gen 1) only, which means a maximum bandwidth of 5Gbps. That’s right, there are no USB-A ports, no SD Card slot, and the USB-C ports are glorified USB 3.0 ports.

Now, as Jeff notes, there may be good reason for this. To get from 4K to 5K, it seems LG had to employ some technical trickery which saturated most of the available bandwidth. But I’d far rather have a 4K display with downstream Thunderbolt 3 ports than a 5K display without them. It seems LG and Apple may have been prioritising that impressive-sounding 5K number over the actual usability of the display.

So for all these reasons, slightly tempted as I am by the quality of the display panel itself, I don’t think I’ll be buying one. At the very least, I’ll be giving it until close to the introductory pricing deadline at the end of March to see what else comes along.

So what would I ideally like? Here’s my wishlist:

One item on that list might appear gimmicky: the ‘ideally curved’ display. But I don’t think it is.

I’m on record as describing curved TVs as a pointless gimmick. They theoretically deliver a perfect image to just one person, and that one person would need to be sitting way closer to the screen than would ever be the case in reality – while everyone else gets a compromised view.

But curved, large-screen monitors make sense to me. Unlike a TV, there is just one person viewing, and they are sitting close to it. By gently curving the monitor, you can deliver a more consistent image across the full width of the screen, rather than the (admittedly small) drop-offs in quality you get while viewing the edges of a large monitor from a central position.

I’m not insistent on the curved part: it’s a nice-to-have rather than an essential criteria, but as I’m composing a wishlist for a product that doesn’t yet appear to exist, I may as well throw it in there.

We should see quite a few new displays launched at CES, and maybe one of them will be the one I’m seeking. I’ll be keeping my eyes open, but if you spot one which seems to fit the bill, do let me know in the comments. Bear in mind the 4K requirement, though: there are a lot of lower-resolution monitors out there, and I now view 4K as an entry requirement.