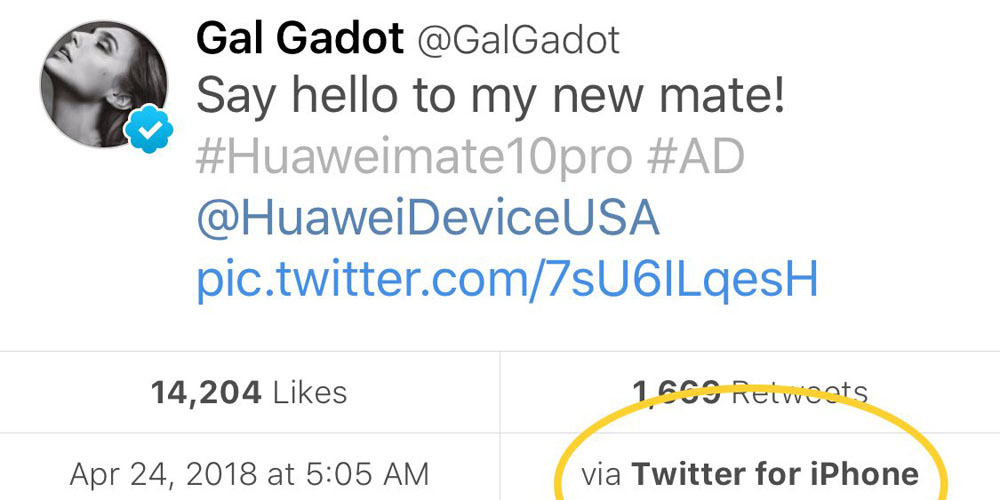 Gal Gadot, best known for the lead role in the Wonder Woman movie, became a ‘brand ambassador’ for Huawei earlier this year. In that role, she yesterday tweeted a glowing video about her new Huawei Mate 10 – with just one small problem …

As tech reviewer Marques Brownlee spotted, the tweet was sent from Twitter for iPhone. Gadot has since deleted the tweet and replaced it with a new one.

Gadot’s publicist told CNET there was a perfectly innocent explanation.

“Some people have asked about my recent post with my new Huawei smartphone, and think I am using an iPhone,” Gadot said through her publicist. “That’s simply not the case. I love my Huawei P20 and Mate10Pro. They are lifelines wherever I am in the world.”

It seems that a member of Gadot’s publicity team posted the video on the actor’s behalf, from their personal device, not recognizing that the device used might be visible to others.

“Sometimes I rely on help from my team to post larger videos,” Gadot said, “And that is what happened here.”

People and companies have been getting caught out by that pesky ‘Twitter for iPhone’ tag for years now. Back in 2014, LG poked fun at the iPhone 6, from an iPhone. In 2015, BlackBerry promoted its Instagram account also from an iPhone. And in 2016, Donald Trump called for a boycott of Apple products, once again from an iPhone.

Easier for individuals than companies to blame a member of their team, of course.