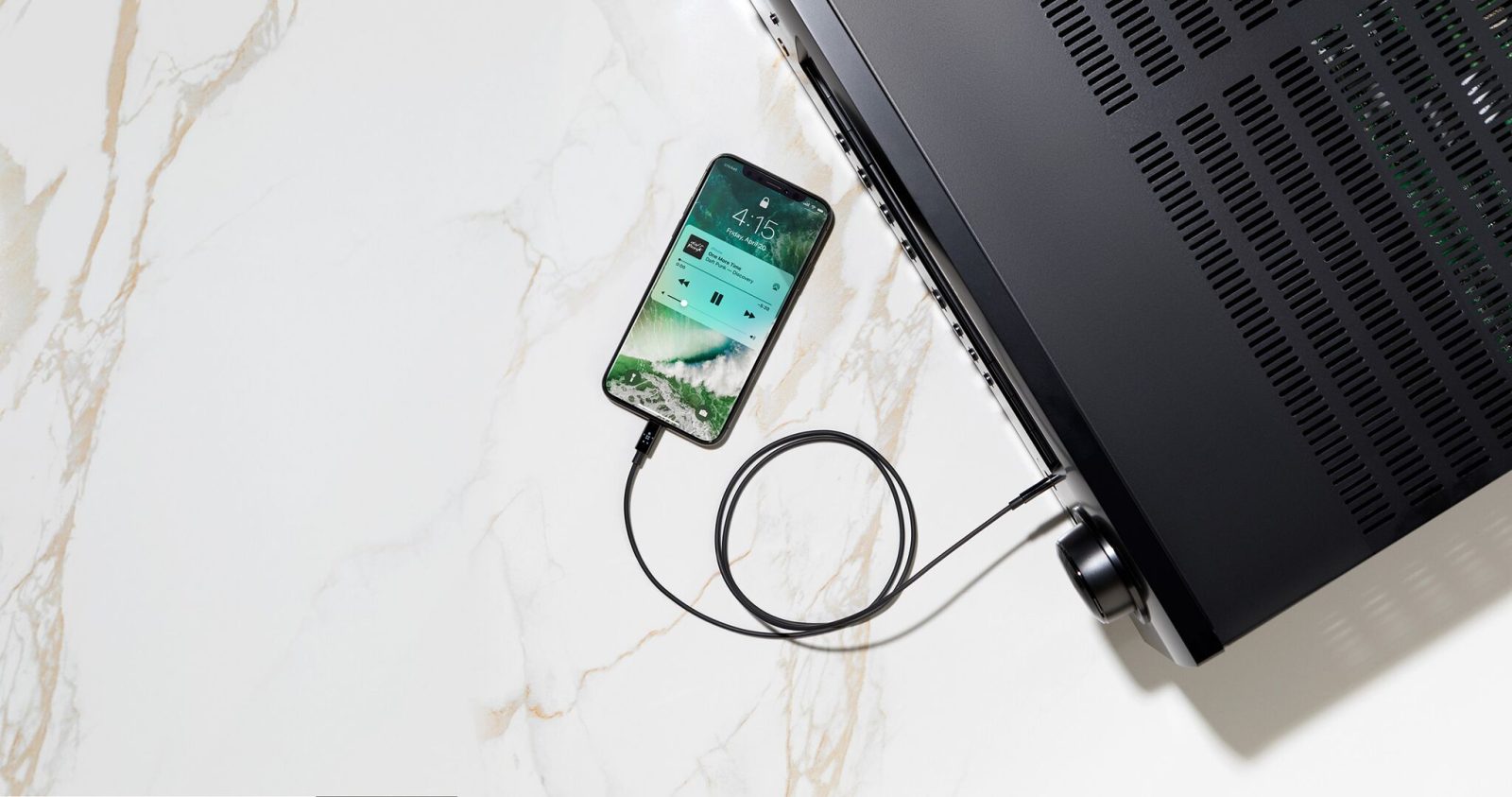 Belkin today has introduced its 3.5mm audio cable with Lightning connectivity. The company touts that this cable will let users directly connect their iPhone to a 3.5mm audio player, such as a car stereo, without the need for an adapter.

Belkin’s 3.5mm cable with Lightning connectivity joins the company’s other Lightning audio accessories. In 2016, the company released its Lightning Audio + Charge RockStar accessory, which allows users to charge their iPhone and listen to music at the same time. With that product, however, you’re still required to use a Lightning to 3.5mm adapter.

The 3.5mm to Lightning cable means users can directly connect to any accessory with a female 3.5mm connection, such as a car stereo, home speaker system, and more. Belkin says it converts digital signals to analog signals to ensure high-resolution audio:

The new cable outputs high resolution audio by converting digital signals to analog. It is available in multiple lengths, giving consumers the freedom to listen to music and other content at home or in the car.

Despite the fact that Apple ditched the headphone jack with the iPhone 7, the company only just recently added specifications for Lightning to 3.5mm cables to its Made-for-iPhone program. Belkin isn’t the first company to tap into support for Lightning to 3.5mm cables. Master & Dynamic introduced its take last month, though it’s a bit pricey at $69.

Belkin’s 3.5mm to Lightning cable is available today in 3- and 6-foot lengths. The cable costs $29.99 or $34.99, respectively. It will be available on Belkin’s website today and through Apple Stores in the near future.

LOS ANGELES – May 22, 2018— Belkin®, the market leader in mobile accessories, today announced pre-order for its 3.5mm Audio Cable with Lightning Connector which allows iPhone users to connect directly to the car stereo or home speakers with a single cable. The new cable outputs high resolution audio by converting digital signals to analog. It is available in multiple lengths, giving consumers the freedom to listen to music and other content at home or in the car. Belkin has been creating audio accessories in recent decades from cassette, to FM, to Bluetooth, to digital audio. Belkin’s growing portfolio takes its nearly 30-year audio legacy into the digital age.

Belkin has been making audio products for nearly 30 years when the company launched its first stereo cables and has since sold more than 55M audio accessories to date. Some notable legacy audio products are highlighted in this timeline.

“Bringing our audio legacy into the digital realm is a natural progression of Belkin’s mission to connect people to the experiences they love most,” said Melody Saffery, senior director of product development, Belkin. “Most of us are music lovers, and the ability to work on technology that can make other music lovers’ lives more fulfilling, better and more connected, inspires our teams to continue innovating.”

The 3.5 mm Audio Cable with Lightning Connector is available for purchase today on Belkin.com and will be available in the coming weeks at Apple Retail, Best Buy, Target, and other retailers worldwide.

Belkin® developed its first people-inspired products in 1983 with cables that quickly led to the development of the first intelligent cable that connected an Apple IIc, Apple’s first portable computer, to a printer. Today, nearly two Belkin products are sold every second globally. Designed in Southern California, and extending across four pillars—power, productivity, protection and connectivity – Belkin products include award-winning lines such as the Valet™ Charge Dock for Apple Watch + iPhone, DuraTek™ Cables, RockStar multi-port solutions, QODE™ keyboards, Boost↑Up™ charging solutions, and more including USB-IF certified USB-C accessories, wireless charging docks, and solutions for Android systems. Belkin’s next generation ScreenCare+ and TrueClear™ Pro screen protection service applies state of the art protection with unparalleled accuracy and is available at select leading retailers worldwide. A privately held company, Belkin has more than 1,400 employees with products sold in more than 50 countries around the world.