Review: Lumos and Coros bring Bluetooth helmets to bikers with lights and music 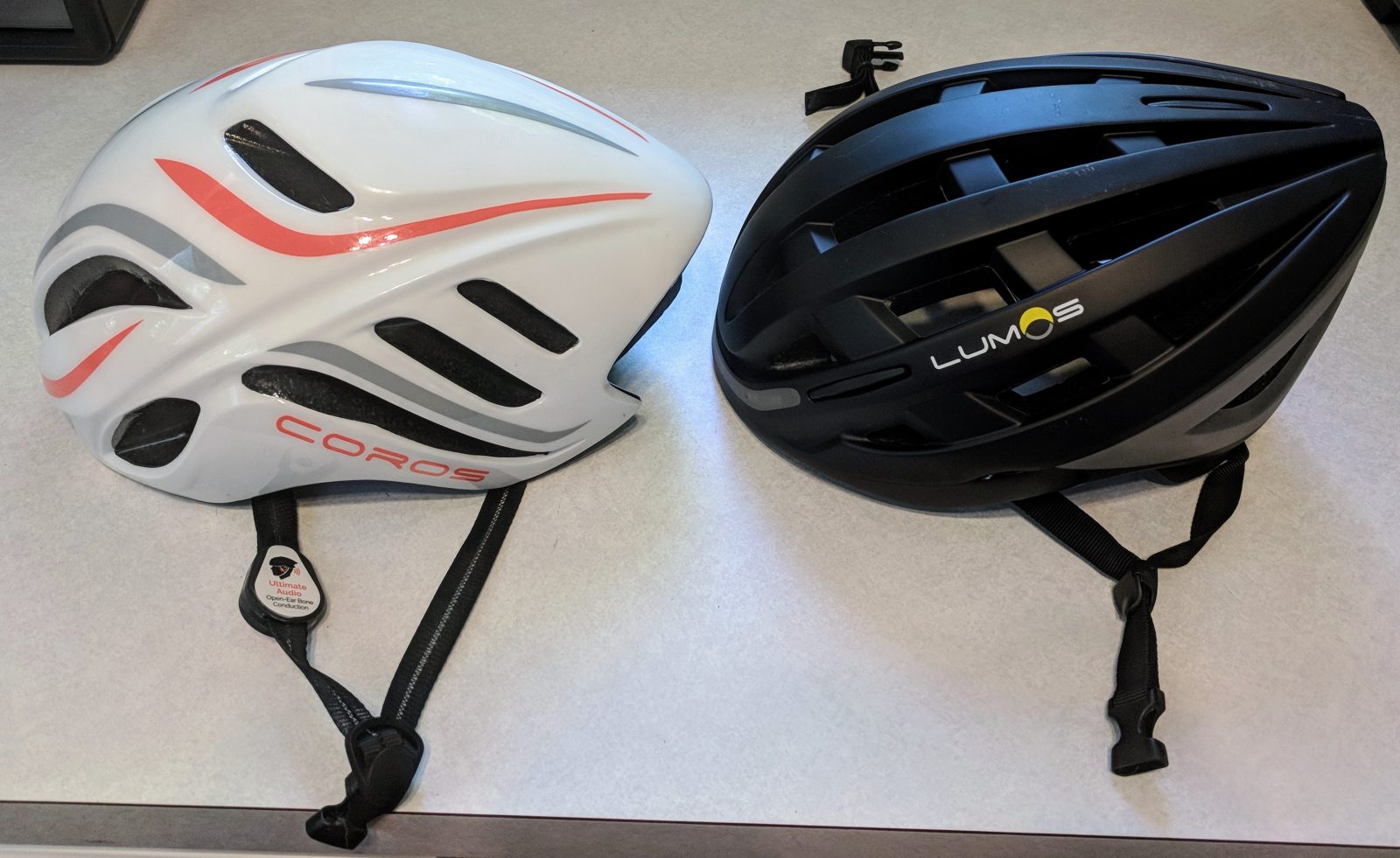 If you are like me, Spring means biking season and I want to tell you about two great bike helmets that connect to your iPhone via Bluetooth to not only make your ride more safe but also more fun too. For over a year, I’ve had the Coros LINX helmet which uses bone conducting conduits to safely send audio signal to your eardrums without blocking natural sound.

A few weeks ago I peeped the new $179.99 Lumos Helmet at the Grand Central Apple Store touting bright lights and a turn signal activated from your phone.

First, let’s get the names out of the way: Lumos and Coros, which sound like siblings from the planet Krypton but they are Bluetooth bike helmets made by 2 separate companies with 2 separate agendas. Despite this, there’s a lot in common here. They both offer Bluetooth 4.0 on already great fitting helmets that will last for years.

Both helmets are so light you probably wouldn’t guess that they include all of the electronics and batteries to keep them going for 6-8 hours. The straps are durable and the fit is spot on for my “Large” dome. They each cost around $180-$200. 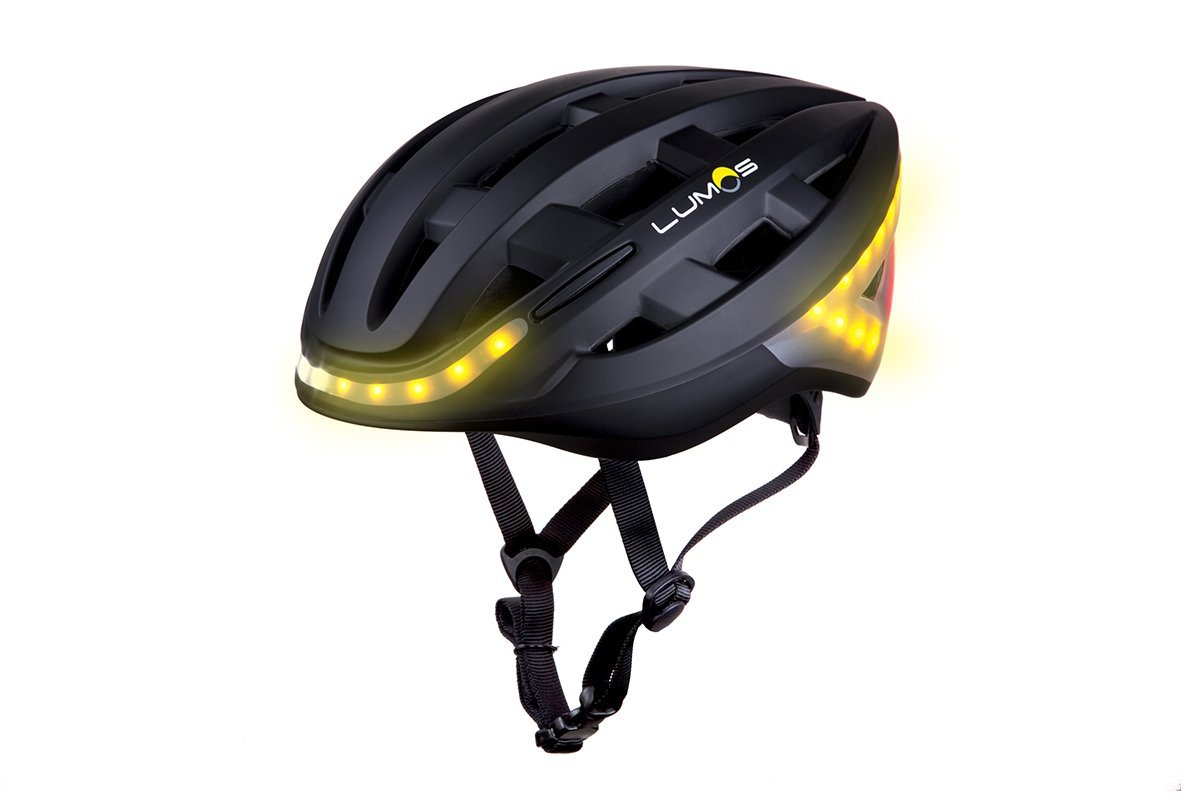 The Lumos is all about the LED lights. It features:

The lights are very bright and activated by hitting an easy-to-find button on the back of the helmet for one second. You’ll get a whistle sound and the 1st mode is slow flashing white lights on the front and red lights on the back. Subsequent button presses will increase the blinking speed, then stop the blinking and finally turn off again.

My first instinct was that the white LED on the front would light my way in darkness. However, they aren’t meant to do that and you should probably keep your front headlight.

They are meant to alert oncoming traffic, which work tremendously – sort of like daytime running headlights, they work both at night and during the day (although most useful at night).

Lumos includes an easy strap-on turn signal which connects to your helmet and allows you to signal which direction you plan on going. 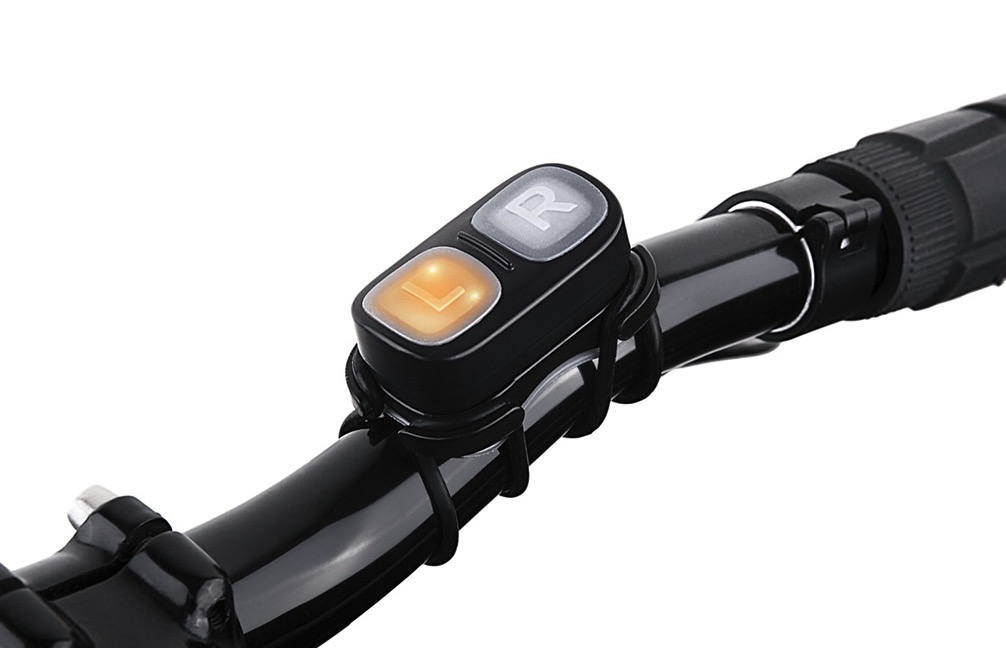 At this point, you may be asking where the Bluetooth comes in? Glad you asked.

Lumos does this pretty awesome integration with your Apple Watch which allows you to make the gesture for right and left turns with your left arm (sorry lefties) and the helmet actually uses that gesture to display a turn signal. Oddly this function works fairly reliably. In addition, an iPhone App records your ride activity and uploads it to Apple Health or Strava in my case.

After a firmware update it says it will enable automatic brake lights that rely on momentum to establish braking. I wasn’t able to test this reliably but it is something to look forward to.

For me, the Lumos is all about the safety. I happily wear this helmet any time I’m riding on unsafe streets or at night. After initial setup it is easy to forget you are using it and I highly recommend it to anyone who is worried about bike safety. 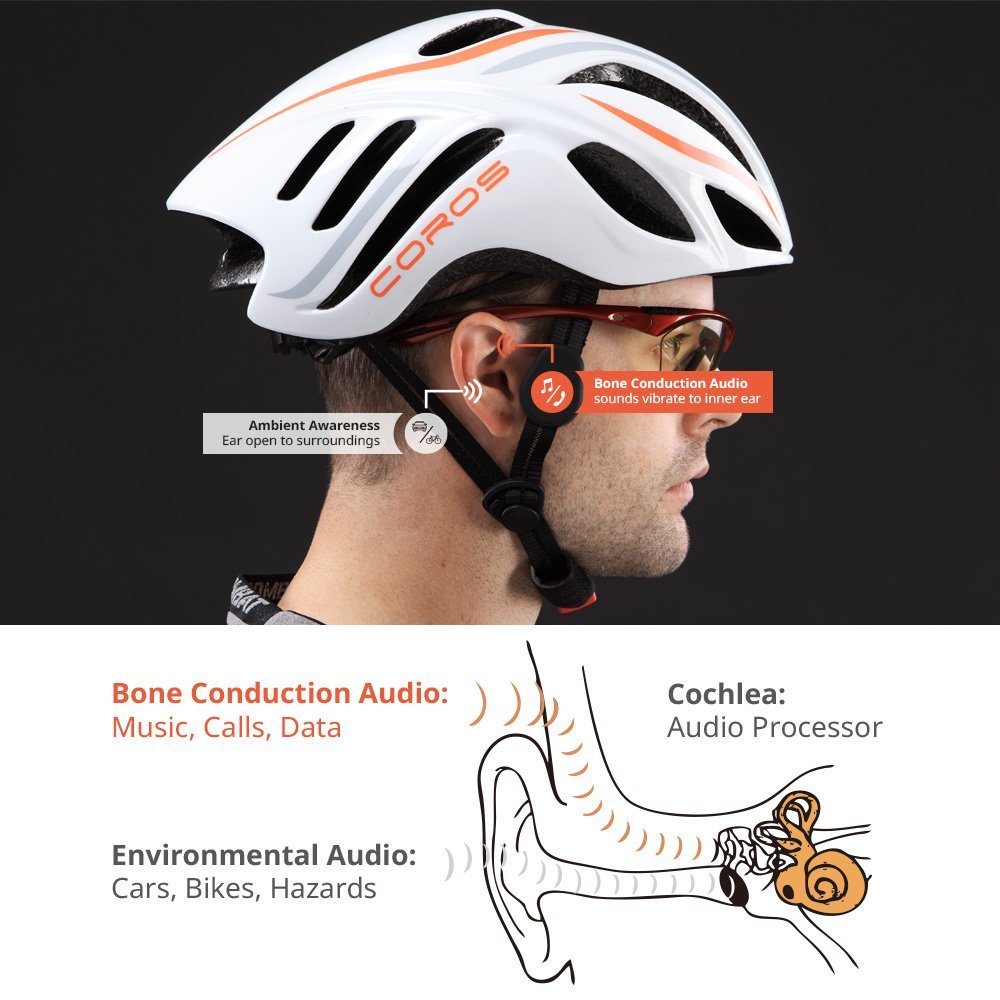 The Linx has been my go to Bike helmet for almost two years. As a testament to how well it is made, I even take it out when I don’t plan on listening to music. It is just as lightweight (almost), aerodynamic, and breathable as a “dumb helmet”.

The big selling point of the Coros is that it safely plays music and podcasts while you ride – for 8 to 10 hours so. Even those marathon centuries should be doable. The music is pumped how you’d expect through a Bluetooth connection from your smartphone however instead of directing the music into your earholes, Coros instead plays on a small transducer (speaker) module that rests against your cheek bone. This routes the sound into your ears without blocking your earholes which is important for hearing oncoming traffic and other dangers around while biking.

How’s the sound? Let’s just say don’t throw away your QC35s. It is somewhere in the medium to good range with me wanting more volume. My beard hair was getting between the transducer and my cheek bone but may vary but I certainly do get pumped up from music played through them and at the same time I can hear podcasts and talk radio very clearly. But most importantly, while you are listening to your music or podcasts, you can hear everything around you. 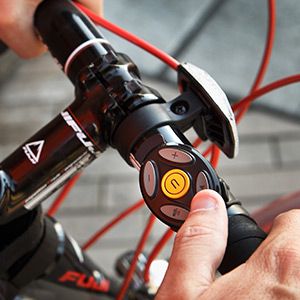 What’s great here is that it works like any headset – you can even make and take calls. Coros has a handlebar mount that doesn’t require reaching for your phone or to the helmet to change volume, skip songs or take a call.

I typically put the Coros on for safer rides around the neighborhood or on bike paths and roads where there won’t be much traffic. Safely listening to music or catching up on Podcasts makes a bike ride all that much more fun.

If you are looking for the best of both worlds, Coros has a new Helmet called the Omni which includes some safety lighting (though much less than the Lumos). I’ll be looking to test the Omni out in the future.

If you are serious about bike riding or know someone who is, dropping $180 on a bike helmet that improves the experience is a sound investment.

With these two products you can get a much safer ride and one that is more enjoyable at the same time. 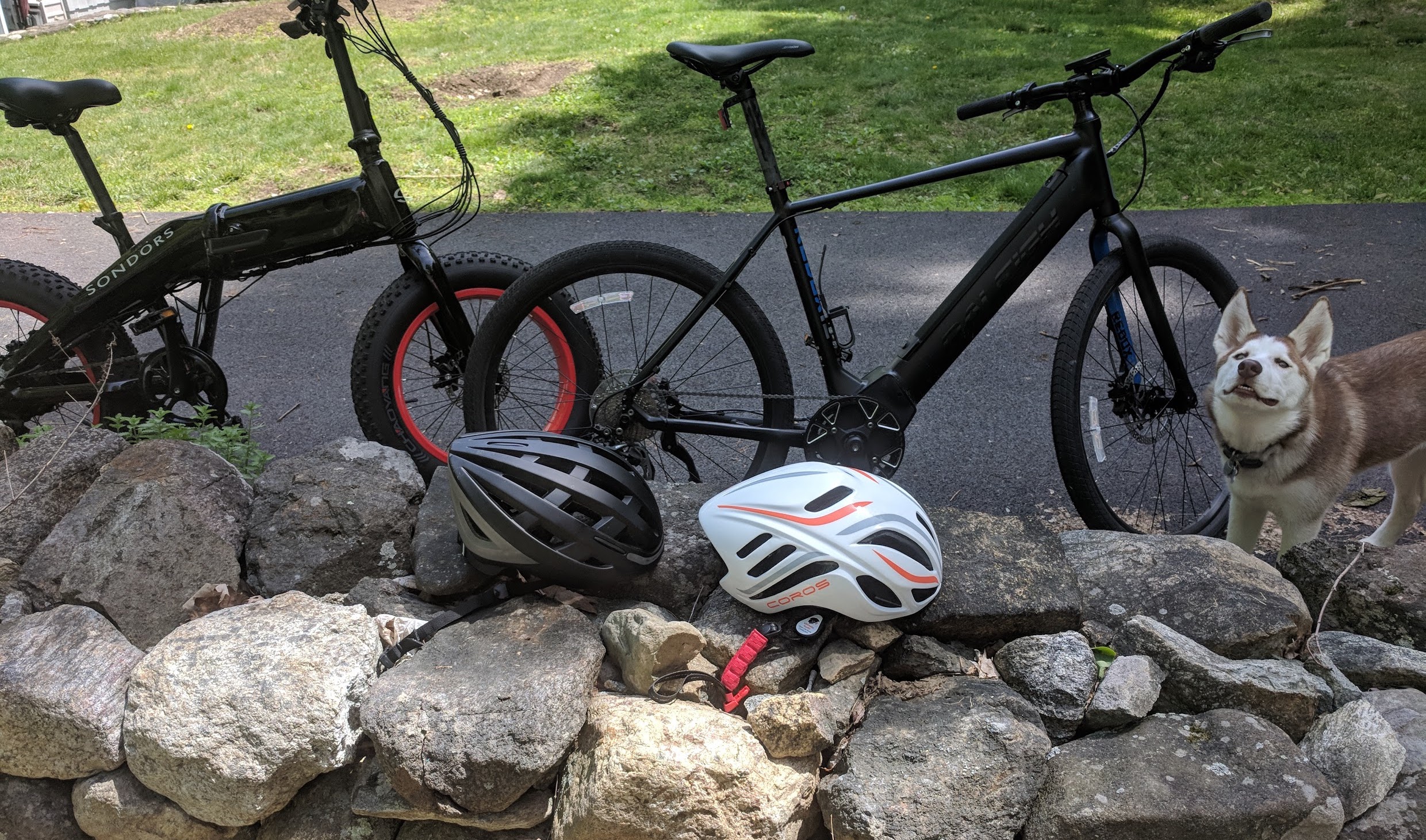