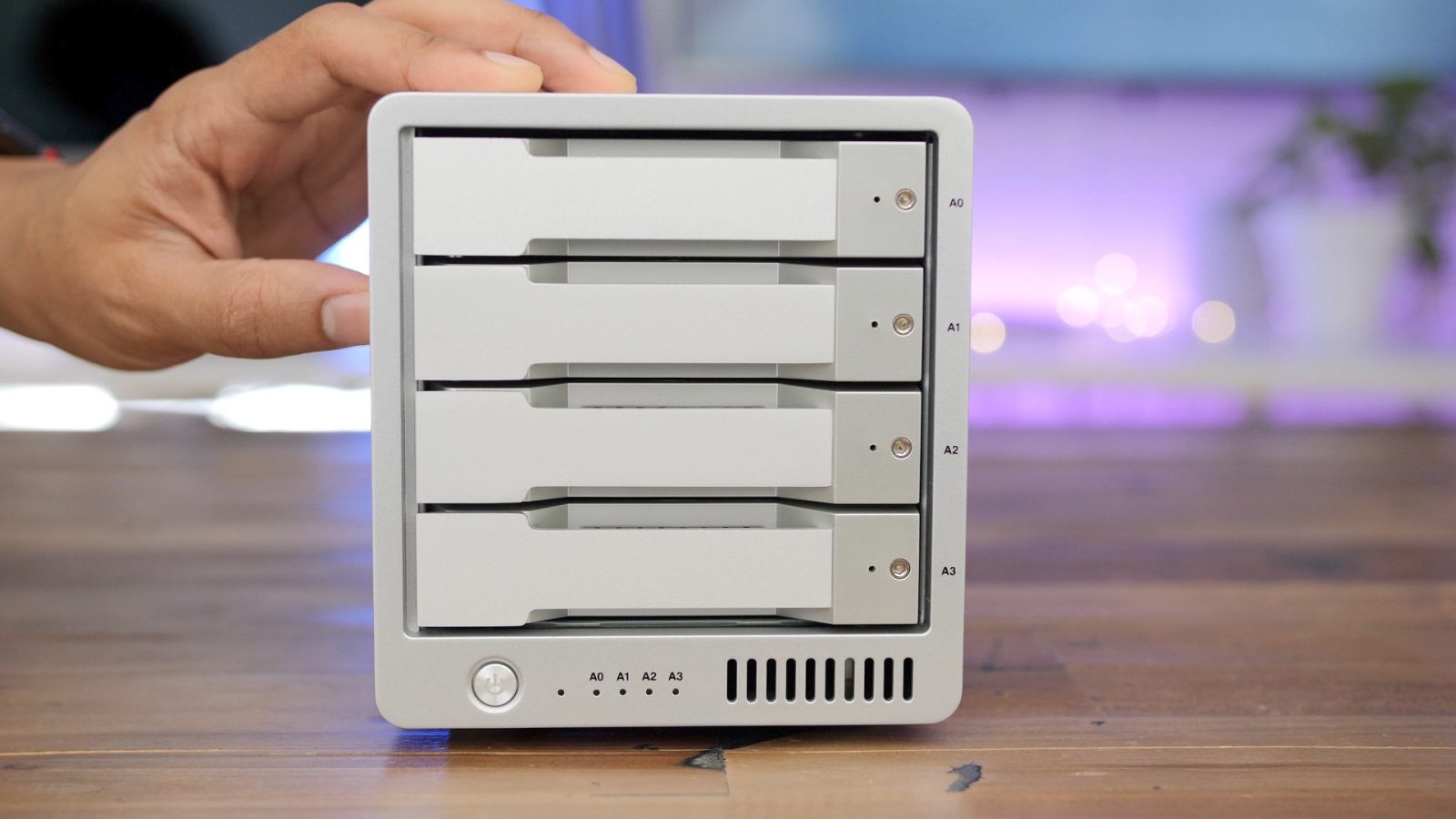 I’ve covered tons of Thunderbolt 3-enabled devices over the years, and it’s become clear that CalDigit is one of the leaders in this space, especially when it comes to docks and external drive enclosures. The company’s latest product, the T4 RAID storage enclosure, starts at under a grand, comes with dual Thunderbolt 3 ports, and brings 4-bay external storage, DisplayPort connectivity, and Power Delivery to the table.

How might the die-cast aluminum RAID storage enclosure fit in a MacBook Pro user’s workflow? Watch our hands-on video walkthrough for the lowdown.

Like so many CalDigit products that I’ve tested in the past, a heavy emphasis is placed on the T4’s build quality. The die-cast aluminum chassis is durable, helps remove heat, and when combined with mechanical hard drives, is quite heavy as well. This isn’t the type of Thunderbolt 3 peripheral you’re going to want to travel with, especially considering its massive power brick; it’s clearly designed to work as a stationary desktop unit. 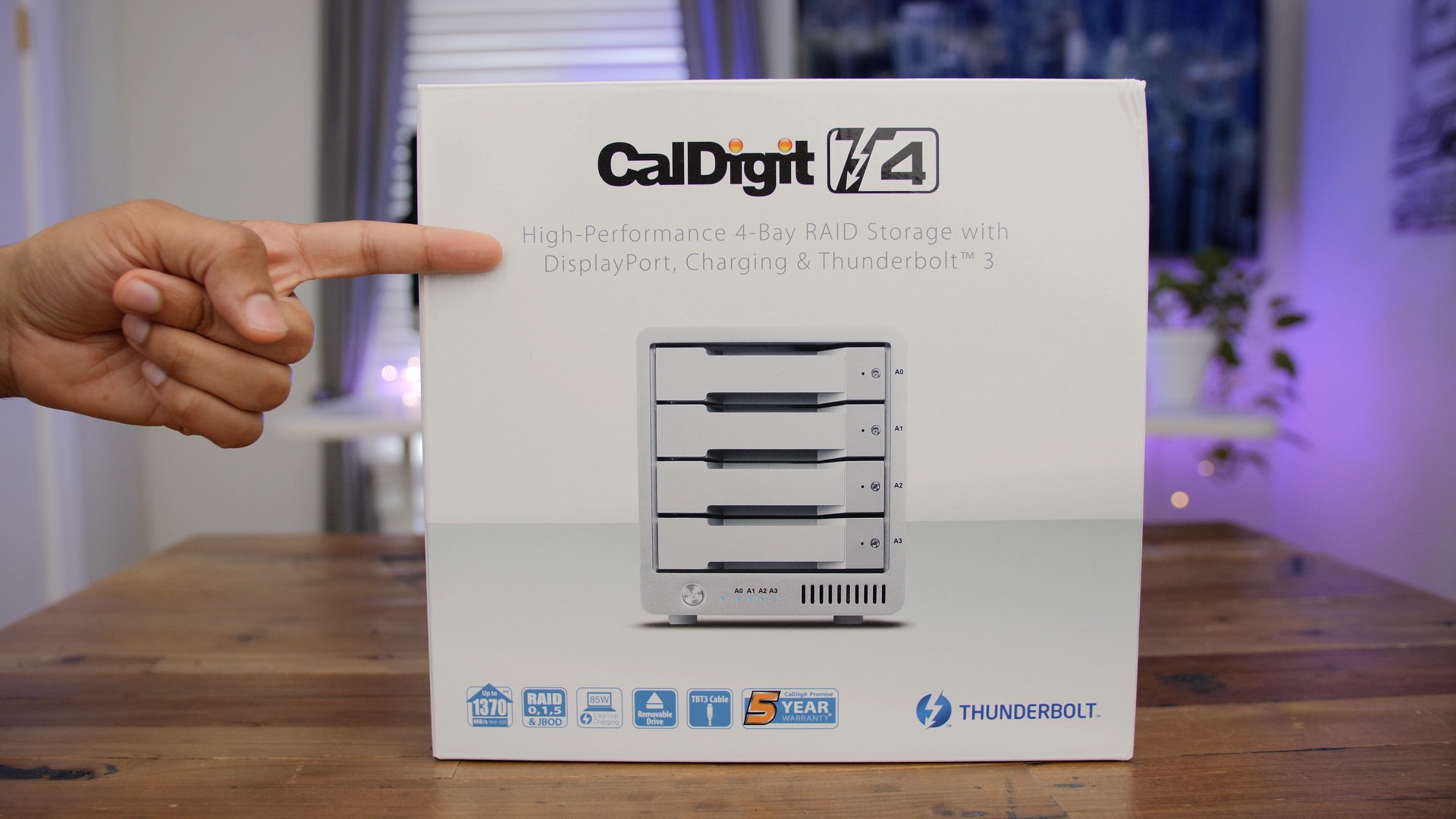 The CalDigit T4 uses the same drive enclosures as the AV Pro 2 that we reviewed last fall. This means that the drive modules are interchangeable between the two, and the T4’s design language is similar, but obviously much larger. 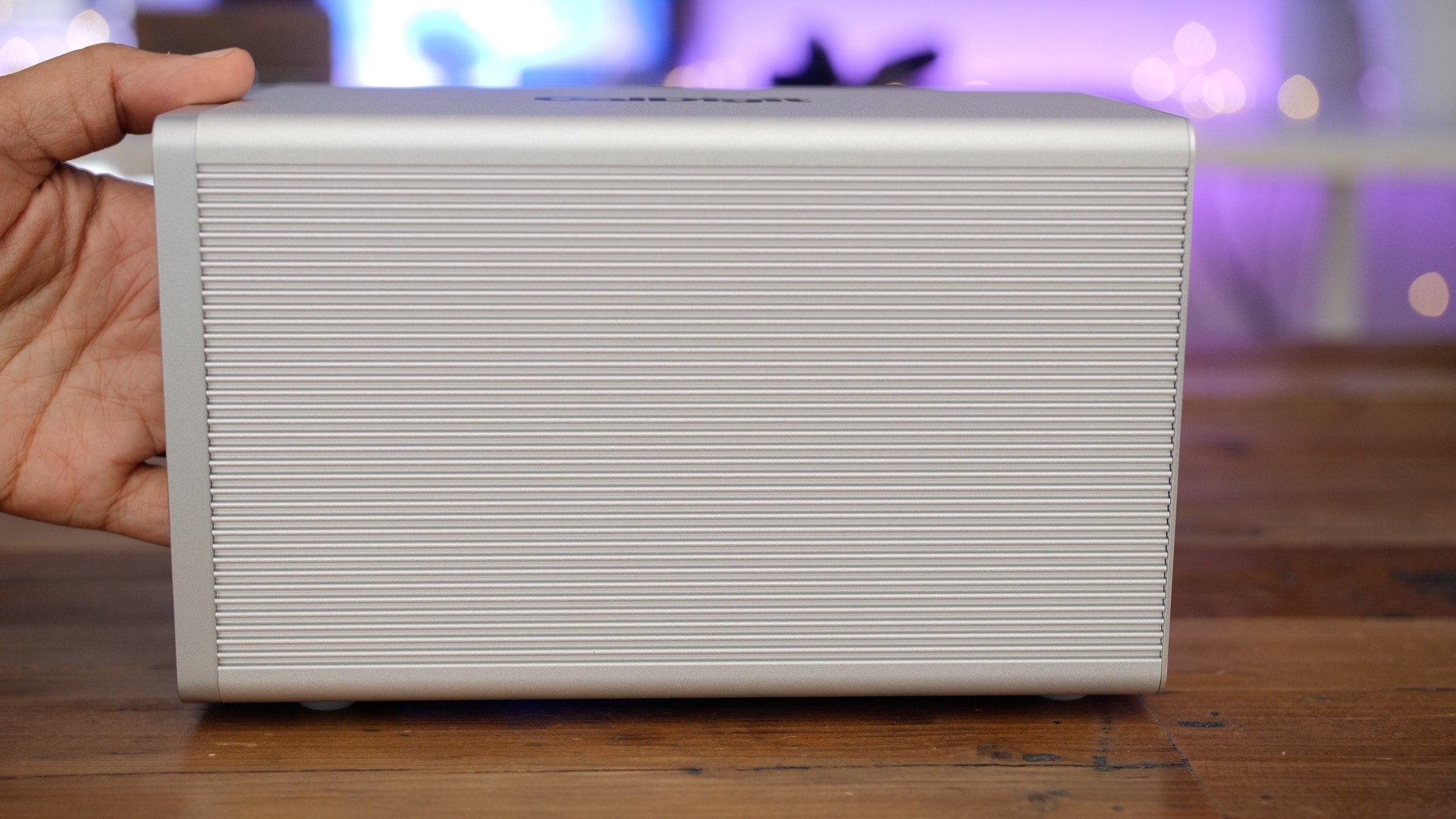 CalDigit design has always leaned more towards the utilitarian, industrial look, and the T4 is no different. The ridged enclosure with its four drive bays and array of flashing LEDs screams business, and the sheer amount of storage (up to 32TB) that can be configured marches along to the same beat. 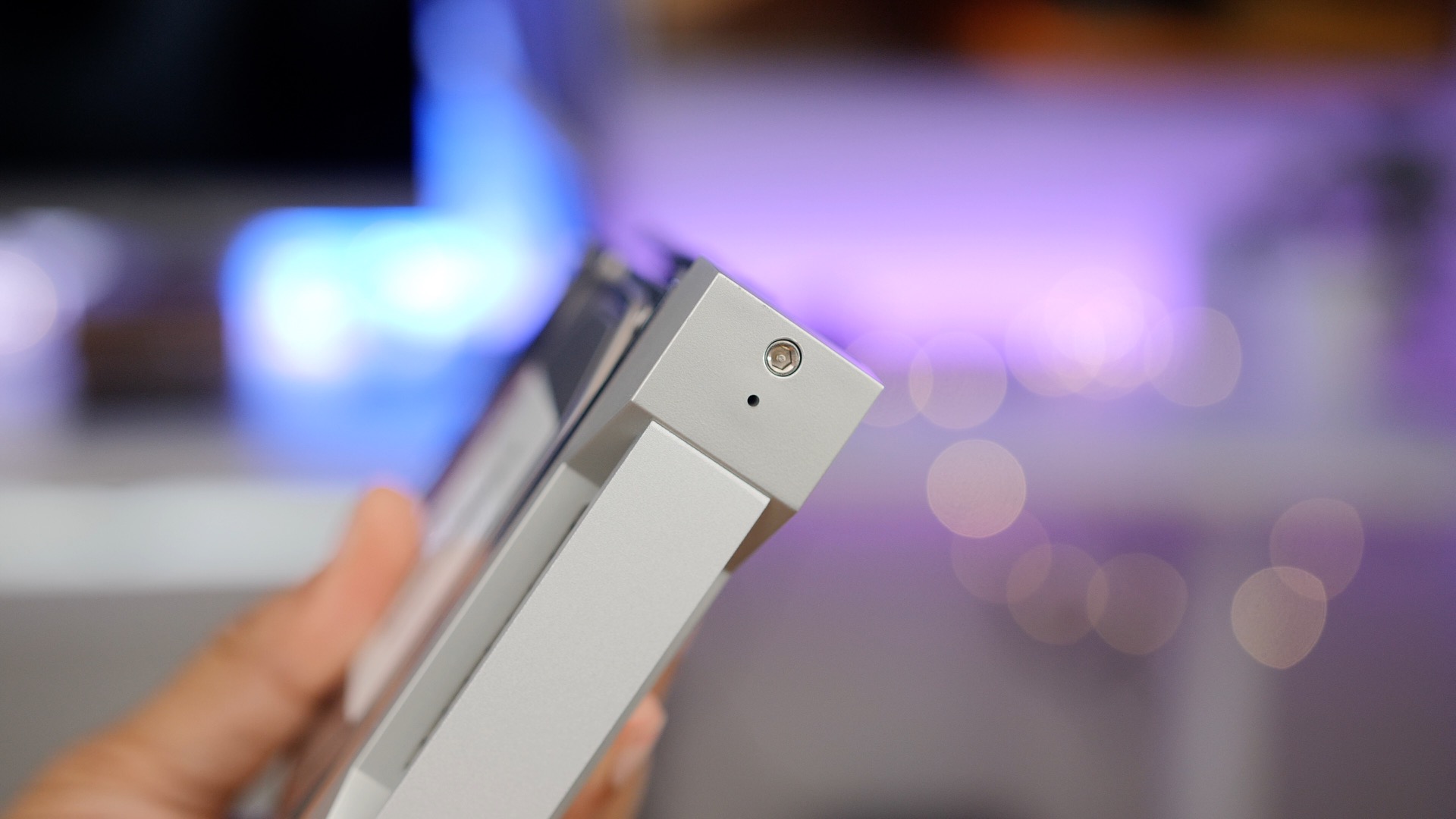 CalDigit provided me with a 32TB (HDD) version of the T4, which means four 8TB HDDs that can be configured in either RAID 0, RAID 1, RAID 5, or a JBOD setup. This gives users lots of options for prioritizing speed, data integrity, or a combination of the two. 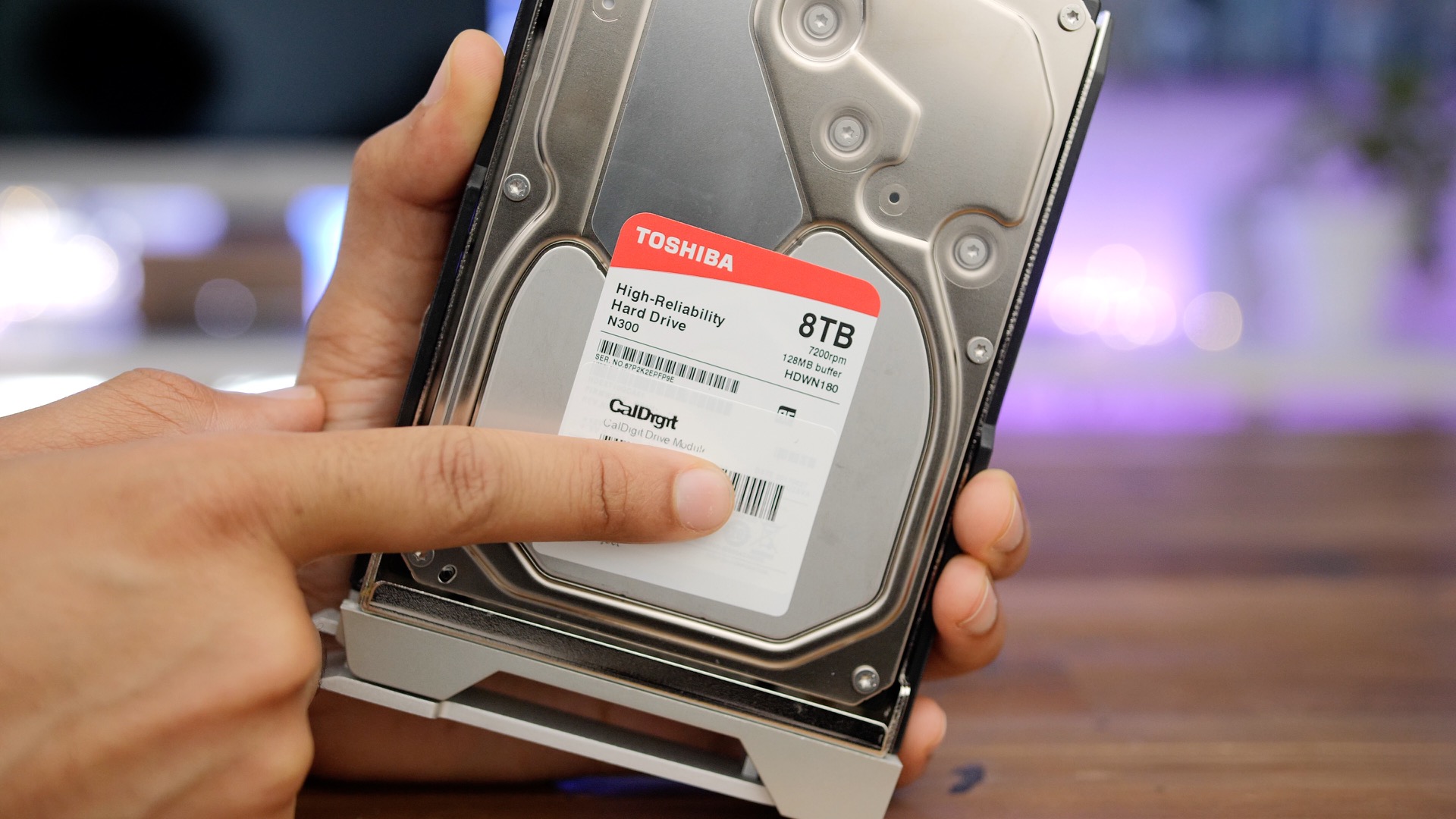 Users are also allowed to mix and match different types of drive configurations. For example, it’s entirely possible to set up two drives with RAID 0 and another two with RAID 1. Or you can set up three drives with RAID 5, and one drive as JBOD. CalDigit’s menu bar-based software utility, appropriately called CalDigit Disk Utility, lets you easily monitor, benchmark, and configure the T4 to meet your specific storage needs. 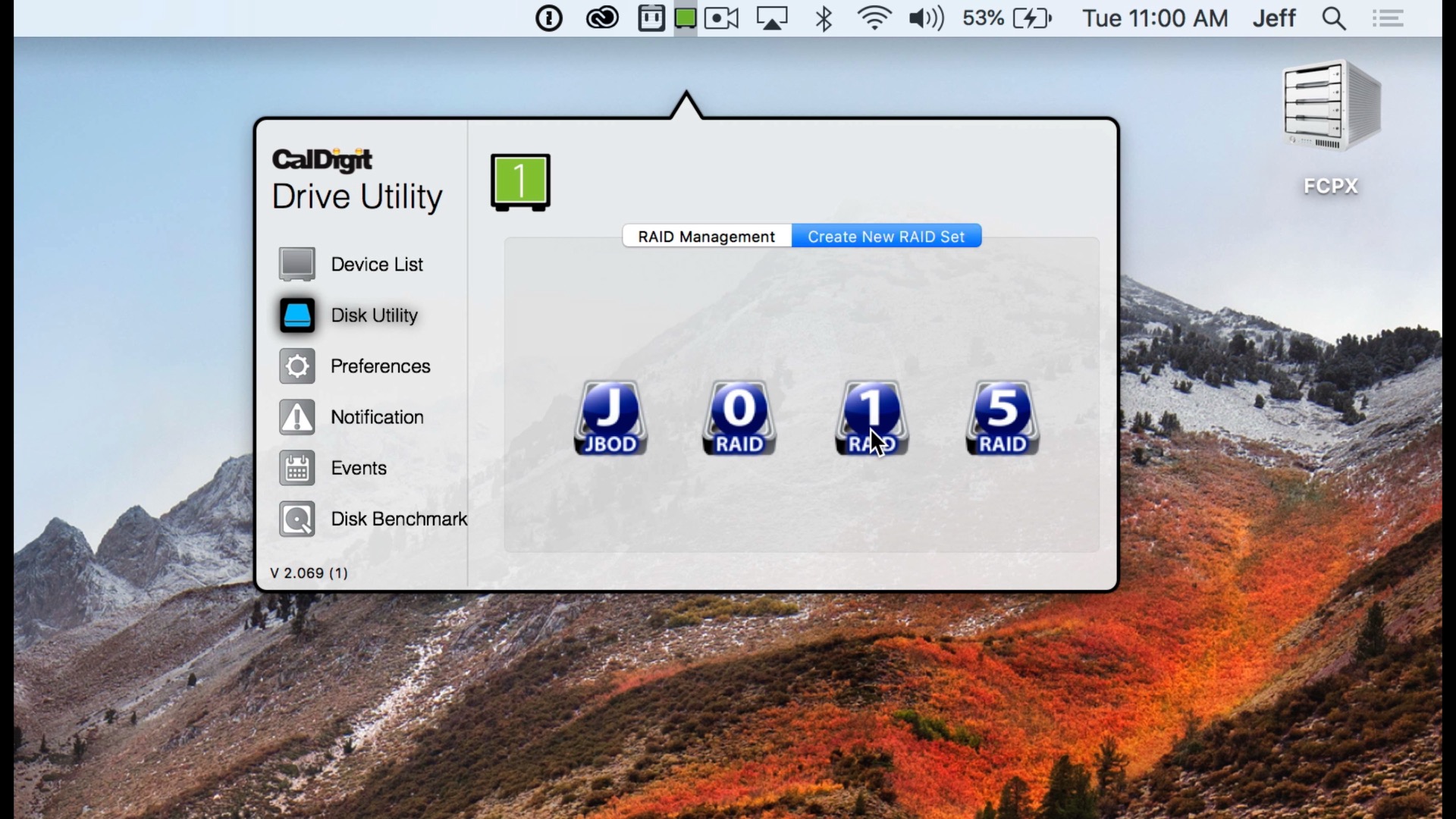 And that brings us to another interesting point. The T4 is Mac-only, as there is no CalDigit Disk Utility for Windows. The T4 isn’t a traditional software or hardware RAID per-se, as CalDigit refers to it as a Hybrid RAID — one that mixes qualities of hardware and software RAID setups. In other words, there is no manual RAID switch to configure on the hardware itself, but it does feature a proprietary SoC and kernel that offers high performance RAID capabilities that extend beyond a mere software solution.

When set up in a RAID 0 configuration, the T4 yields the highest read/write performance, especially when configured with SSDs. CalDigit says that its RAID 0 SSD config can yield speeds up to 1370 MB/s. Obviously this isn’t the type of configuration you should go for if data integrity is even of the slightest concern. 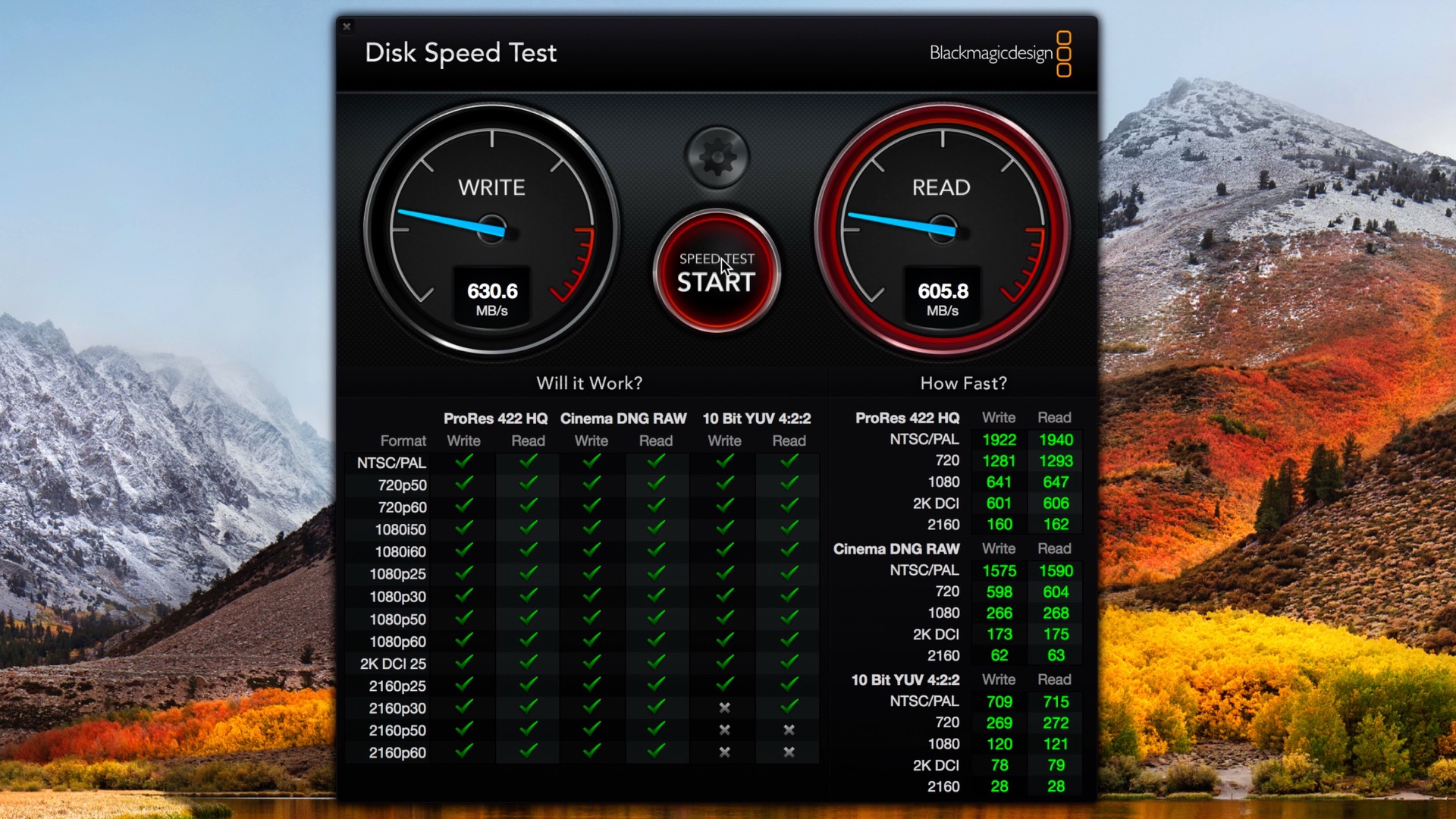 RAID 5 performance, while obviously not as fast, yields decent R/W speeds above 550 MB/s. If you’re looking for even faster performance, you’ll obviously want to opt for SSDs instead of mechanical drives. 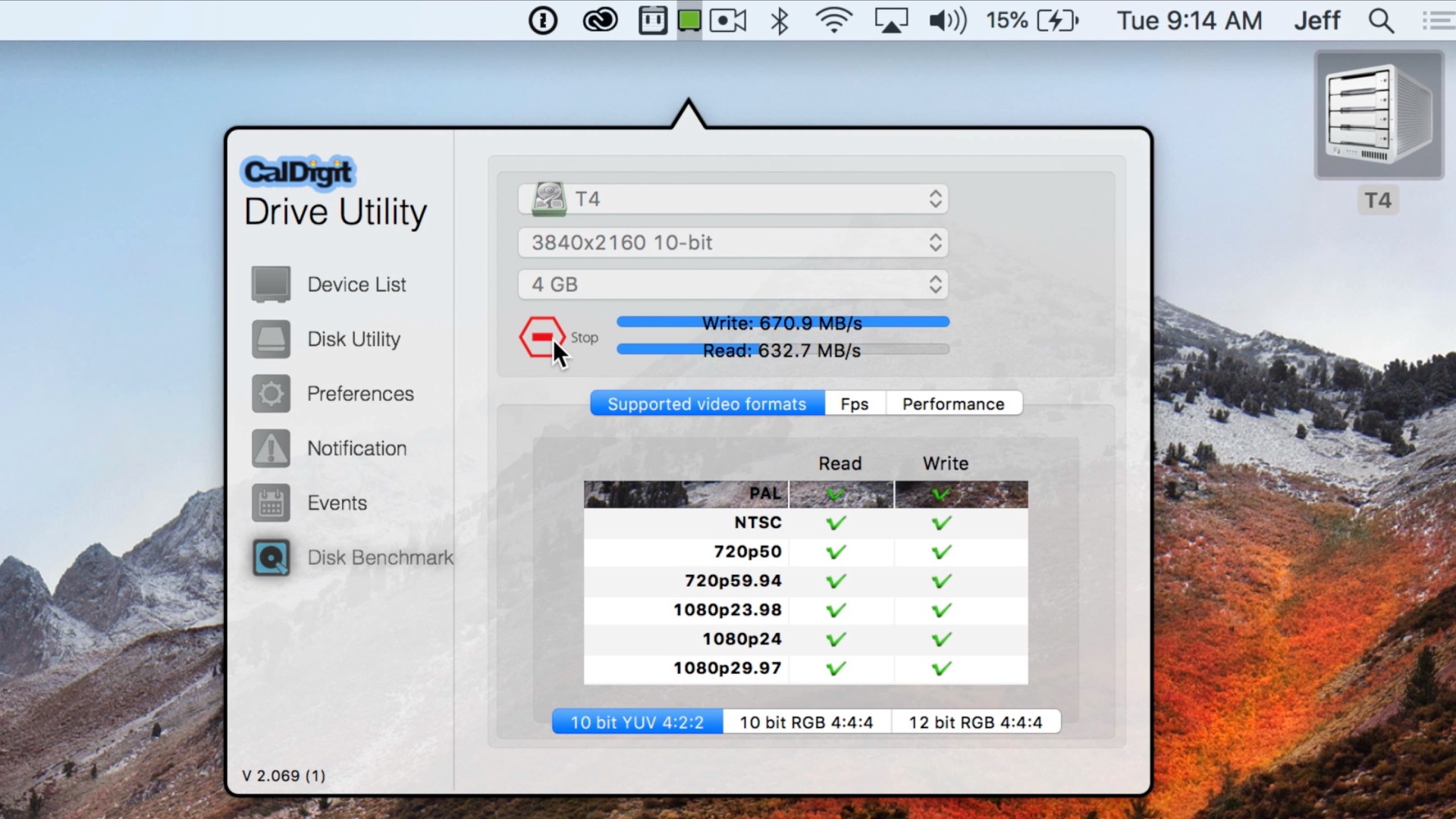 CalDigit does not endorse manually installing your own hard drives in their drive module. The company says that the drives have been carefully selected to provide the product with the optimal level of performance and reliability. It also notes that the uniformity of the components allow it to provide comprehensive customer support. 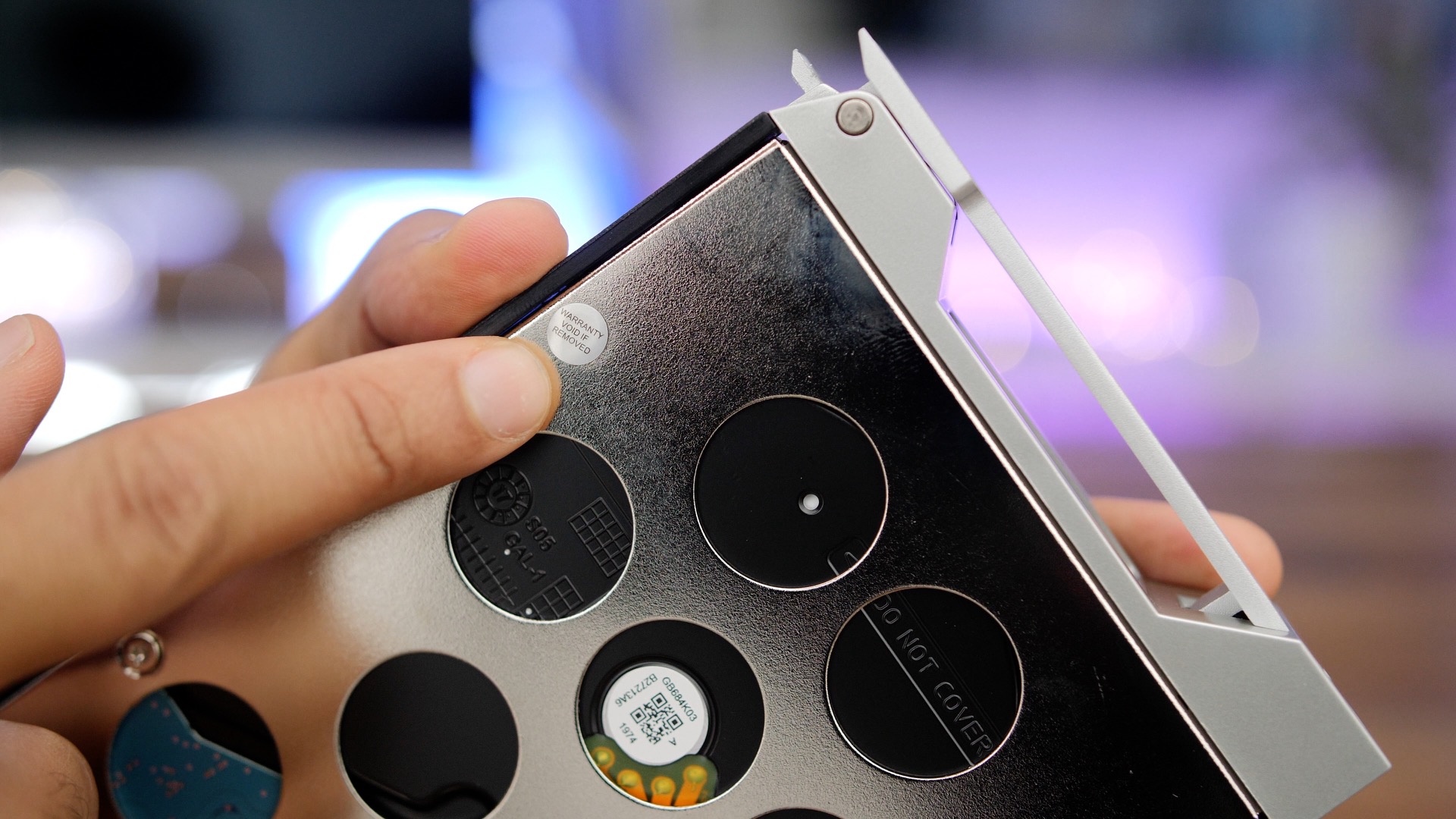 In fact, the drive modules come locked down with torx screws and a controversial “void warranty if removed” sticker. Technically speaking, it’s possible to manually install your own drives, but CalDigit’s Disk Utility app doesn’t support the most popular configuration, RAID 5, for user-installed drives. In other words, if you’re considering the CalDigit T4, you’re going to want to stick to one of the many pre-configured drive options provided.

Although this may make the T4 a non-starter for some users, especially those on a budget, CalDigit is clearly aiming the T4 at professionals who demand rock solid performance with limited end-user maintenance. A 5-year warranty is provided for the enclosure, while the drives each receive a 3-year warranty.

SSDs are nice because they’re quieter, produce less heat, and are faster, but for an enclosure like this I recommend sticking to mechanical hard drives. Having lots of storage is the main reason you’d want an external enclosure like the T4, and you can get quadruple the storage (32TB) for less than the amount of the 8TB SSD version. 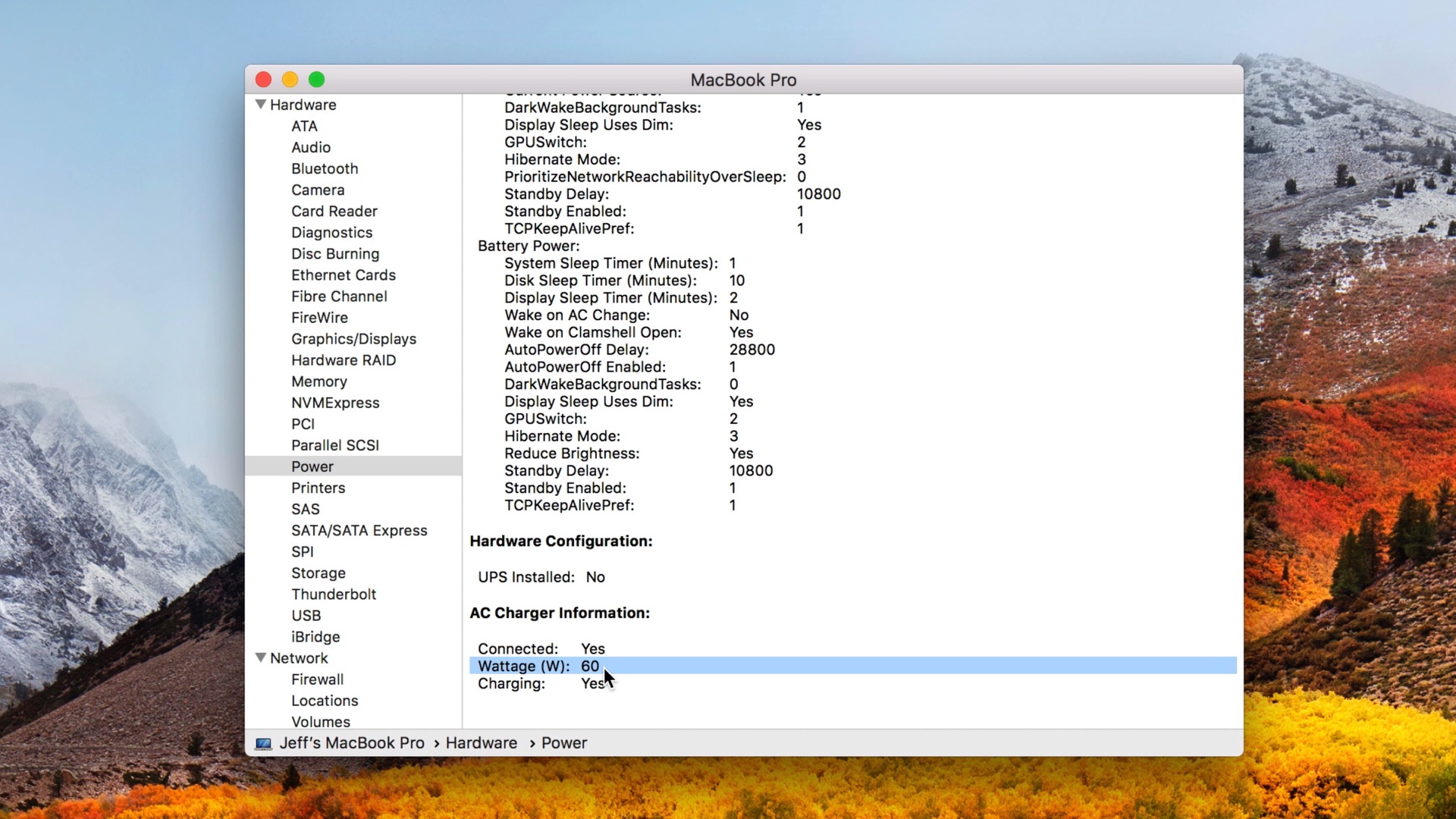 Lastly, don’t forget that the T4 can deliver full speed power to a MacBook Pro via its Thunderbolt 3 connection. With the right configuration, it can serve as a full on desktop dock interface for your MacBook Pro. 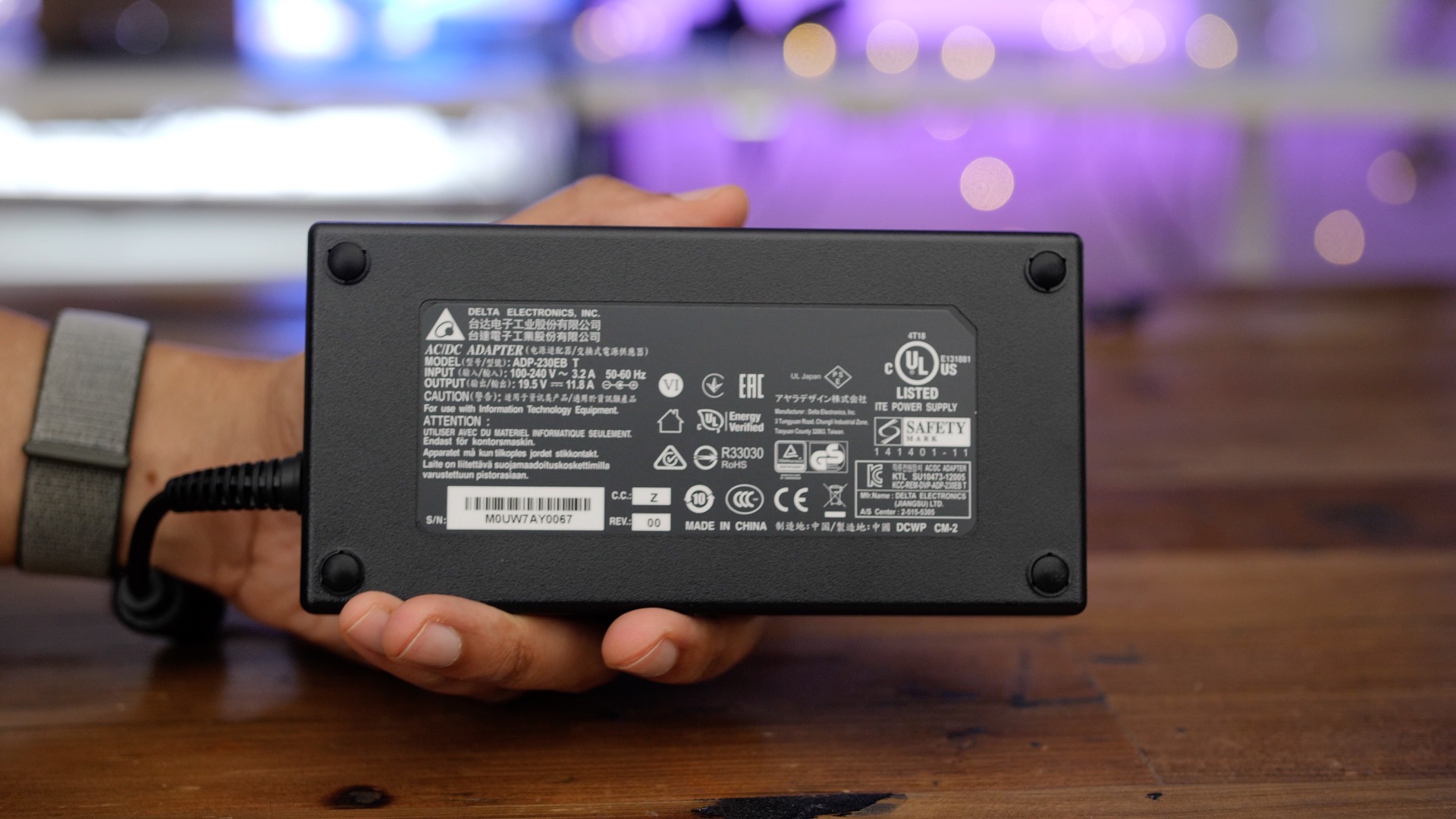 Some people will understandably be turned off by the company’s stance against adding your own drives, but CalDigit says that it enacted this policy with uniformity and reliability in mind.

The T4 is pricey, especially when you start getting into higher-specced configurations, but this is a tool that’s seemingly aimed squarely at professionals looking for an attractive, direct attached storage solution for the MacBook Pro.

If you’re a professional who demands lots of storage space in a relatively fast direct attached enclosure, then the CalDigit T4 is a something to consider. You can find multiple T4 configurations on Amazon, or directly from CalDigit.

What do you think about the T4? Sound off in the comments below with your thoughts.

CalDigit is a California-based company that specializes in makes docking and storage solutions for professionals.