Review: The BenQ ScreenBar is a really neat Mac/monitor desk light that takes up no space 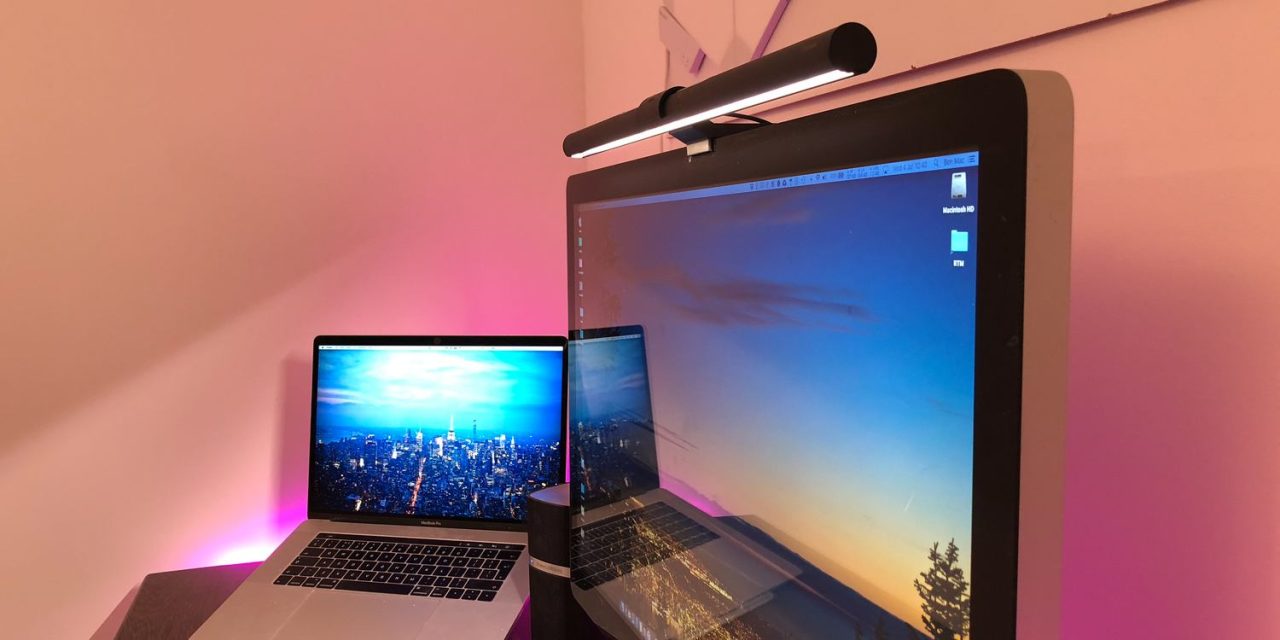 Many years ago, I used a desk striplight with a clamp. I clamped it to the back of my desk, then adjusted the angle arm so it was just above and in front of my monitor. That way, it lit the desk, didn’t cast any light onto my monitor, and effectively took up no space.

It took some time to find a suitable light, and a fair amount of messing around with clamp positions and angles until I had what I wanted. Now BenQ has created a product that achieves the same result in a really neat fashion: the ScreenBar …

The light is a slim cylinder which comes with a clamp to clip onto the top of most monitors. It has a clever, simple counterweight system which automatically adjusts to any monitor whose top measures anywhere from 0.4-inches to 1.2-inches thick. It fit comfortably and securely to my 27-inch Apple Thunderbolt Display.

The light is a black aluminum tube 18 inches wide, with a diameter of around 3/4-inch. It snap-fits into the grey plastic clamp that sits mostly behind the top of the monitor, with the holder itself overhanging the front of the monitor by around half an inch. 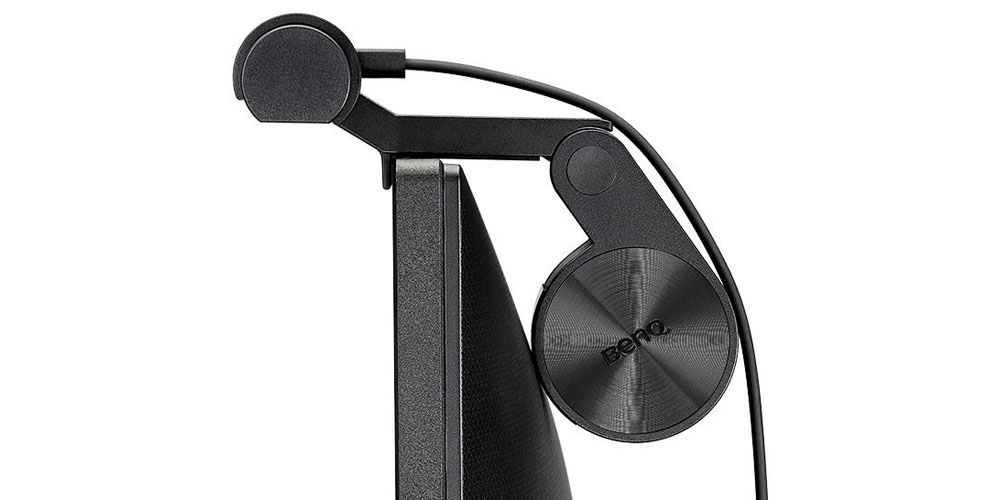 There are four touch-sensitive buttons on top of a flattened section of the light, which I talk about in Controls, below.

There’s a supplied microUSB cable to power it from any USB-A socket. My monitor ones are all in use, so I used a simple plug adapter.

You can rotate the light in the holder to adjust the angle. You want to position it so that it’s tilted out enough to avoid throwing any light onto the screen, and in enough that the edge of the light isn’t in your line of sight. I found this easy to do. (The photo above is taken deliberately low, to show the light.)

Once installed, it casts a decent amount of light onto the desk, while avoiding reflections on the screen. Setup only took a couple of minutes. 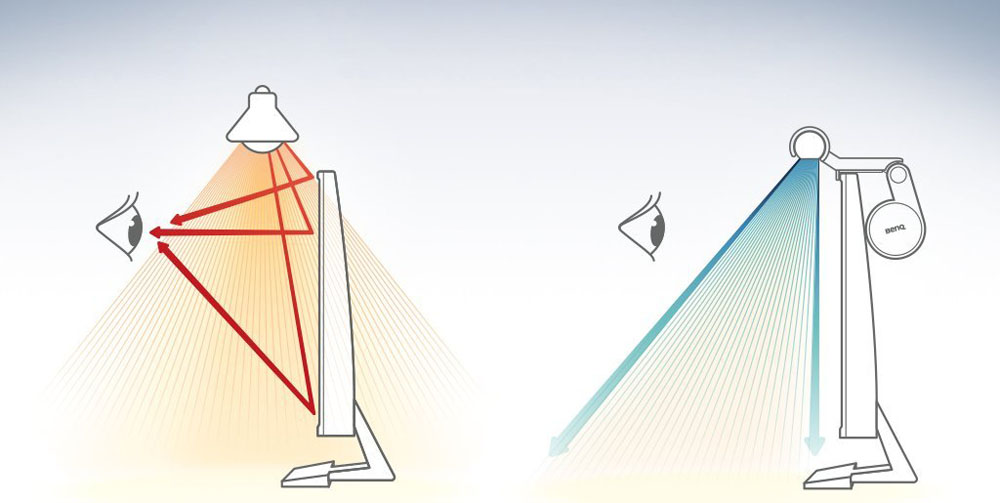 One issue with the clamp is that it covers the top half of the webcam on the ATD. I had to position it a little right of centre, which slightly triggers my OCD alarm, but not too loudly. 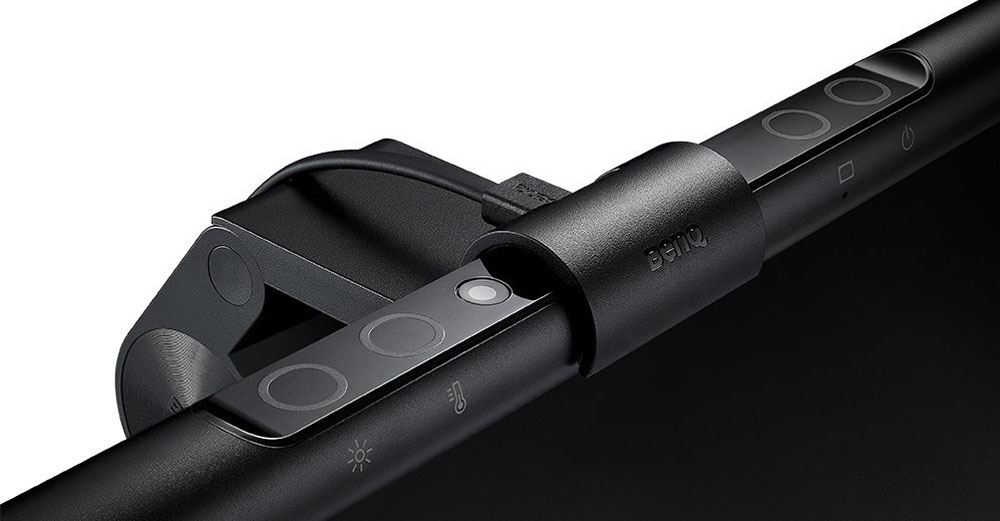 The light has four touch-sensitive buttons. These are, right to left:

Touching the power button obviously switches it on and off. The auto-brightness button triggers a feature designed to maintain a consistent amount of light regardless of the ambient lighting. I’m not a great fan of this – it didn’t necessarily choose the amount of light I wanted. Non-intuitively, the button is also not a toggle: you touch to turn it on, then touch the manual brightness button to switch it off. Personally, I prefer manual control.

Color temperature cycles through a range of colors from a very warm amber to a very cold blue.

This is my favorite feature. I tend to use a warmer color in the evening, and a cooler one in the day. The way repeated touches of the button cycles through the temperatures is a little counter-intuitive: it starts at one end, goes through to the other and then – instead of starting again at the beginning – works its way back again. So setting the color temp is trial-and-error until you get the hang of it.

Maximum brightness is claimed to be 500 lux, and I believe it – it is very, very bright for such a small light. So much so that I was getting a considerable amount of glare from my white Magic Keyboard 2. I fixed this by angling the light in as far as possible (which still didn’t hit the screen) and reducing the brightness.

BenQ also claims the light is flicker-free, and again I can’t fault this claim.

In the day, it adds some useful task lighting if you’re using papers on your desk. At night, it is sufficient on its own, and the pool of light on the desk, with very little spill elsewhere, gives a very cosy feel.

We’re used to LED lights being cheap these days, so $99 seems expensive. However, I would say that it does justify the price.

You’re getting an extremely neat lighting setup that doesn’t take up any desk space. It works exactly as advertised, not throwing any light onto the screen.

The build-quality seems good. I did get a faulty one initially, where the light started switching on and off randomly after a few days, but the replacement has been solid. The light has more than enough brightness, and it’s great to be able to adjust the color temperature over such a wide range. I’ll be using it from now on.

The BenQ ScreenBar costs $99. It comes with monitor clamp and microUSB to USB-A cable.