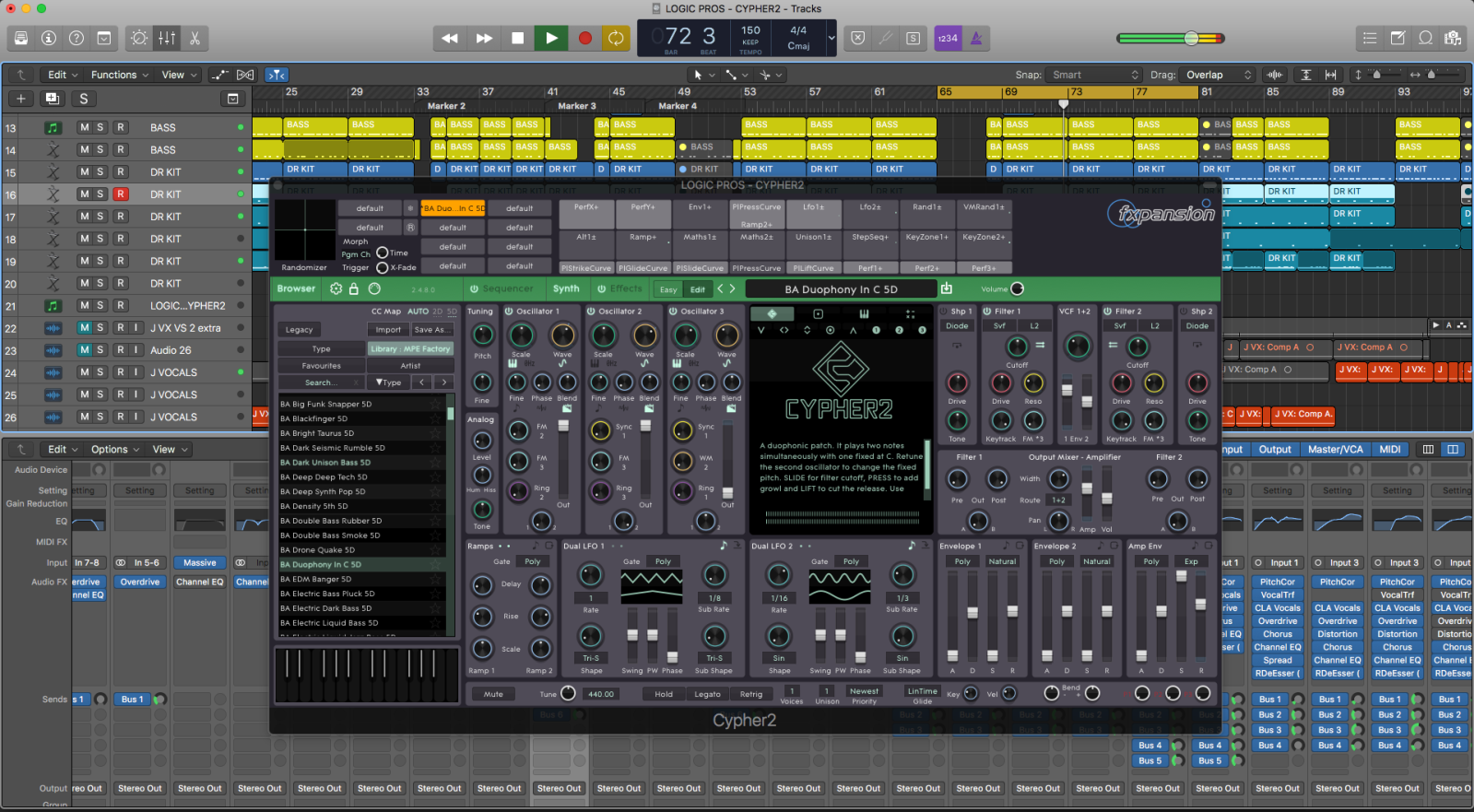 FXpansion recently released the new Cypher2 software instrument for all major DAWs. It comes packed with hundreds of new 5D touch sounds and sound design capabilities, so we couldn’t wait to give it a run for Logic Pros. The fully-featured instrument features an impressive array of effects along with a powerful oscillator section and more. But at the same price as Logic Pro X itself, is it worth it?

After getting a chance to go hands-on with the ROLI Seaboard Block controller, we have been obsessed with 5D MIDI. The emergence of MPE has created a whole new product category on both the hardware and software side of things. Gadgets like the Seaboard Block and plug-ins like Cypher2 have drastically broadened our creative horizons. In many cases, it almost forces new creative ideas out of you. The ability to naturally slide your fingers across a playing surface that still maintains the general sensibilities of a traditional keyboard in combination with the software to support it has proven itself to be more than a passing fad.

So naturally we have been on the hunt for amazing new Software instruments that support MPE and the Seaboard. One such example is FXpansion’s Cypher2. The instrument has been around for years in some capacity or other. FXpansion, however, has issued a brand new version jam-packed with 500 5D presets (plus another 800 standard presets) along with an extremely deep and expressive modulation system for multi-touch sound design.

Cypher2 features 3 analog-modeled, multi-waveform oscillators. Each of which include thru-zero FM, ring mod, a noise generator and an interesting sync feature. All three oscillators can also be used as LFOs, which is music to any sound designer’s ears and great news for beginners browsing the presets.

This is an extremely capable and fully-featured oscillator section. Cypher2 can go from your typical workhorse analog synth sounds to dreamy digital wind instruments and haunting vocal choirs, with no problems at all. You can hear it in action right here.

There are a couple standout features here as well. The adjustable sync mode on oscillator 2 and 3 is amazing. As opposed to an on/off toggle switch, it is entirely variable. So if the rotary knob is set to 100%, you get your typical “Sync sound” setup. But you’ll get varying degrees of sync (or soft sync-like tones) between 0% and 99%. While not unheard of in synth design, it is a nice touch that yielded some interesting tones and harmonics for us during testing. 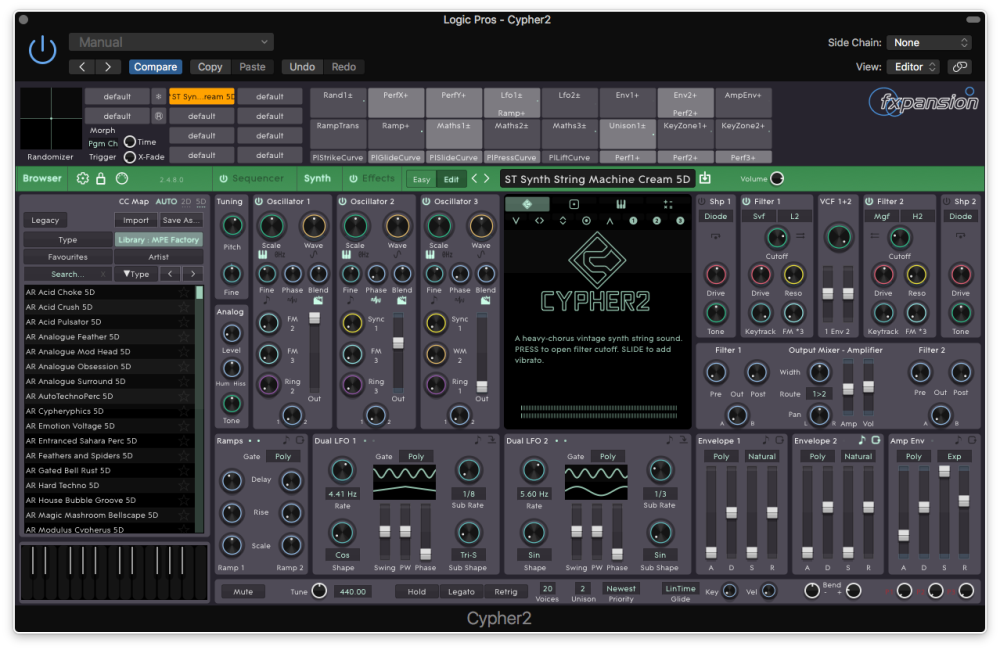 You’re essentially looking at a pair of Shaper/Multi-Mode resonant filter units with a nice balance/mixer section. While the filters themselves both have a discreet drive function, the Shaper sections are basically complete distortion/saturation modules. There are loads of different Shaper/Distortion types: Diode, OTA, OpAmp, and HalfRect with a low-pass filter setting as well as DiodK, RectK, FoldTK, FoldSK and SoftK modes with a key tracking filter control. 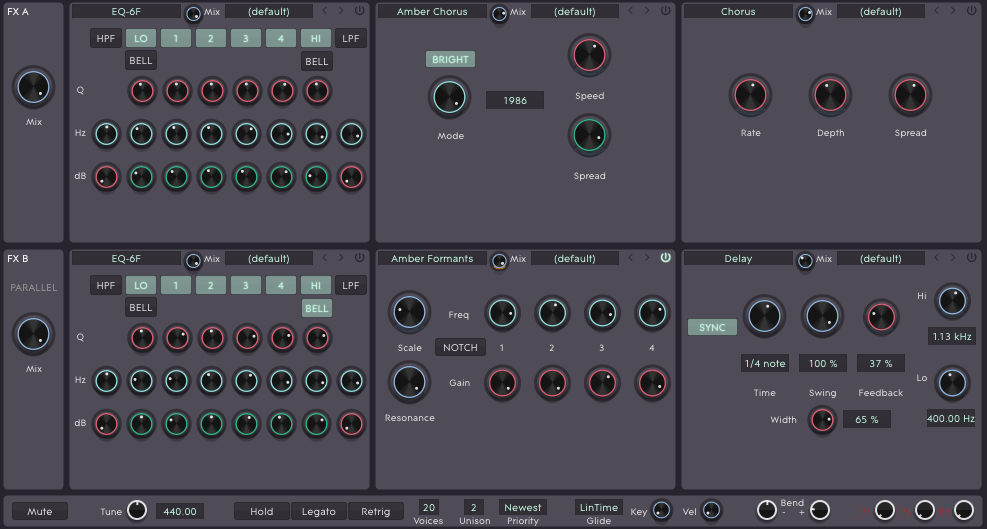 Cypher2 features an extremely powerful Effects section. It has split FX A and FX B Chains with three effects each. Each chain is set to run in series (the output of FX A feeds into FX B), but you can also opt for a parallel routing path. And just about all of the controls and all of the FX can be modulated.

There is a massive list of Effects here as well. You’ll find everything from various EQ options, to compressors, reverbs and delays, among many others. But there are a couple we would like to point out. The Amber Chorus is fantastic sounding. It uses various algorithms to mimic “classic bucket-brigade delay (BBD) chorus circuits” found in vintage instruments through the years. Secondly is the Amber Formants effect. This is essentially a 4-band formant filter that can invoke an almost vocal-like or string tone to almost any synth patch. The presets make great use of the two effects and I found them both to be real game changers when it comes to creating interesting 5D sounds. 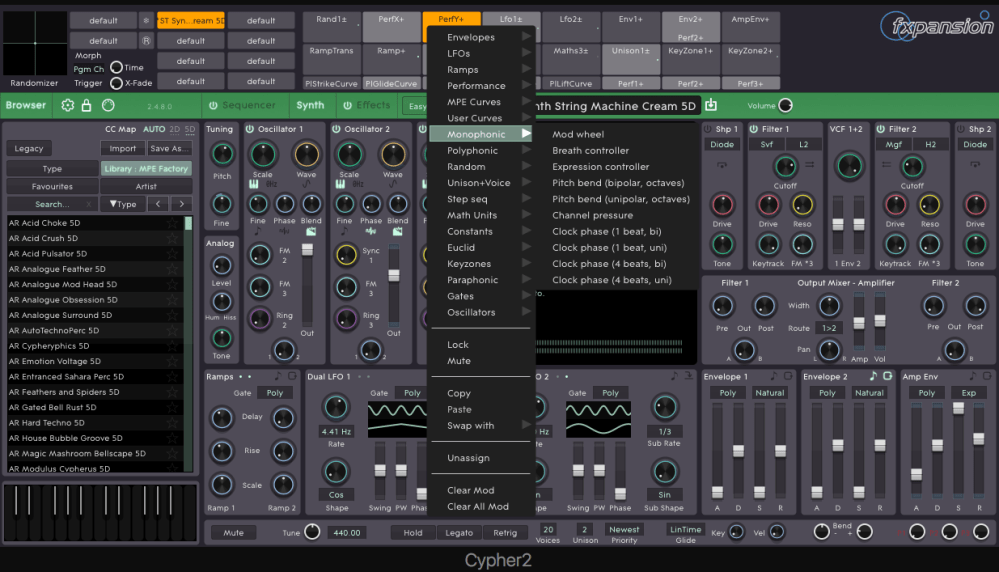 Cypher2 features an extremely deep modulation system. It is both advanced and quite intuitive at the same time. I tend to be picky about the way plug-in synth makers implement modulation routing, and I think FXpansion has done a great job here. As opposed to one of those modulation matrix style editors that’s off in another window from the main synth editor, you can do just about all of routing from right on the main page.

There are 16 TransMod slots along the top of the UI. Each of them can modulate just about all parameters on the synthesizer and can be optionally multiplied or scaled using an additional source. There are also an additional 8 hard wired Mod slots on top of that.

However, you can basically multiply all of that by 8. Within the TransMod section you can have up to 8 Quick-preset slots that can carry different settings for everything mentioned above. Meaning you can save up to 8 variations on a single patch’s modulation routing state and morph between them at will. Create a patch you love, copy and paste its modulation settings down to a new slot with some alterations and maybe nudge that randomization X/Y matrix. The sound possibilities are endless here whether you’re a pro or not.

Another nice touch here is the Parameter context menu (right-click on parameter). You can also right click on a parameter and choose a TransMod from the menu. Great for its immediacy, this can also be helpful and a more direct solution for some new sound designers. Find the control you want to add some movement to, then select what you want to do that with from the pop-up menu. This might very well be a more intuitive approach for those who are a little less familiar with synth routing.

You have to click and drag on the light grey pop-up overlay that surrounds the particular knob in question to adjust the modulation depth no matter how you choose to do it. While you can still easily adjust the knob itself by clicking and dragging as usual, I found this method to be slightly hard to get used at first. Sometimes I was grabbing the knob as opposed to the grey overlay by accident. But I got used to it within about a couple hours of tinkering. 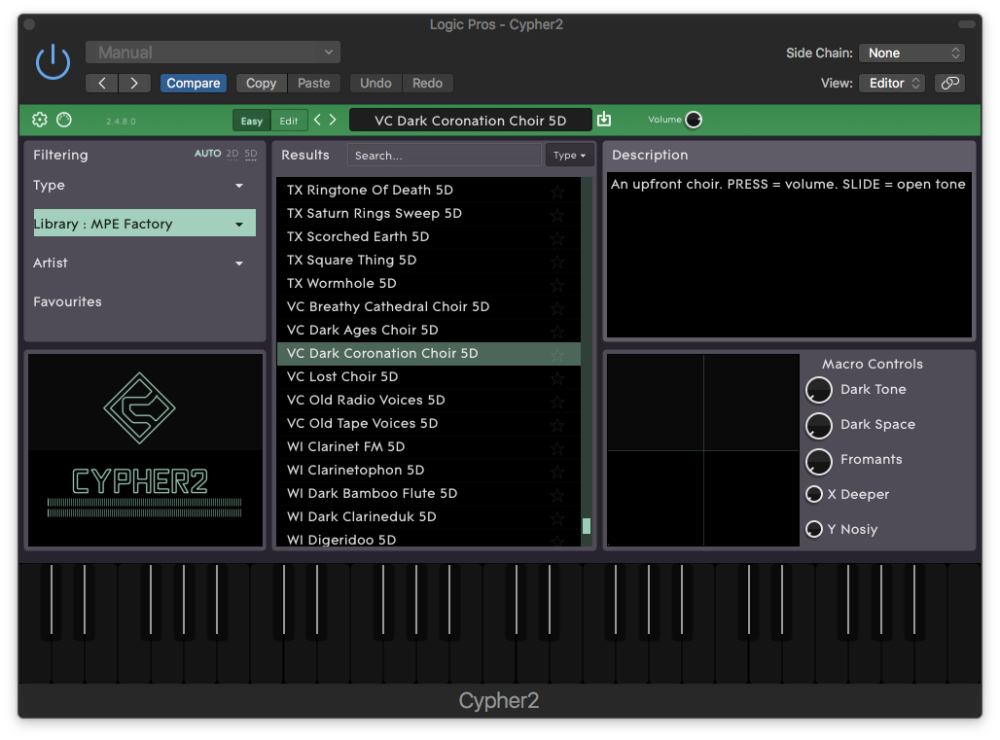 Expansion has included an excellent Easy Mode page in Cypher2 for beginners. However, it is also great for those just looking to rip through some sounds quickly. While nice for auditioning the presets available, you also get some nice macro controls to customize the sound in an extremely simple and straight forward fashion. Each patch has up to 5 contextual controls that will alter the sound to some degree ranging from FX settings to modulation depths/rates and more. For more advanced users, those controls are the P1, P2, P3 and Base X/Base Y from the Euclid processor that are built-in to that particular preset.

You’ll also find some nice alternate color themes in there as well.

Should You Buy It?

I went in to this one with fair level of skepticism. There was a marketing tie-in with ROLI and it seemed as though they wanted $200 for a bundle of presets for an old software instrument. As fantastic as the new presets are, and they are, that is very much not the case.

Cypher 2 is easily our new go-to 5D software instrument on the Mac. With its incredibly advanced modulation system, refreshingly unique on-board FX and brilliant presets, it’s almost impossible not to recommend this one. Even if you’re not as interested in such a deep modulation setup, the Easy preset page provides an amazing resource for easily customizable sounds. And on the other hand, this is clearly a very complex and nuanced synthesizer professionals can sink their teeth in to. It’s certainly not cheap, but if you’re looking to invest in some serious software instruments, Cypher2 is worth it.

Cypher2 is available now for $199. You’ll see a free demo available there as well if you want to give it a spin first.

The Logic Pros are: Justin Kahn and Jordan Kahn.

Want more Logic Pros? Check out the archives here and stay tuned for a new installments.