iPad Pro Diary: I can’t put this thing down, but we really need ‘padOS’ 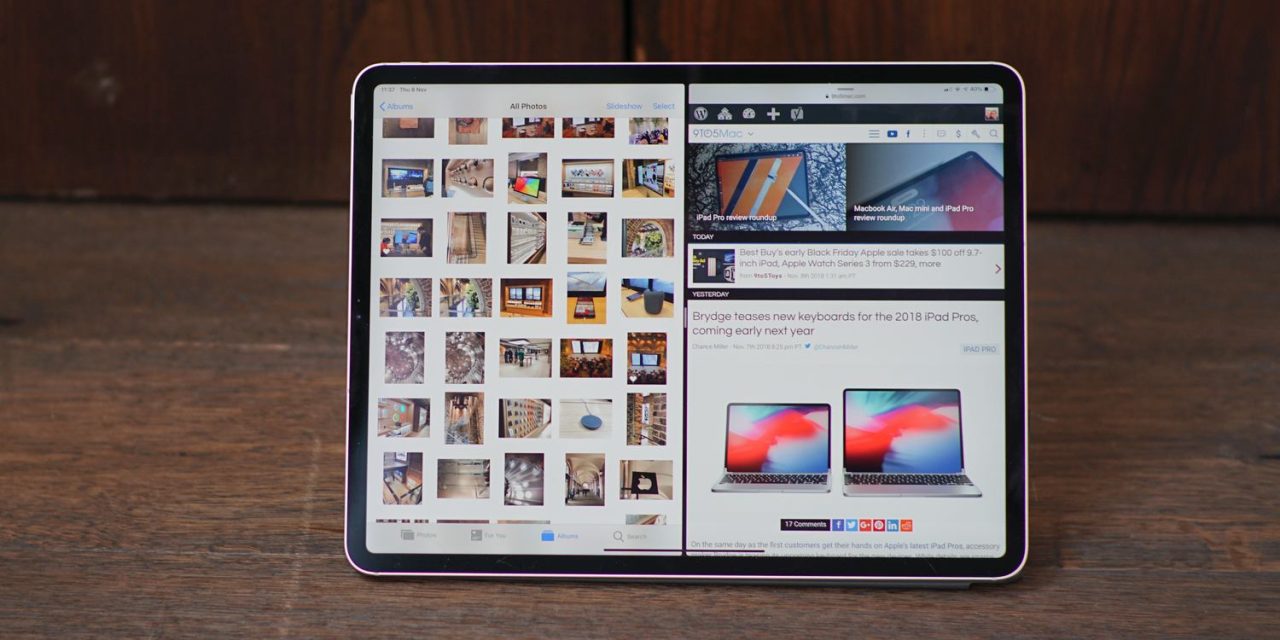 Having given my first impressions yesterday of the new 12.9-inch iPad Pro, I thought it would be at least a couple of days before I had anything more to say, but it turns out that’s not the case. Consider this partly a diary, and partly a call to arms for an iPad-specific version of iOS: padOS.

I have a Wednesday evening ritual that involves working on a creative writing project for a couple of hours in a coffee shop, then heading to a nearby pub with friends. I usually cycle there, but this evening didn’t want to stop playing with the iPad, so took the tube instead. Having managed to secure a seat, I was That Guy – the one steadfastly avoiding looking up in case I spotted a disabled grandmother who needed my seat …

I was supposed to be working on a baby screenplay – a fledgling idea for a short film – but instead used the two-hour writing time to play with the iPad and write this piece. The two activities meshed nicely, a real-life task proving an excellent way to fully experience the new device.

I waxed lyrical over the design last time, and I don’t think my enjoyment of the design is going to wear off anytime soon. One thing that struck me was the perfection of the rounded corners in the display. They are sufficiently prominent to look attractive, but not so large that you feel like you’re losing valuable screen real estate.

On the iPhone X/XS, they do noticeably eat into the display area. Not in a problematic way, but the denser UIs of some iPad apps mean that so large a curve could start to get uncomfortably close to on-screen elements. It would also, I think, make the iPad look a bit toy-like. Here, the balance seems perfect.

Face ID has so far worked reliably in both portrait and landscape. One small touch I like is that you get a little arrow pointing to the camera. It can be easy to accidentally cover the camera with a thumb, and it could be on any one of the four sides depending on how you have the iPad oriented, so it’s really handy to have a simple visual cue. If you do cover the camera, it tells you and animates the arrow pointing to it. 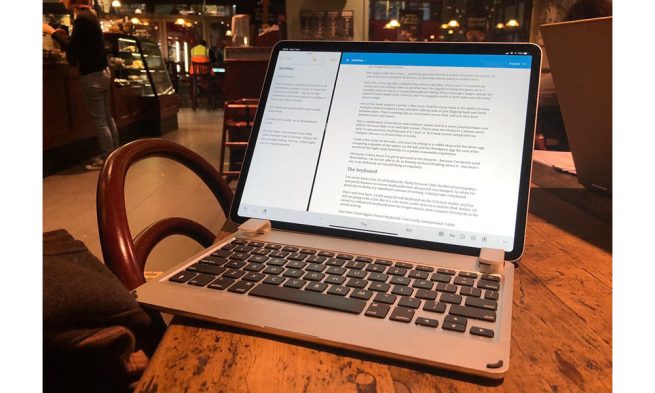 I’ve never been a fan of soft keyboards. Partly because I like the feel of moving keys, and partly because on-screen keyboards have always felt too cramped. So when I’m planning on doing any significant amount of writing, I always take a keyboard.

That’s still true here. I’m never going to be a massive fan of soft keyboards – at least, not until convincing haptics arrive. But this one is a lot more usable than on a smaller iPad. Before, I’d switch to a hardware keyboard even for longer emails; now, I suspect I’ll only do so for actual writing.

But last time I tried Apple’s Smart Keyboard, I was really unimpressed. I will try the new one just in case it’s improved dramatically. Right now I’m using the Brydge keyboard for the 10.5-inch iPad – though detached, as the tabs would cover the screen. Brydge has teased its upcoming keyboards for the new iPads, and I look forward to trying them. In the meantime, working with the iPad propped up by the Folio Cover and the keyboard detached works fine.

The ‘not a computer’ thing

The early reviews made much of the iPad Pro still not really being a computer. Apple totally brought that on itself by so vocally declaring that it is one.

Now, I get where Apple is coming from here. For your average non-tech person, a computer is a device where they do simple things – like web-browsing, email and video viewing – and they do one thing at a time. For those people, the iPad plus Smart Keyboard absolutely is a computer. And, actually, a really good one: beautifully easy to use, delightfully portable, totally reliable, genuine all-day battery-life. I often recommend an iPad rather than a Mac to non-techy friends, and I will do so even more often now.

But Apple made that claim … and then gave the iPad to a bunch of techies to review. Of course it’s not a computer to techies, so that was always going to end in tears.

But, it is a very capable computer-lite, even to the likes of you and I. I wouldn’t be overly keen on editing video on an iPad, but I’m happily writing this piece on it (well, mostly, but I’ll get back to that in a moment). I wouldn’t want to use it as my primary photo-editing device (though I might change my mind if I were adept with a Pencil), but I’ve happily used it to both take and edit some casual snaps.

One of the main reasons I prefer a Mac to an iPad for many tasks is the ability to have multiple windows open at once, whether side-by-side or just flipping back and forth between them. That is nothing like as convenient on an iPad, and you also have limited screen real-estate on smaller iPads.

But a combination of hardware and software means that it is more practical than ever before. We have Slide Over and Split Screen. These were two features I almost never used on any previous iPad because a 9.7-inch or 10.5-inch screen simply felt too cramped. But on a 12.9-inch iPad, it works.

I took a few notes on the tube, and now I’m sitting in a coffee shop with the Notes app occupying a quarter of the screen on the left and the WordPress app the rest of the screen on the right. And, honestly, it’s a pretty reasonable experience. It feels tight, but not claustrophobic.

The case for padOS

I think Apple is absolutely right to argue against converged devices. A Mac is one thing, an iPad another – even if Apple does now insist that they are both computers.

You’ve only to look at the Microsoft Surface to see that, superficially appealing as an all-in-one device is, it’s too heavily compromised in practice. The Surface is a fiddly computer and a massively heavy tablet.

But while the iPad Pro isn’t trying to be a Mac, it is a grown-up device and it needs a grown-up operating system. Not macOS, but rather a tailored version of iOS, designed to take advantage of the additional capabilities of the iPad. What some people have termed padOS.

I mean, just look at that Home screen, above. How ridiculous does that app spacing look on a screen the same size as a MacBook Air?

I don’t think it would require a massive overhaul to make an iPad-worthy version of iOS. Here’s what I’d consider the minimum acceptable spec for padOS – if you gave me these things, I’d be pretty happy:

For example, writing this piece on the iPad worked well enough, but I hit three issues.

First, selecting text in iOS is still a pretty horrible experience. Yes, the trackpad function in the soft keyboard helps a bit. Using an external keyboard helps more. But compared to a trackpad on a Mac, it’s like something out of the Stone Age.

Second, Slide Over and Split View get the job done, but they are ridiculously clunky compared to just opening a new window and positioning it where you want it.

Third, there’s a bug in the iOS WordPress app where it mis-formats text when you cut and paste it. That’s obviously a problem with that particular app, rather than iPad or iOS per se, but a bug like that would never in a million years make it through testing in a desktop environment. The assumption by many developers is that people only do very basic things on an iPad – in this case, writing but not heavier editing. So to my wishlist above, I have to add:

Adobe is a good example of the right attitude to this, I think.

The latest iPad Pro is a brilliant iteration of a fantastic device – but it really needs software to match the capabilities of the hardware.

Do you agree that it’s time for padOS? Share your thoughts in the comments, and if you do agree, let us know what would be on your padOS wishlist.

More of our thoughts on the latest iPads: