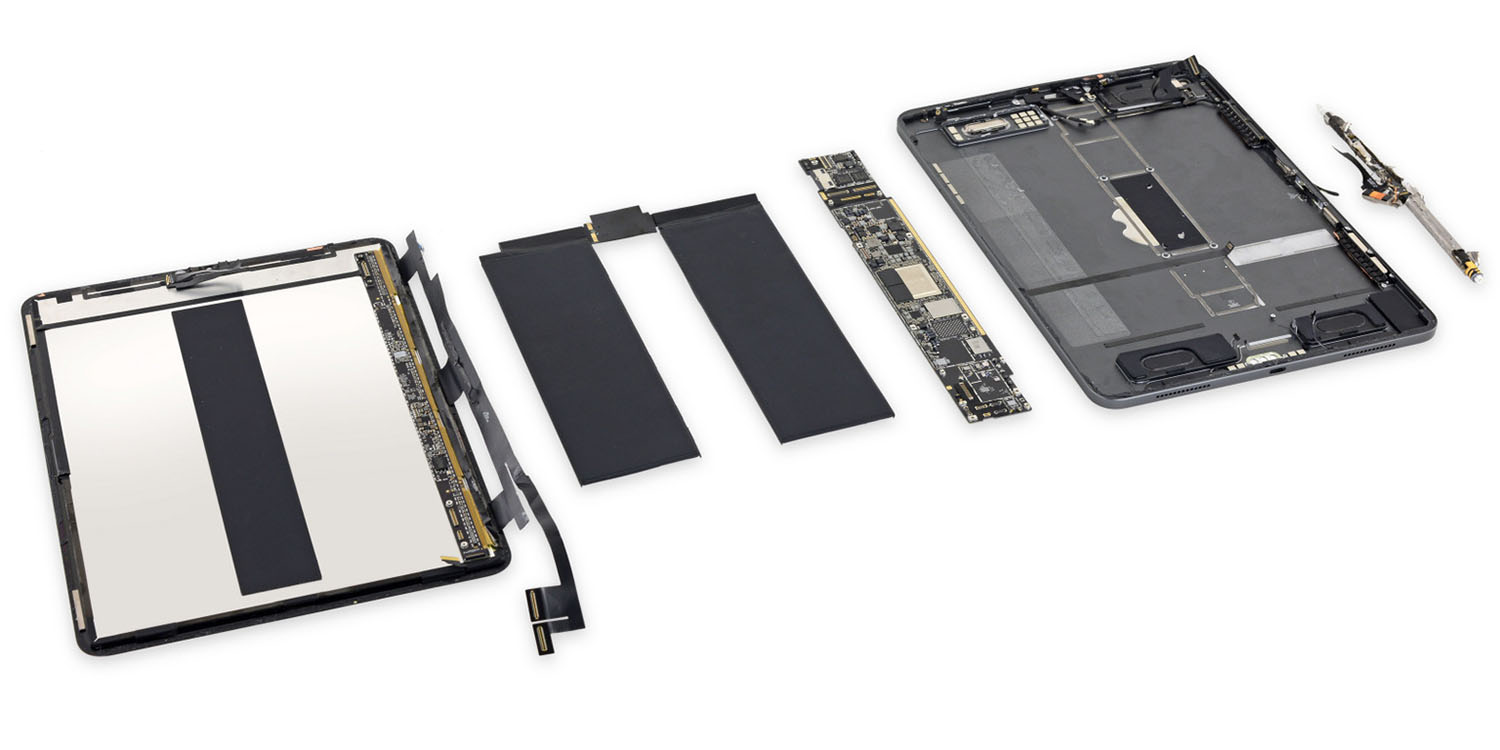 One thing you can be sure of with any new Apple device: it won’t be long before iFixit takes it apart to show us what’s inside, and assess how repairable it is. The company has today published its 11-inch iPad Pro teardown.

The new iPad Pro 11” sports narrower bezels, curvy LCD corners, and cutting edge silicon. This is apparently the iPad Apple dreamed about building from the very beginning, but what we dream about is a device that is easy to repair. Will this iPad fulfill both dreams, or will ours be left in the pipe? There’s only one way to tell—with a teardown …

There aren’t too many surprises, and the difficulty of getting into the iPad without breaking anything was certainly to be expected.

We loved the experience of cutting through all the glue to open our first iPad, and it has never gotten old. This statement is brought to you by the Coalition of Sarcastic Tinkerers and National Opposite Day.

It helps to be practiced at this, but these extra-thin bezels make it even a bit more harrowing than usual. Heat, carve, hold your breath, and hope nothing breaks.

It turns out the case is a little thicker around the Pencil charging area—we started prying there and quickly regretted it.

On the plus side, the display’s ribbon cables are a safe distance from the bezels—but they’re also spread out in a way that makes display removal really awkward.

Both the logic board cover and the battery were very firmly glued down, which made accessing each a real challenge. iFixit was particularly dismayed by the amount of glue holding down the battery.

A huge patch of supergoop runs all the way down the left side. Sigh. Time to break out the pry tools.

We were left speechless. Why would Apple do this? We could only hypothesize that the adhesive is there for “rigidity reinforcement”.

Apple highlighted the four speakers, iFixit finding that each comprises a woofer and tweeter for eight drivers in all.

One thing that immediately stands out is the iPad’s quartet of speakers. Four woofers and four tweeters, for a total of eight speakers, make for a Netflix powerhouse—because even professionals need a break sometimes.

The company says that the Face ID module ‘is the same basic hardware we’ve seen since iPhone X—IR dot projector, selfie camera, and IR camera—but in a slightly modified form factor.’ iFixit doesn’t, however, go into any more detail than that. It would be particularly good to know whether the ability to recognize faces in both landscape and portrait orientations required any extra hardware, or just software changes. If the latter, that potentially means Apple could upgrade the feature in existing iPhones.

iFixit also said that this iPad has more magnets than ever seen in any previous model.

If we had a nickel for every magnet in here, we could melt them all down and make a giant novelty nickel.

The company also did a teardown on the new Apple Pencil. As with the original model, there is no non-destructive way in, so the company had to use an ultrasonic blade. Welded steel layers inside meant iFixit was only able to reveal a few components.

However, the company did raise one intriguing possibility.

A large black ribbon cable unfurls from around the Pencil body, revealing what looks like a capacitive grid!

This is likely used to register tap inputs, but this grid ought to help the Pencil know where—not just when—you tap. Could more complex gestures be on the way?

As far as repairability of the new iPad goes, iFixit highlights a couple of pieces of good news alongside the bad, but overall gives it just 3/10.

The USB-C port is modular and can be independently replaced.

The lack of a physical home button eliminates a common failure point and may simplify repairs.

The battery is secured with both easier-to-remove stretch-release tabs and conventional, non-removable adhesive.

The LCD and front panel glass are fused together—simplifying the opening procedure, but increasing the cost of repair.

Gobs of adhesive hold most everything in place, making all repairs more difficult.

Check out the full teardown here and our own impressions of the new device below.