IDC: Apple Watch to ‘undoubtedly lead the way’ as the wearables industry grows 15% in 2019

IDC is out today with its forecast for the wearables industry in 2019, predicting continued double-digit growth. According to IDC, the worldwide wearables market will grow 15.3 percent in 2019 to 198.5 million units. Looking even farther ahead, IDC anticipates wearables shipments of 279 million units by 2023.

IDC uses a relatively broad definition when it comes to “wearables,” factoring in wireless headphones with smart assistants, watches, wrist bands, and “connected clothing.” Watches, however, are by far the largest wearables category for IDC, accounting for 44.2 percent of the entire market in 2018.

In 2019, IDC expects smartwatches to account for 45.6 percent of the wearables market and continue growing to hit 47.1 percent by 2023. Apple Watch will “undoubtedly lead the way,” the analysis firm says, despite increasing competition from Android and other manufacturers. IDC also anticipates strong earwear growth, but relatively low wristband growth.

All in all, IDC predicts that smartwatch shipments will hit 90.6 million in 2019.

Watches accounted for 44.2% of the entire wearables market in 2018 and its share is anticipated to grow throughout the forecast, reaching 47.1% in 2023. Smartwatches from Apple will undoubtedly lead the way and despite increasing competition from watches running forked versions of Android as well as Wear OS, WatchOS will account for 27.5% of all watches in 2023.

Other than smartwatches, hybrid watches and simpler kids’ watches will also continue to grow albeit at a much slower pace.

Earlier this month, IDC published its data for the fourth quarter of 2018. The firm said that Apple Watch accounted for 10.4 million shipments during the quarter. This is slightly higher than the 9.2 million Apple Watch units that Strategy Analytics said Apple shipped during the quarter. Apple itself does not disclose unit sales of its Wearables business, which includes both Apple Watch and AirPods.

Read the full release from IDC below: 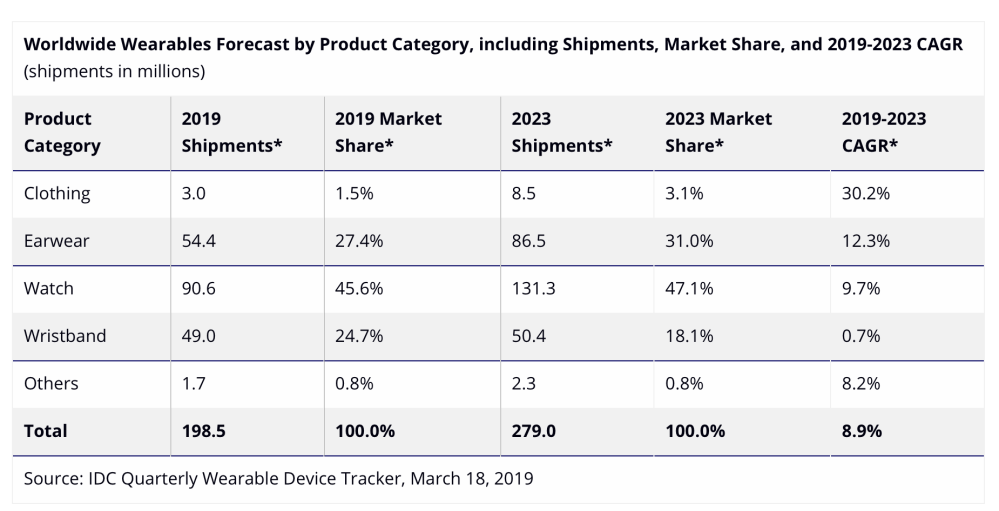 FRAMINGHAM, Mass., March 18, 2019 – The worldwide market for wearable devices, now inclusive of wireless headphones with smart assistants, is forecast to grow 15.3% over the previous year to 198.5 million units by the end of 2019, according to the International Data Corporation (IDC) Worldwide Quarterly Wearable Device Tracker. Driving that growth will be the continued proliferation of watches, ear-worn devices, and wrist bands as well as further adoption in the healthcare segment. Looking ahead, the market is expected to reach 279 million units by the end of 2023 with a compound annual growth rate (CAGR) of 8.9%.

“The rise of smart assistants on wearables, both wrist-worn and ear-worn, is a trend worth watching,” said Jitesh Ubrani, research manager for IDC’s Mobile Device Trackers. “Though still in its infancy, the integration of these assistants with wearables opens up new use cases, from allowing these devices to tie into the smart home to making the devices more proactive at urging users to live healthier or more productive lives.”

“Two major drivers for the wearables market are healthcare and enterprise adoption,” said Ramon T. Llamas, research director for IDC’s Wearables team. “Wearables stand to play an important role in digital health, constantly collecting important patient data while also giving patients the ability to self-monitor. Within the enterprise, wearables can help to accelerate companies’ digital transformation by transmitting information back and forth while allowing workers to complete their tasks faster. This is where both vendors and companies can streamline processes to achieve faster results.”

Watches accounted for 44.2% of the entire wearables market in 2018 and its share is anticipated to grow throughout the forecast, reaching 47.1% in 2023. Smartwatches from Apple will undoubtedly lead the way and despite increasing competition from watches running forked versions of Android as well as Wear OS, WatchOS will account for 27.5% of all watches in 2023. Other than smartwatches, hybrid watches and simpler kids’ watches will also continue to grow albeit at a much slower pace.

Earwear, also referred to as hearables and ear-worn devices, will be the second largest category of wearables in 2023 with 31% share. The inclusion of biometric sensors and the adoption of smart assistants will help drive this category forward throughout the forecast.

Wristbands, once the most popular form factor, will experience flat growth with a CAGR of 0.7%. Meanwhile, growth in terms of dollar value is expected to decline with a -4.1% CAGR during the same period as average selling prices drop from $51 in 2019 to $42 in 2023. The market is already dominated by Chinese brands such as Huawei and Xiaomi, and IDC expects this to continue.

Connected Clothing will be largely comprised of step-counting shoes and similar devices. To date these types of products have mainly been popular in China but that is slowly changing as brands such as Nike and Under Armour make headway in other markets. In the later years of the forecast, IDC expects to see more enterprise applications introduced as companies aim to monitor employees in hazardous situations.