The Apple Watch along with some of other Apple’s accessories such as AirPods have become some of the company’s most profitable and popular products. Apple has never revealed its wearable’s sales figures to the public, citing competitive concerns. So we have to rely on analysts to offer their best estimates. IDC is out today with a report on global wearables sales for Q4 2018.

According to the new report from IDC, Apple is leading the way in the wearables market, which it defines as “smartwatches, wrist bands, and ear-worn devices.”

Overall, the wearables market grew 31.4% during Q4 of 2018, shipping a record 59.3 million units throughout the period.

Growth in the market was driven by new wearables launching during the months leading up to the holiday season as well as new smartphone launches as many were bundled with wearables from leading brands. Shipments for the entire year of 2018 grew by 27.5% with 172.2 million wearables shipped.

As for Apple, the company remains number one in this space, as the report says it shipped 16.2 million devices in Q4 of 2018. Of the 16.2 million, 10.4 million were some variation of Apple Watch. IDC notes that the number of Apple Watches sold should continue to grow throughout future quarters as more healthcare organizations and health cautious individuals adopt the Apple Watch. This leaves roughly 5.8 million units to other Apple devices such as AirPods and Beats headphones.

In comparison, a separate report from Strategy Analytics last week noted that Apple shipped 9.2 million Apple Watch units, which is roughly 1 million units less than what IDC is reporting. Again, Apple doesn’t reveal unit sales data for the Apple Watch so we’ll never know for sure which report is correct.

This shouldn’t be surprising as Apple’s AirPods were a hot item this holiday season with many stores constantly selling out of the earbuds. The Apple Watch Series 4 was also the first generation to have a major redesign since its original debut in 2015, so it would make sense for new and existing users alike to jump on the latest model. 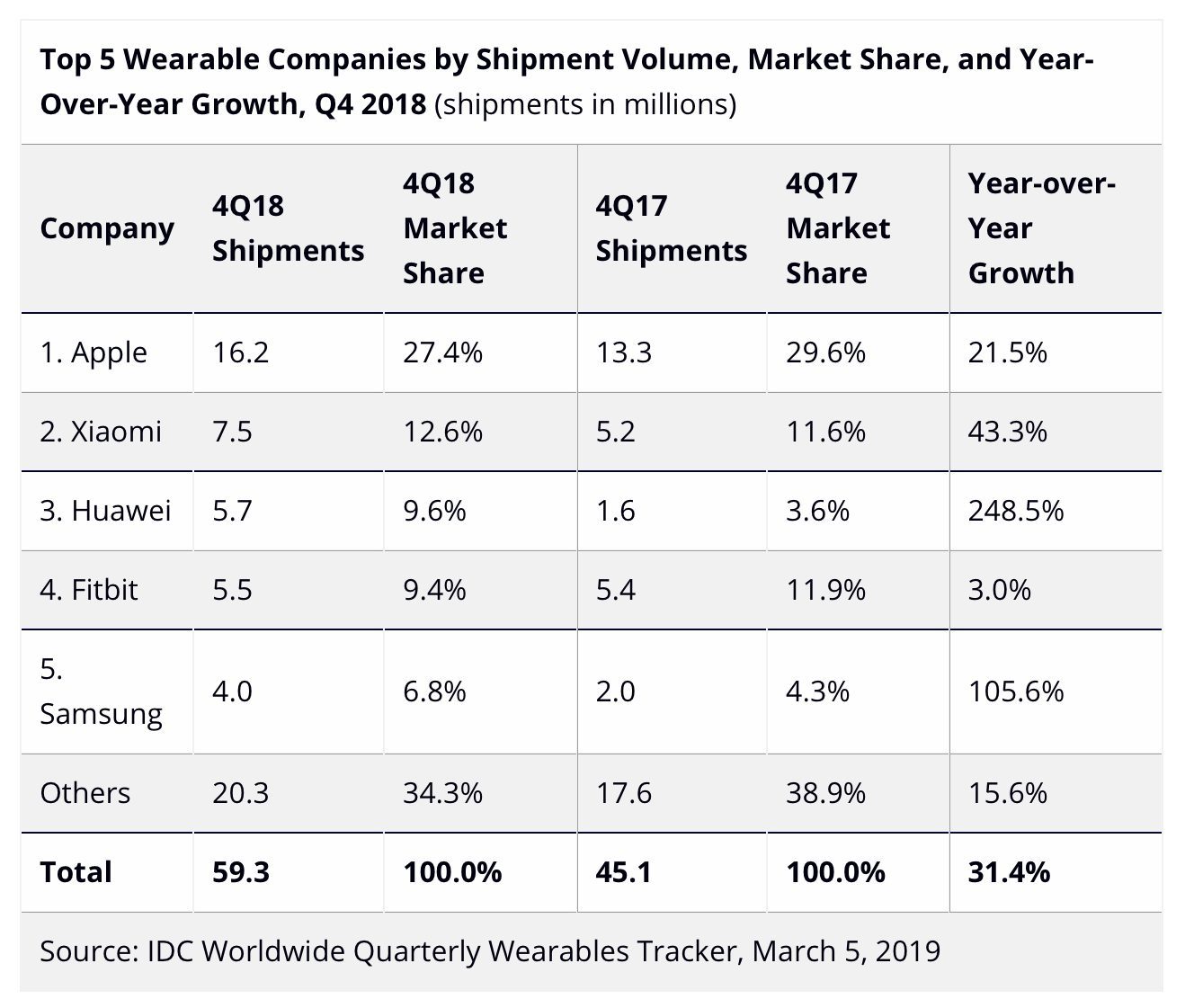 FRAMINGHAM, Mass., March 5, 2019 – The worldwide market for wearable devices grew 31.4% during the fourth quarter of 2018 (4Q18), reaching a new high of 59.3 million units according to data from the International Data Corporation (IDC) Worldwide Quarterly Wearable Device Tracker. Growth in the market was driven by new wearables launching during the months leading up to the holiday season as well as new smartphone launches as many were bundled with wearables from leading brands. Shipments for the entire year of 2018 grew by 27.5% with 172.2 million wearables shipped. Much of this growth was attributed to the growing number of ear-worn devices as they captured almost a quarter of the market during the year.

In keeping up with current trends, IDC has recently revised its taxonomy for ear-worn devices to now include wireless headphones capable of enabling smart assistants at the touch of a button or through hot-word detection. Examples of such headphones include Apple’s AirPods, Google’s Pixel Buds, Bose’s QC35II, and more.

Among the various form factors available during the quarter, smartwatches grew 55.2% compared to 4Q17 and accounted for 34.3% of the overall market during the quarter. Meanwhile, wrist bands accounted for 30% of the market as recent launches from Xiaomi, Huawei, and Fitbit continued to drive the category forward. Ear-worn devices grew 66.4% and captured 21.9% of the market.

“The market for ear-worn wearables has grown substantially this past year and we expect this to continue in the years to come,” said Jitesh Ubrani senior research analyst for IDC Mobile Device Trackers. “It is the next battleground for companies as these types of headphones become a necessity for many given the exclusion of headphone jacks from modern devices. Add to that the rise of smart assistants and in-ear biometrics and companies have the perfect formula to sell consumers on a device that’s complimentary to the device ecosystem that lives on their wrist and in their pocket.”

“Smartwatches, meanwhile, grew 54.3% and accounted for 29.8% of all wearable device shipments in 2018,” said Ramon T. Llamas, research director for IDC’s Wearables. “Apple accounted for nearly half the market and followed by a long list of companies that posted double- and triple-digit growth. What resulted from this was a growing list of devices available at multiple price-points to meet the needs of a diverse market.”

Apple maintained the number 1 position with 16.2 million devices shipped in 4Q18, 10.4 million of which were Apple Watches. The Series 4 has been off to a very strong start and IDC anticipates this to continue as more healthcare organizations and consumers adopt the latest device. The remainder of Apple’s shipments were comprised of AirPods and Beats headphones in the ear-worn category.

Xiaomi captured the second position amongst the top 5 with 12.6% share. The company’s products remain strong in its home country of China. However, recent investments in Europe and other Asian countries have paid off and helped cement Xiaomi’s name as a competitive force. Xiaomi’s Mi Band 3 alone accounted for over 30% of all wrist bands shipped during the quarter.

Huawei had a great quarter in the wearables and smartphone markets. Within smartphones, the company grew 43% during the quarter in an otherwise declining market and this translated to a staggering 248.5% growth in the wearables market since many of the Huawei and Honor phones were bundled with wearables. New product launches such as the Watch GT, FreeBuds 2 Pro, and a few others also helped the company gain traction.

Fitbit finally returned to growth during the holiday season as the new Charge 3, combined with promotional activity on other popular devices such as the Versa, helped the company to claw back some of its market share. The company’s outlook remains strong as investments in the healthcare segment continue to pay off. In the U.S., Fitbit has managed to partner with providers such as Blue Cross Blue Shield, UnitedHealthcare, and others, allowing for further proliferation of its devices and services.

Rounding out the top 5 was Samsung with 4 million units shipped during the quarter. Similar to Huawei and Xiaomi, Samsung was also able to bundle many of its wearables with smartphones. The newly launched Galaxy Watch was quite well received although older models such as the Gear S3 still managed to capture a notable share of Samsung’s overall shipments.