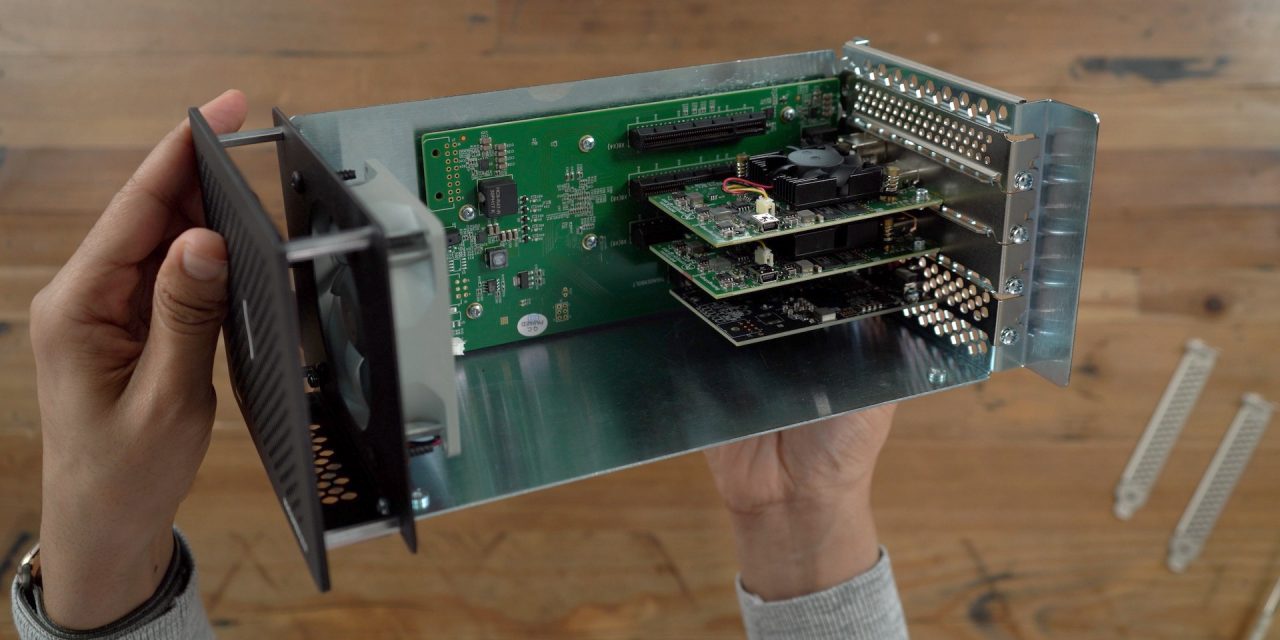 In this hands-on video walkthrough, I show you how to put together a dual 4K video capture enclosure for saving ProRes videos directly to a Mac. In order to do so, I utilize Sonnet’s Echo Express SEIII and the Blackmagic Design DeckLink Mini Recorder 4K. Watch the full video for the details behind the setup.

Streamlining my workflow with a 4K video capture enclosure

Over the past couple of years I’ve slowly incorporated new pieces into my video workflow to help streamline my shooting and post production process. One of the more useful new additions was my overhead shooting rig, allowing me to more easily acquire top-down footage of product coverage.

Recently, I decided it was time to better integrate the overhead rig with the rest of my setup and I settled on the idea of ingesting footage from both of my stationary cameras directly into macOS, completely bypassing SD Cards or other external media. Since I shoot videos in 4K, I needed something that could handle such bandwidth from two cameras, and record the footage directly to ProRes.

Video: How to build a dual 4K video capture enclosure

The perfect solution for my requirements is, unsurprisingly given their repertoire, produced by Blackmagic Design. The Blackmagic Design DeckLink Mini Recorder 4K is a PCIe capture card that features both HDMI and SDI input. Blackmagic’s Media Express software allows users to capture footage directly to ProRes for editing in Final Cut Pro X.

But how would I connect not just one, but two DeckLink 4K PCIe cards to my iMac Pro? Sonnet’s Echo Express SEIII turned out to be the ideal choice. This triple PCIe enclosure allows me to connect two DeckLink cards to my Mac and ingest 4K footage directly to macOS via a single Thunderbolt 3 cable.

Sonnet’s Echo Express SEIII is a simple, yet extremely versatile, enclosure. It’s versatile because it’s totally up to the end-user what the chassis becomes. In my case, it turned into a video capture solution. In your case, it might be a PCIe SSD, or perhaps even a 10 Gigabit Ethernet solution. Or maybe it’ll be a combination of all three? That’s the beauty of Thunderbolt 3 along with the growing list of products that feature Thunderbolt 3 connectivity. 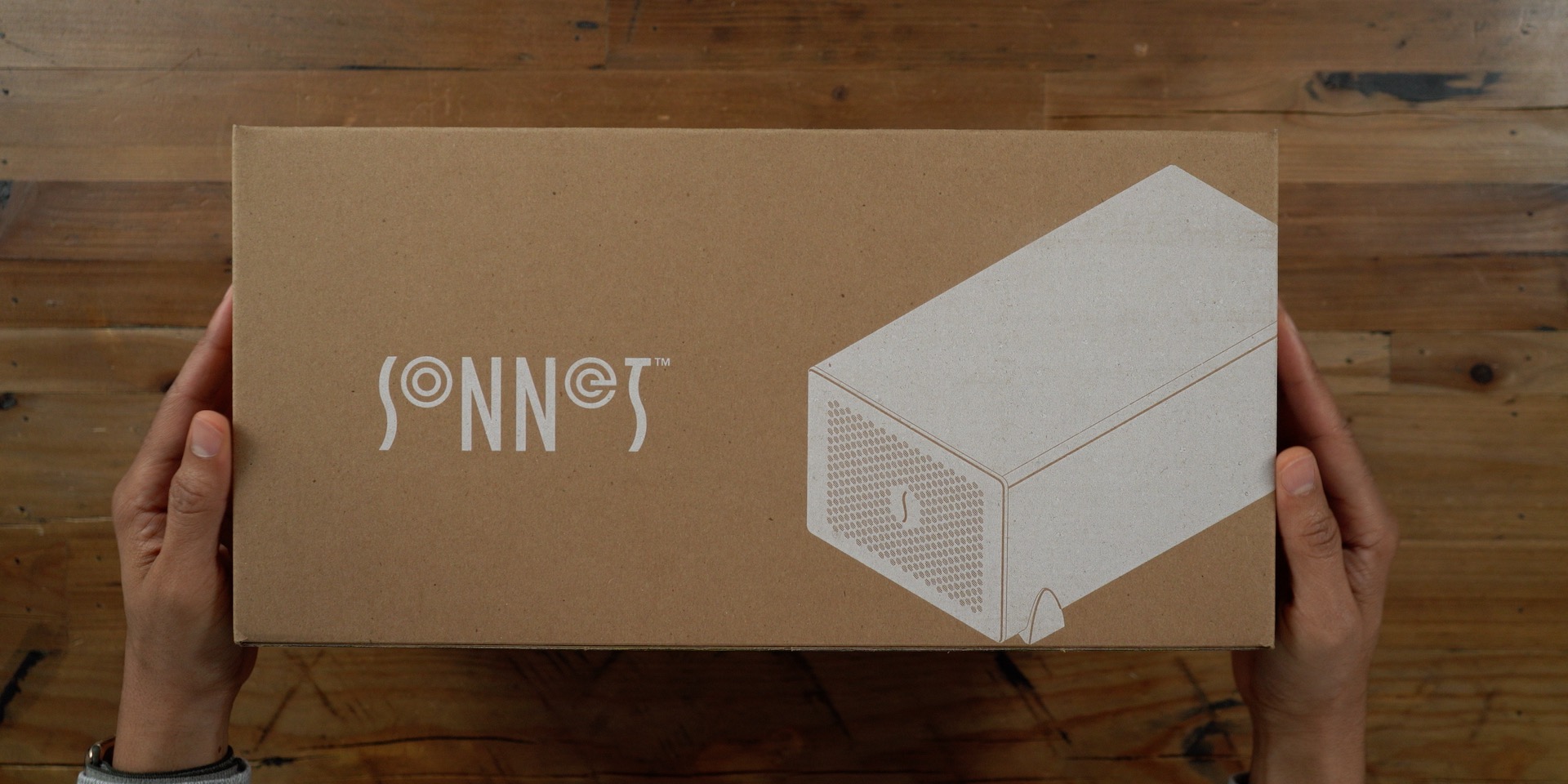 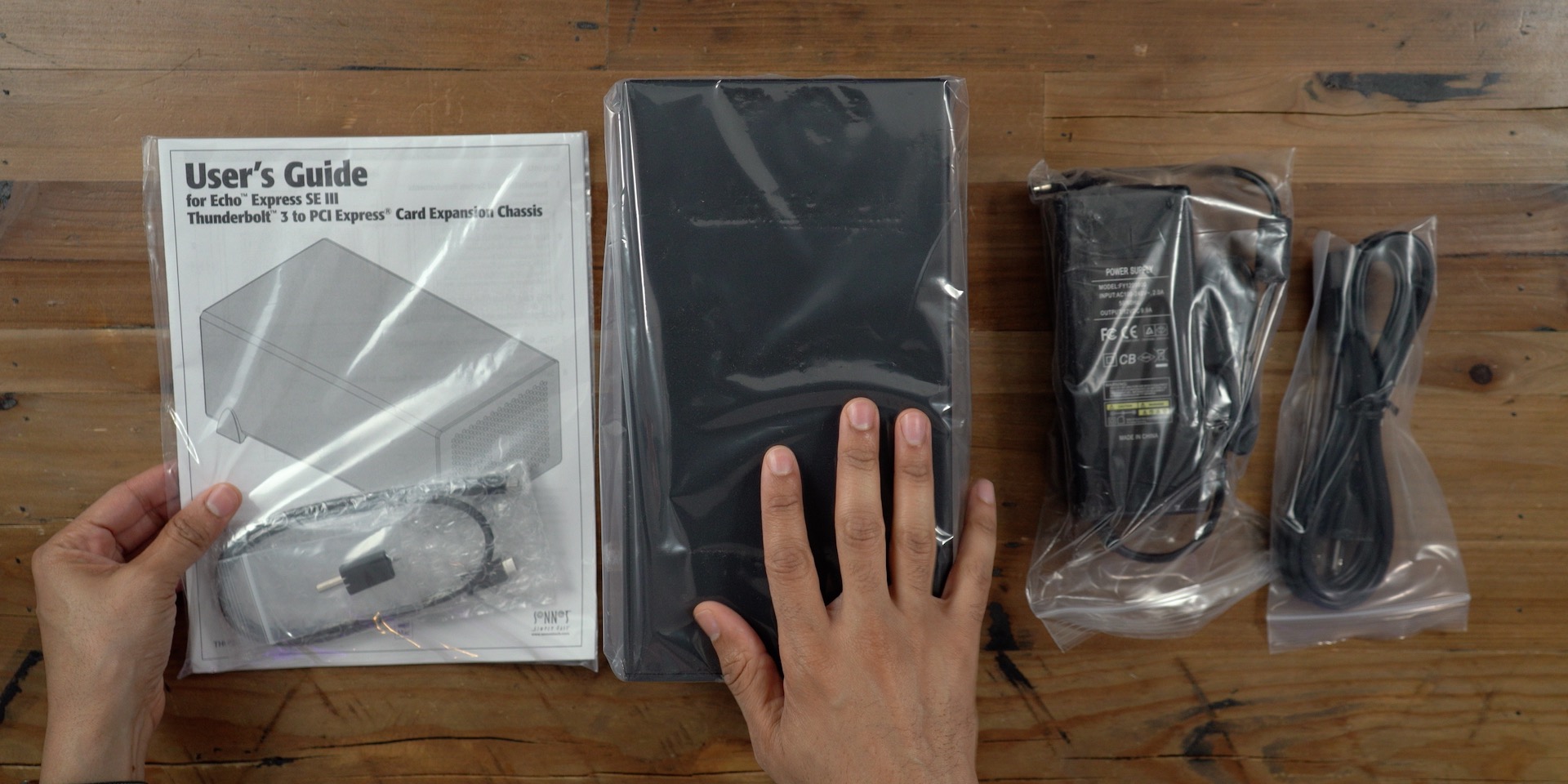 Installing the DeckLink Cards inside the Sonnet chassis

To gain access to the enclosure you’ll need to remove the four screws on the underside of the chassis. Once you do, simply push on the rear of the unit, and the outside portion of the chassis separates from the inner portion. 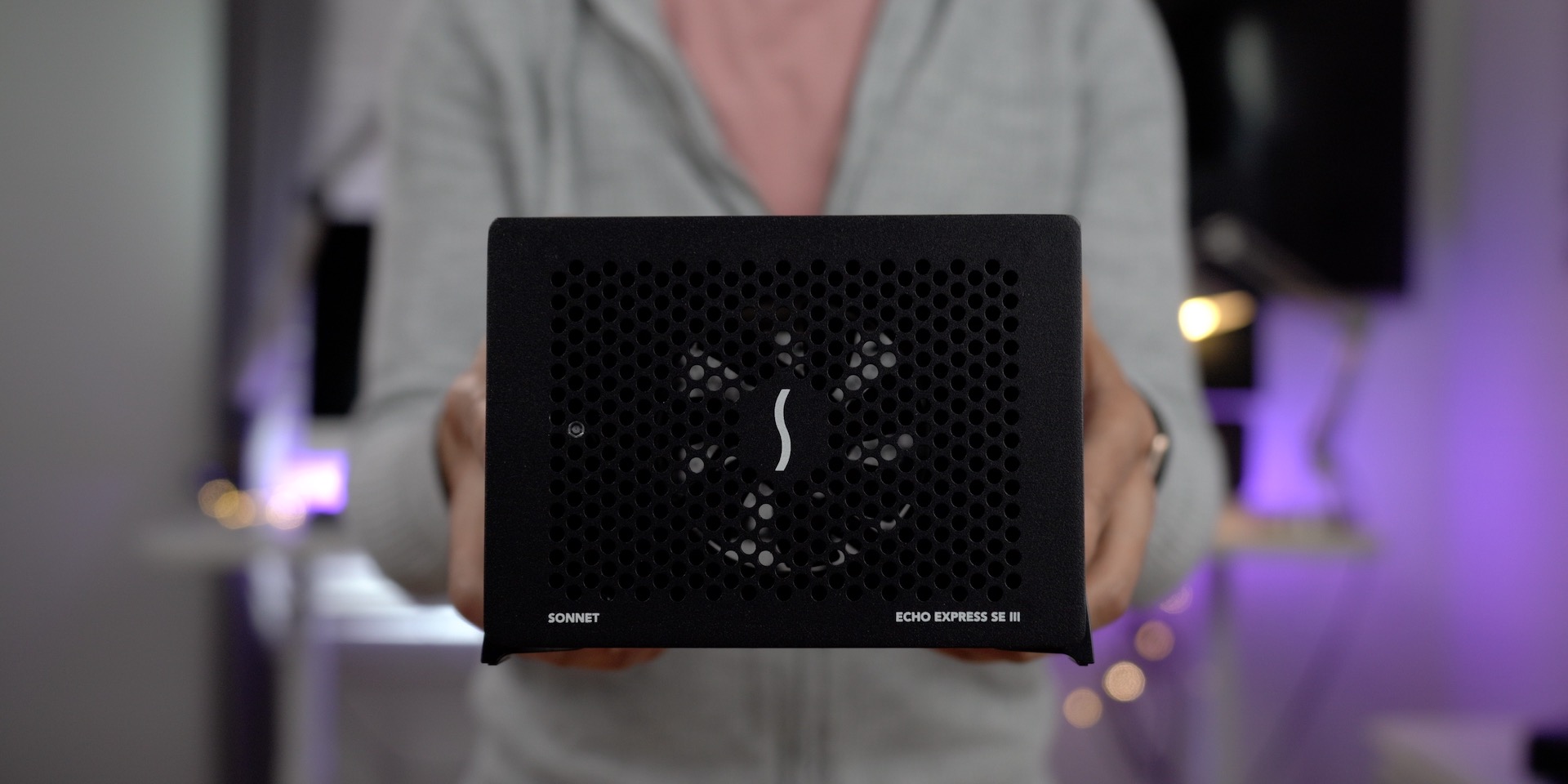 Inside the Echo Express SEIII you’ll find three empty PCIe 3.0 x8 slots, which support three full-height, half-length+, single-width cards, or one double-width card plus one single-width card. All three of the slots are x8 mechanical slots, but the first slot is wired as x4. You’ll need to check the requirements of your expansion card to ensure its compatibility with the x4 slot. 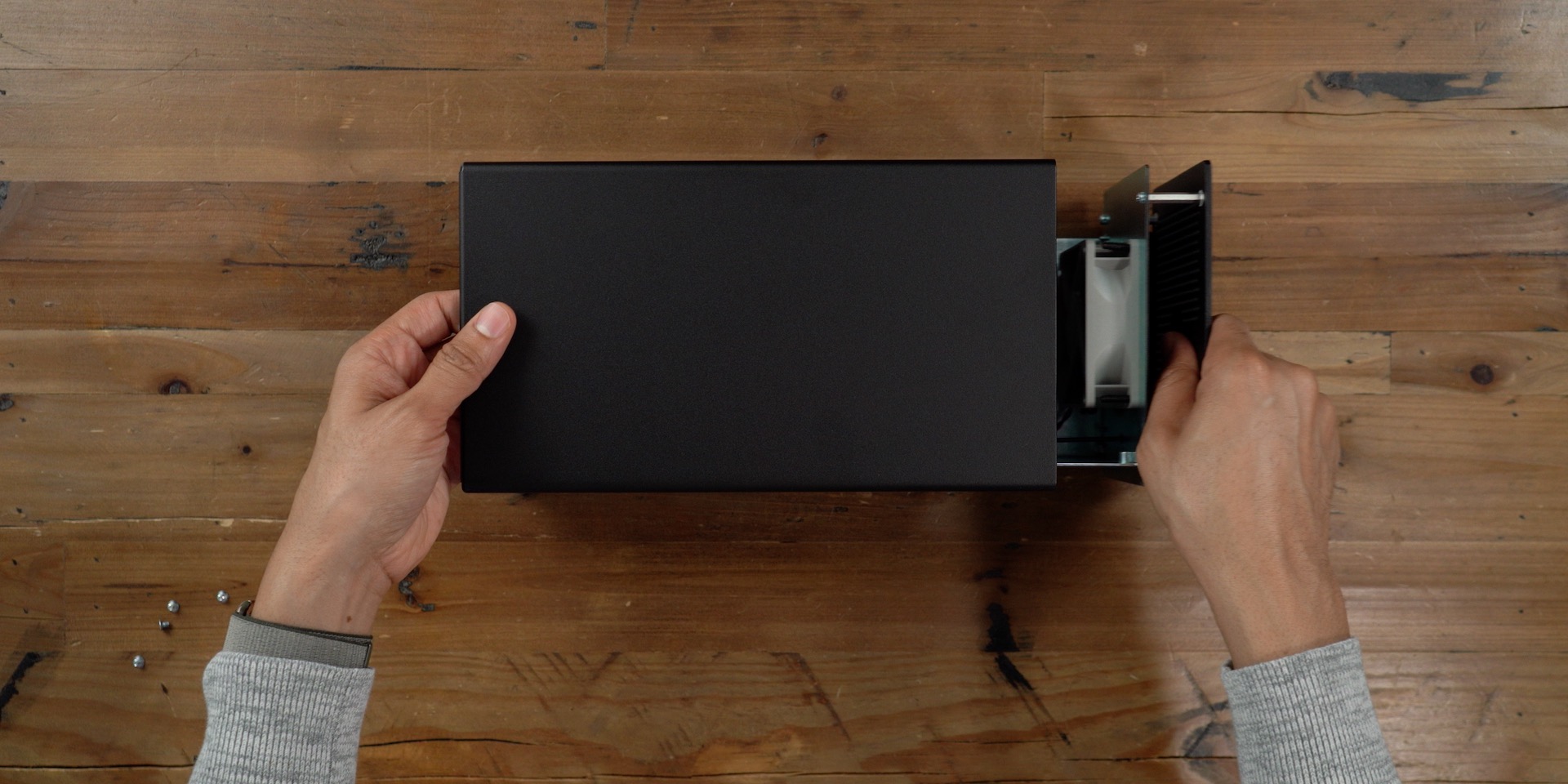 Beneath the three expansion slots, you’ll find the two-port Thunderbolt 3 interface card, which is already pre-installed for your convenience. Obviously you wouldn’t want to remove this card, because that’s how the unit is able to interface with your Thunderbolt 3-equipped Mac. 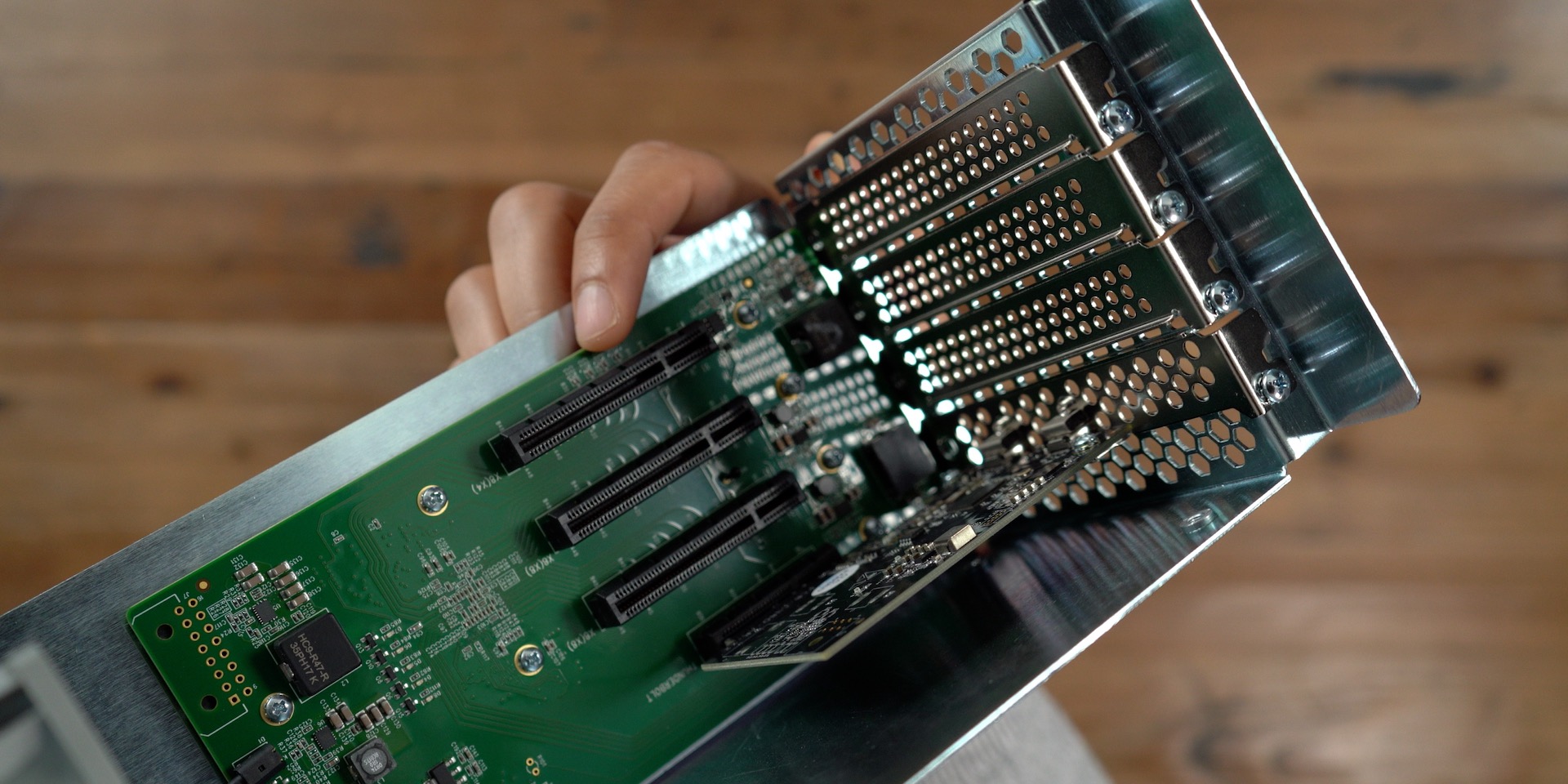 You’ll need to remove the screws securing the port access covers for the ports that you wish to use. Once you do that, it’s just a matter of installing your desired expansion cards. 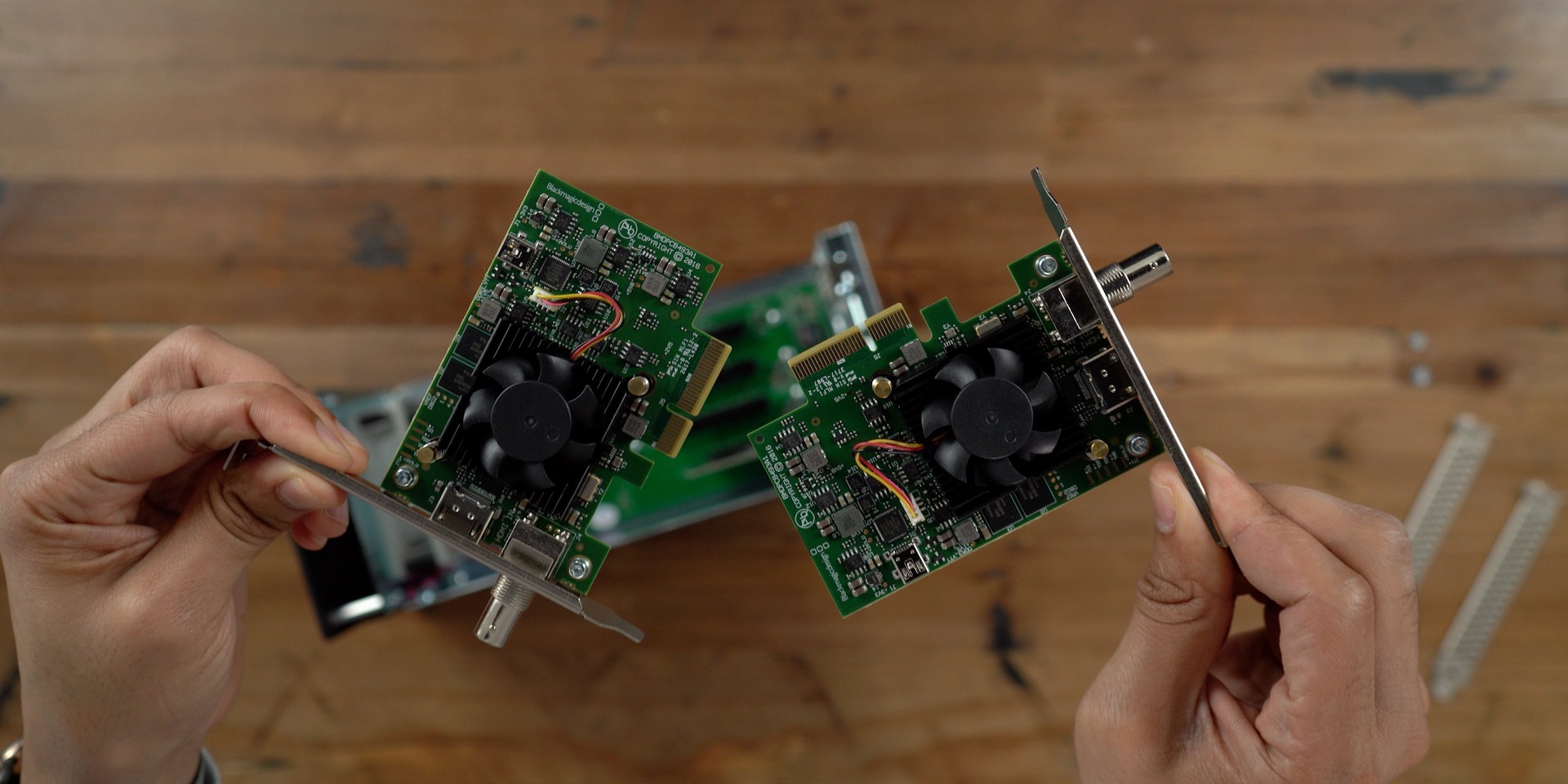 As I noted at the outset, my goal was two create a dual capture device by means of two Blackmagic Design DeckLink Mini Recorder 4K PCIe expansion cards. These cards only require a x4 slot, so I was free to install it inside either of the three slots inside the chassis. 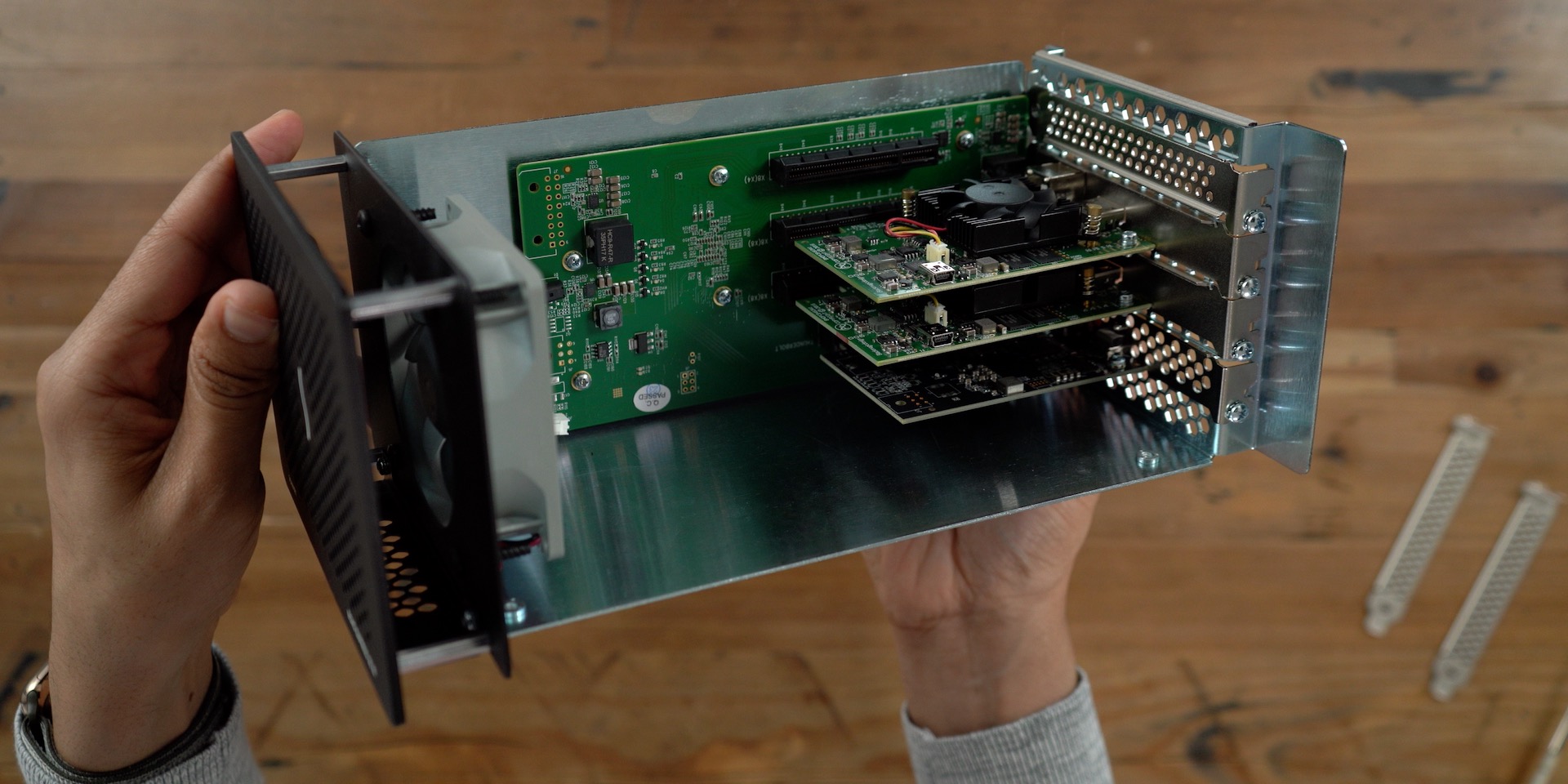 Before reinstalling the outer chassis, I want to take a second to praise Sonnet for doing the good deed of using a Noctua cooler instead of some cheap off-brand fan that sounds like a jet engine when connected to your Mac. This is a small detail, but one that is very appreciated coming from someone who is overly sensitive to noise. 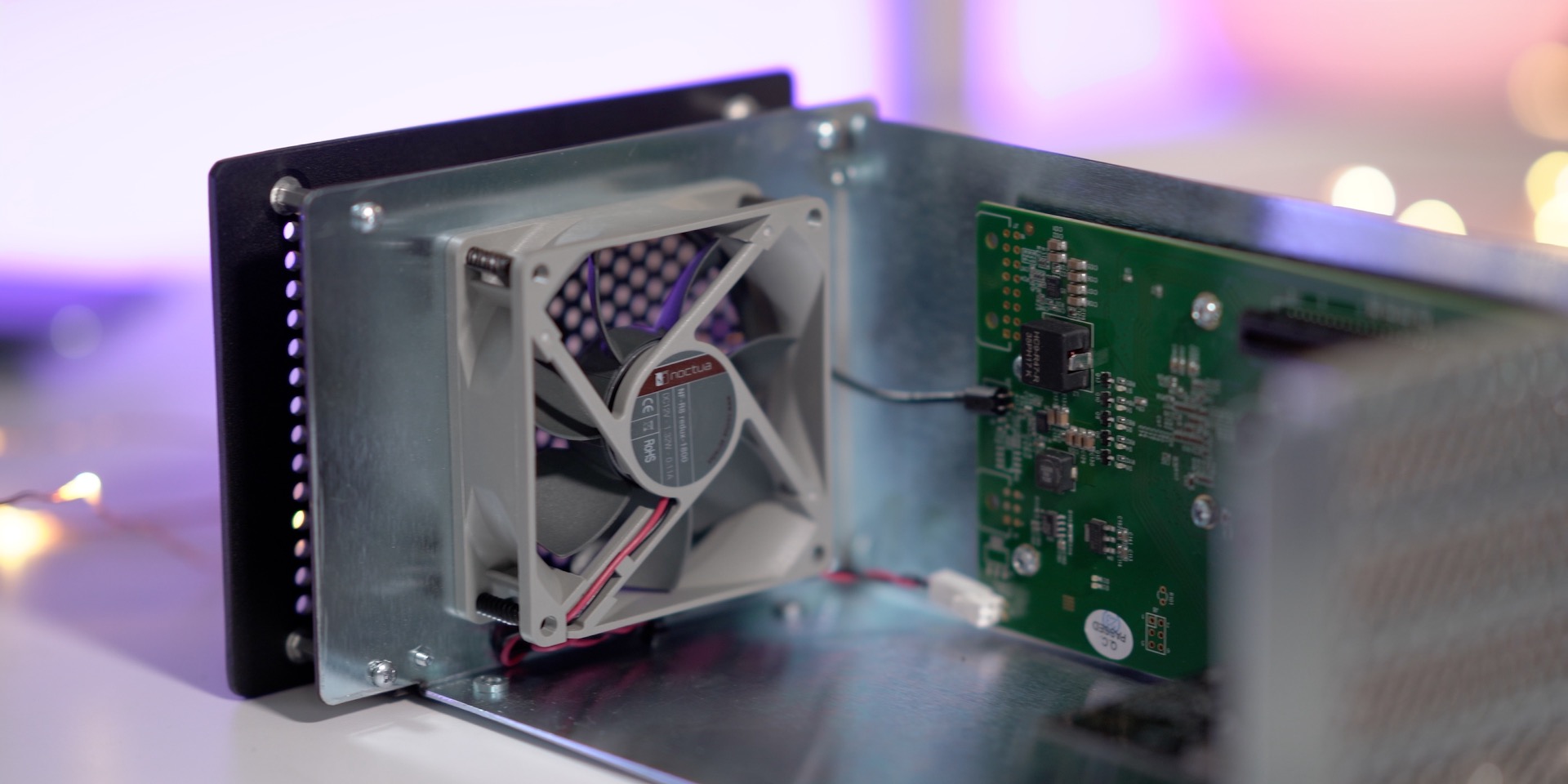 Now we can reinstall the outer chassis, connect to power, and connect a Thunderbolt 3 cable to a Thunderbolt 3-enabled Mac, which is virtually every Mac that Apple sells these days. I choose to connect the unit to my iMac Pro, as it’s well-equipped to handle the bandwidth requirements that stem from capturing two data-hungry 4K streams simultaneously. 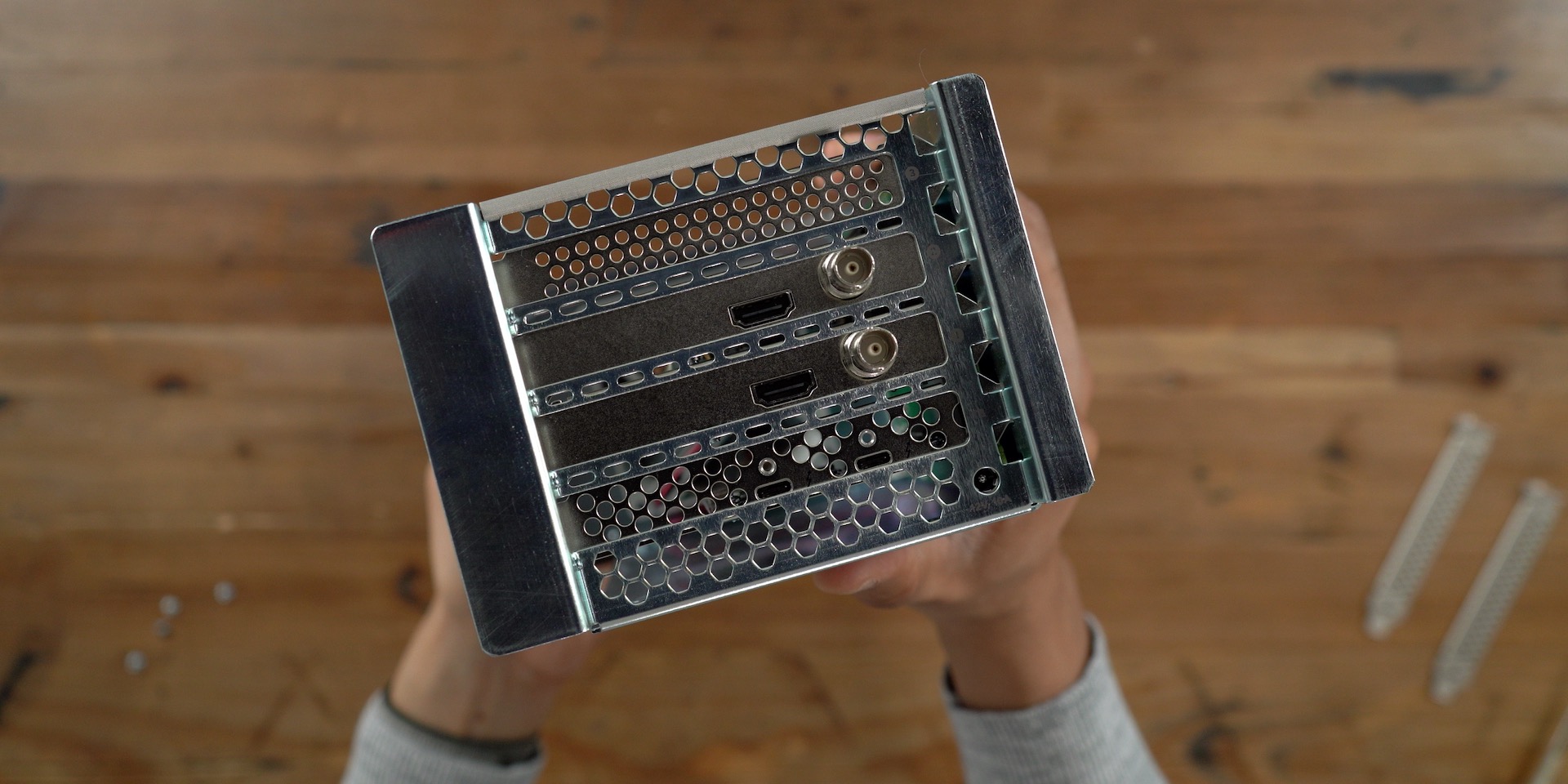 Connecting to cameras and capturing video

In this example, I connected two Sony A7 III cameras via HDMI. The cameras were configured to output UHD 4K at 30fps, which is the maximum resolution/frame rate combination that the DeckLink Mini Recorder 4K can handle. 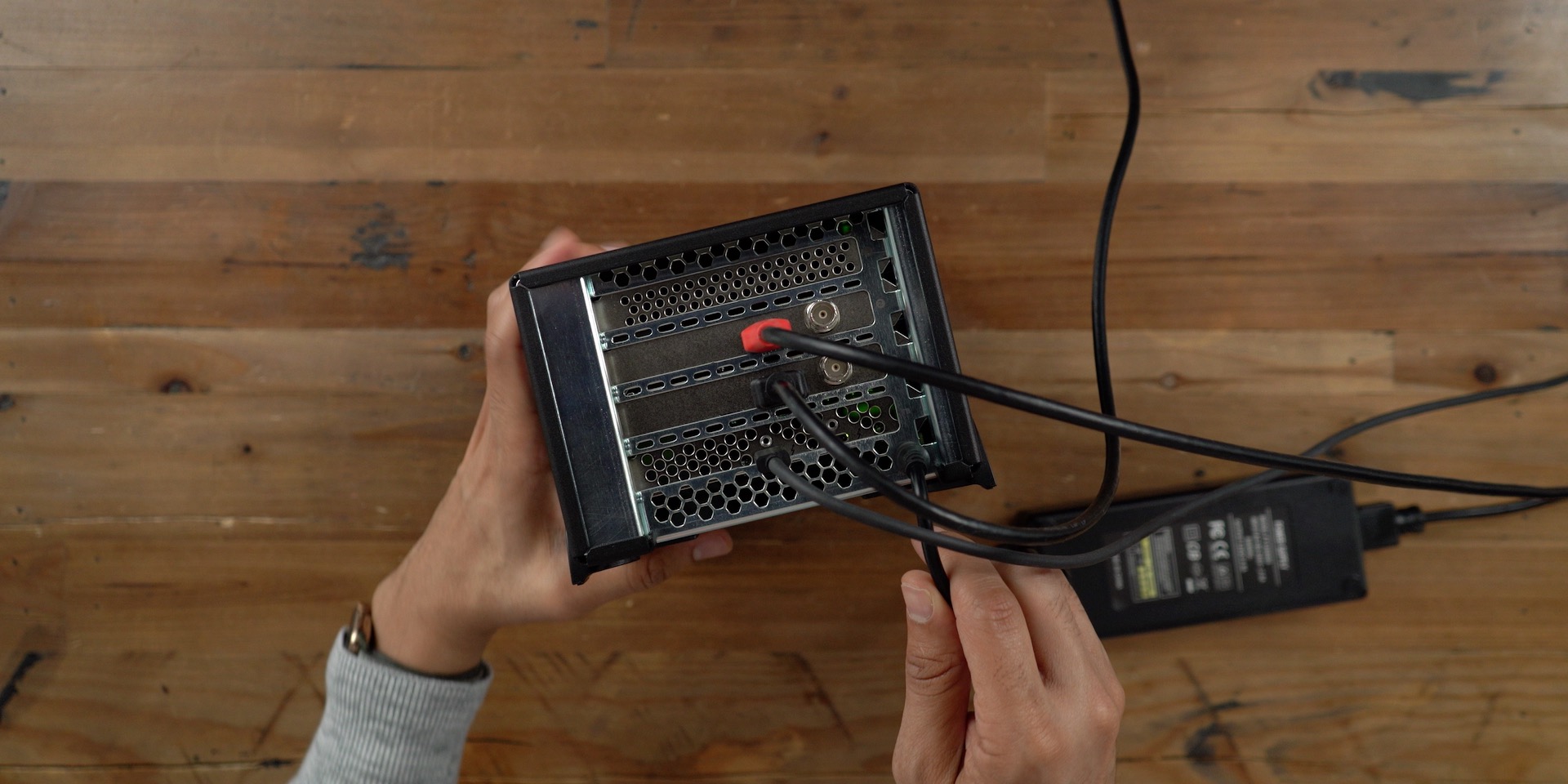 Although these cards will work with a variety of streaming and capture apps, I opted to stick with Blackmagic’s Media Express app, which is installed as a part of the Desktop Video 11.1 installation and configuration. Media Express doesn’t feature the breadth of customization options that some apps enjoy, but it was able to capture 4K ProRes 422 HQ — probably overkill considering the source footage — reliably with no issues. 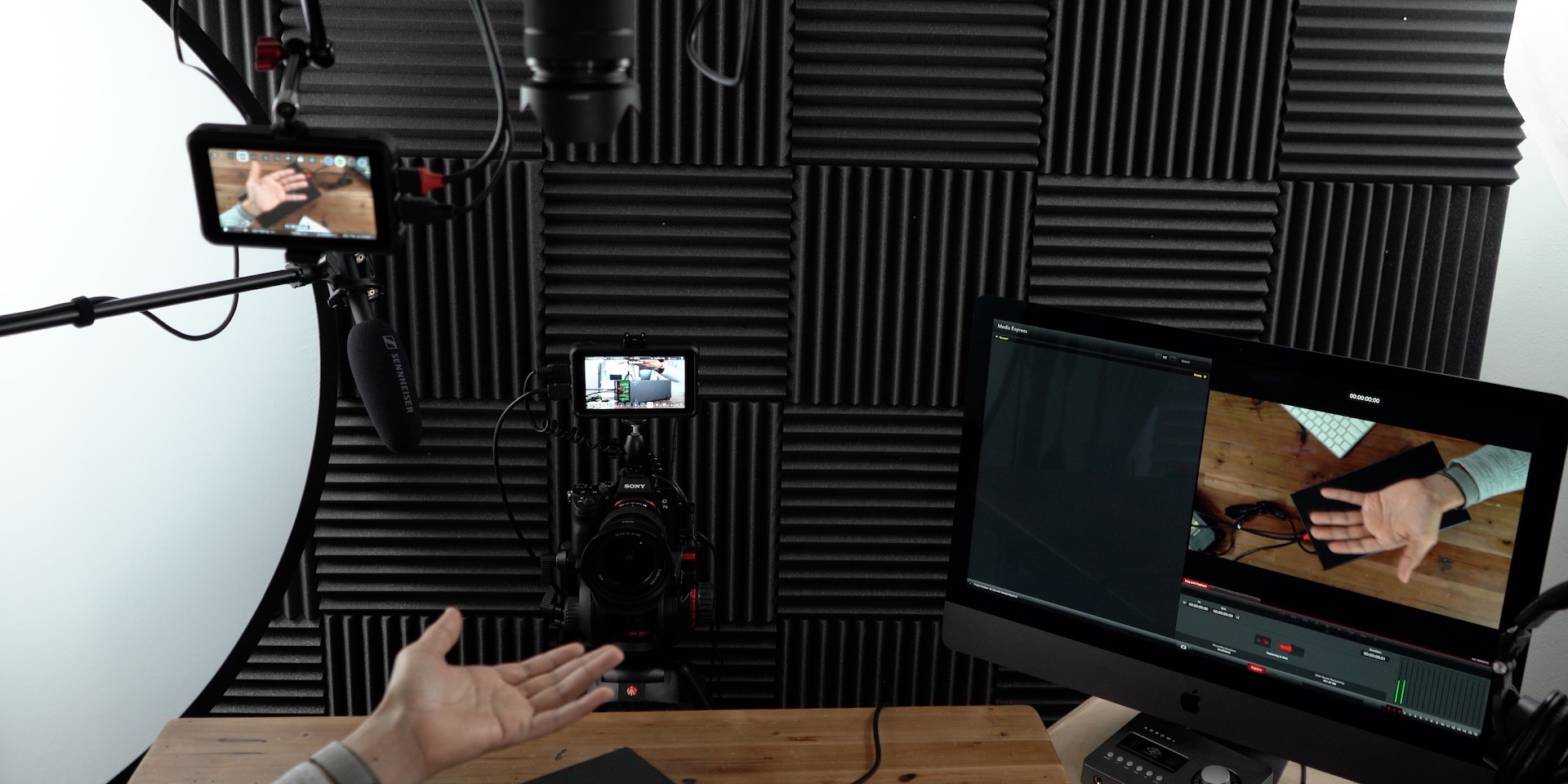 What’s even more impressive is that I can capture recordings from both cameras at the same time with no lag, latency issues, etc. This is a testament to how well the Blackmagic/Sonnet setup works, but it’s also a testament to the iMac Pro, whose 8-core CPU and fast SSD are able to handle such a load without dropping frames. 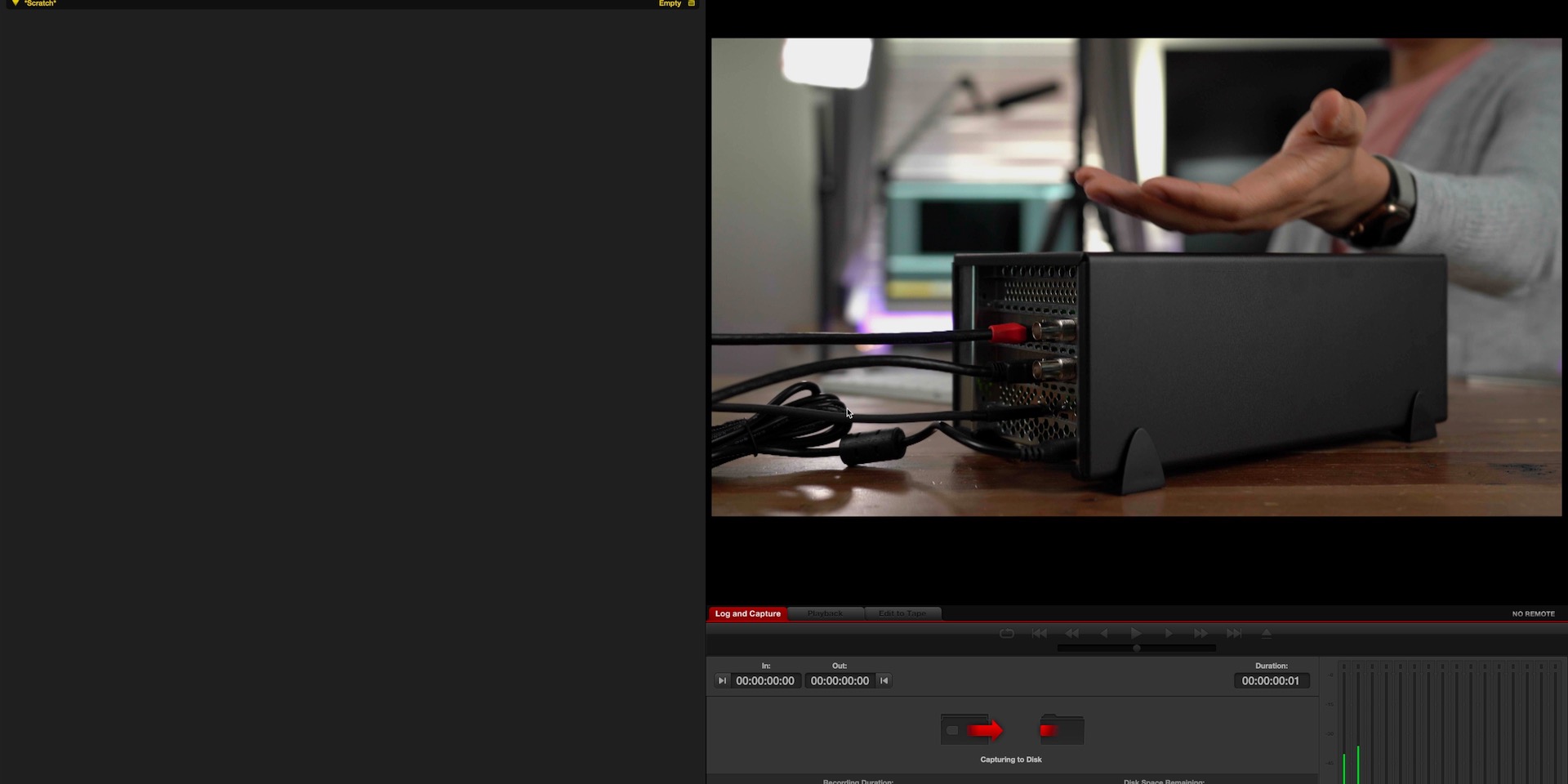 I’ve recorded terabytes of footage during my testing, and this setup has worked perfectly for me. I also tested live streaming via OBS and with Google Hangouts, and it worked just as expected.

I love this 4K ProRes video capture setup because it allows me to click just a couple of buttons and immediately start capturing high quality footage on my Mac for easy editing. I actually have an entire workflow that revolves around this setup, and I’ll gladly share some behind the scenes detail on that if readers want it. If you haven’t already, be sure to subscribe to 9to5Mac on YouTube, as I’ll be sharing more tidbits related to this setup on there as well. 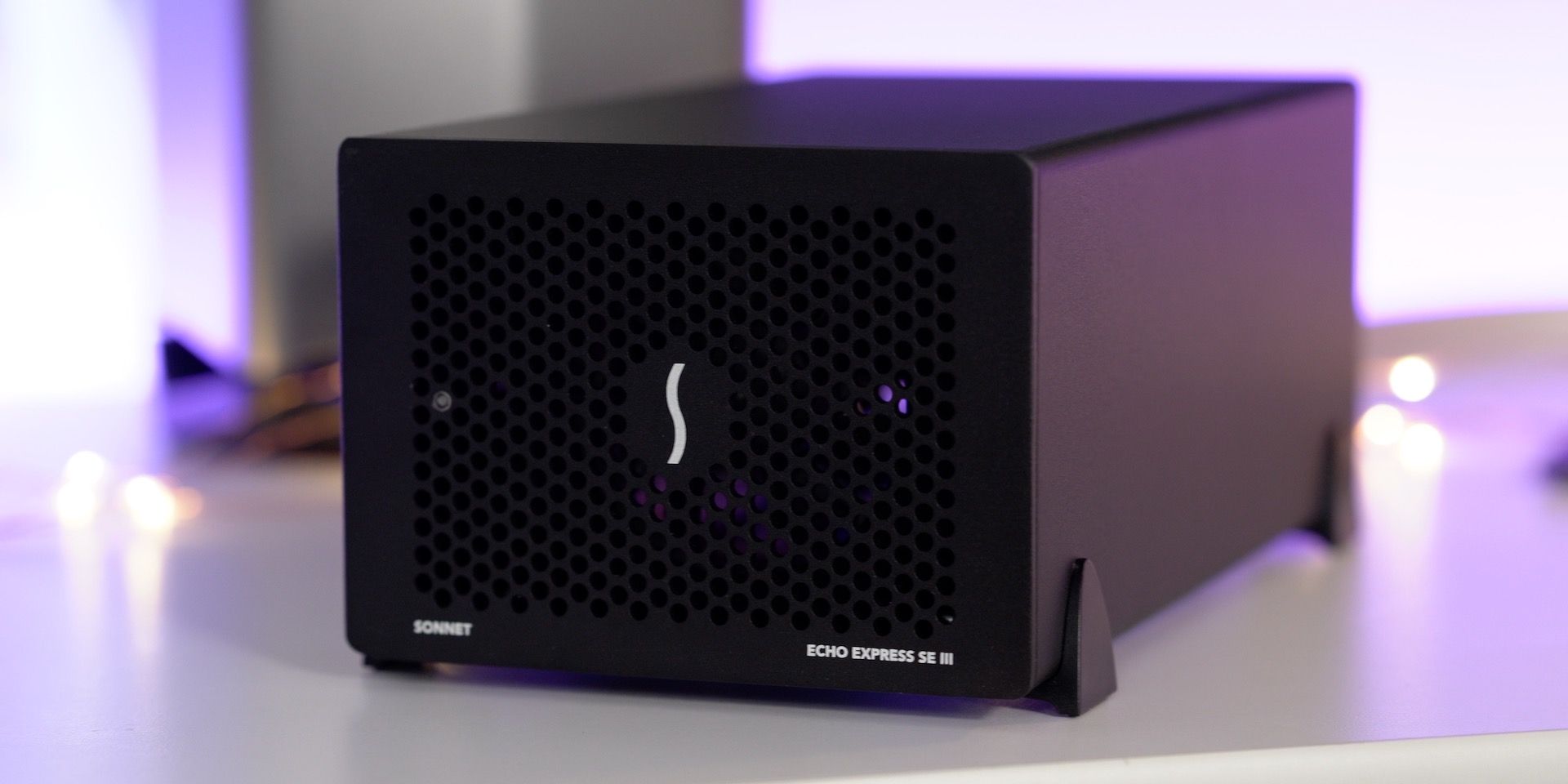 Before I got the idea to use Sonnet’s Echo Express SEIII, I was actually using two eGPU chassis to house one DeckLink Mini Recorder 4K Card in each. This, of course, required two power supplies, and two Thunderbolt 3 cables as well. eGPU boxes are also quite large and their fans aren’t exactly quiet. While such a setup technically worked, it wasn’t ideal due to the size, amount of cabling, and the sound that emanated from two eGPU chassis fans. 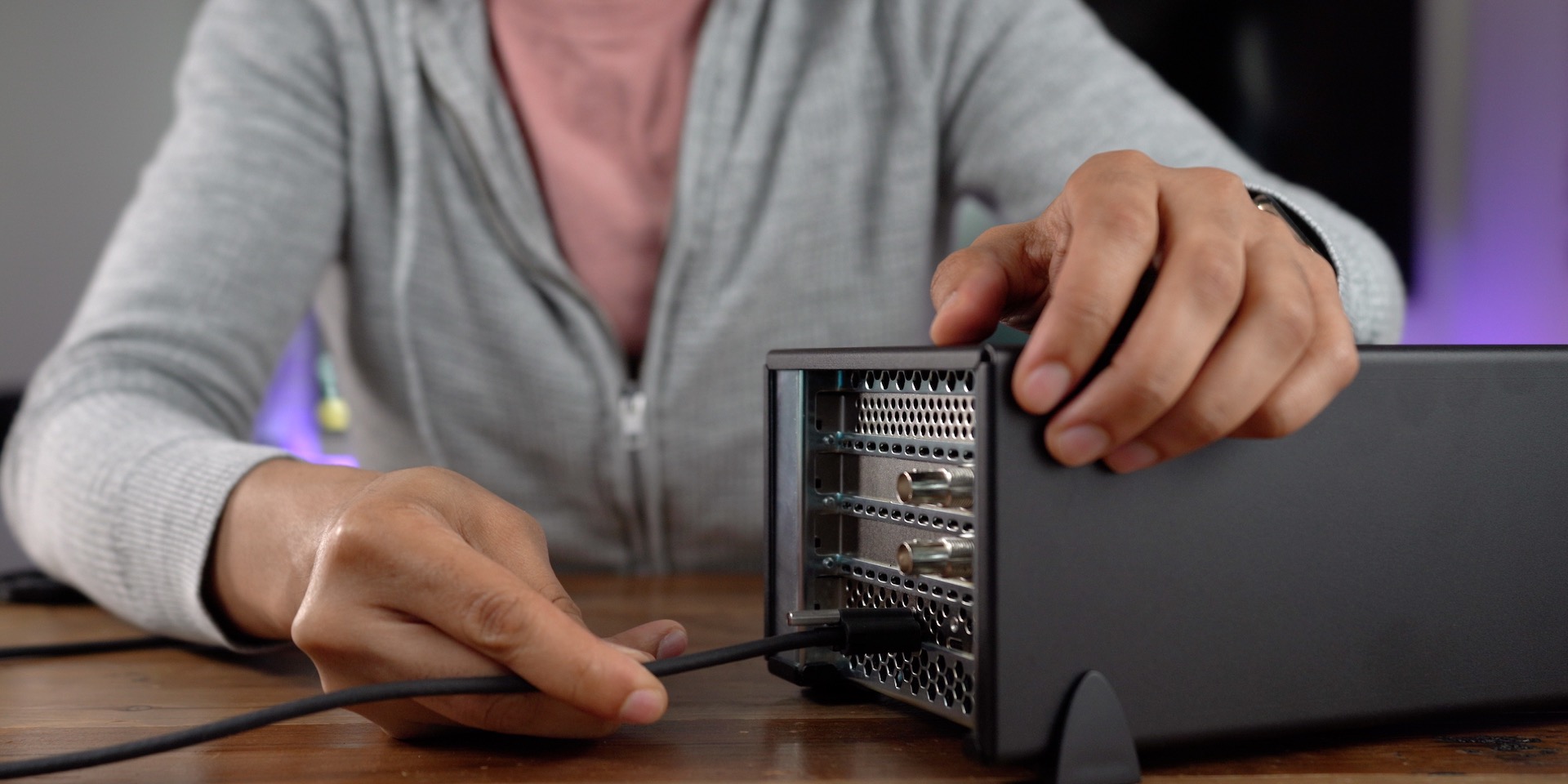 The Echo Express SEIII is a night and day difference over my previous setup. The unit, which features dimensions of 6.5 x 11 x 4.6 in., neatly tucks away underneath my camera rig, only requires one Thunderbolt 3 cable, one power supply, and is uber-quiet thanks to that Noctua fan. 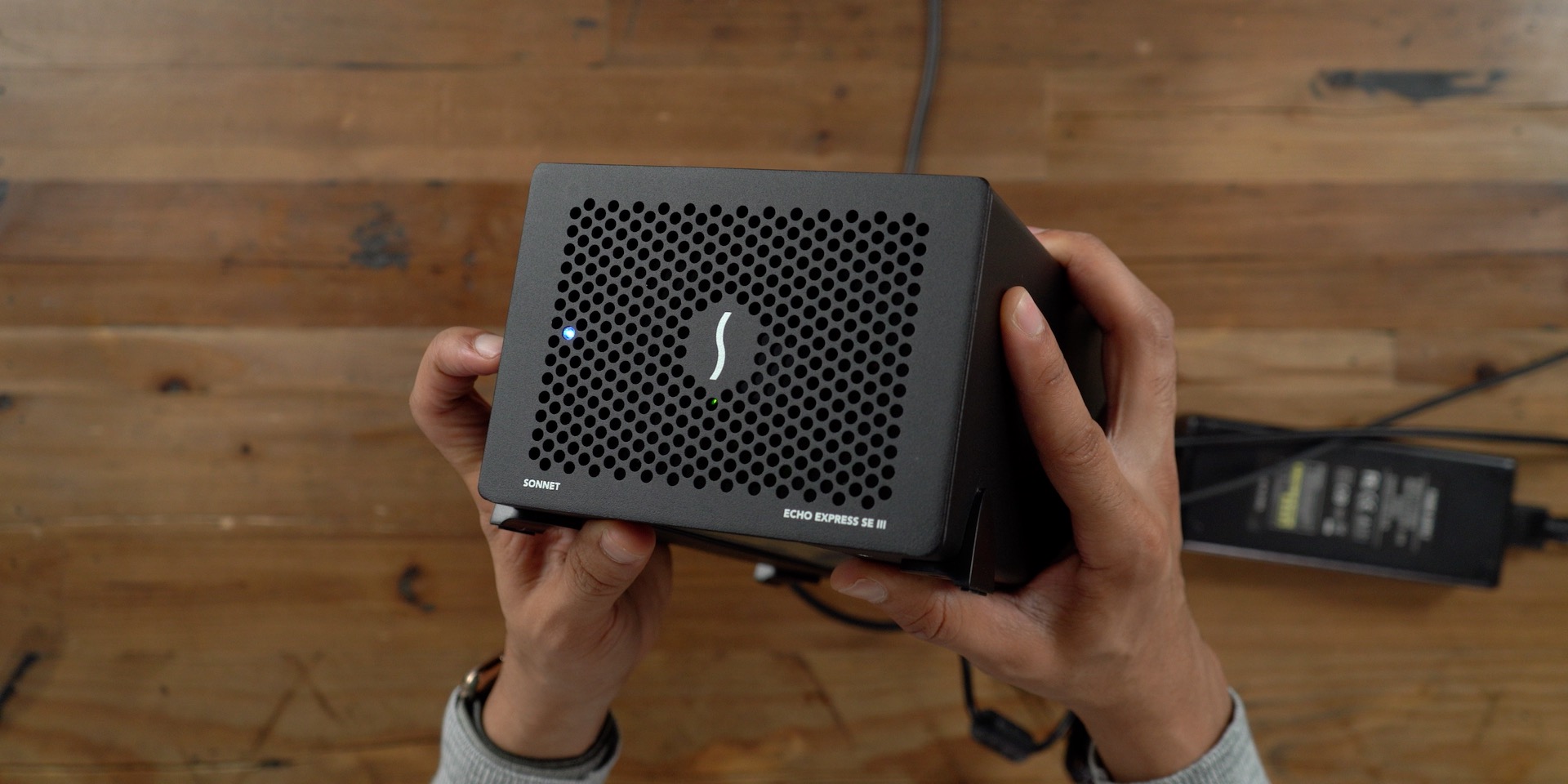 A lot of praise goes to the Blackmagic DeckLink card as well. It has improved my studio setup with no downsides that I can think of. Even better is the fact that I still have that extra PCIe slot to work with, in case I want to add an SSD or 10GbE expansion card later on down the line. 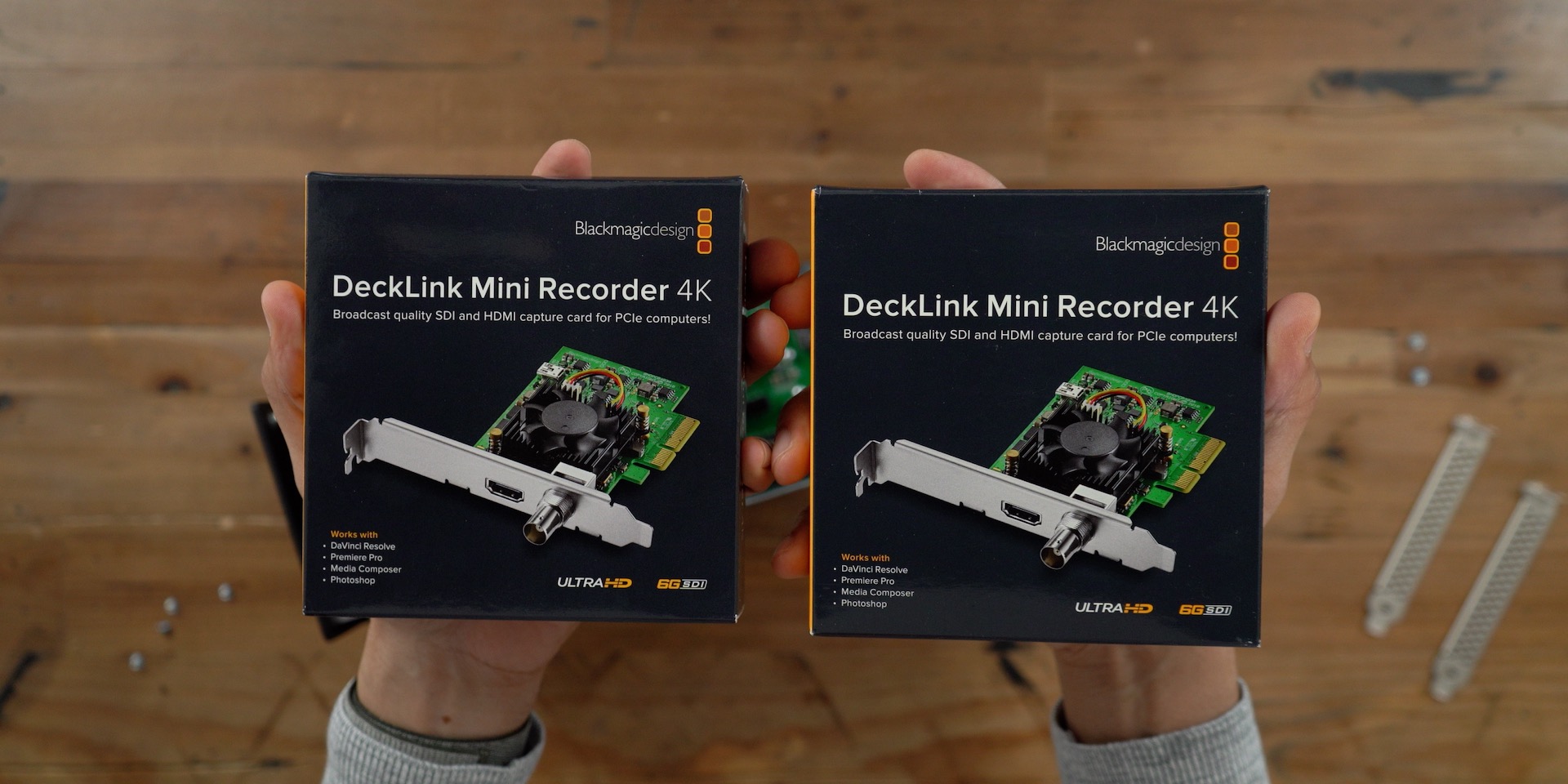 If you need to connect more than one PCIe expansion card to your Mac, then look no further than Sonnet’s $449 Echo Express SEIII. Sonnet also offers a less expensive chassis with just a single slot — the Sonnet Echo Express SE1 — if you know you won’t ever need to use more than one card. 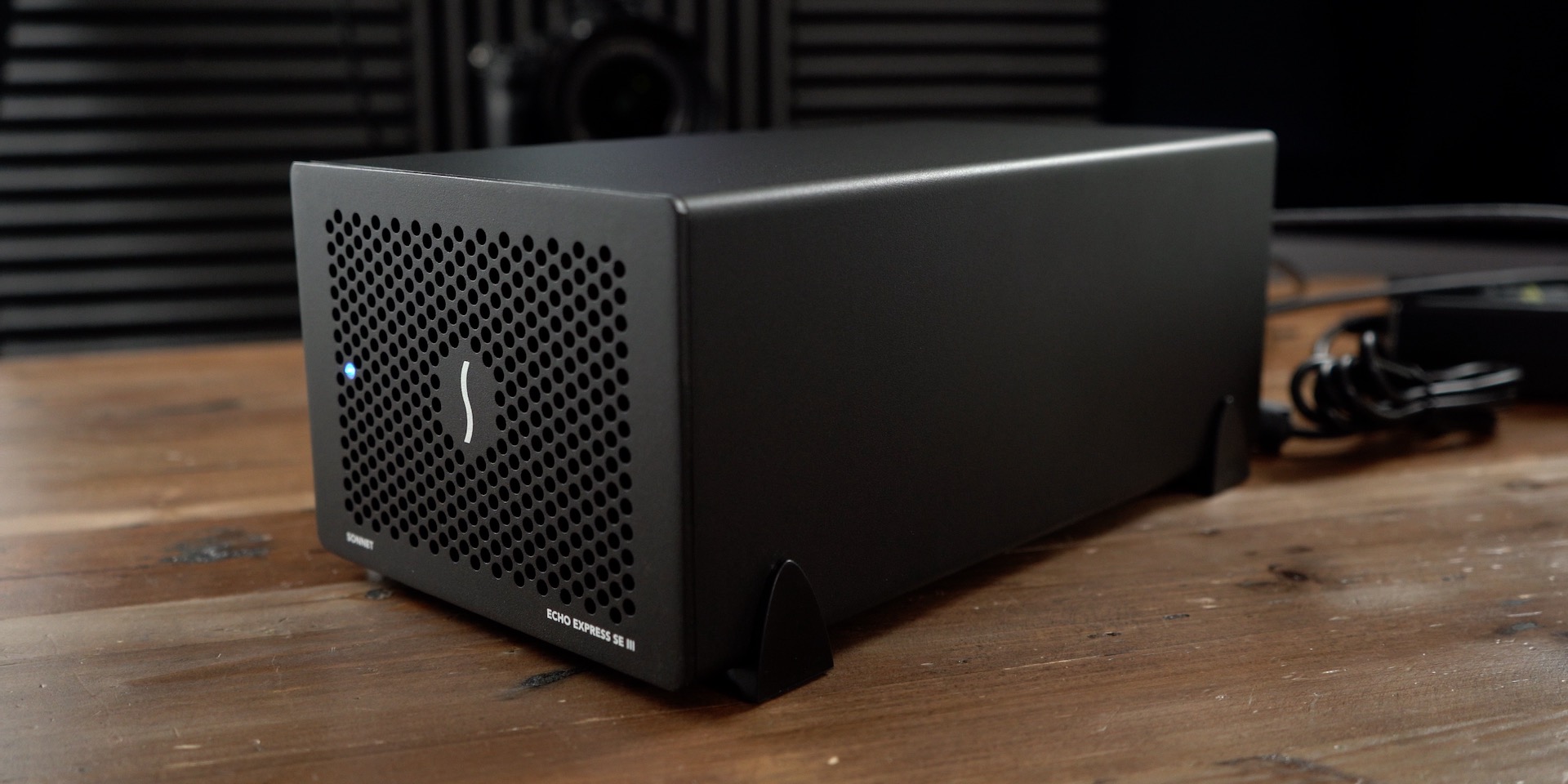 What do you think about my 4K video capture enclosure using Sonnet and Blackmagic’s hardware? Do you have any questions, suggestions, or observations? Please feel free to sound off down below in the comments with your thoughts.

P.S. for more details on the overhead shooting rig, check out my video on 9to5Toys, which also has a YouTube channel you should consider subscribing to.