The best Thunderbolt 3 accessories for your Mac [Video] 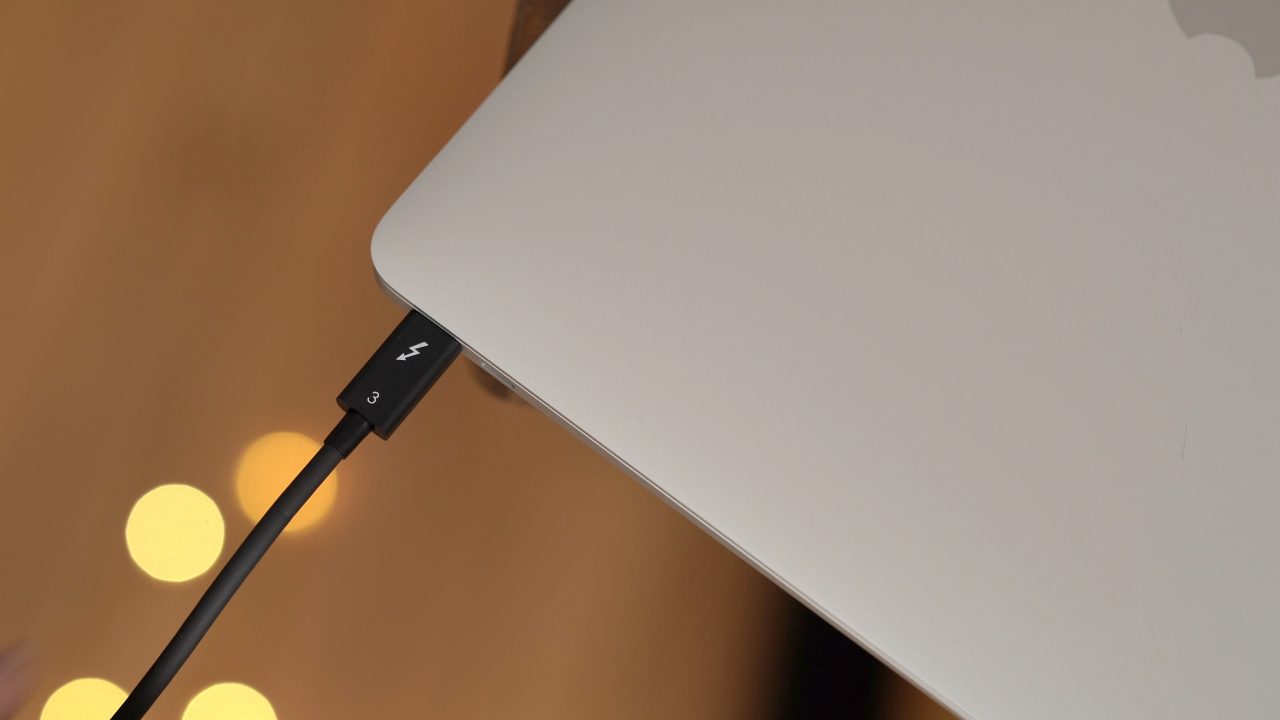 Thunderbolt 3 is in a much better state today than it was when it debuted on the 2016 MacBook Pro. Time has been friendly to the technology, with the majority of Macs in Apple’s lineup now equipped with the super-fast I/O. With its growing adoption in mind, watch our hands-on video as we consider some of the best Thunderbolt 3 accessories for the Mac.

The Promise Pegasus3 lineup of raid enclosures has great options for those who need lots of fast on-demand data storage. That makes the Pegasus3 perfect for storing high-resolution, high-bitrate video. If you shoot RAW video, or even high quality ProRes video, the Pegasus3-series may be an ideal solution.

Because it can accommodate both HDDs and SSDs, users have the flexibility to go for the most amount of storage with traditional spinning media (up to 80TB with the 8-bay model), or the fastest RAID setup with solid state drives.

I’m a big fan of using Synology’s NAS hardware for storing my Final Cut Pro X projects, especially with the advent of built-in 10-Gigabit Ethernet on the iMac Pro and Mac mini. However, there’s no denying that having direct access storage is a desirable solution if you work in an environment that doesn’t necessarily require networked storage. Being able to access all of that storage via a single Thunderbolt 3 cable, which can also charge your MacBook Air or MacBook Pro, is a luxury in and of itself.

Interestingly, the Promise Pegasus3 R6 is the only Thunderbolt 3 accessory on this list that we haven’t done a dedicated video about, but we did consider it in our overview of the best iMac Pro accessories around this time last year. We’ll be back with additional coverage of the Promise Pegasus3 in upcoming coverage.

The Arrow is a Thunderbolt 3 Audio interface from Universal Audio, a company with a long history in the audio industry. It’s what I use to perform the majority of my voice-related work on the Mac, including Final Cut Pro X voiceovers.

The best thing about the Universal Audio Arrow (hands-on), besides its bus-powered Thunderbolt 3 connectivity, are its UAD-2 plug-ins. These plug-ins include compressors, EQs, reverbs, preamp emulations, guitar amp emulations, etc., and can alter an instrument or voice in real-time.

Coupled with the solid aluminum build quality, space gray color, and the rear placement of dual XLR inputs, the Arrow is easily one of the best Thunderbolt 3 accessories released in 2018.

If you’re looking to add additional I/O to your MacBook Pro or MacBook Air, then the CalDigit TS3 Plus (review) is the way to go. It features a bevy of ports, including front-facing USB-C and USB-A ports, and a front-facing UHS-II SD Card slot. It also has dual Thunderbolt 3 ports, with 5K display passthrough ability, along with a heaping-helping of additional I/O.

In my initial review of the TS3 Plus, the hardware was only available in silver, but since then, CalDigit has released a new space gray option that looks great next to space gray Mac hardware. CalDigit’s dock is so useful, one could make an argument for it being the top dog in our best Thunderbolt 3 accessories list.

Sonnet’s powerful external graphics box isn’t my favorite eGPU on this list, but it’s the most powerful eGPU that Apple officially recommends, which makes it worthy of appearing here. If you need more graphics power for your MacBook Air, MacBook Pro, or Mac mini, then an eGPU is one surefire way to get it.

Although Sonnet’s eGPU garners an official recommendation in Apple’s support documentation, my favorite eGPU chassis is the Razer Core X (review). It features a thoughtful design, with high-quality build materials. It also features a power supply that works with the fastest AMD cards, and it’s super easy to install and remove graphics cards thanks to its tool-less setup.

The Razer Core X is as little bit bigger and heavier than the Sonnet chassis, but it also works with three-slot-wide graphics cards, and to my knowledge, it’s the only external graphics enclosure capable of doing so thus far. It’s easily among the best Thunderbolt 3 accessories, and in my opinion, it’s the best eGPU chassis available.

Right off the bat I want to say that the Blackmagic eGPU (review) isn’t a very good value. Yet, there’s no denying that it’s a product that may prove to be useful for a special subset of users. At $699, the RX580-equipped unit is easily a few hundred dollars overpriced when just taking its non-upgradable performance into consideration.

However, the Blackmagic eGPU has a few things going for it like its beautiful and super-quiet enclosure that’s barely audible, even when under load. The unit is also one of the only eGPUs to utilize Intel’s Titan Ridge Thunderbolt 3 controller, which allows it to interface directly with Thunderbolt 3 displays like the LG UltraFine 5K Display, via a second on-board Thunderbolt 3 port.

The follow-up to the Blackmagic eGPU, the upcoming Blackmagic eGPU Pro, is even more egregious when it comes to pricing — it retails for $1199, and will ship later this month. But even at that price, there’s a subset of users who have specific requirements, namely a quiet operating environment, who will appreciate the extra power offered by the faster RX Vega 56 GPU inside.

Up until the release of the 2018 Mac mini, the iMac Pro was the only Mac computer that featured 10GbE connectivity out of the box. Whereas such connectivity is standard on the iMac Pro, it’s a build-to-order option on the Mac mini. Apple’s laptops outright lack Ethernet connectivity altogether, which makes Akitio’s T3-10G adapter (review) such a compelling product.

The bus-powered T3-10G brings 10-Gigabit Ethernet connectivity to any Thunderbolt 3-enabled Mac. And if your Mac already has a 10GbE port, you can add a second connection with Akitio’s adapter.

If you require 10GbE connectivity, but also need additional I/O, like a UHS-II SD Card slot, CFast 2.0, and others, then Akitio’s Thunder3 Dock Pro (review) is probably the right solution for you. It’s not bus-powered, so it’s not as portable as the T3-10G, but with the presence of additional I/O, it’s more apt for a permanent desktop dock location anyway.

The OWC Express 4M2 (review) is an extremely handy M.2 flash storage RAID enclosure, which affords a large amount of insanely fast storage space that’s apt for video editing. Capable of accommodating up to four 2TB M.2 NVMe SSDs simultaneously for up to 8TB of storage, the OWC Express 4M2 has been my go-to destination for all of my in-progress videos since September 2018.

The 5K2K display doesn’t provide users with as much resolution as a true 5K display, but it’s a solid upgrade over 4K displays. Its extra wide working area is perfect for timeline-based apps like Final Cut Pro X, which benefit from the extra horizontal real estate.

If you need a real 5K display, with full 5120 x 2880 resolution, then you’ll need to consider LG’s other Thunderbolt 3-based offering, the LG UltraFine 5K Display (review). This display experienced a tumultuous launch, with pricing controversies, and a major design flaw that caused early units to black out when placed too close to a router, but that issue has since been fixed.

I’m not a huge fan of its super-glossy screen, and its lack of any display input besides Thunderbolt 3, but when it comes to 5K displays of this ilk, options are severely limited.

LG’s UltraFine Display was supposed to be the direct replacement for the discontinued Apple Thunderbolt display, but its build quality (it’s all plastic, just like the aforementioned LG UltraWide 5K2K) leaves a lot to be desired.

Until Apple makes a comeback with new displays, this is the best standalone 5K display with Thunderbolt 3 compatibility. It’s a solid offering, but I wish there were more options on the market.

Sometimes you just need the ability to connect your Mac to an external display, and the Elgato Thunderbolt 3 Mini Dock (review) is one of the easiest ways to do so. Featuring both DisplayPort and HDMI, Elgato’s Mini Dock allows you to connect up to two 4K displays at 60Hz via a bus-powered adapter. As a bonus, the dock also includes Gigabit Ethernet and a 5Gbps USB-A port.

Besides the obvious display connectivity benefits, the thing that sticks out to me about Elgato’s dock is its design. The dock features a built-in, permanently attached Thunderbolt 3 cable that neatly stows away inside the bottom of the device for easy portability.

The Samsung X5 (review) is the upgraded Thunderbolt 3 version of Samsung’s popular external SSD lineup. Posting speeds that are much more akin to the internal storage built into your Mac, the X5 is a great way to gain additional storage space without heavily sacrificing on speed. These drives make working with high-bitrate, high-resolution video much easier on the go, because the units are small, portable, and bus-powered.

The G-Drive Mobile Pro SSD (review) is the closest competitor to the Samsung X5, offering similar performance at a competitive price. Its design is quite a bit different than Samsung’s offering, but it’s similar in that it’s portable, bus-powered, and features blistering read and write speeds.

If you own a large swath of Thunderbolt 3 devices, longer 2-meter active cables are a great investment. CalDigit’s longer cables (hands-on) are just as fast as the standard 0.5-meter cables, but offer a lot more placement flexibility due to their length. Needless to say, a longer cable is one of the best Thunderbolt 3 accessories you can buy.

I’ve considered dozens of Thunderbolt 3 devices since the technology was first made available in 2016’s MacBook Pro refresh. As you might have guessed, I’m very fond of this technology because of the flexibility and expandability that it brings to the table.

2018 was a big year for Thunderbolt 3 I/O, as it saw two machines in the Mac lineup — the 2018 Mac mini and the 2018 MacBook Air — gain Thunderbolt 3 compatibility for the very first time. This means that there are now just three Mac computers that Apple currently sells — the $999 entry-level MacBook Air, the 12-inch MacBook, and the Mac Pro — that lack Thunderbolt 3 connectivity.

I hope you enjoyed our look at the best Thunderbolt 3 accessories for the Mac. Are there any items that weren’t on this list that you think should have been included? Sound off down below in the comments with your thoughts and opinions.