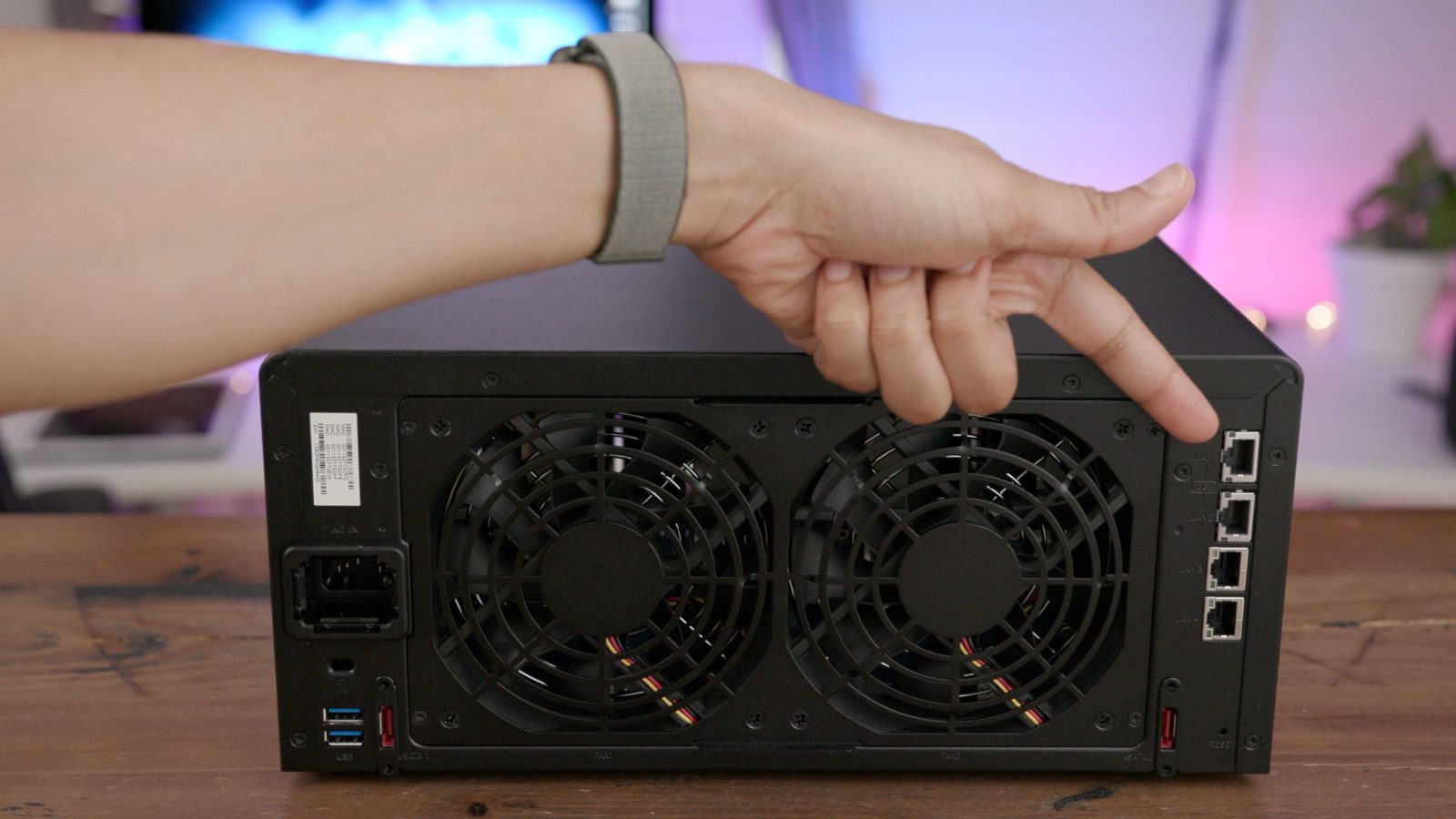 I’ve used a Synology NAS to store Final Cut Pro X libraries in the past, but the process wasn’t very straightforward at the time, and performance was never good enough to convince me to use it over the long-term. This was especially true as I started to dabble more in 4K workflows.

As we all know, the iMac Pro features built in 10GbE connectivity, which opens up the possibilities when it comes to using a NAS as a Final Cut Pro X storage solution. Final Cut Pro X also received updates in the last year in order to better facilitate working from network attached storage.

As resolutions and bit-rates get higher, storage needs will continue to increase. One of the primary questions that many video editors are bound to ask is: how do I go about working with, storing, and archiving so much data?

Solving this problem is a key element, arguably one of the most important elements in a video-centric workflow. Things have changed so rapidly in the last few years with regard to overall file size, that it makes sense to examine your storage needs on a regular basis.

When considering a NAS, the biggest bottleneck, up until now, has been the amount of available Ethernet bandwidth. 1GbE connections are much too slow to work with today’s media, and this proved to be a blockade for my workflow. Even if the interface was working at its maximum theoretical speed, that’s still only 128MB/s, which is even slower than what the iMac Pro’s new UHS-II SD Card slots are capable of.

A 10GbE connection goes a long way towards removing these bottlenecks. Synology’s DS1817 features 10GbE, making it an interesting match for the iMac Pro. 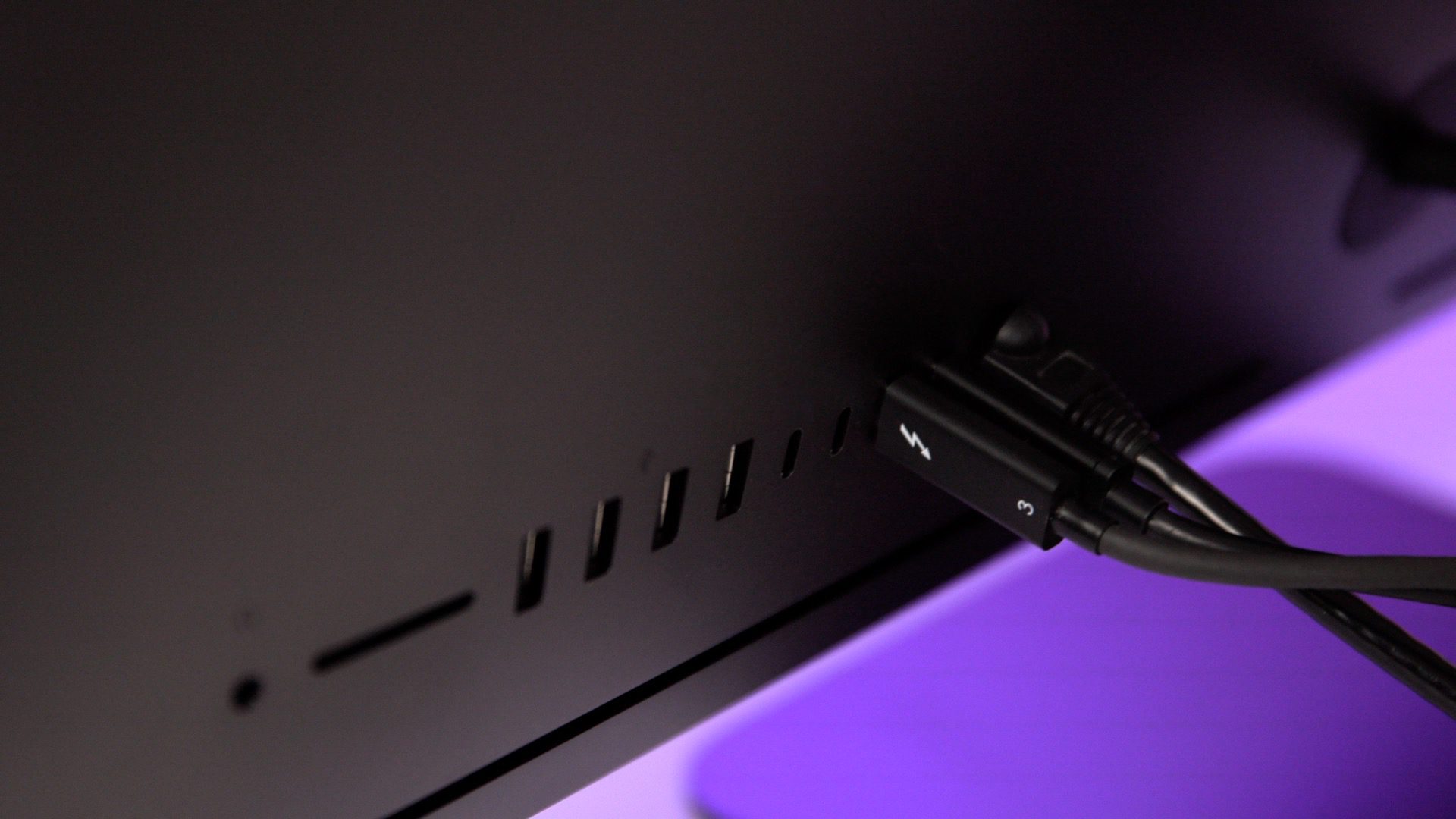 Let me preface this by stating that such a setup won’t be for everyone. If you desire a setup that’s dead simple, incredibly fast, and takes advantage of Thunderbolt 3, then you definitely want to take a look at direct attached storage solutions like the Pegasus3 series from Promise. I’ve been testing out the Pegasus3 R6 for the last few weeks, and its performance capability is nothing short of impressive. I’ll have more on my findings with Pegasus’ DAS solution in a future post. 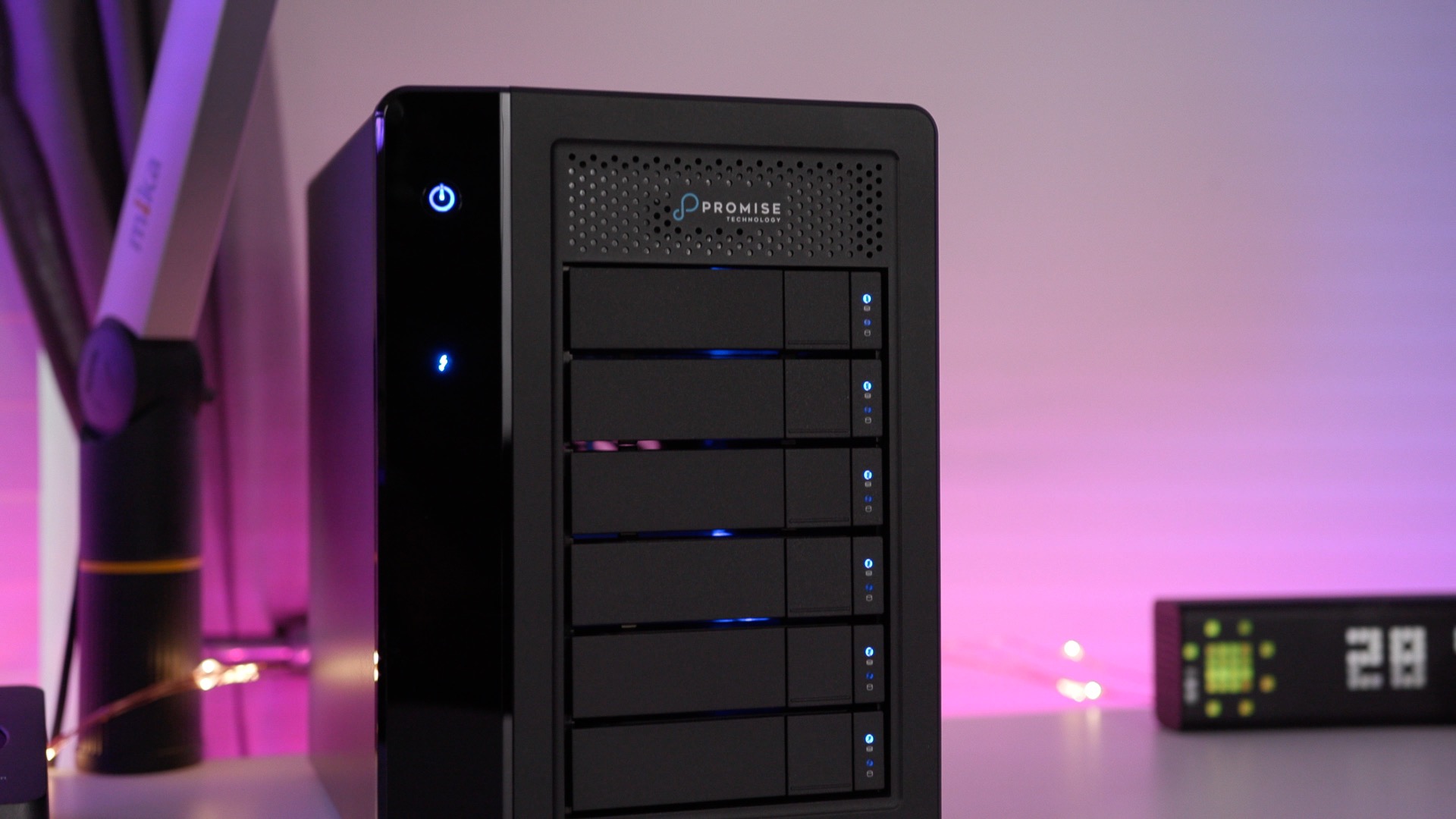 Why would a person consider a NAS over a DAS for working with Final Cut Pro X? Here are a few reasons that I’ve come up with: 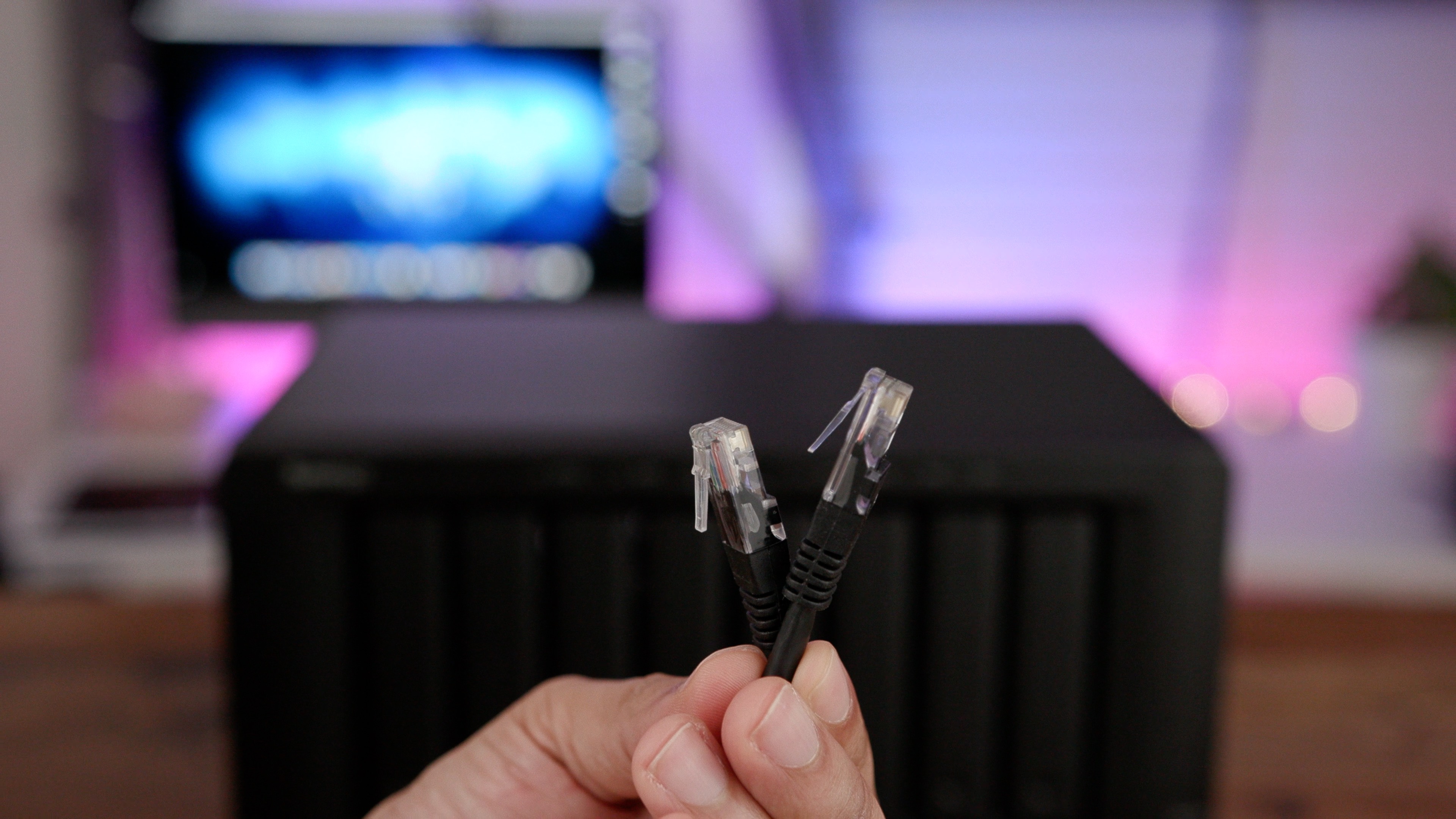 Why a NAS may still be a bad choice

It took a while for me to decide on which Synology NAS to pair with my iMac Pro. Some of the newer, more powerful models, like the 8-bay DS1817+ feature faster processors, and niceties like expandable PCIe storage. 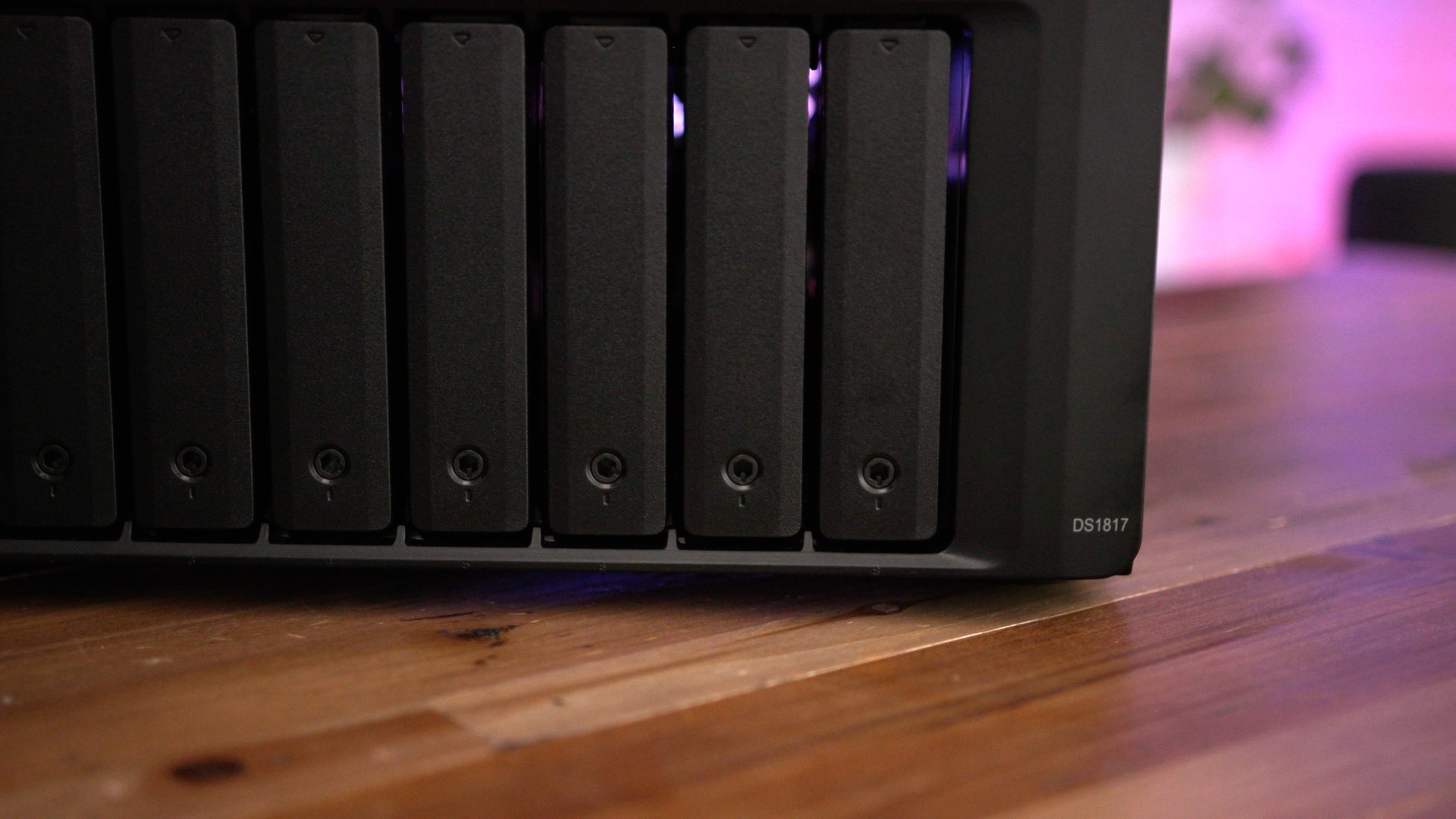 One particular model, the regular DS1817, stood out to me. It lacked the faster processor and PCIe expansion, but its inclusion of a built-in dual 10GbE NIC was enough to convince me to pair it with my iMac Pro. Because I won’t be doing much intense processing on the NAS itself, the Quad-core 1.7GHz CPU and 4GB of RAM was enough for my needs.

I used the following disk configuration with the Synology DS1817

I have the four 10 TB HDDs configured with SHR (Synology Hybrid RAID) as a single volume. This volume contains several shared folders to house all of my data. 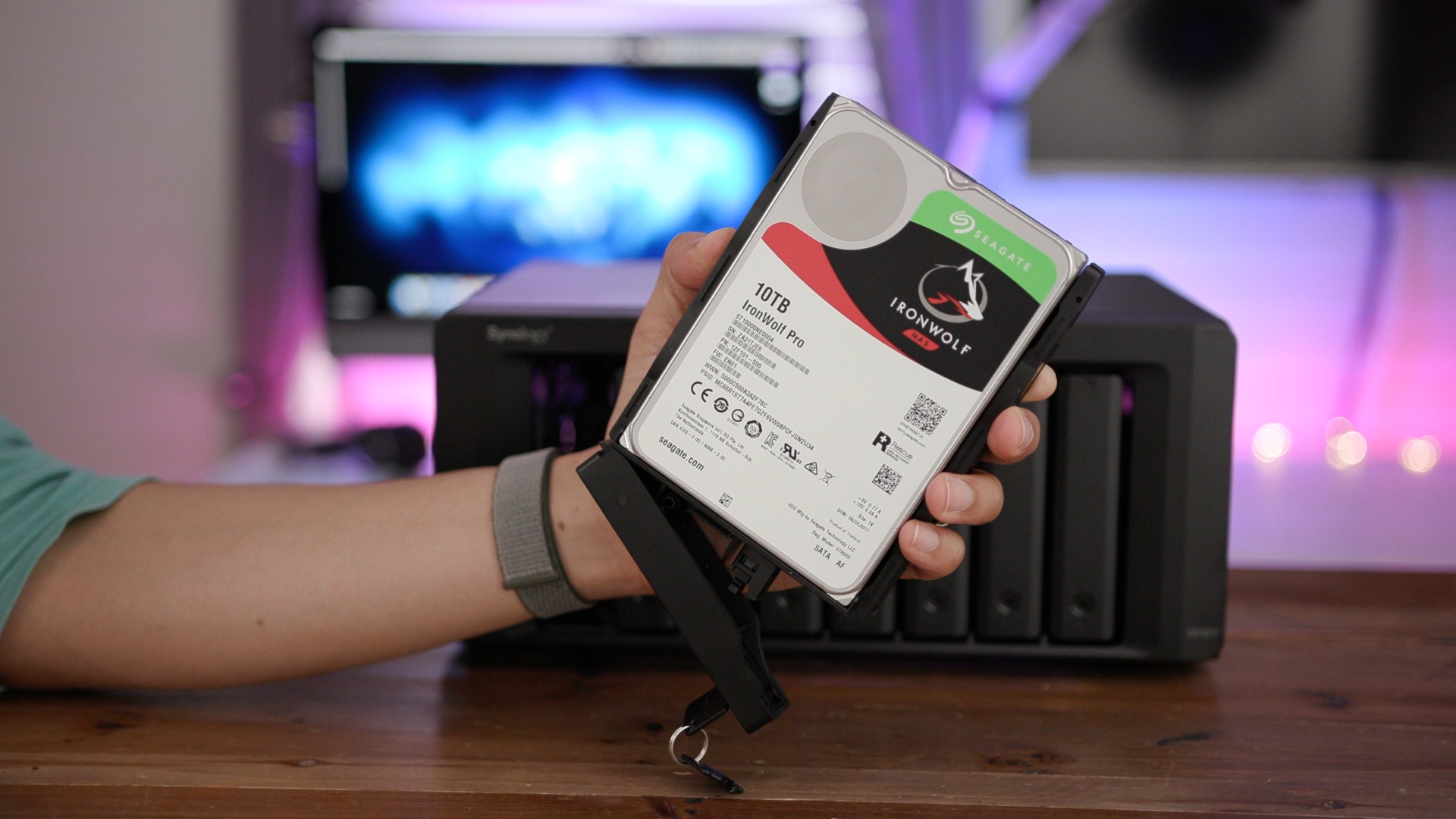 In order to store and access Final Cut Pro X libraries on an external NAS location, you’ll need to employ the use of SMB or NFS. Performance via SMB wasn’t anywhere near what you’d get with today’s modern Thunderbolt 3-enabled direct attach storage solutions, but it’s still good enough for many video workflows. 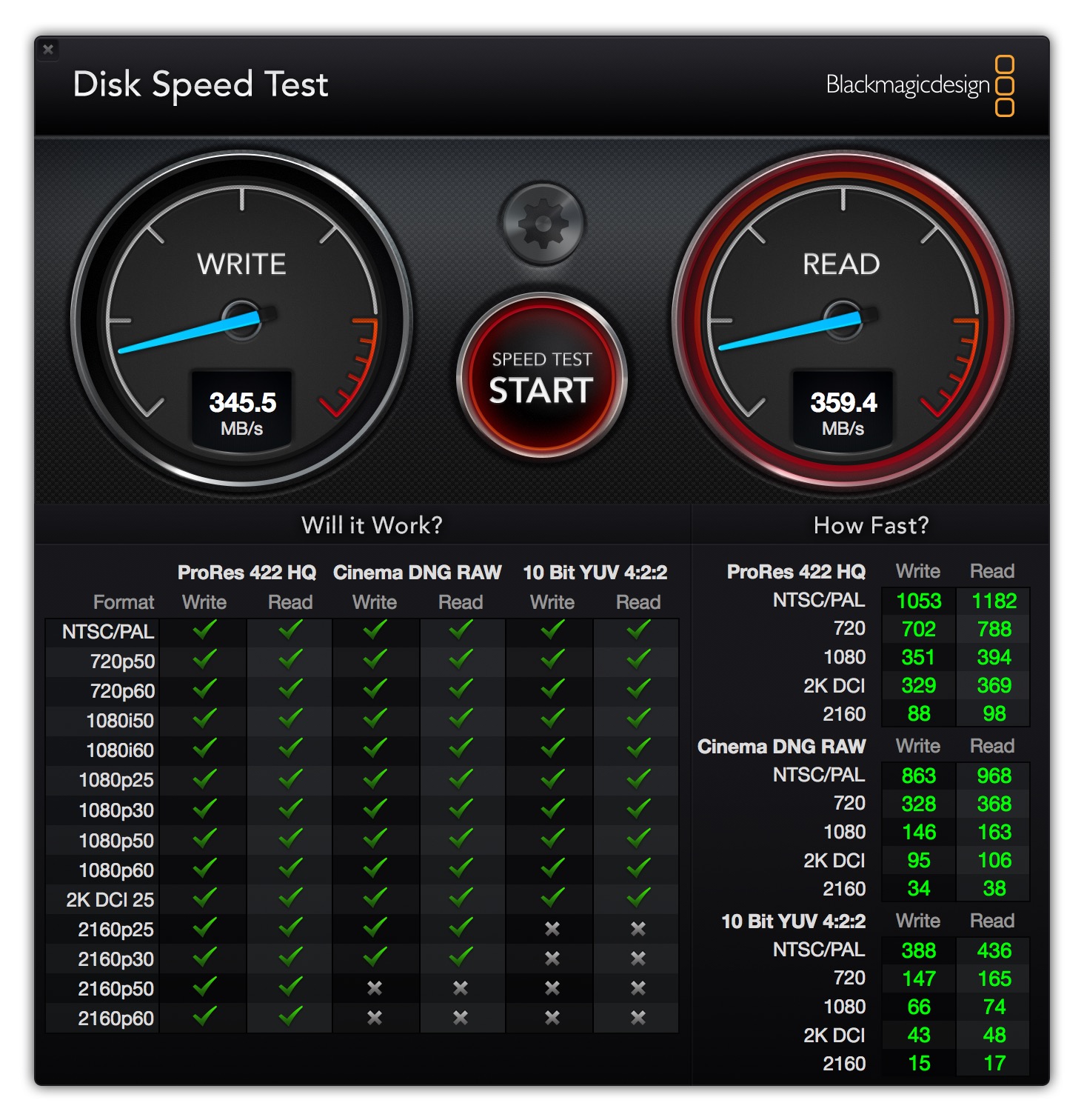 Obviously,  the speed is nothing to write home about, but the bandwidth is enough to accommodate some 4K workflows. Write speed equates to nearly 3Gb/s, and read speed over 3Gb/s. Neither the read or write speeds could be accomplished with a normal Gigabit Ethernet connection.

That said, there is room for improved network protocol performance, and hopefully Apple will continue to improve Final Cut Pro X with this type of use case in mind.

To take advantage of this setup, you’ll need an iMac Pro or other Mac with 10GbE available. Obviously the iMac Pro makes this easy since it has 10GbE built in. There are 10GbE adapters that you can purchase for the MacBook Pro. For example, Sonnet Technologies makes a Thunderbolt 3 to 10GbE adapter that you can use.

As mentioned, my DS1817 setup includes four 10 TB Seagate IronWolf HDDs in an SHR volume with 1 disk fault tolerance. The total amount of available space for this volume is just a hair over 27 Terabytes. 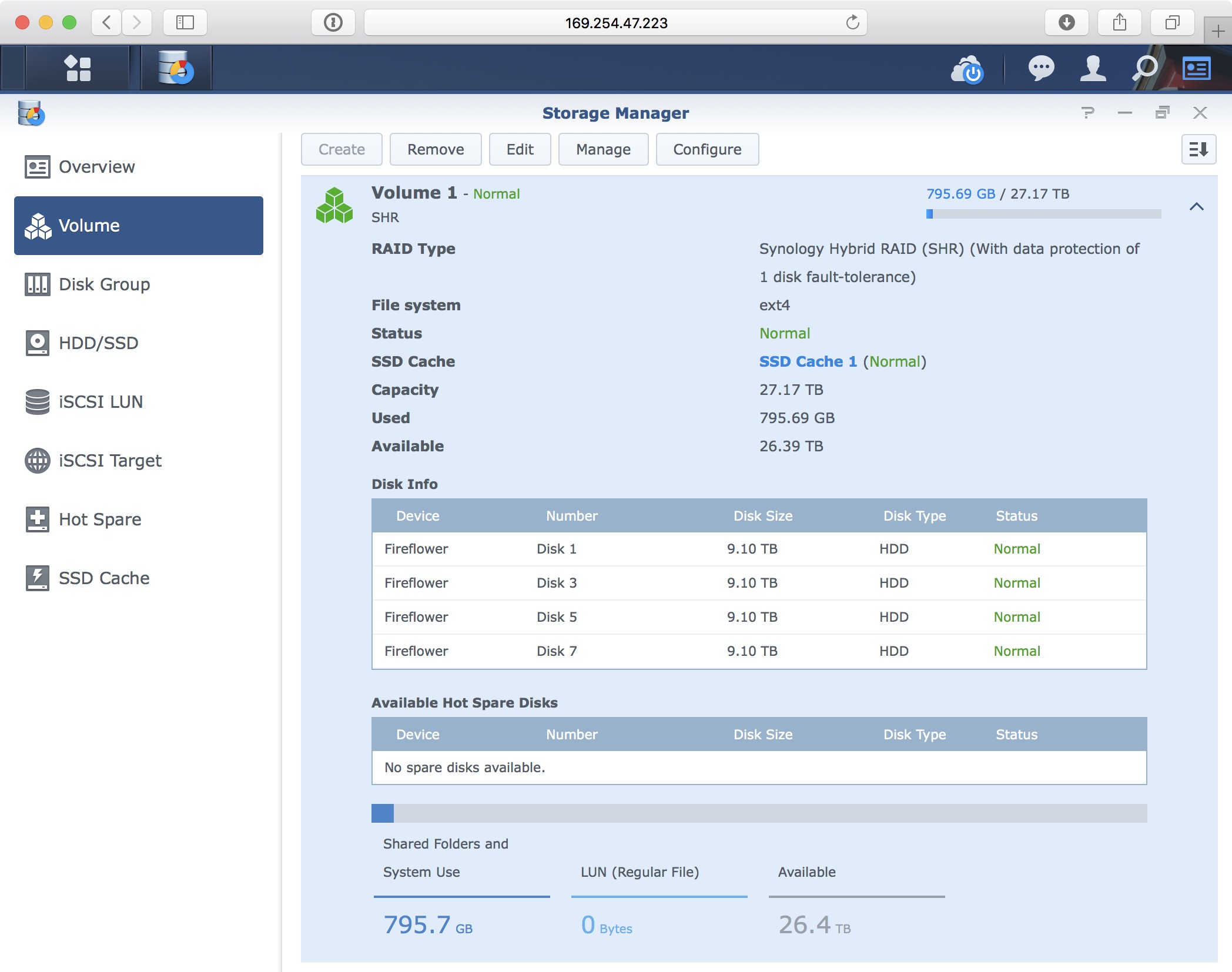 Here on the Storage Manager Overview page, you can better see how I have the DS1817 configured in relation to disks volumes. 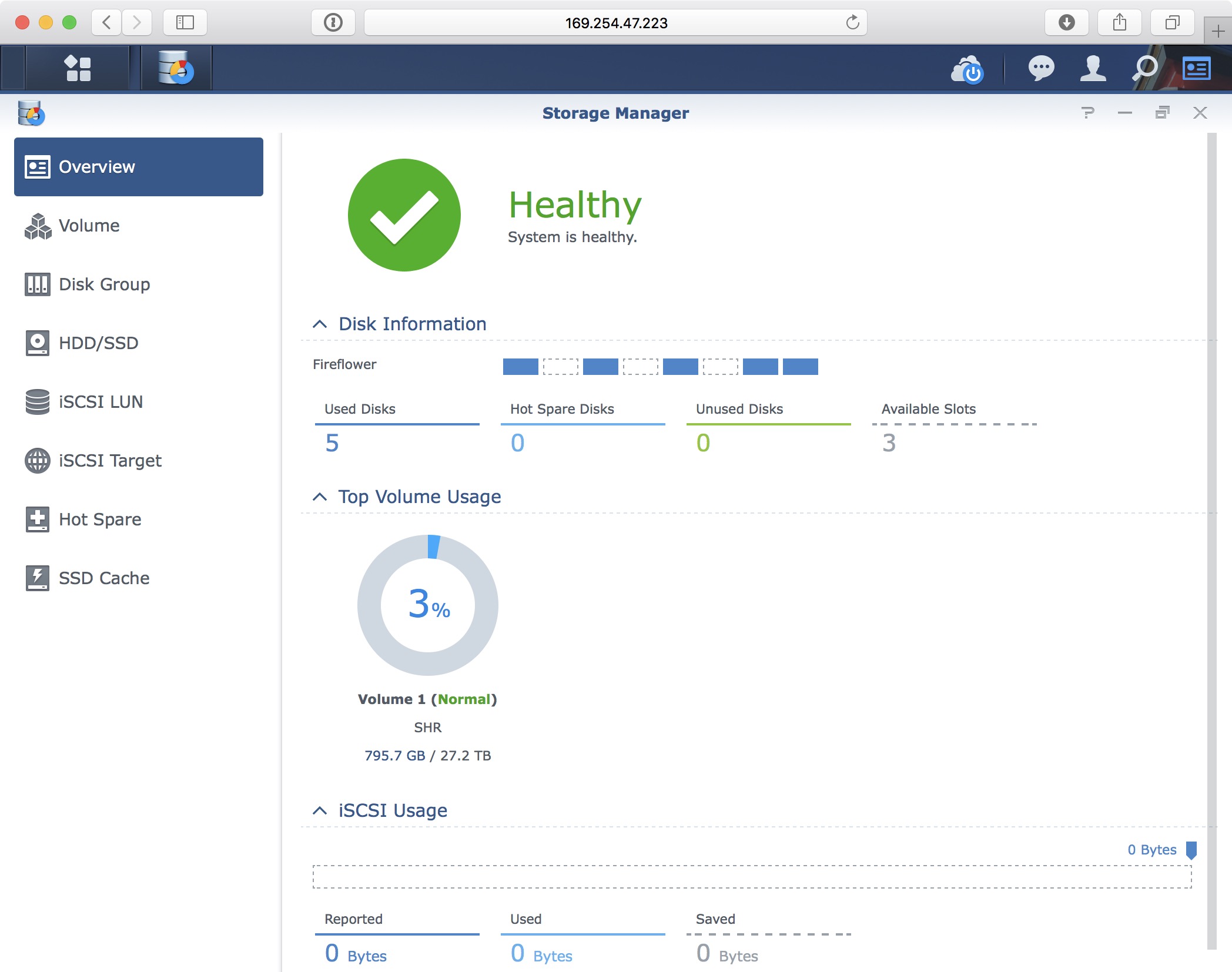 Under the File Services section in control panel, I’ve enabled SMB and have disabled all other network protocols like NFS and AFP. If you opt to use SMB, be sure that you follow this guide to improve performance. 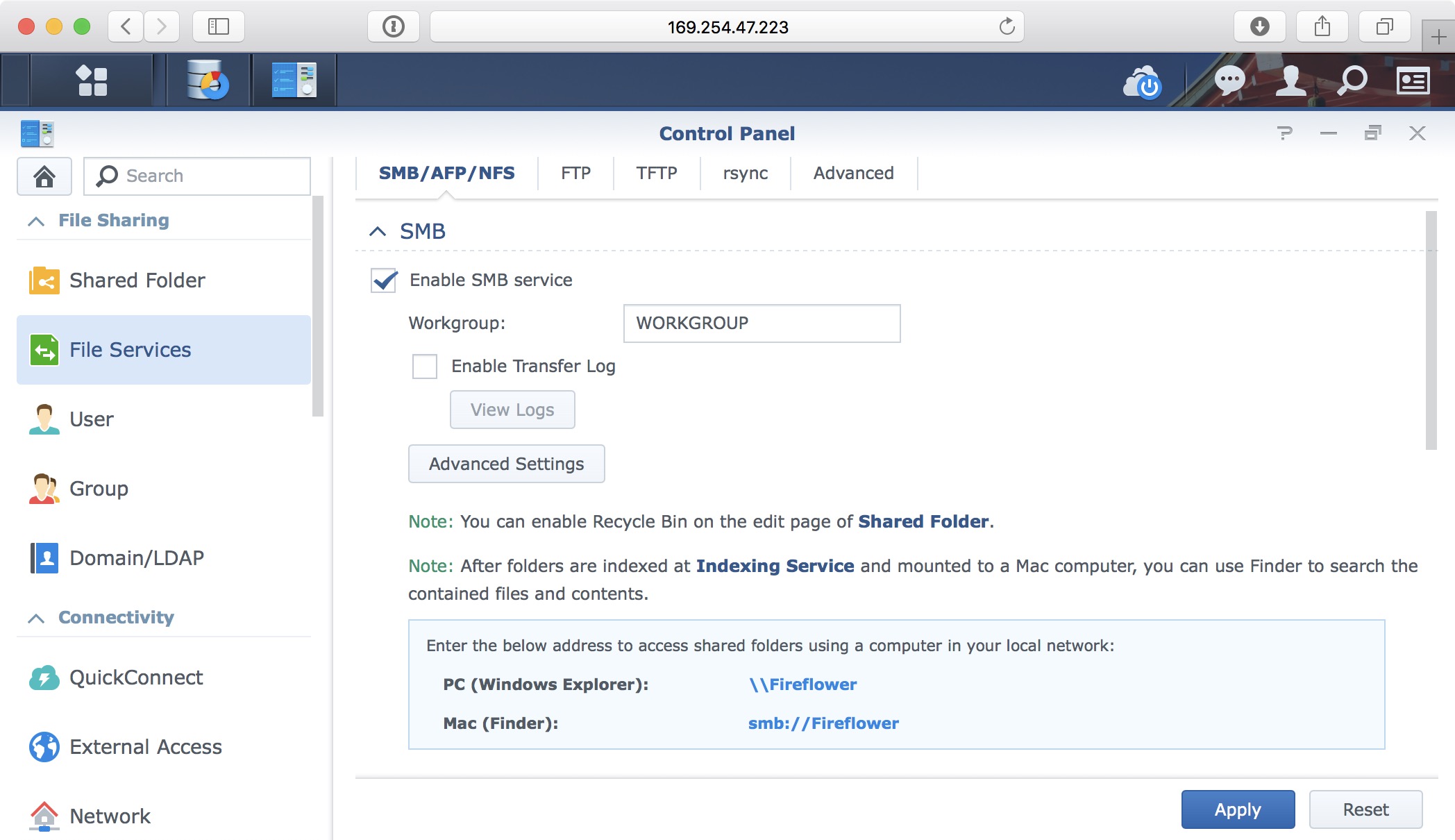 Once all of the basic configuration bases are covered, it’s really just a matter of implementing the workflow in your editing routine.

My workflow is fairly simple and straightforward. I’ve created three essential shared folders on my NAS to help with organization: 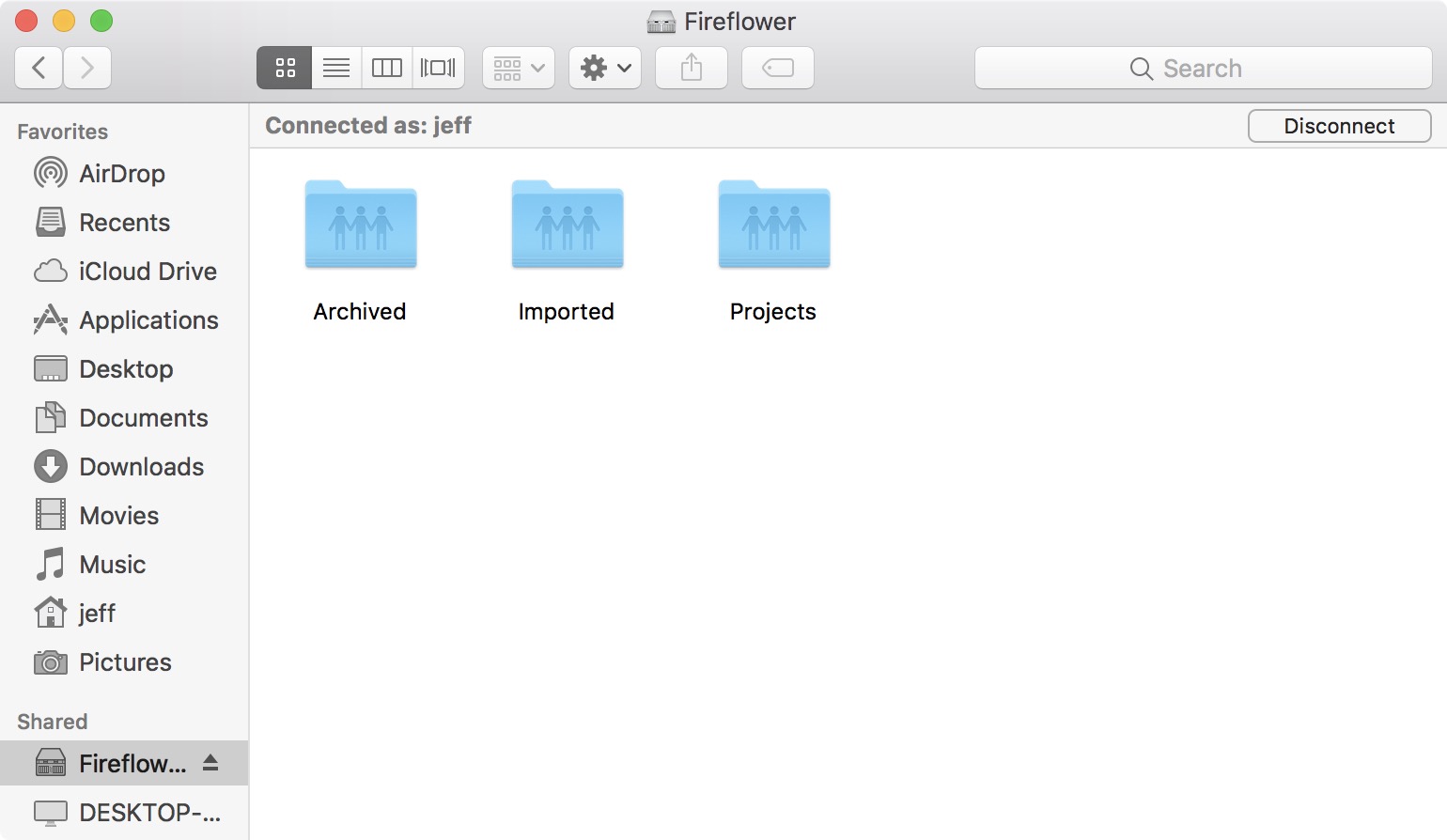 The Archived folder is where I keep all of my final projects that are exported for upload to the web. If I ever need to go back and reference a video, or include a clip of an older video in a project that I’m working on, this is where I go to retrieve it. 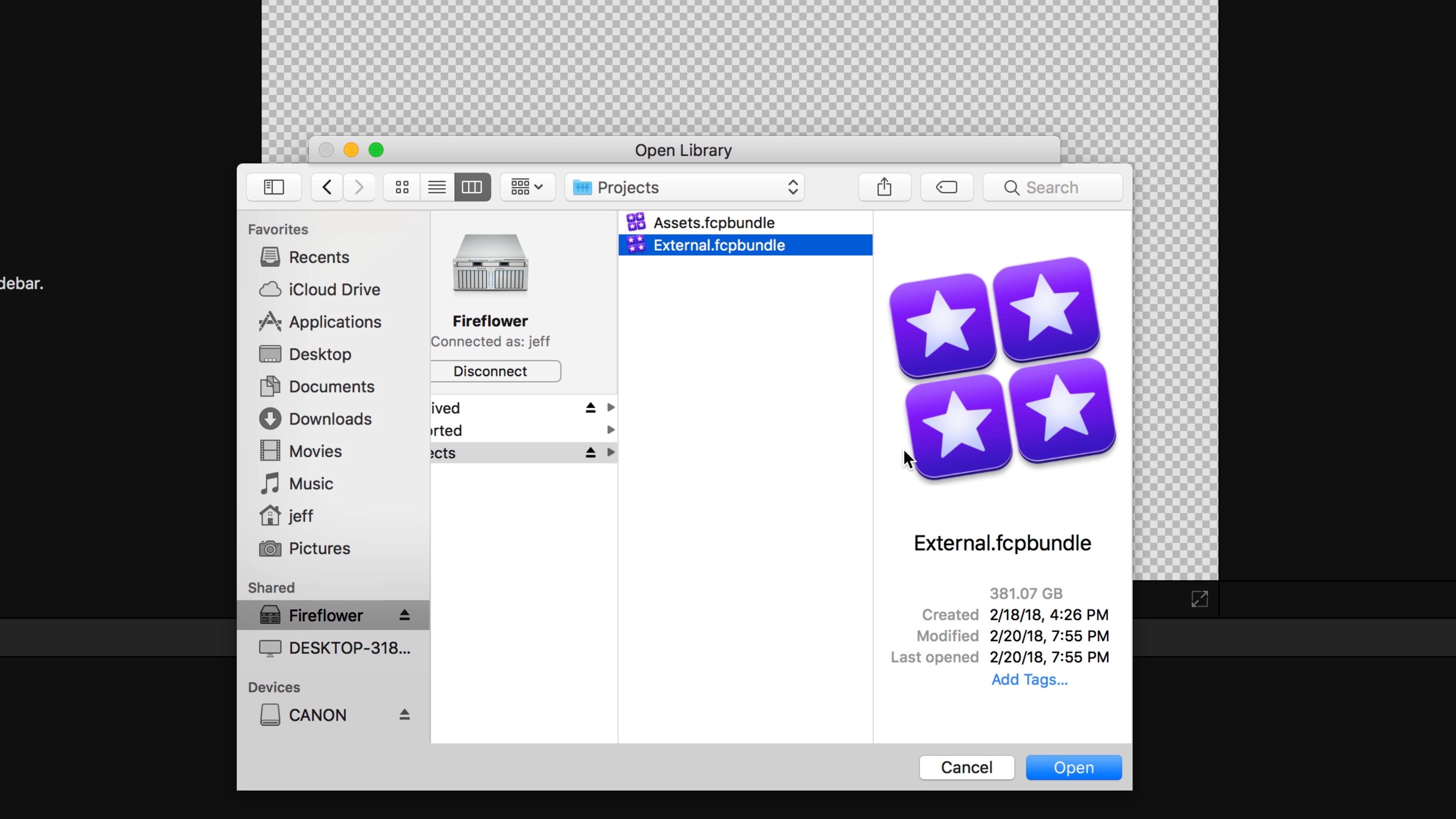 The next folder in my workflow is called Imported. Here is where I import and store individual videos clips and/or entire SD Cards for future use. Final Cut Pro X includes an often overlooked archive feature that essentially lets you mirror an entire SD Card and save it to a disk location. This allows users to retain the benefits associated with importing from a camera archive, such as the ability to set in and out points and import specific footage into an event. 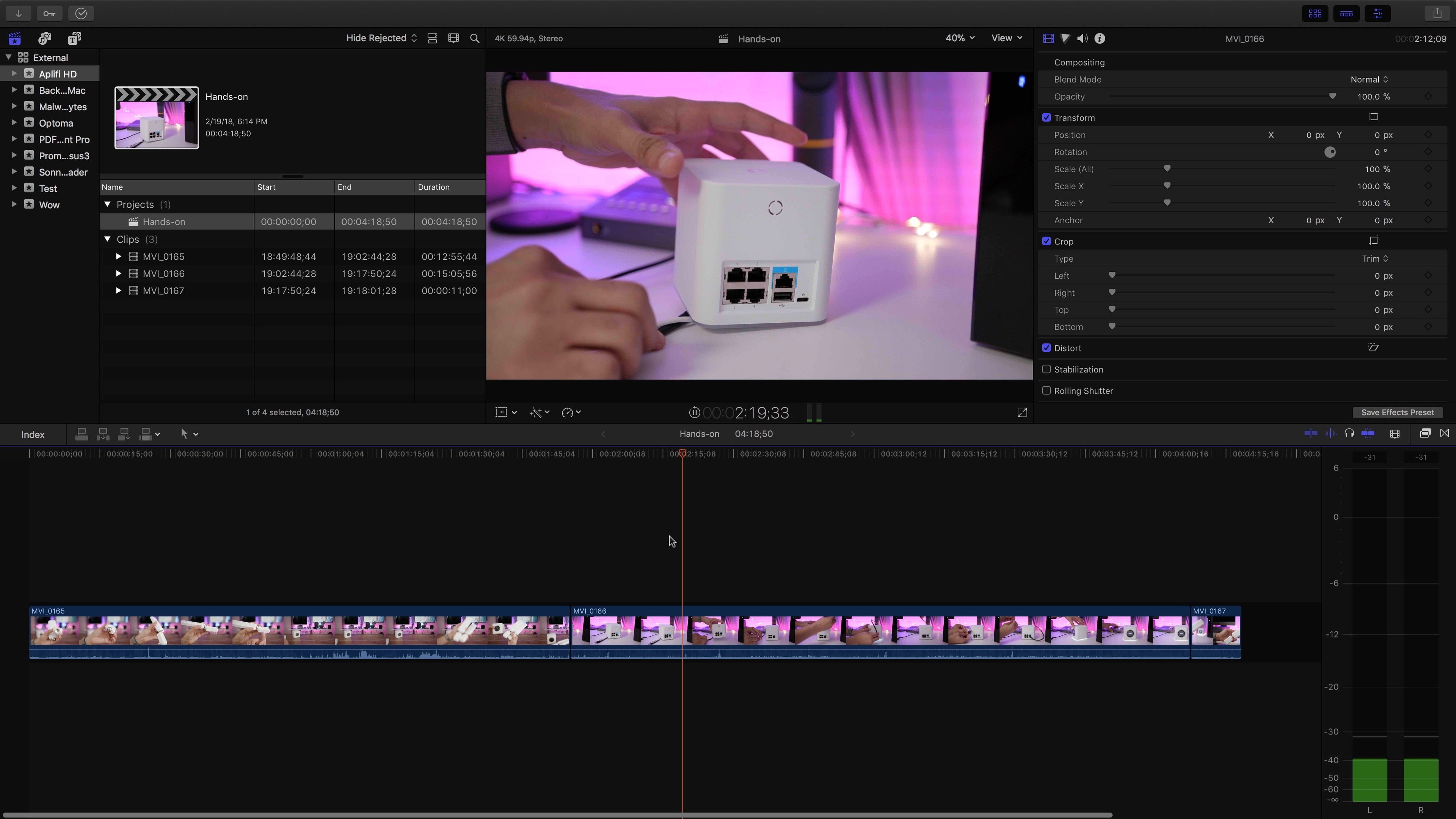 My Projects folder is the location where my in-progress projects are stored. When I’m working on a project, I can easily import footage from the Imported or Archived folders, and when I’m finished with a project, I export that footage to the Archived folder. This approach allows me to stay organized while working on multiple projects simultaneously.

The reasons why I like this setup, as I’ve outlined throughout this post, are multifaceted. I appreciate that I can put this NAS anywhere, even in another room, and still be able to have speeds that are fast enough to work with Final Cut Pro X. I also like that fact that even if the NAS is in the same general working area, I can control fan speed at my leisure to help keep noise down.

I still think that a dedicated direct attached storage solution is the best solution for individuals due to its performance and ease of use, but using a NAS with 10GbE adds an interesting new option to the mix for Mac users with available 10GbE connectivity. As Final Cut Pro X continues to evolve, such a solution may be especially interesting for teams in shared space locations.

What do you currently use as a Final Cut Pro X storage solution? Sound off in the comments below with your thoughts and ideas.