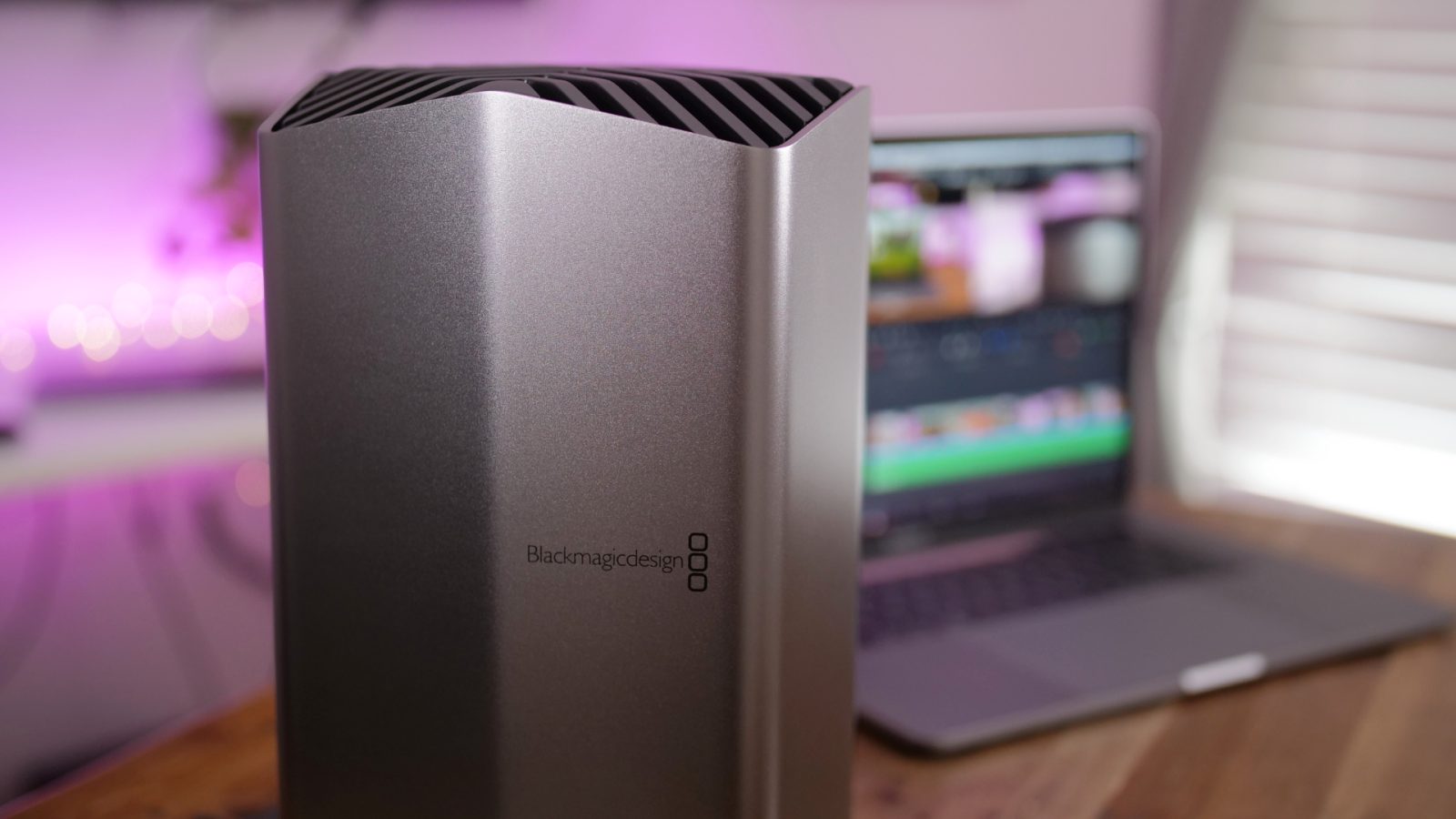 The release, which was delayed from its original late-November scheduled launch, is the follow-up to the original Blackmagic eGPU (review). The upgraded ‘Pro’ version features additional I/O and a much more capable RX Vega 56 graphics card inside.

The Pro version of the Blackmagic eGPU is a much more appealing device than the original, because it features a RX Vega 56 GPU inside instead of the middling Radeon Pro 560. The Vega 56 GPU is the same GPU found in the base model iMac Pro, and it provides a healthy dose of graphics processing power to Mac users.

One of the best things about Blackmagic’s eGPU units is that they’re virtually silent, even when under load. You can’t say the same for other eGPU chassis’ on the market, and it’s one of Blackmagic’s strongest selling points. I’ve yet to test the eGPU Pro to see if it follows in the footsteps of the original version, but I’d be surprised if Blackmagic deviated from this design, as it’s one of the main qualities that separates it from the competition.

The new Blackmagic eGPU Pro also comes with an additional I/O option that was conspicuously missing from the original model — DisplayPort connectivity. This will allow the Blackmagic eGPU Pro to connect to higher resolution displays at native resolution, like the LG UltraWide 5K2K display that we just reviewed. 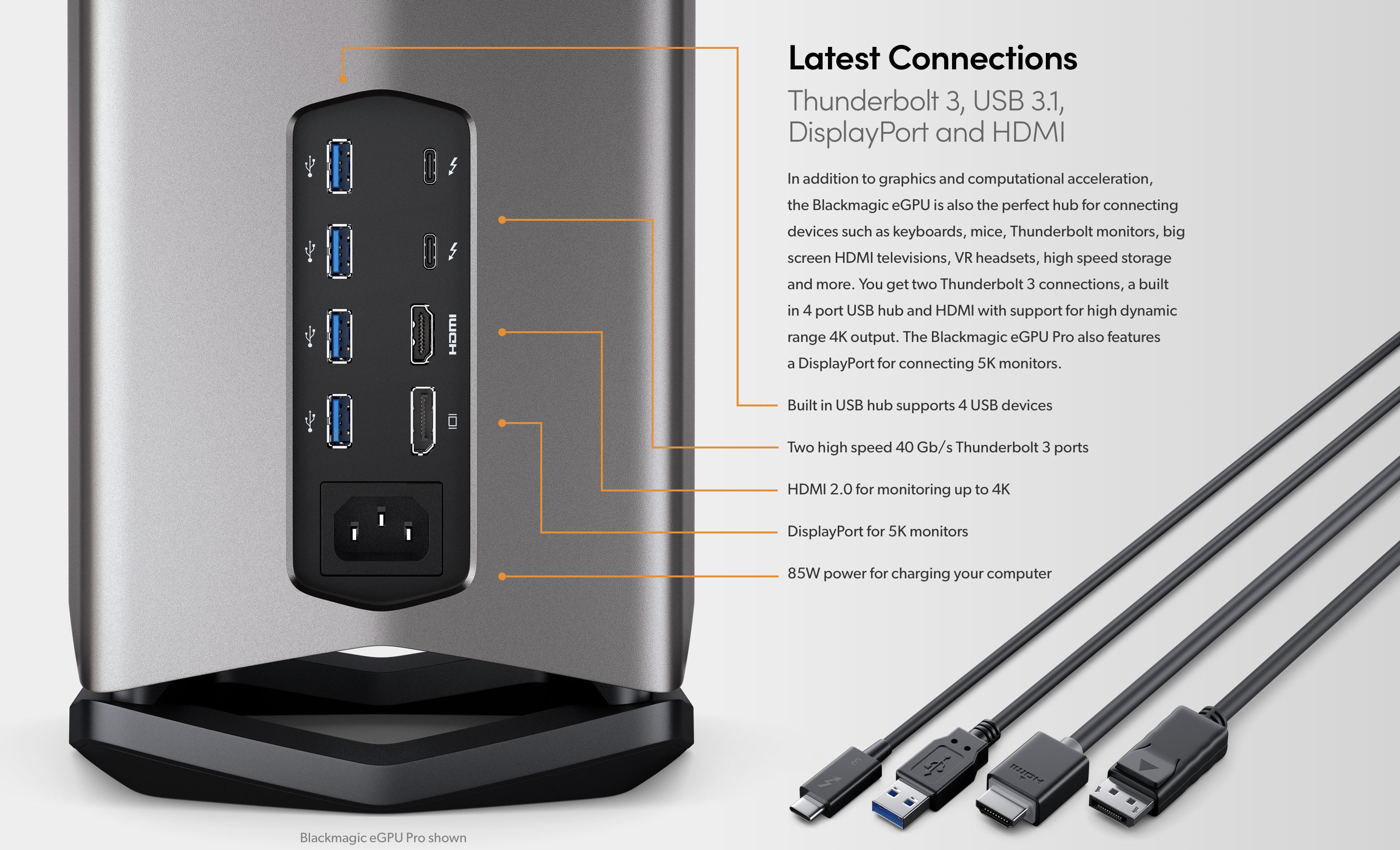 Same looks as the original, but with the addition of DisplayPort for 5K displays

For MacBook Pro and MacBook Air users, the Blackmagic eGPU Pro, like its predecessor, supports power delivery via the Thunderbolt 3 connection. The unit provides full speed charging to any Thunderbolt 3-enabled laptop in Apple’s lineup.

Everything else, at least what we can observe from the photos and specifications, seems similar to the first Blackmagic eGPU. Thus, you can expect a well-designed, beautiful external aluminum chassis that produces minimal heat and noise.

Why consider an eGPU?

eGPUs can be handy additions to any Thunderbolt 3-enabled Mac. In fact, all of the following Macs support eGPUs as long as you’re updated to the latest version of macOS Mojave.

Apple did a great job incorporating eGPU connectivity in macOS Mojave. All you need to do is connect the eGPU, and it’s instantly configured. Apple even makes it possible to assign eGPU acceleration on an app-by-app basis, making it possible to accelerate apps, like Final Cut Pro X, with an eGPU even if the chassis isn’t driving the primary display. 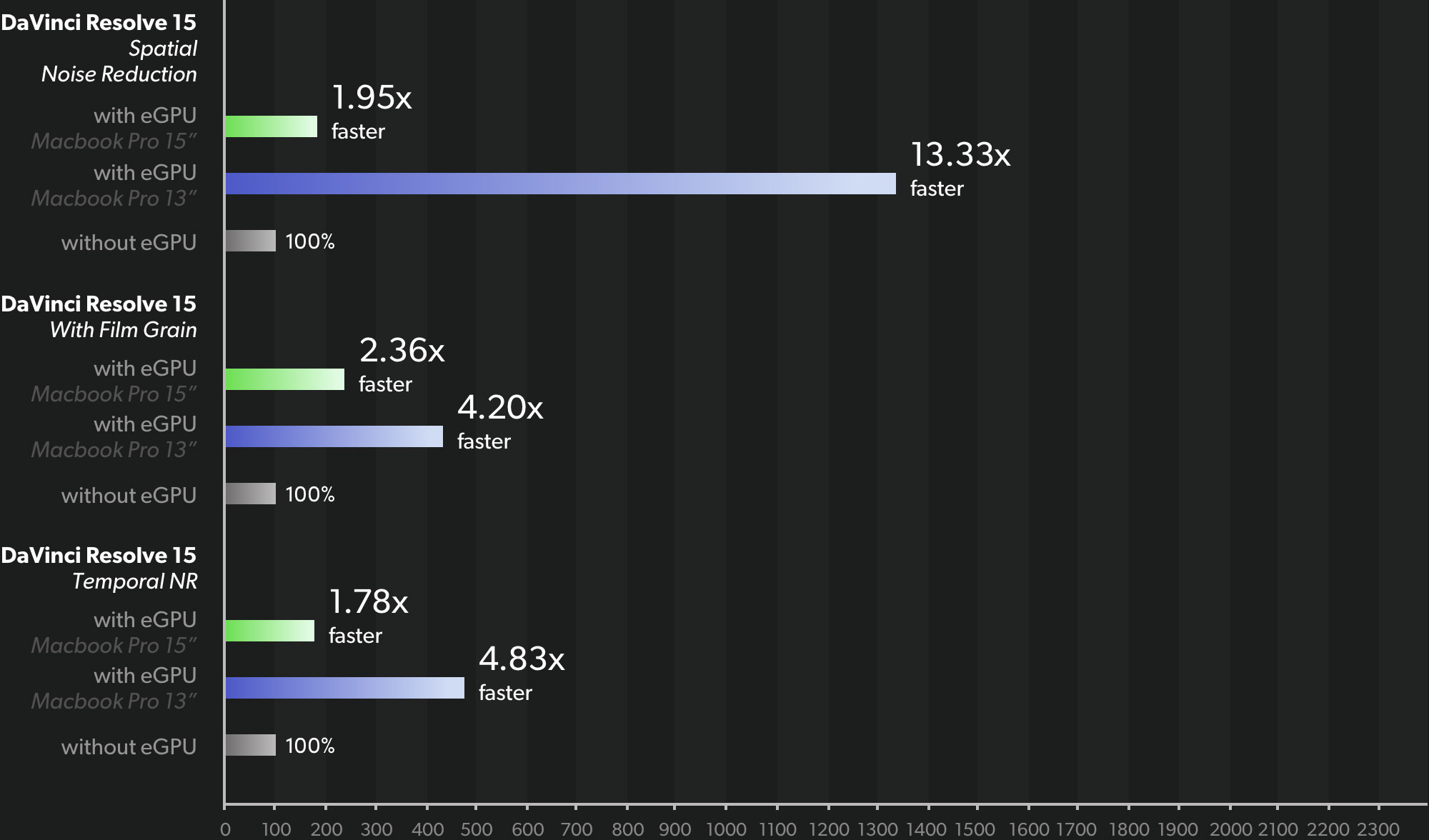 As we noted in previous posts, it’s even possible, with certain apps, to wield multiple eGPUs connected to the same Mac. For example, DaVinci Resolve Studio supports multiple eGPU acceleration, and it can make a notable difference depending on your workflow.

eGPU support in macOS is still in its infancy, but the situation looks quite promising for pro users, especially when compared to the climate just a few years ago. Be sure to watch Back to the Mac episode number 8 for a good overview on eGPUs and how to use them.

Not a very good value

And like the first iteration, the Blackmagic eGPU Pro comes in a non-upgradable package. In other words, you can’t upgrade to a more powerful GPU in the future should such a need arise.

With an upgradable chassis, you give up the beautiful design and silence, but it’s a much better up front and long term value proposition. However, if silence is of upmost importance to you, there’s nothing else out there that can compete with Blackmagic’s eGPU products, so you’ll just have to live with the cost premium.

We’ll be back with more coverage of the Blackmagic eGPU Pro in the future. If you’re interested in a hands-on comparison/review, let us know down below in the comments section.