Back to the Mac 011: Are longer Thunderbolt 3 cables slower? [Video] 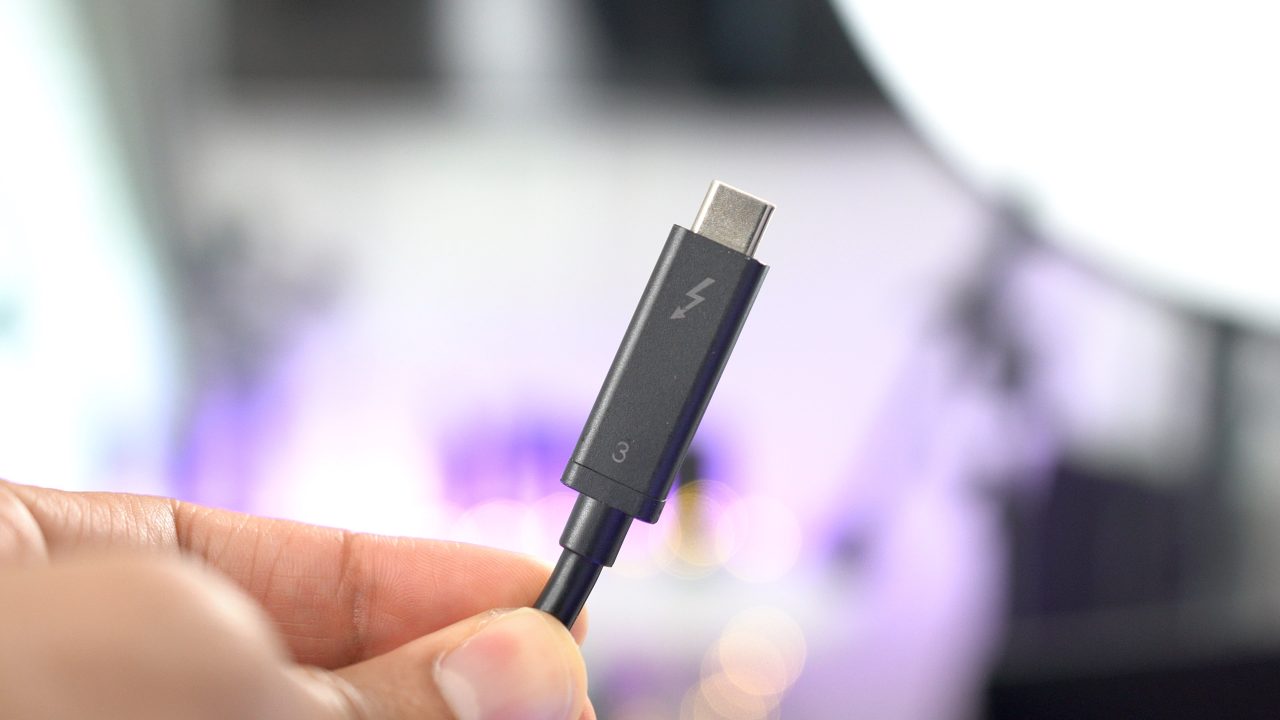 Whenever I complain about how companies tend to ship 0.5-meter cables with their Thunderbolt 3-enabled products, I sometimes encounter pushback reminding me that longer cables noticeably hinder performance. But is that really the case?

The answer to that question is yes…and no. That’s because it all depends on the type of cables that you’re using.

There are two basic types of Thunderbolt 3 cables: active, and passive cables.

If you want a longer Thunderbolt 3 cable while retaining full 40 Gbps connectivity, you’ll need to spring for an active cable, such as this one from CalDigit. Active cables contain transceivers in the plugs that regulate data transfer, these transceivers provide the necessary stability over longer lengths. 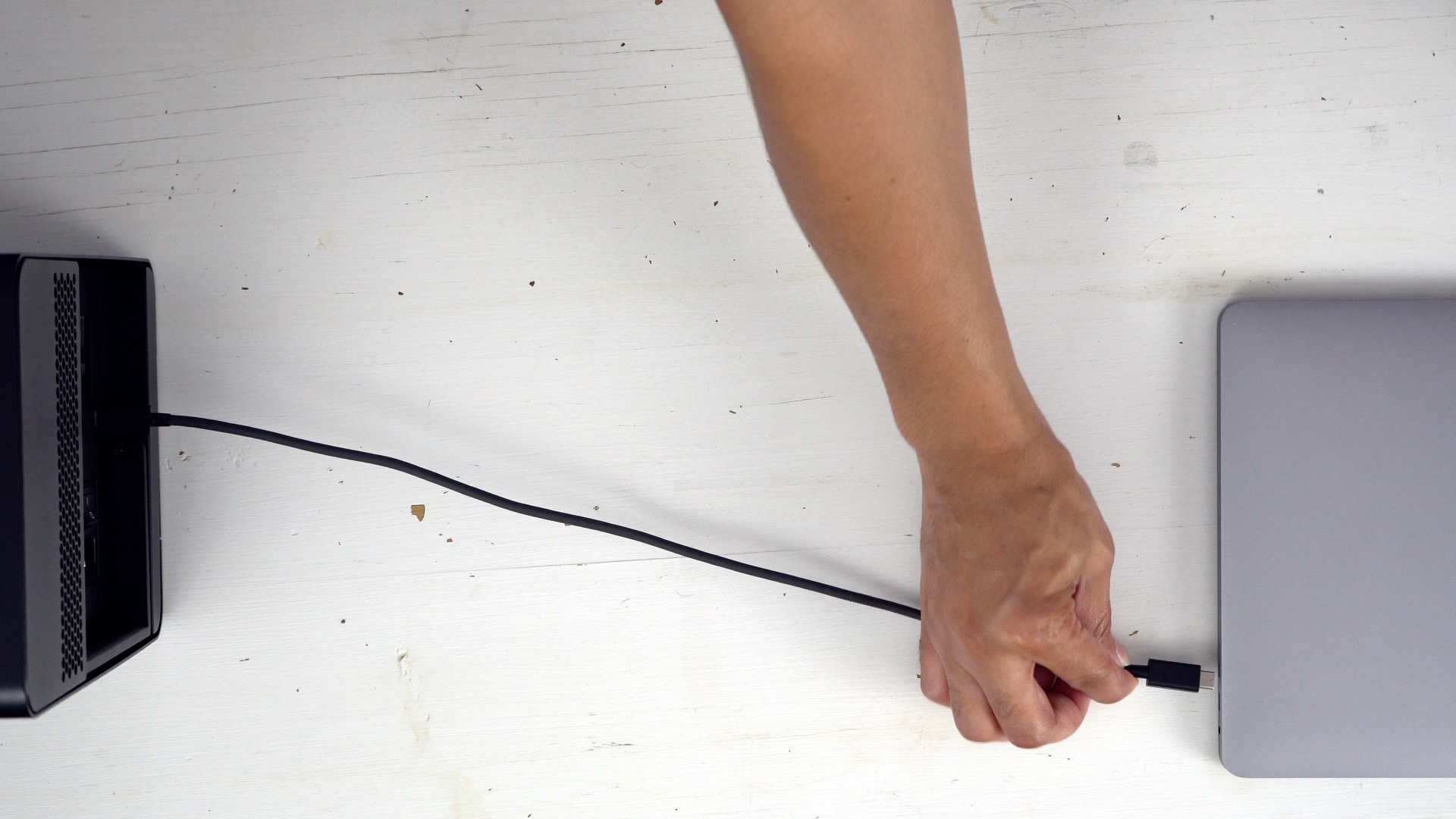 Although the extra length is great, active cables feature a couple of obvious caveats. For starters, active cables are more expensive, which is probably one of the reasons why companies tend to bundle shorter, passive cables with their Thunderbolt 3 products.

Another issue with active cables is that they lack backwards compatibility with USB 3.x. If you try to connect an active Thunderbolt 3 cable to a USB 3.x peripheral, you’ll notice its connection falls back to USB 2.0 speeds, which is a super slow 480 Mb/s. 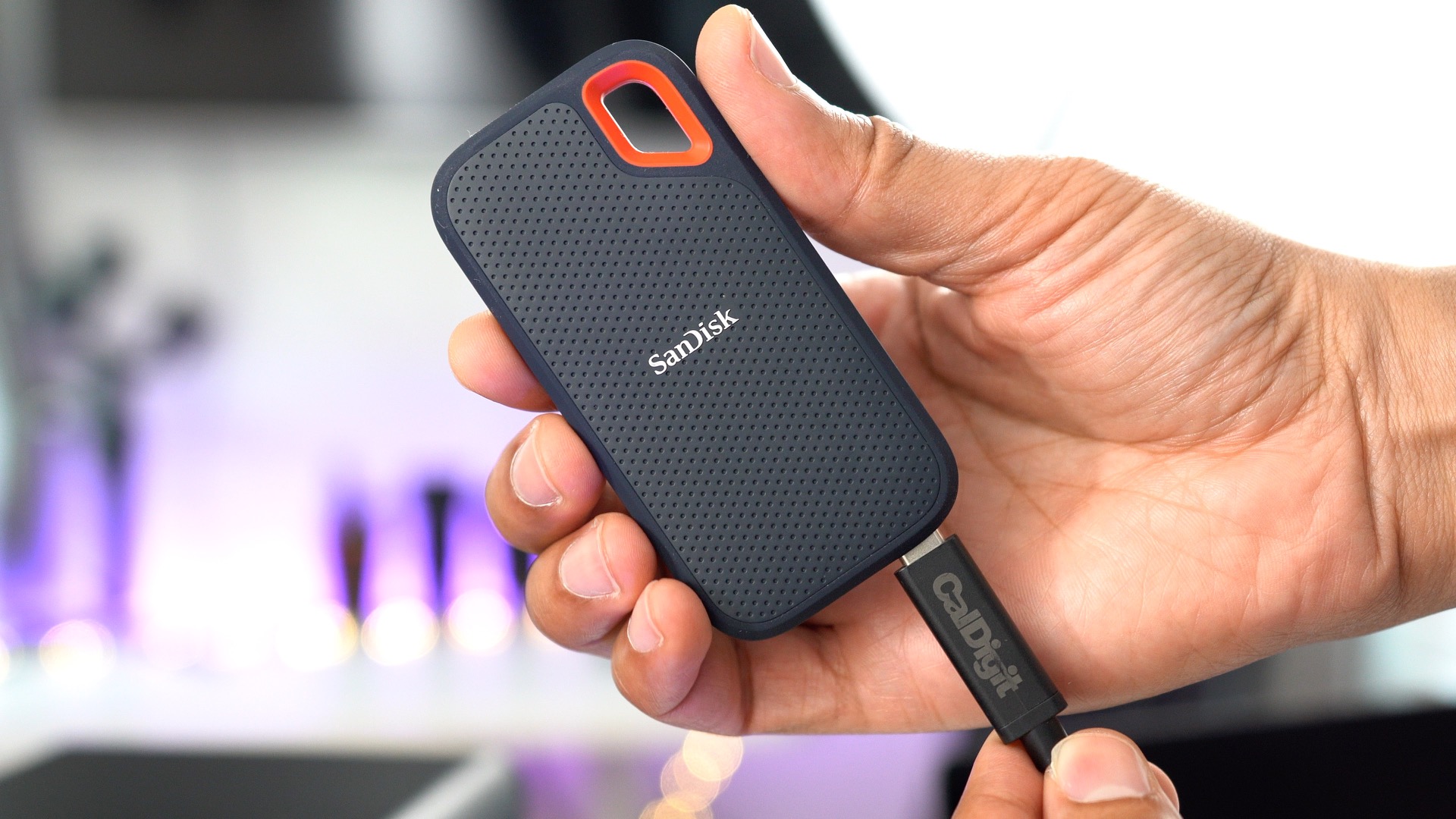 But even with the extra cost, and the lack of USB 3.x support, I love the flexibility that active cables bring to the table. 0.5-meter passive cables (roughly 1.5-feet) are much too short for many scenarios and setups. For example, I don’t want to have to place my eGPU right next to my MacBook Pro in order to use it. A longer 2-meter active cable can be more convenient, but a lot will depend on the type of Thunderbolt 3 devices that you use, along with your desk layout. 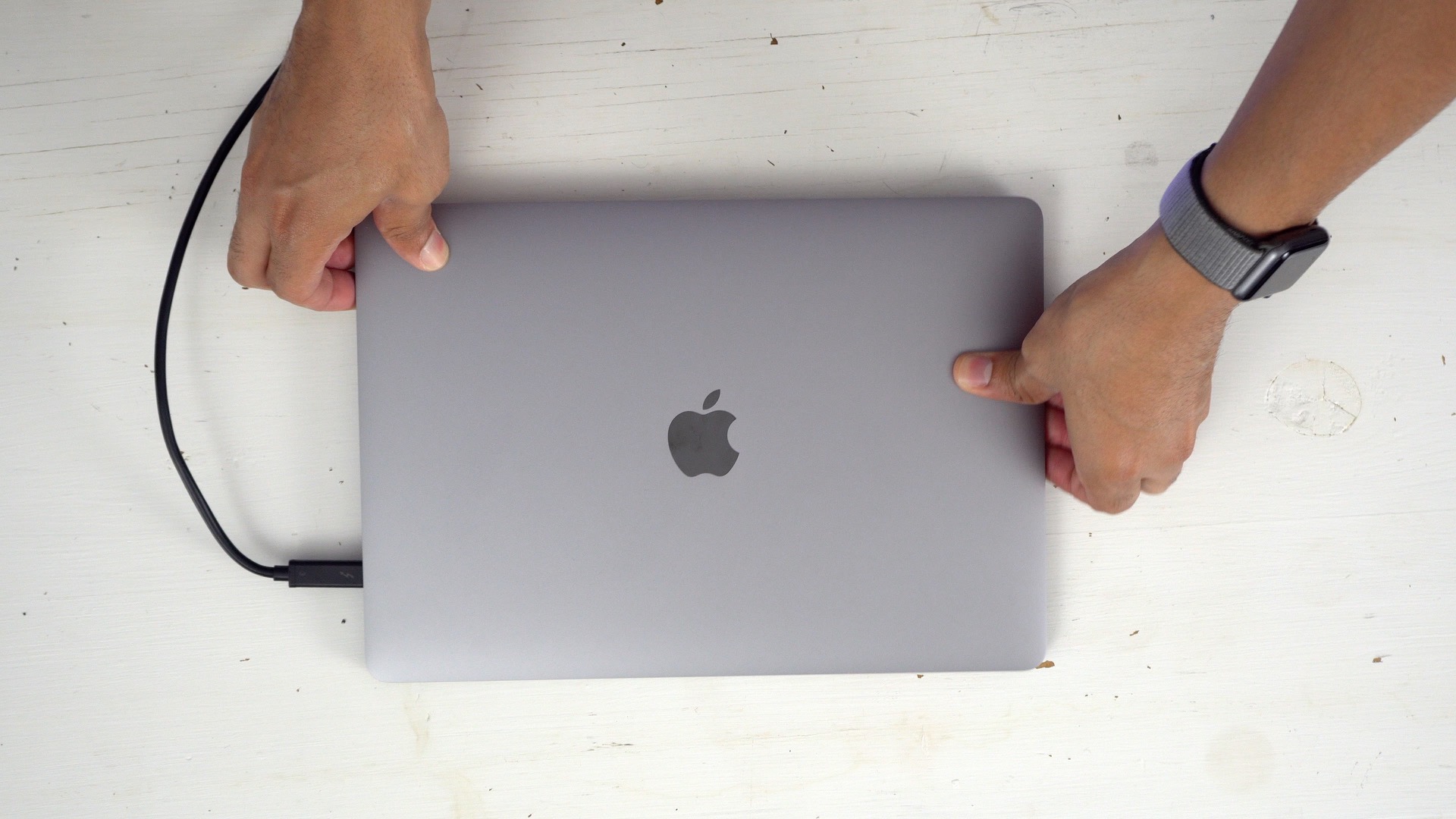 But here’s the important question: is a 0.5 meter passive cable noticeably faster than a 2-meter active cable? 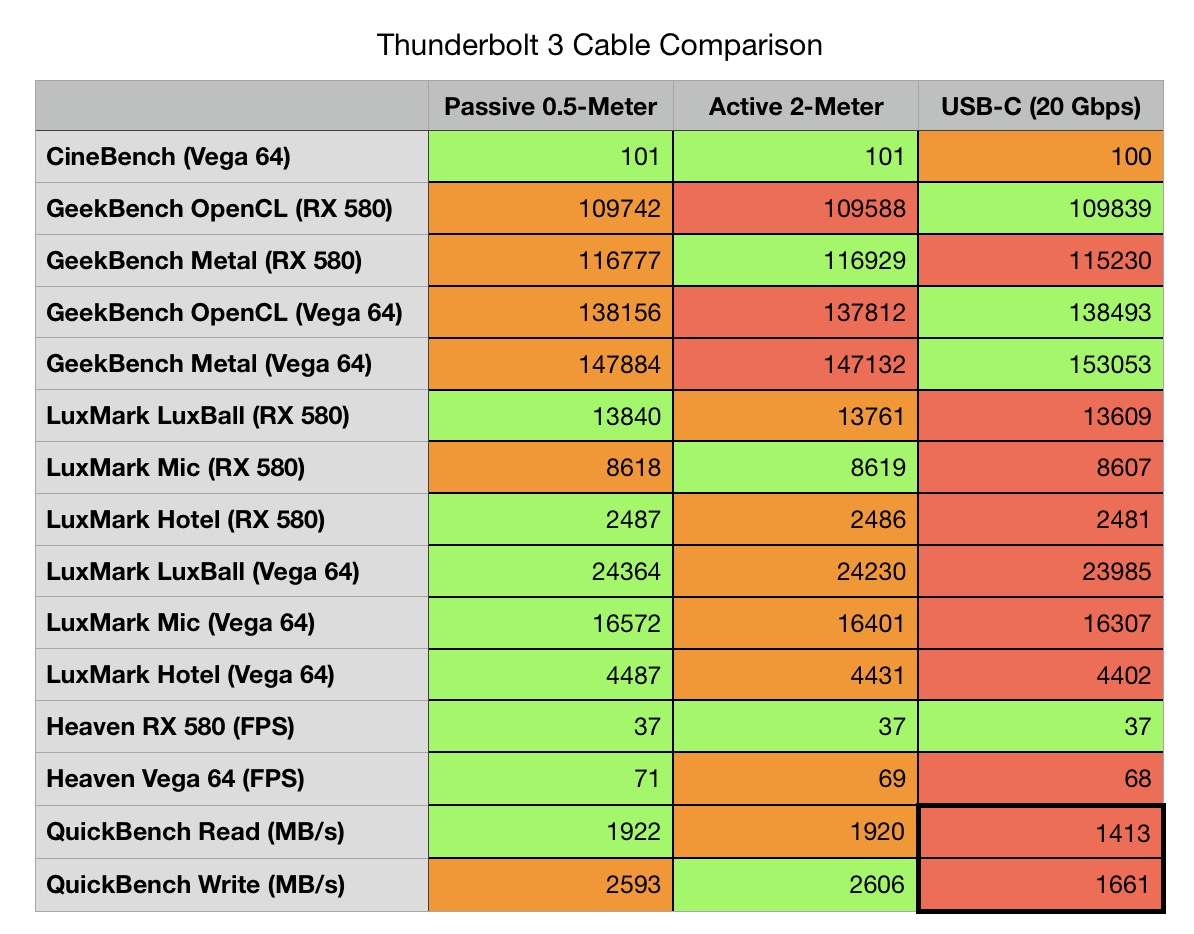 I ran each of the tests five times, I then dropped the high and low results and took the average of the remaining three. After comparing the results, I found that the passive cable performed “better” across most tests, but the differences were usually so small that it would be indiscernible in general real world usage. 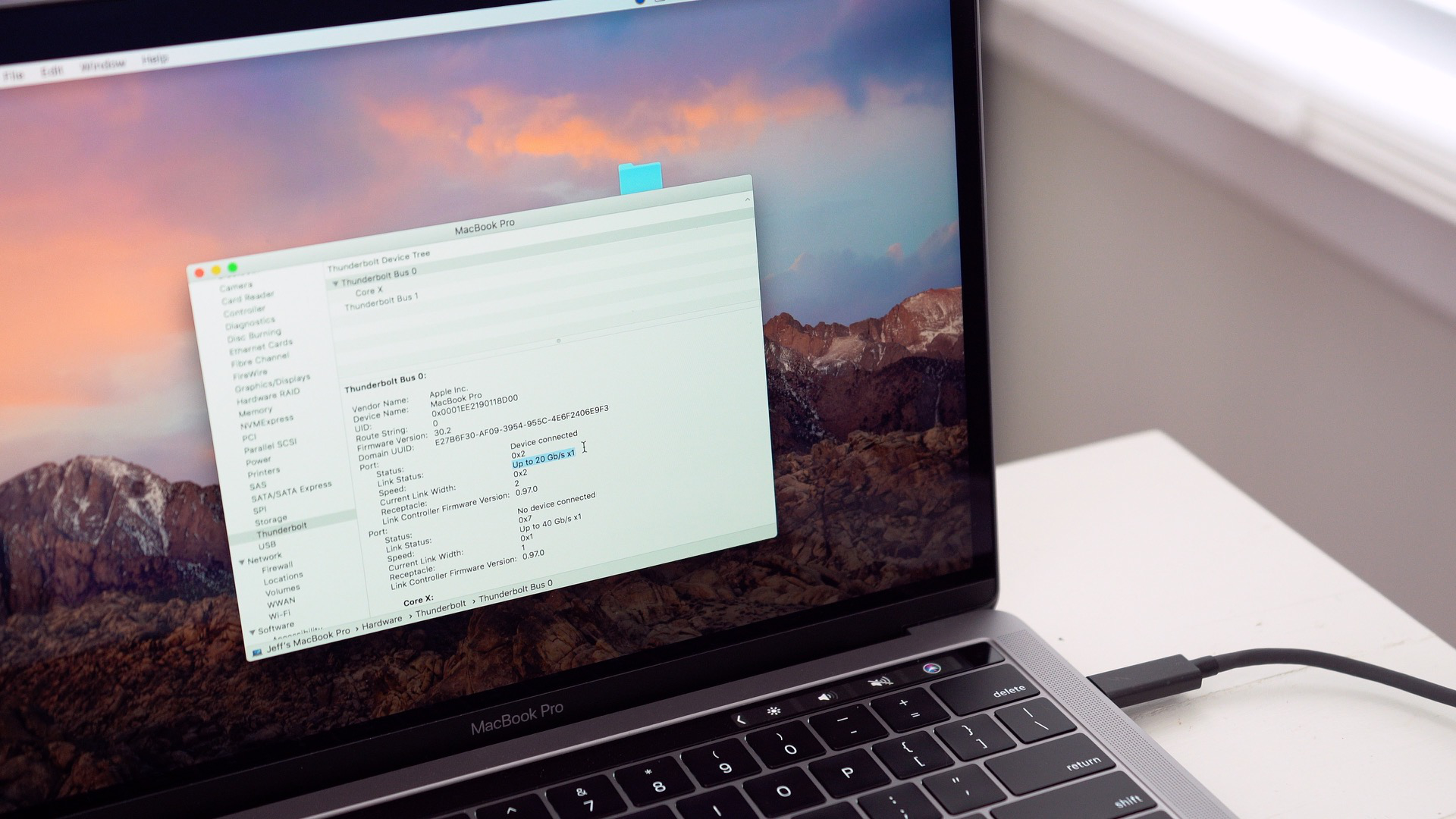 Even the cable connecting at 20 Gbps, which is what passive cables connect at longer lengths, performed well in most tests. The 20 Gbps connection was exposed, however, when running disk speed tests on a RAID-enabled SSD enclosure. Here, the extra bandwidth afforded by short passive cables and longer active cables made a considerable difference.

Keep in mind that power delivery is yet another facet about these cables that you’ll need to consider. Some cables support the maximum 100W provided by the USB Power Delivery spec, but not all cables do. You’ll need to check with the manufacturer to be sure. It’s another reason why I like the aforementioned CalDigit Thunderbolt 3 cables, because they are both active and are capable of providing the maximum 100W of power to eligible devices.

While, in some instances, a 0.5-meter passive Thunderbolt 3 cable may be measurably faster, in real world usage, the benefits are often negligible. 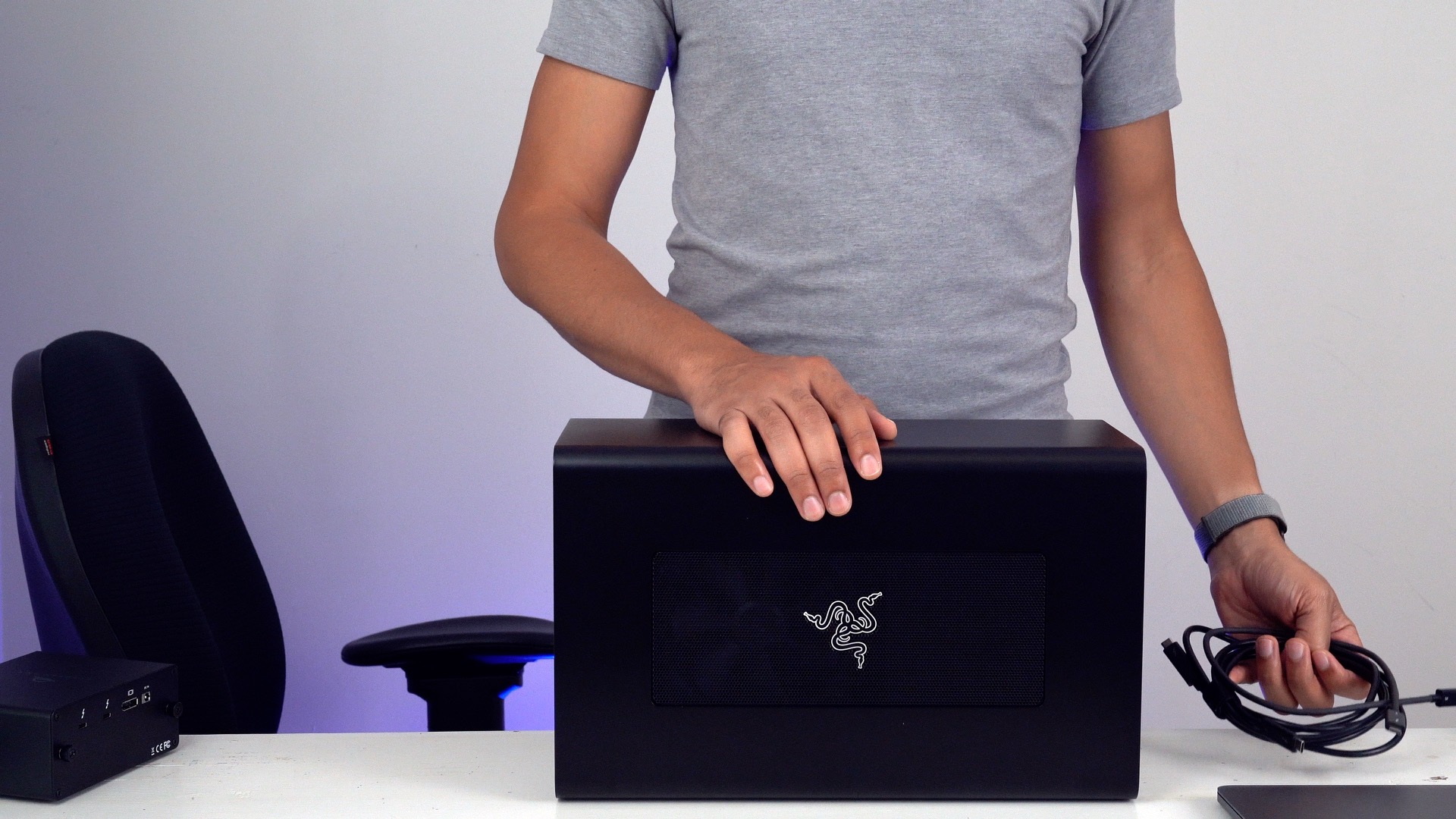 To strengthen my point, Razer, makers of the Razer Core X eGPU, actually bundles a 2-meter active cable with its graphics enclosure — a generous gesture. If passive cables were noticeably faster than active cables, then I have no doubt that Razer would have included a passive cable instead.

Unless you just don’t need the length, or don’t wish to pony up the extra cash, active Thunderbolt 3 cables may be the best option. Having the flexibility to be able to move your devices further away from your Mac can make a big difference in usability, especially with products like eGPUs or external drives.

What do you think? Are you team active, or team passive?