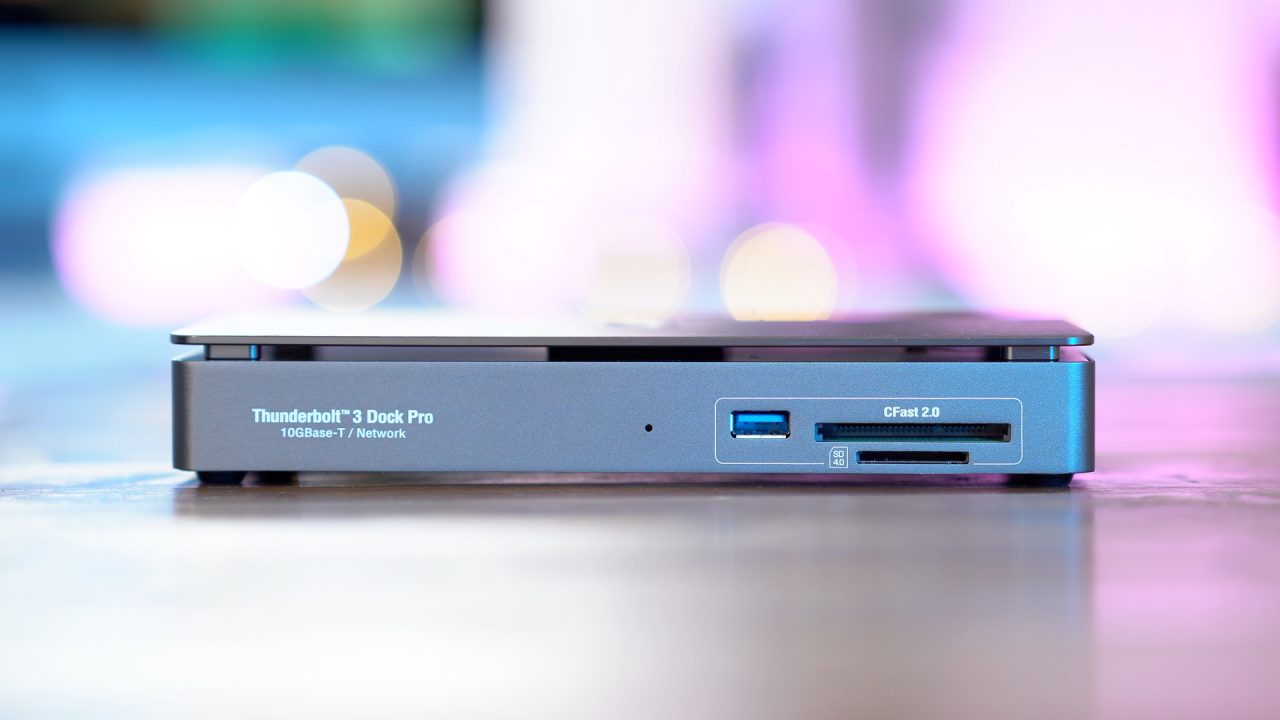 When you think of Thunderbolt 3 accessories, there are only a handful of companies as prolific as Akitio. The California-based company has released numerous Thunderbolt 3-centric products aimed at Mac users, and recently sent us its latest offering — a dock headlined by its 10GbE connectivity.

In addition to the 10GbE connectivity, the dock also features a speedy UHS-II-enabled SD Card 4.0 reader, and a rare CFast 2.0 slot. Where does the Akitio Thunder3 Dock Pro fit into a Mac user’s workflow? Watch our video review for our hands-on synopsis.

Some may balk at what this dock does not feature — 87W power delivery, USB 3.1 Gen 2, and HDMI — but I can’t think of another Thunderbolt 3 dock that comes with 10GbE connectivity in addition to lots of other I/O. For those that need faster Ethernet connectivity, this dock is one of the few options available on the market today. 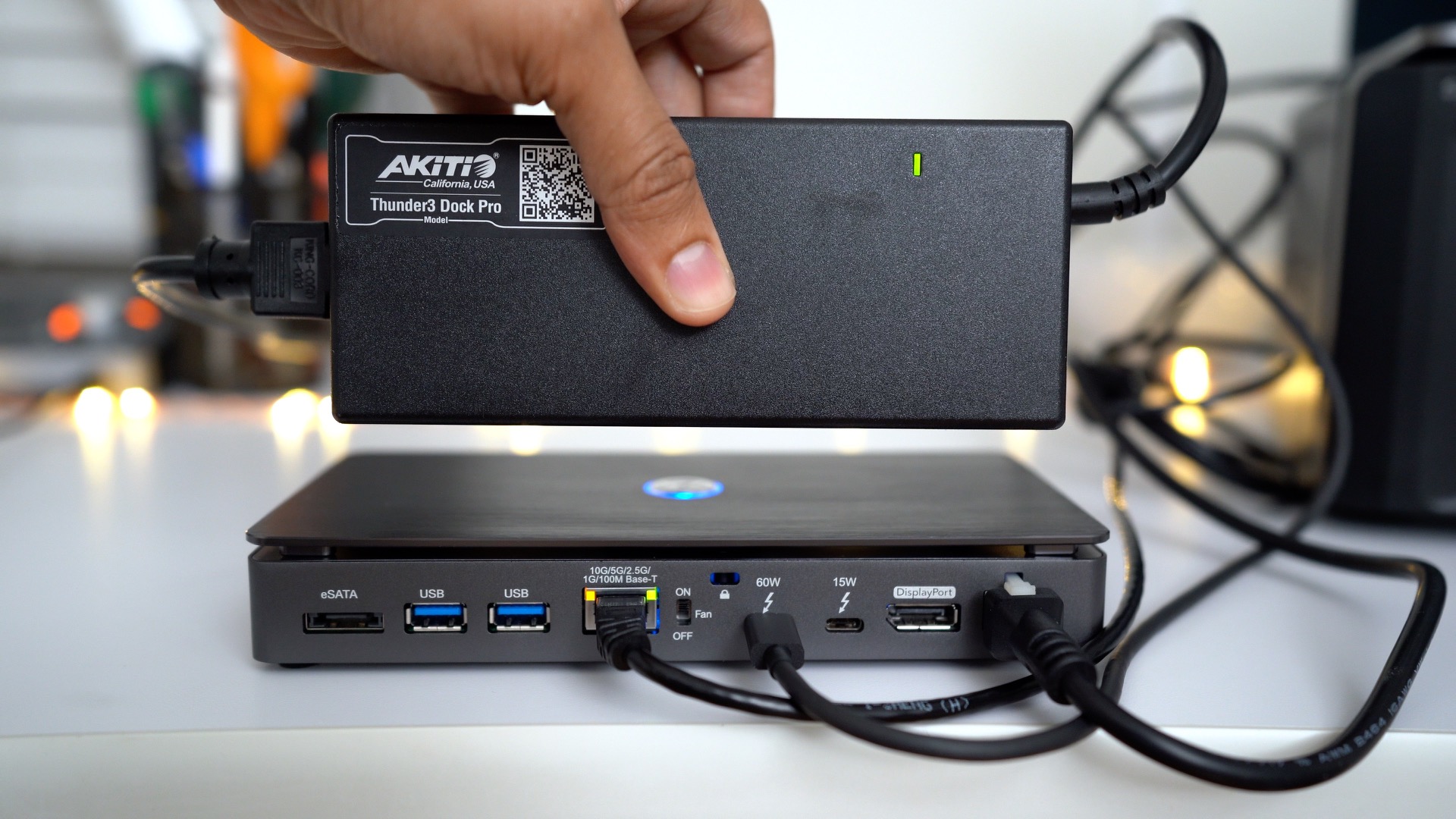 The 150W power brick is large and in charge

Other 10GbE Thunderbolt 3 options are standalone solutions without any extra I/O, such as Akitio’s Thunder3 10G Network Adapter and Sonnet’s Solo 10G adapter, though the advantage of standalone solutions is that they are bus powered, making them significantly more portable. The Thunder3 Dock Pro, on the other hand, is weighed down somewhat by its massive 150W power brick that’s nearly as large as the dock itself. 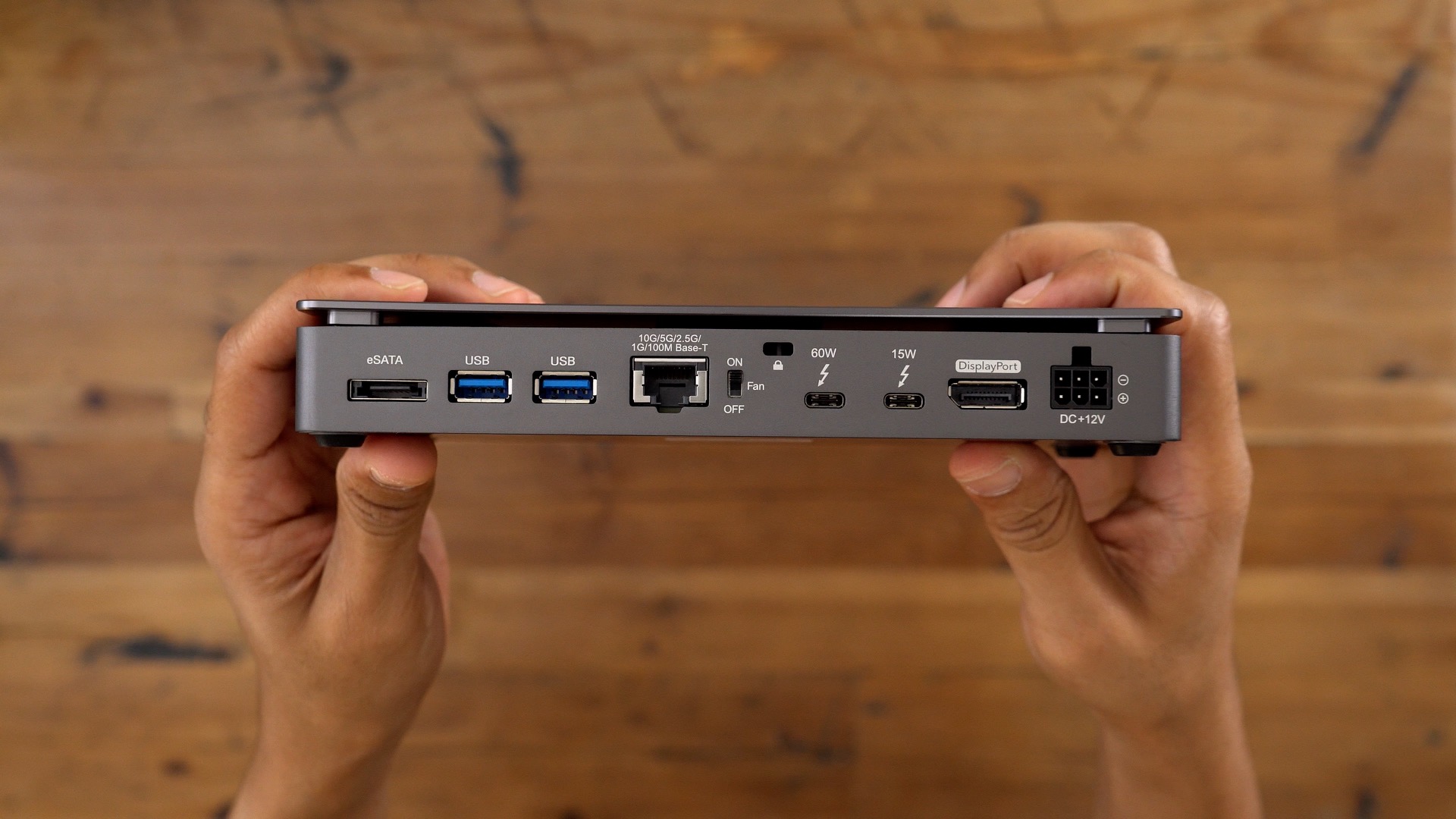 10GbE is definitely the star of the show here

There are several additional advantages that the Akitio Thunder3 Dock Pro offers as well, namely its support for high-bandwidth media like UHS-II SD Cards and CFast 2.0 cards. Several high-end cameras, like the Canon C200 utilize CFast cards for video storage, and many more cameras, like the Panasonic GH5 and Sony A7 III feature support for UHS-II SD Cards. We’ve seen UHS-II support in several docks before, but CFast 2.0 connectivity is a particularly rare find among docks like this, making it a solid option for anyone who regularly ingests media from CFast cards. 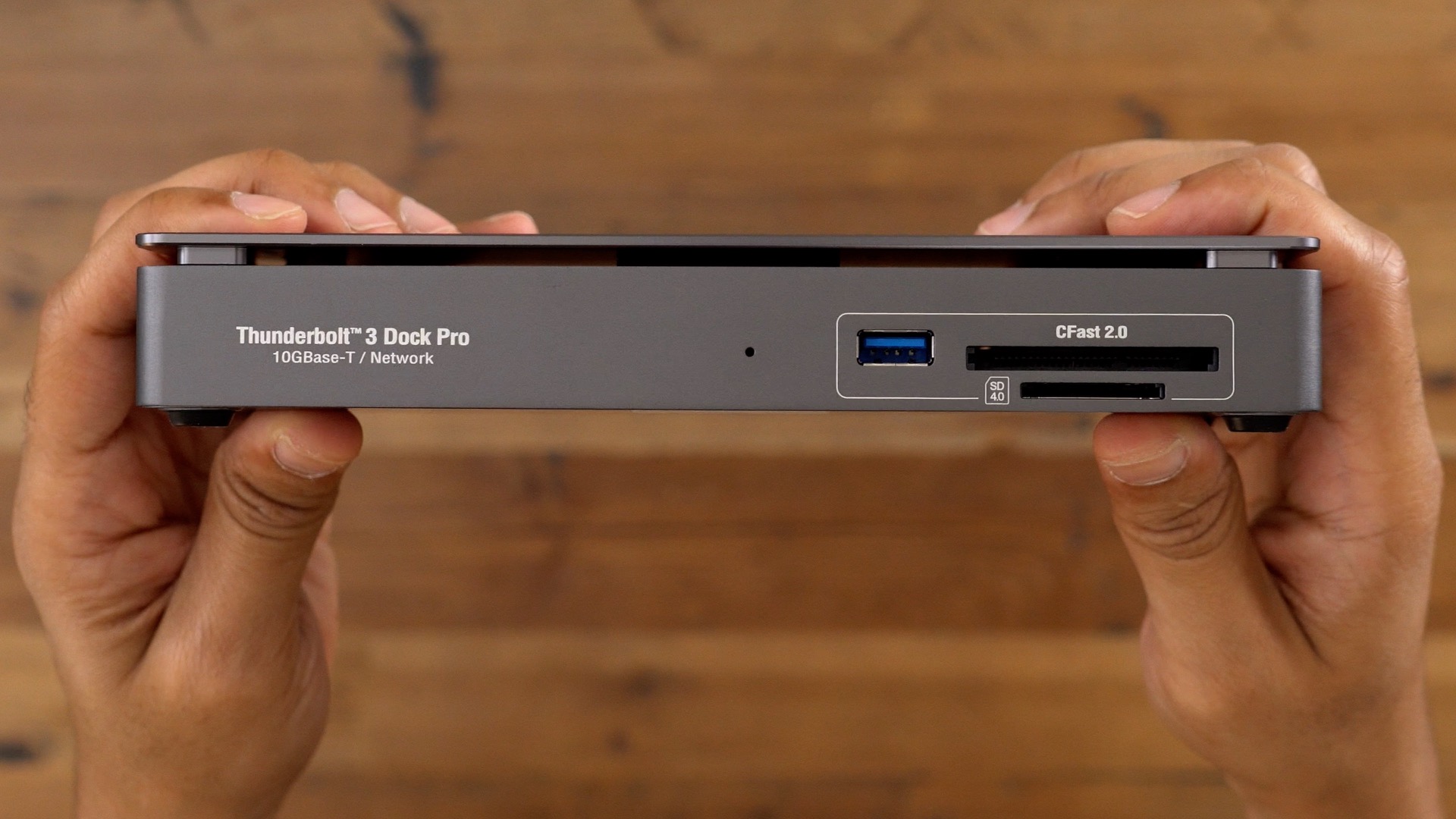 All of the other Thunder3 Dock Pro features are rather pedestrian, but any extra I/O added to a port strapped machine like the MacBook Pro is a good thing.

One last unique item that’s no stranger to Akitio products is the ability to disable the fans via a switch on the unit’s rear. The fans aren’t overly loud, but they are definitely noticeable in a quiet environment. I personally find the fan to be annoying, but I’m super sensitive to fan noise. Akitio says that fans can be disabled for up to 30 minutes at a time, which is a great option to have for folks that do voiceovers or any other activity that demands a silent environment. 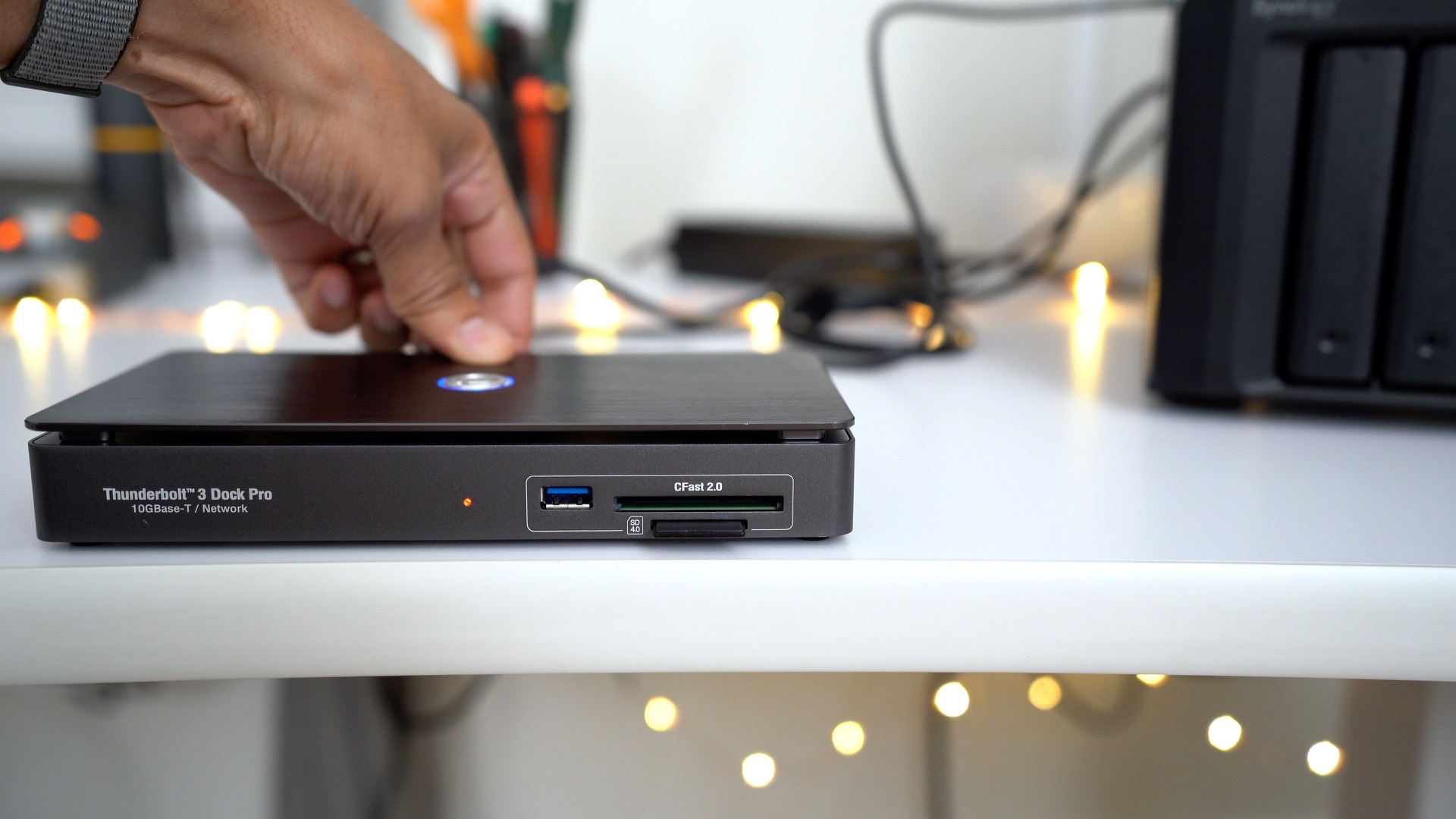 When you turn the fan off, you’re presented with a warning LED as a reminder

The build quality of the Thunder3 Dock Pro is of typical Akitio fashion, that is to say it’s good. The dock features a solid all-aluminum metal chassis combined with four non-slip feet that ensure that the unit stays firmly planted on the desktop. The brushed aluminum raised top portion of the dock features the familiar Akitio logo in the middle that glows to illustrate the presence of power and Thunderbolt 3 connectivity. 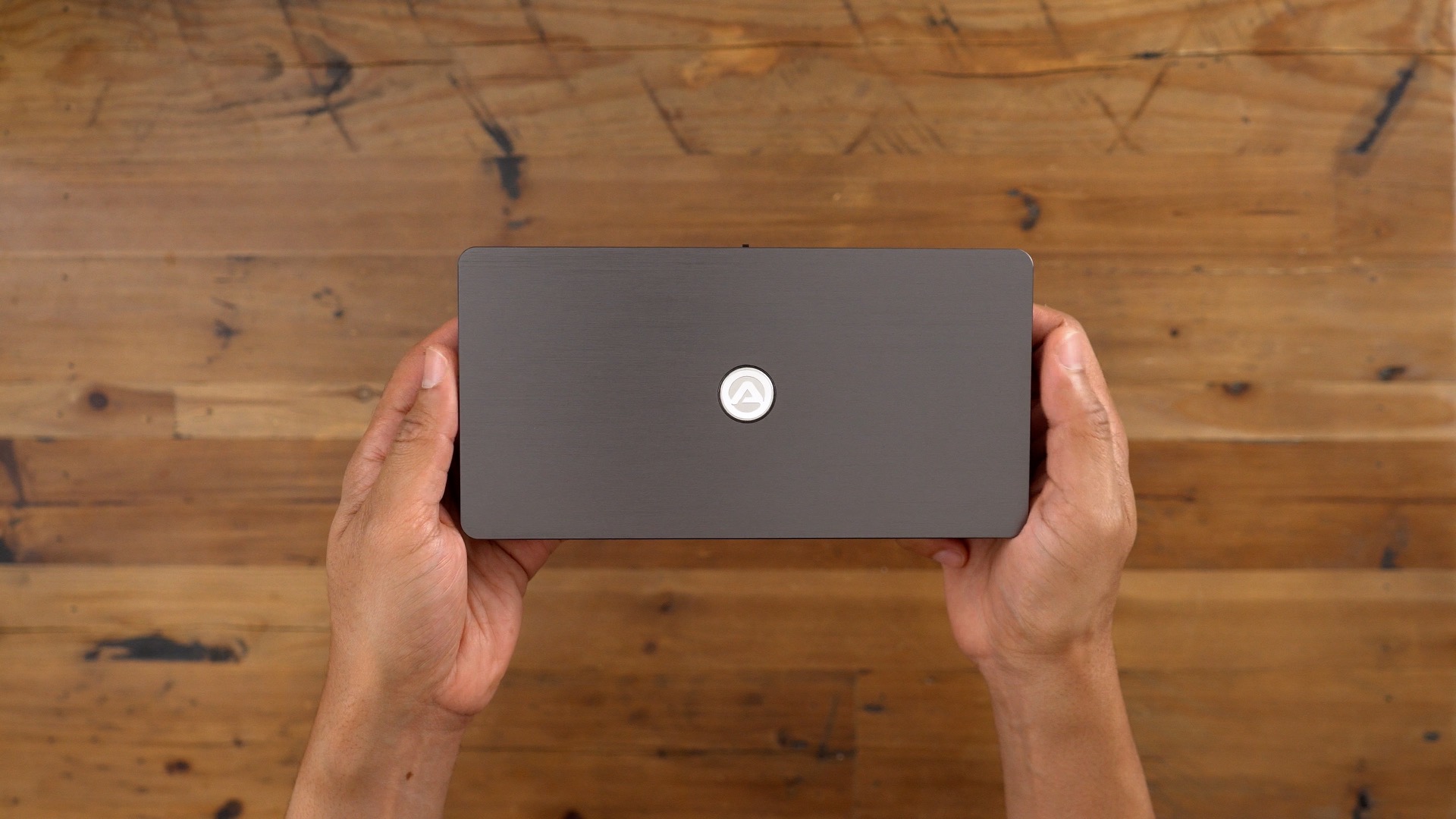 I did notice one problem with the build quality of my test unit during my inspection — the top plate portion of the dock features four risers that elevate it over the primary base. The two risers supporting the rear of the elevated plate come into contact with screws on the base of the dock, causing them to not sit flush with the base. I reached out to Akitio, and it assured me that this issue has been addressed with production units. 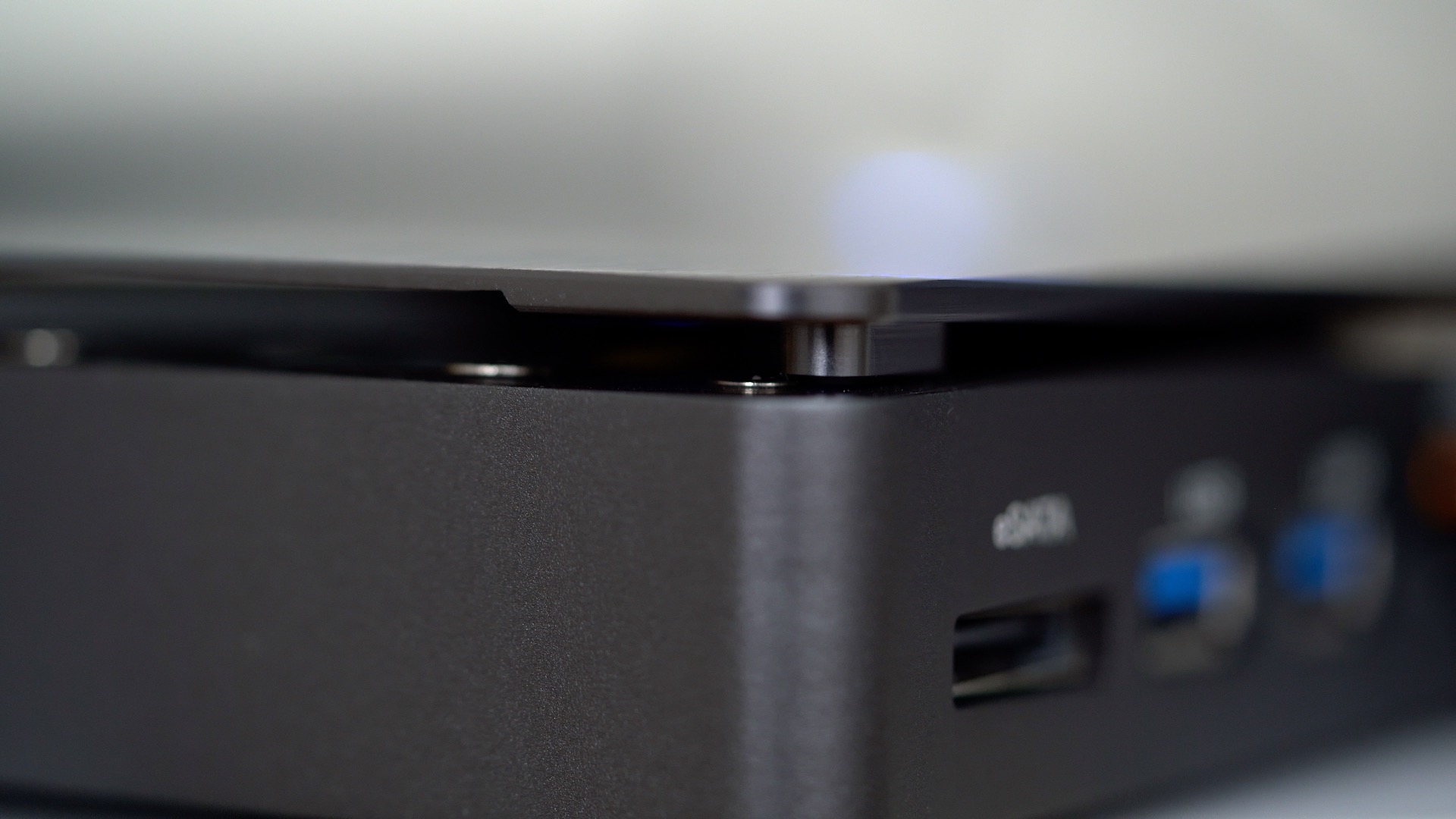 It’s no surprise: 10GbE is significantly faster than standard gigabit Ethernet that we’re all used to by now. When paired with Akitio’s dock, a MacBook Pro gains the same sort of wired network performance that the iMac Pro comes with standard.

For most home users, having access to 10GbE won’t mean much. Most home users rely on wireless connectivity, and those who do opt for hard-wired setups more times than not use standard gigabit Ethernet peripherals.

But for those in an office environment wired for 10GbE, or for those home users that have upgraded equipment to support the faster bandwidth capabilities, a 10GbE connection can make a huge difference for photo and video editing workflows.

For example, we highlighted some of the benefits that can be had from wielding a 10GbE connection with a Synology NAS for Final Cut Pro library storage. With a standard gigabit Ethernet connection, such a setup would be difficult for 4K workflows, but a 10GbE connection can make it happen with headroom to spare.

The most important thing is having the reciprocal hardware that can actually take advantage of the high bandwidth made possible by a 10GbE NIC. If you don’t have that, then you won’t be able to experience the benefits, and such a dock becomes a lot less helpful than it would be otherwise.

But Ethernet connectivity isn’t the only reason why a user should consider this dock. Having an SD Card 4.0 reader makes transferring large files from UHS-II SD Cards significantly faster than standard readers. We broke down the benefits of UHS-II cards in an earlier post that put Sony’s speedy G-Series card to the test using an iMac Pro.

Even more rare than an SD Card 4.0 reader is a CFast 2.0 reader. CFast cards aren’t nearly as prolific as SD Cards, but if you work with cameras like the aforementioned C200 or Canon 1DX Mark II, having an external reader can make a big difference in a video workflow. 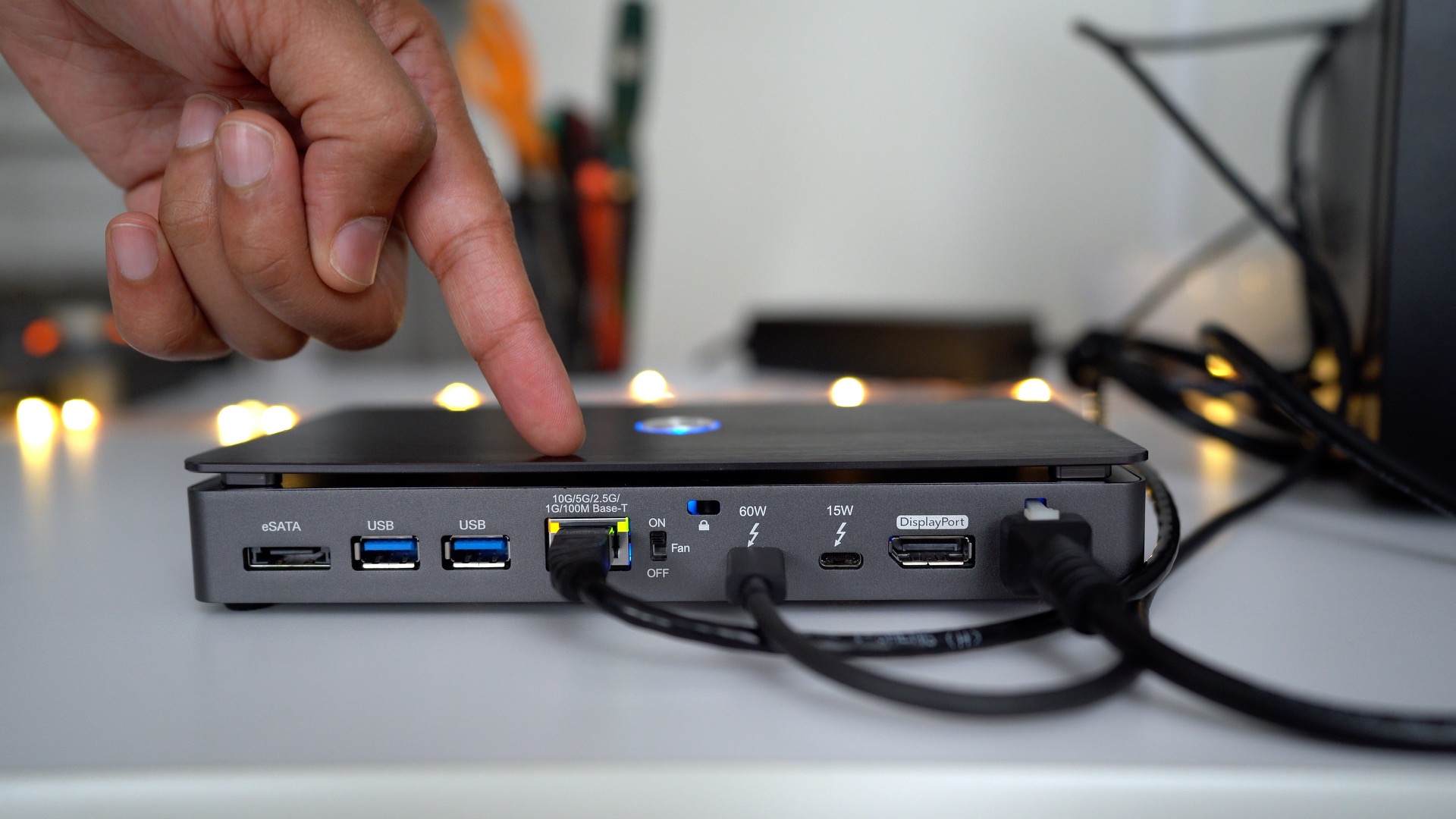 These features, coupled with the extra Thunderbolt 3 port that affords the ability to daisy chain, plus the extra I/O like DisplayPort, eSATA, and several USB 3.1 (gen 1) ports, makes the Thunder3 Dock Pro a compelling option for those involved with photography and video workflows on the MacBook Pro. It brings two notable iMac Pro features — a UHS-II SD Card reader and 10GbE — and makes them available on the MacBook Pro and other computers that support Thunderbolt 3.

The Akitio Thunder3 Dock Pro is a product that’s mostly aimed at creative professionals working with large data — think 4K video and RAW photos. Its 10GbE connectivity means that it can quickly transfer large files over a long-range, which is great when offloading footage to a server or even when performing real-time edits of footage stored on a server. If that doesn’t describe your daily workflow, you may be better served by more consumer oriented Thunderbolt 3 docks or hubs, but if it does fit your workflow, it can be a real asset to your MacBook Pro.

What are your thoughts on the Thunder3 Dock Pro? Drop us a line in the comments below.