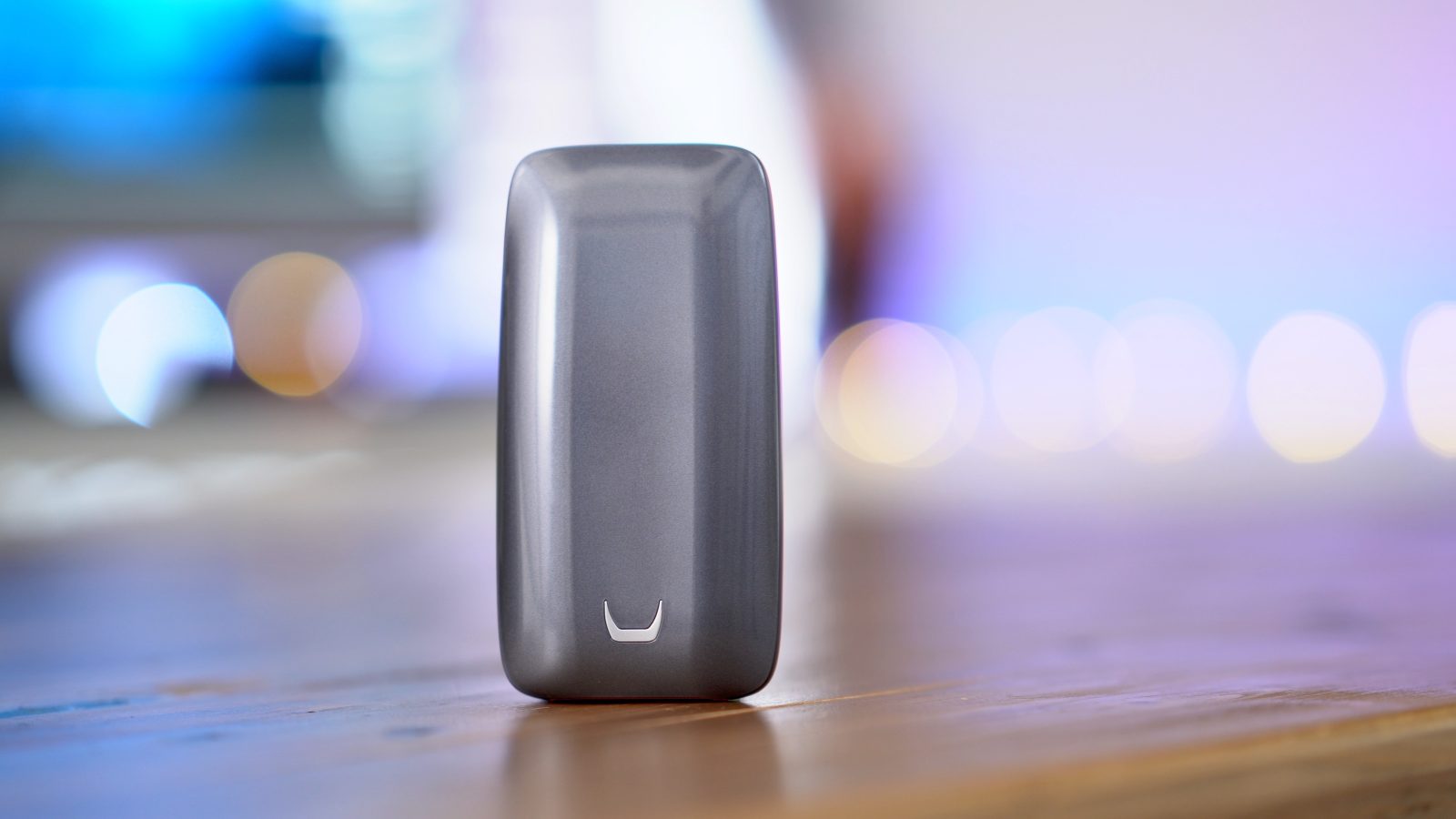 Last year I reviewed the Sonnet Fusion Thunderbolt 3 SSD, and at the time it was the fastest bus-powered external SSD that I had ever tried. But there’s now an external drive that eclipses the performance of the Fusion SSD, and it’s made by Samsung, a company with a long reputation of producing fast, reliable SSD storage.

The precursors to the X5 — Samsung’s T3 and T5 portable SSD — are still extremely popular products for those looking for a reliable and fast external storage solution, but thanks to the prevalence of Thunderbolt 3, the X5 is turning up the speed rating significantly with up to a whopping 2,800 MB/s read speeds and 2300 MB/s write.

Is the Samsung X5 Portable SSD, with its supercar-inspired looks, worth its rather hefty price of admission? Watch our hands-on unboxing and review for the answer.

The most remarkable thing about drives like the Samsung X5, is that they are able to operate at such fast speeds in a bus-powered, compact form factor. There is no active cooling to be found inside the Samsung X5, so it’s dead quiet while data is whisked along the Thunderbolt 3 bus. This is perfect for environments that require silence, like when performing voiceovers or other audio recordings. Since this type of drive is doubtlessly aimed at creative professionals, like video content creators, this makes sense. 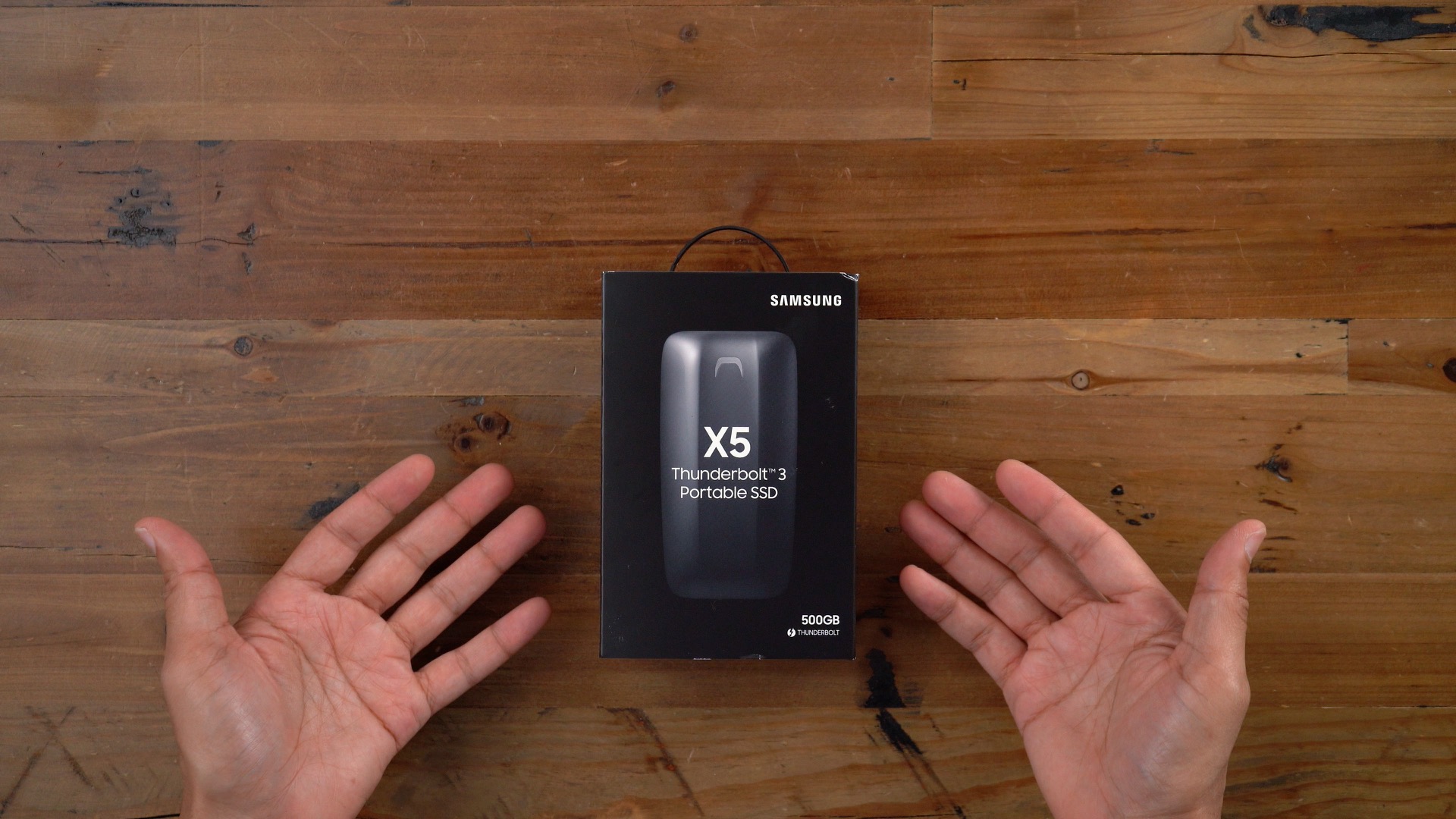 The heat sink inside the X5 does a remarkable job of keeping the NVMe SSD inside cool. These drives get very hot as they operate, yet Samsung notes that the heat sink helps keep surface temperature below 45°C. That’s still very warm, to be sure, but okay for a passively cooled setup contained in an enclosure that’s a mere 0.8-inches thick. 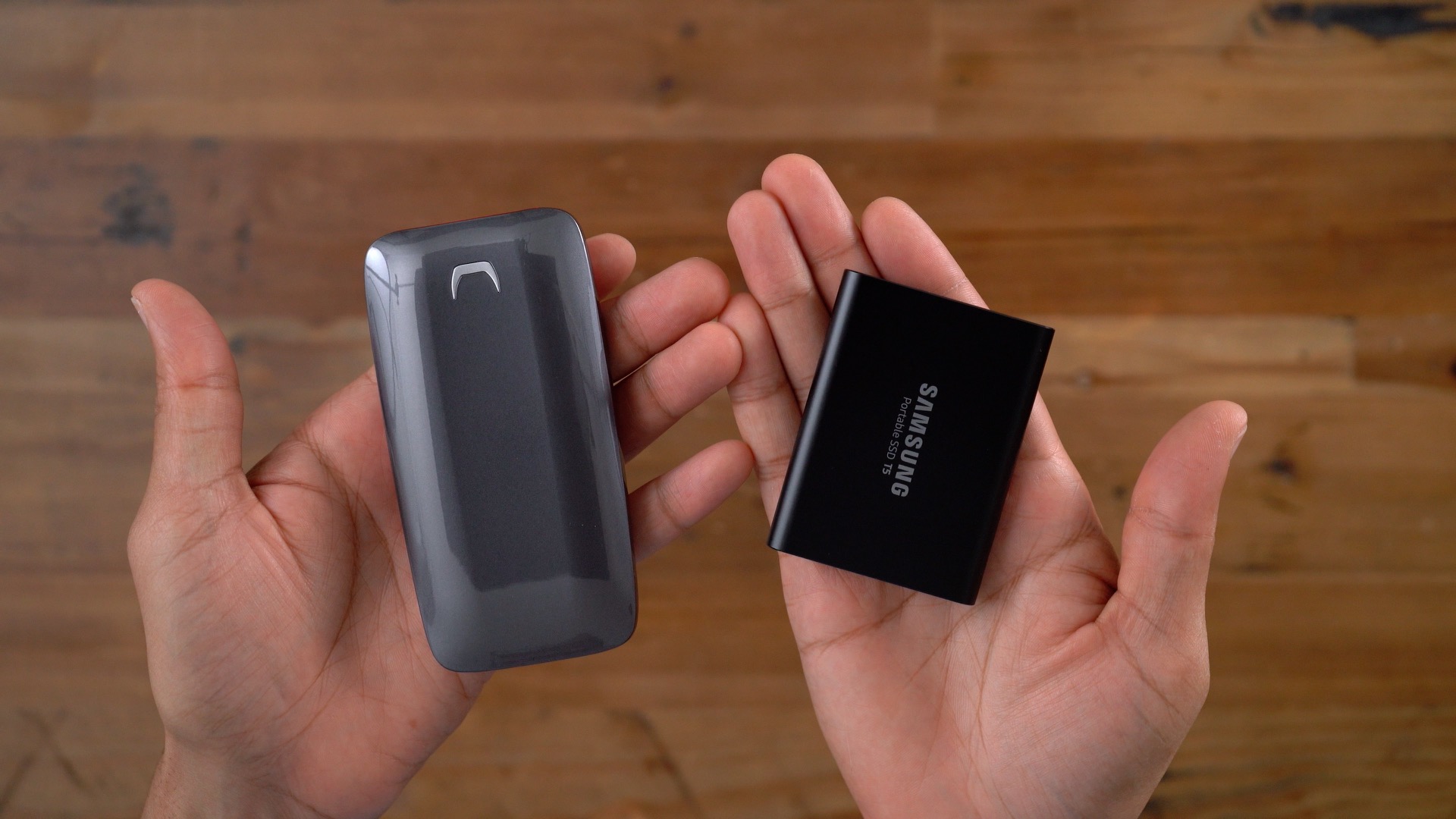 The design isn’t as compact as the Samsung T5, but that’s understandable when you consider the type of speeds that the X5 is able to produce. If you own a Mac machine with Thunderbolt 3, this makes an outstanding drive for on-the-go photo or video editing. It won’t be as fast as your Mac’s built-in storage, but it’s not far behind, and you’d be hard-pressed to recognize the difference when working with data stored on the X5 as opposed to the built-in drive anyway. 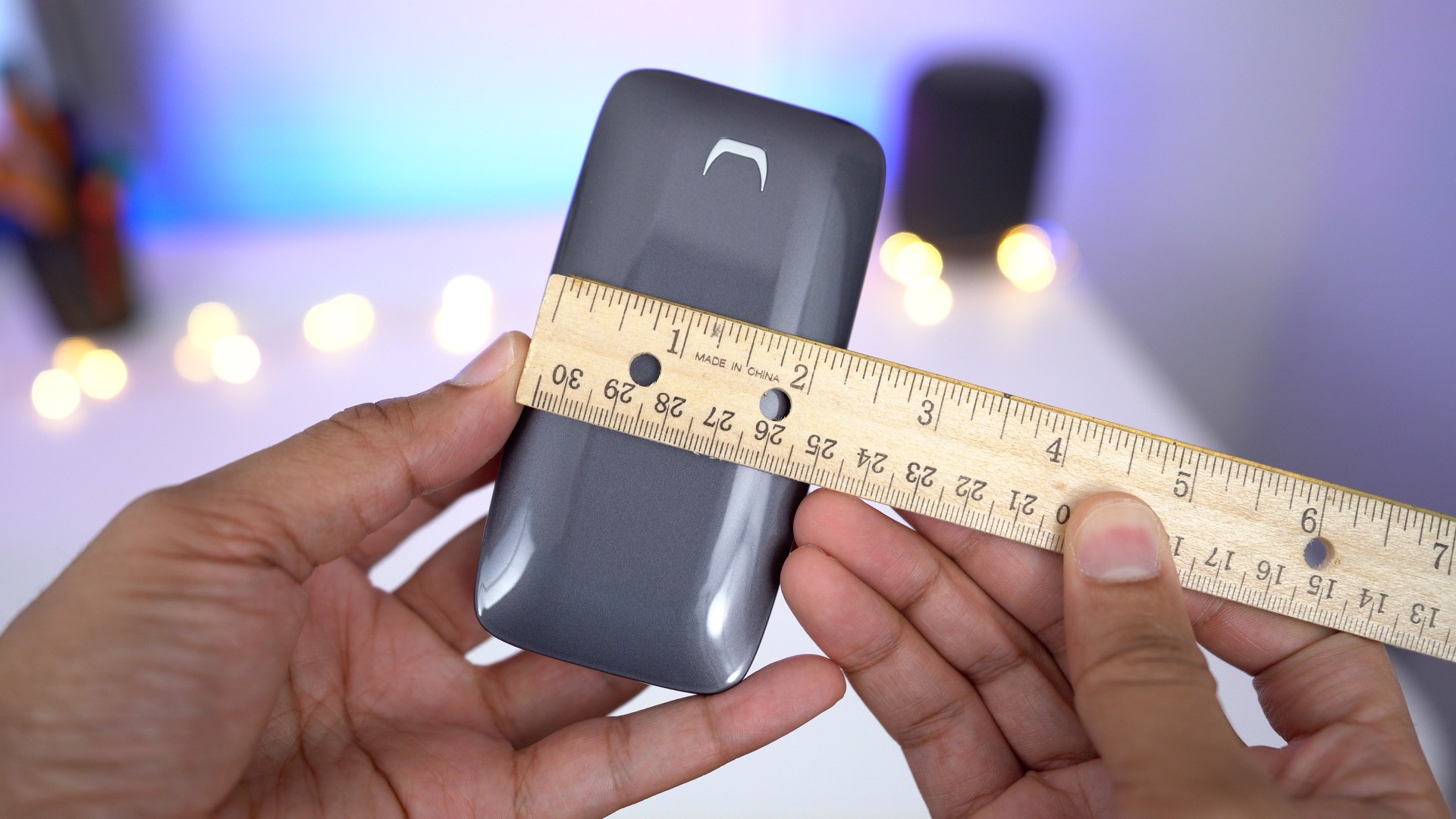 When the Samsung X5 Portable SSD was first revealed, I was a bit taken aback by the design, especially when you consider that the company’s T5 drive was so tiny, unassuming, and minimalistic. The unit only comes with one color choice featuring a glossy metal space gray outer shell with a fire engine red front panel and bottom. The X5 features a very opinionated design, and Samsung notes that it was inspired by a supercar, further emphasizing the drive’s speed potential. 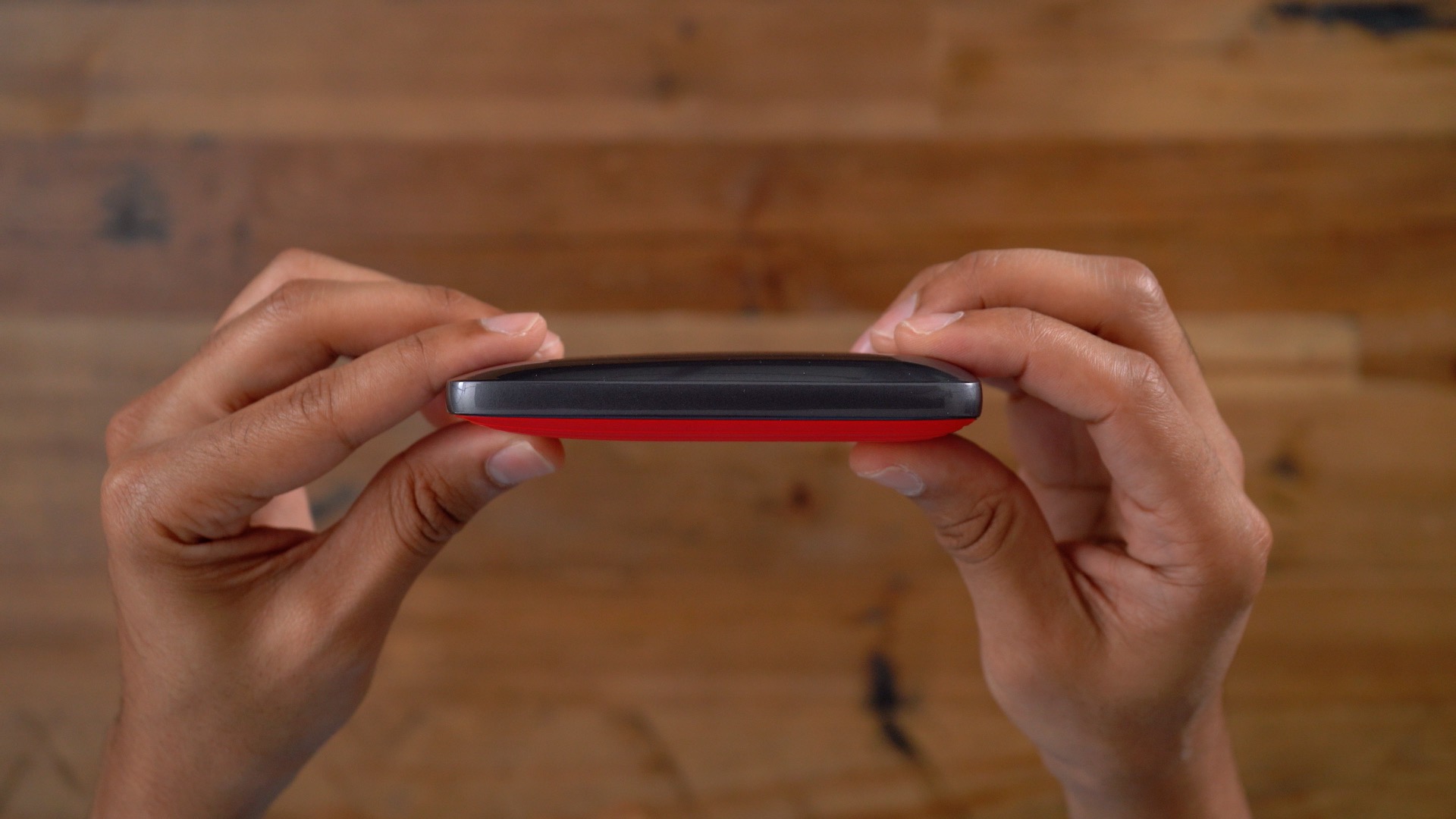 But the design is not all about looks — functionality was at the forefront, starting with the drive’s internal components. Not only does the passive heat sink work to keep it cool, but the internal protection guard helps the unit withstand drops up to 2 meters, while a matte bottom prevents slippage while on the desk or in the hand. 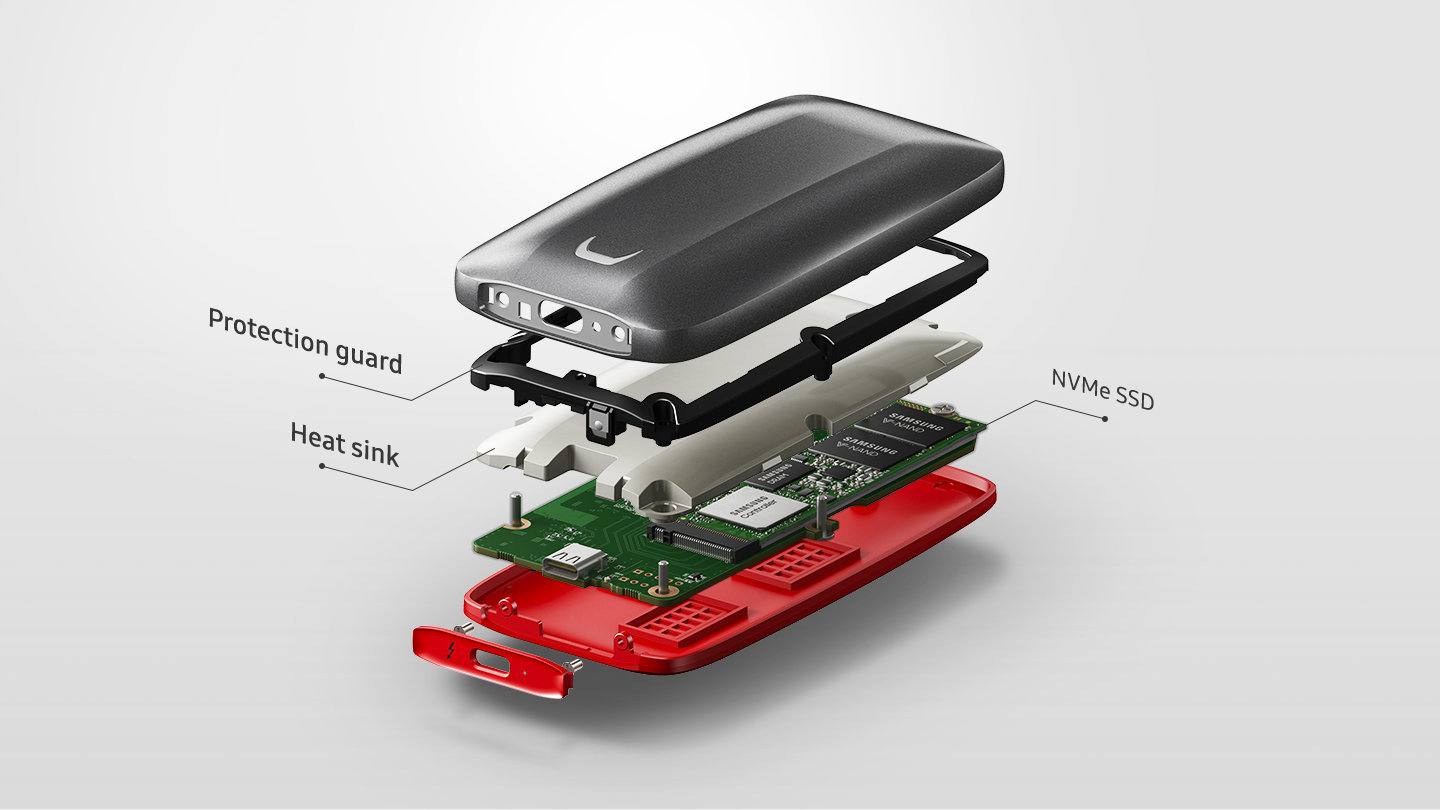 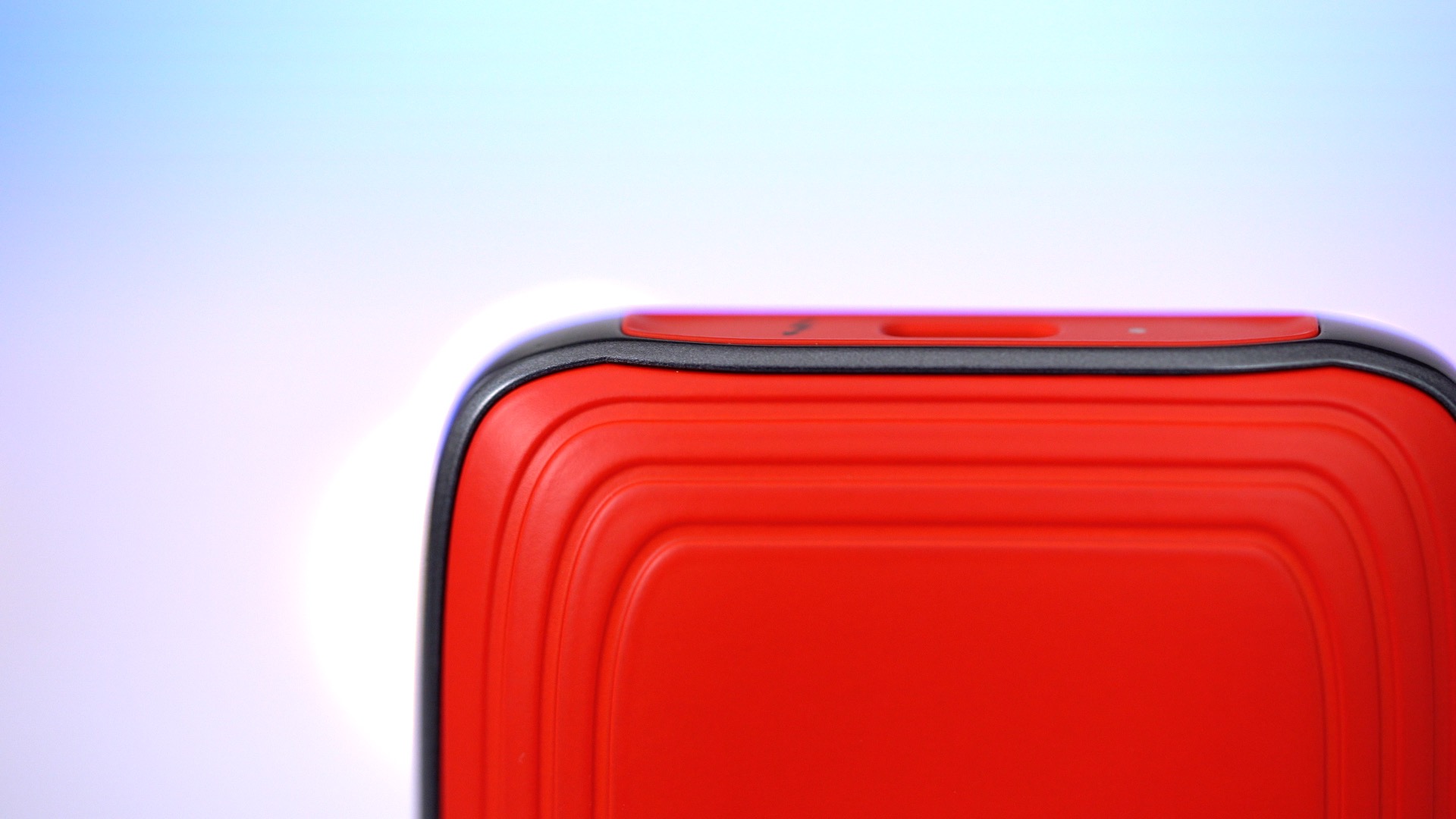 Does the Samsung X5 live up to its billing as the bus-powered speed king? Yes.

Keep in mind that 500 GB versions have a slower max write speed up to 2,100 MB/s versus the 1TB and 2TB versions 2,300 MB/s up to rating. Because the SSD controller can access the additional flash modules found on larger drives in parallel, it is not unusual to see faster performance on higher capacity drives. Either way, regardless of the version of the Samsung X5 that you go for, it’s still the fastest external singular bus-powered SSD that I’ve seen. 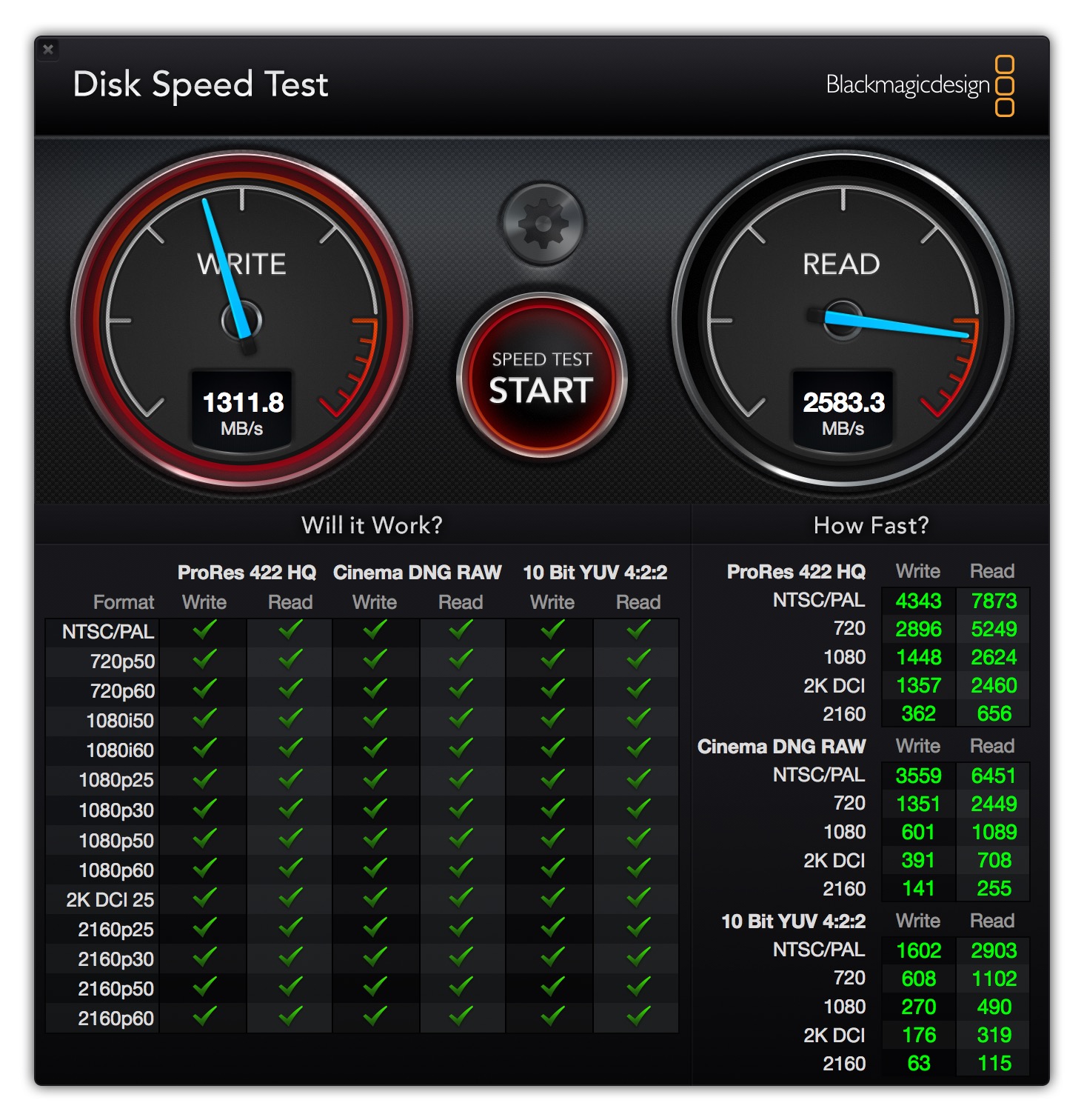 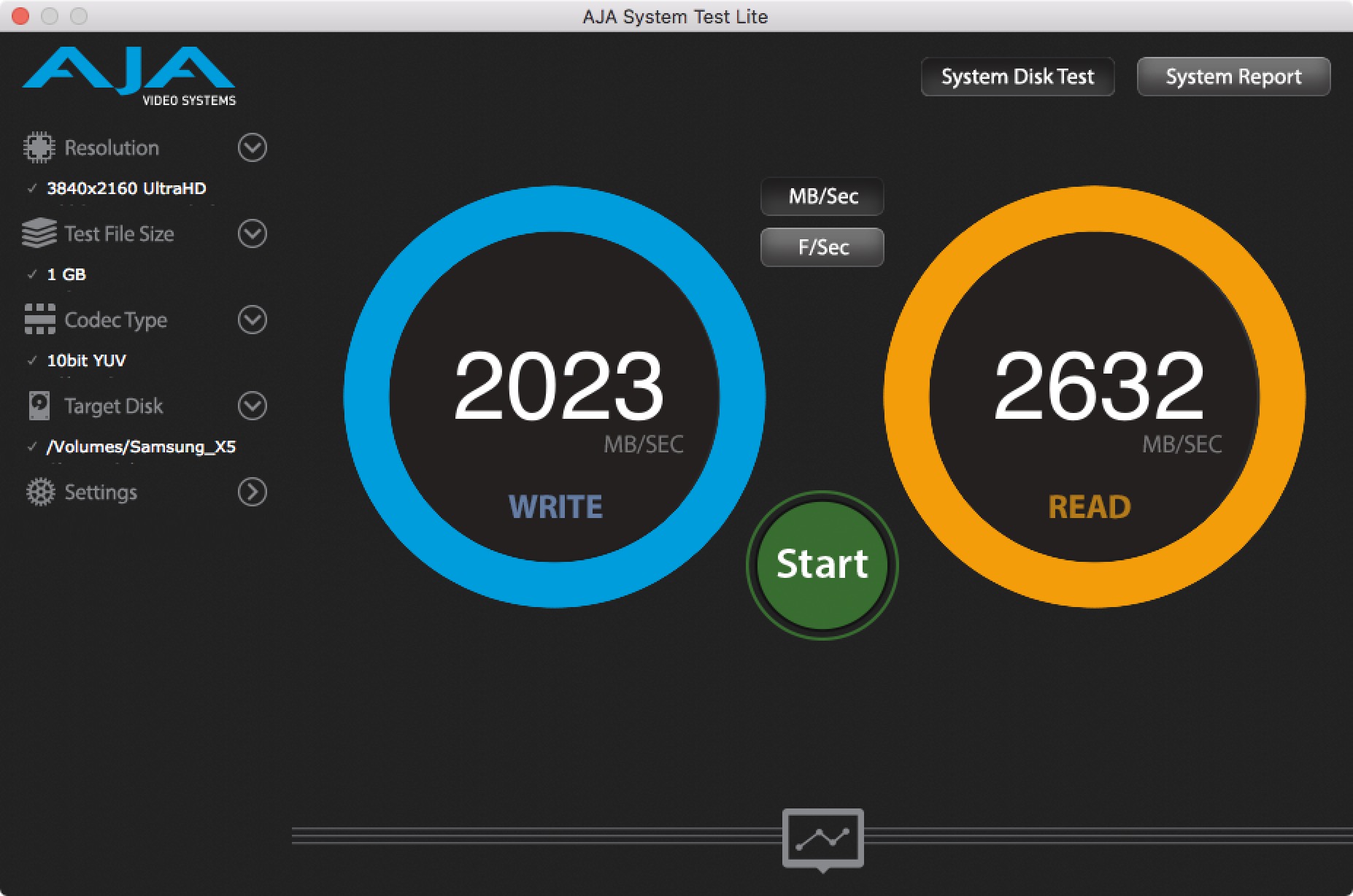 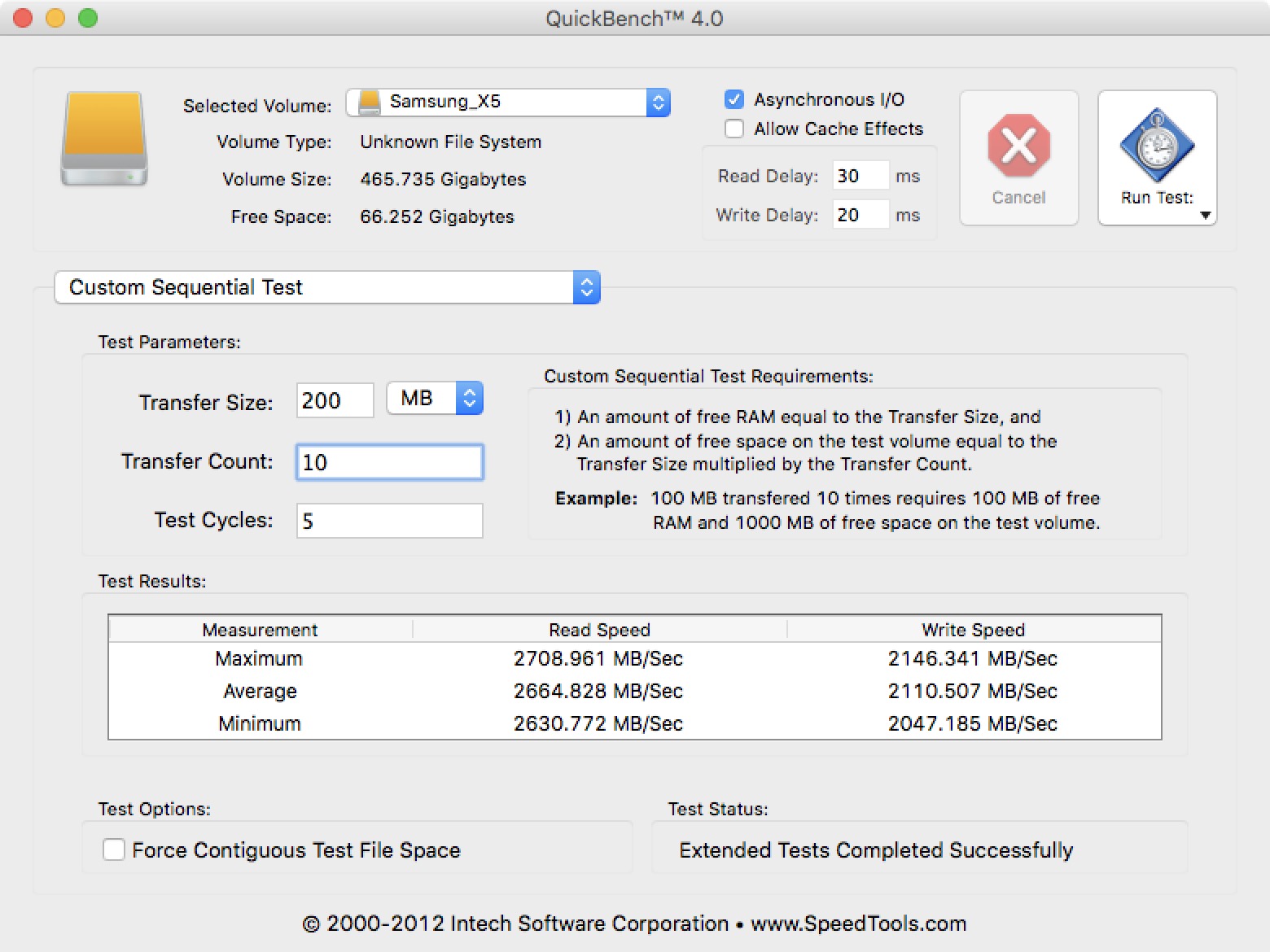 Knowing how hot NVMe drives can get, my main concern with the Samsung X5 Portable SSD had to do with heat. Would the passively-cooled unit allow the drive to operate normally? The answer to that question appears to be yes, although the drive’s passively cooled nature means that Samsung’s thermal tech has to maintain optimal performance and temperatures to keep the drive safe. While the drive gets close to and sometimes exceeds its “up to” speeds in some tests, you should maintain realistic expectations regarding sustained performance. The good news is that at no time, even during extreme benchmark tests, did the drive become so warm that it became too hot to hold. 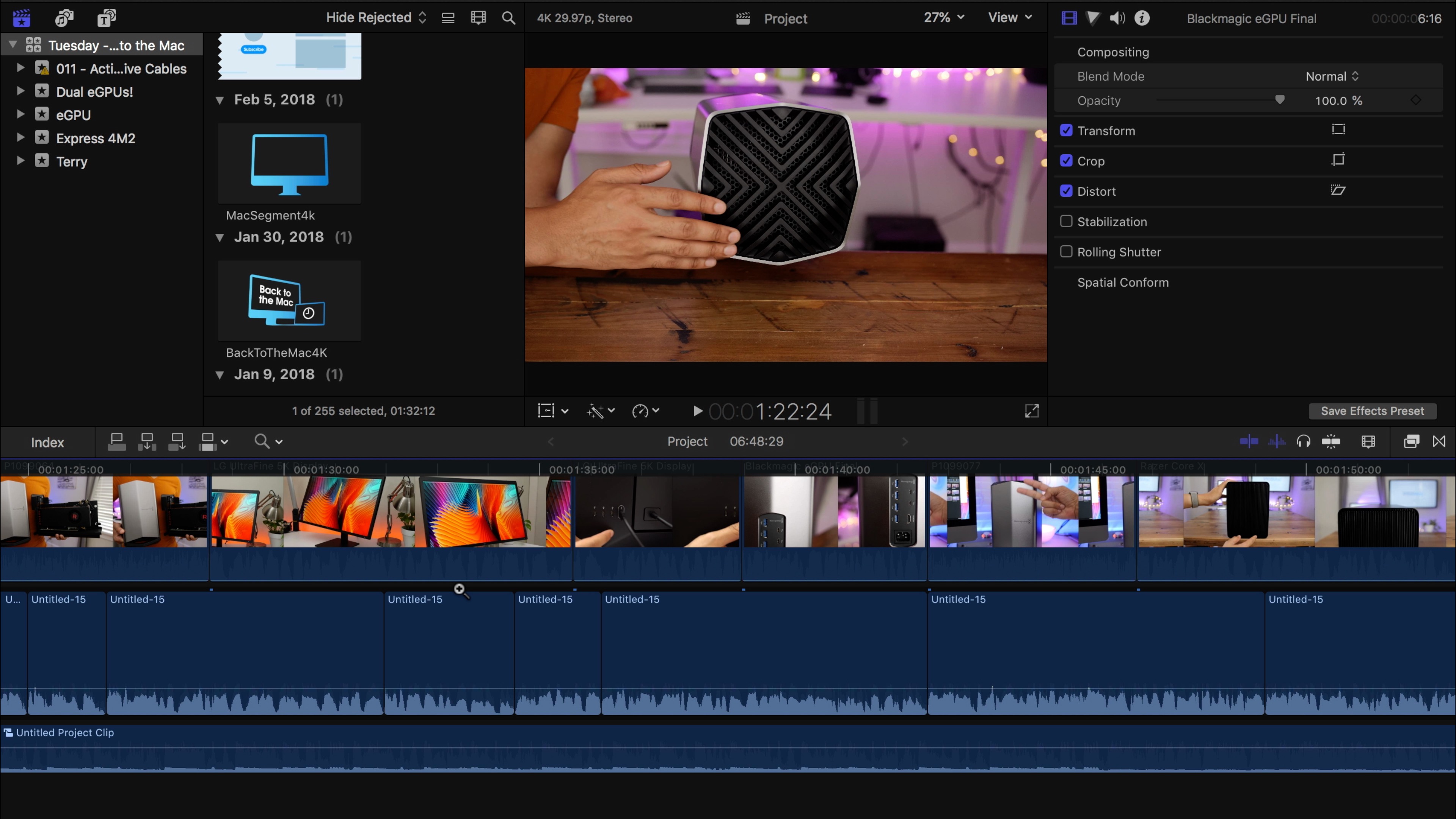 Waveform regeneration in FCP X is instantaneous, as is playback

Benchmarks only tell part of the story, though. In real world usage, such as when editing large Final Cut Pro X projects, I found the drive to be very responsive.

Editing a project right off of the external drive, I could not tell the difference between it and the internal drive on my MacBook Pro. For instance, playback was immediate for my 4K project, and zooming in and zooming out on the timeline resulted in instant waveform previews.

To be clear, however, even the lesser Samsung T5 can easily handle 4K workflows with similar responsiveness. Outside of the initial ingesting of footage, which would could potentially see a boost from the higher write speed, you’re going to need to work with higher quality source media (frame rate, bit rate, and resolution) to really see the benefit of a drive like the Samsung X5 during the editing phase.

Indeed, Samsung’s engineering expertise with SSDs shines in this latest example. The X5 provides faster performance, coupled with a sleeker design than other NVMe-based external Thunderbolt 3 SSDs that we’ve tested in the past. It’s also several times faster than drives wielding SATA III technology, such as Samsung’s own T5 SSD.

If you’re considering going the external drive route to save money on a build-to-order MacBook Pro, you’re not going to do so by opting for the Samsung X5. This drive is actually more expensive than Apple’s build-to-order options, or in the case of the 2TB version, the same exact price at $1400. If it’s just about saving money, you’d be better off opting for a lesser external SSD, like the Samsung T5, or just going with Apple’s built-in storage options. 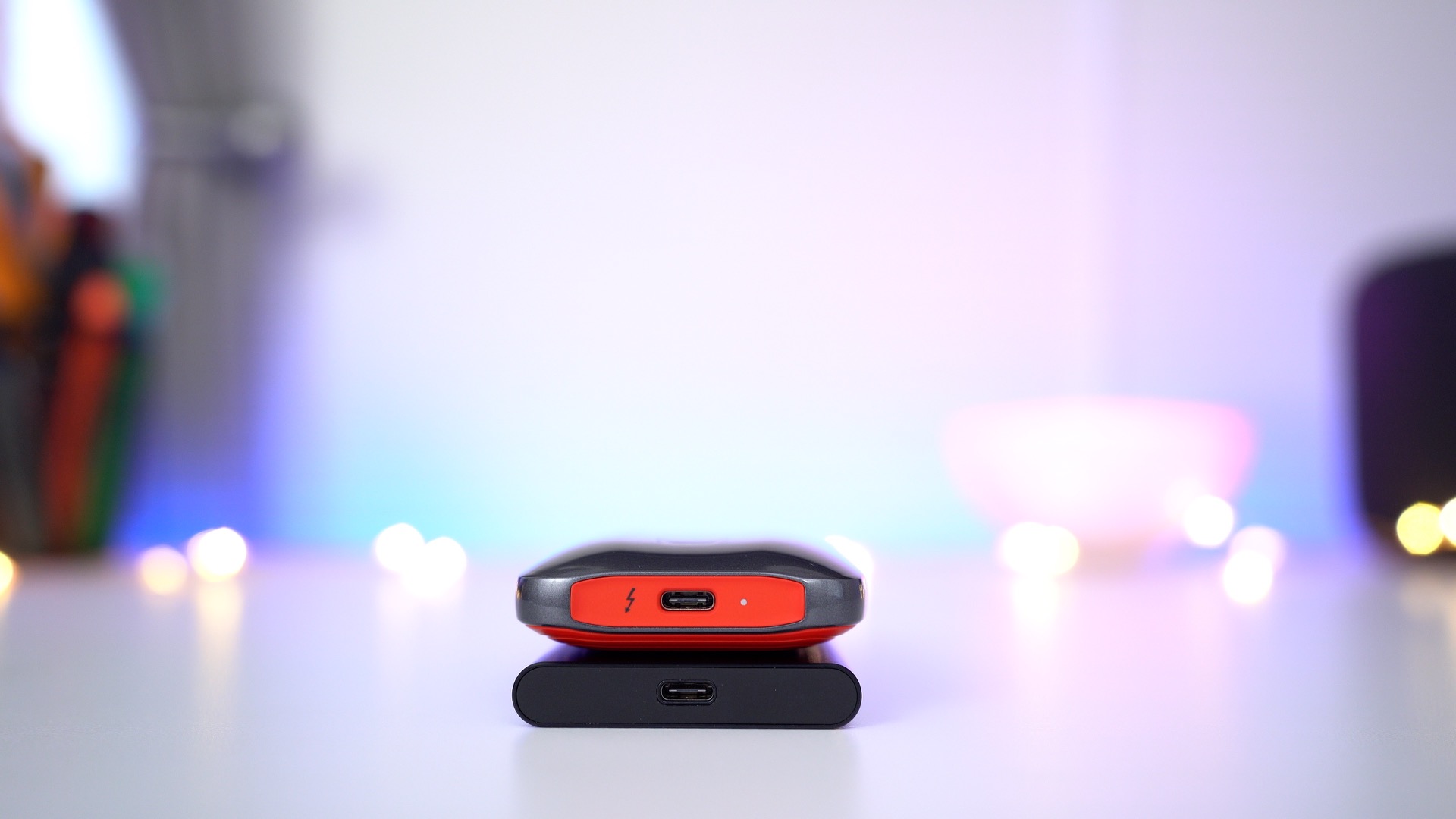 Besides, having built-in storage will always be a more convenient solution than having to deal with external drives, except in cases where you need to frequently access large media files on multiple computers. In this case, having your data stored on an external drive may prove to be the more ideal solution. 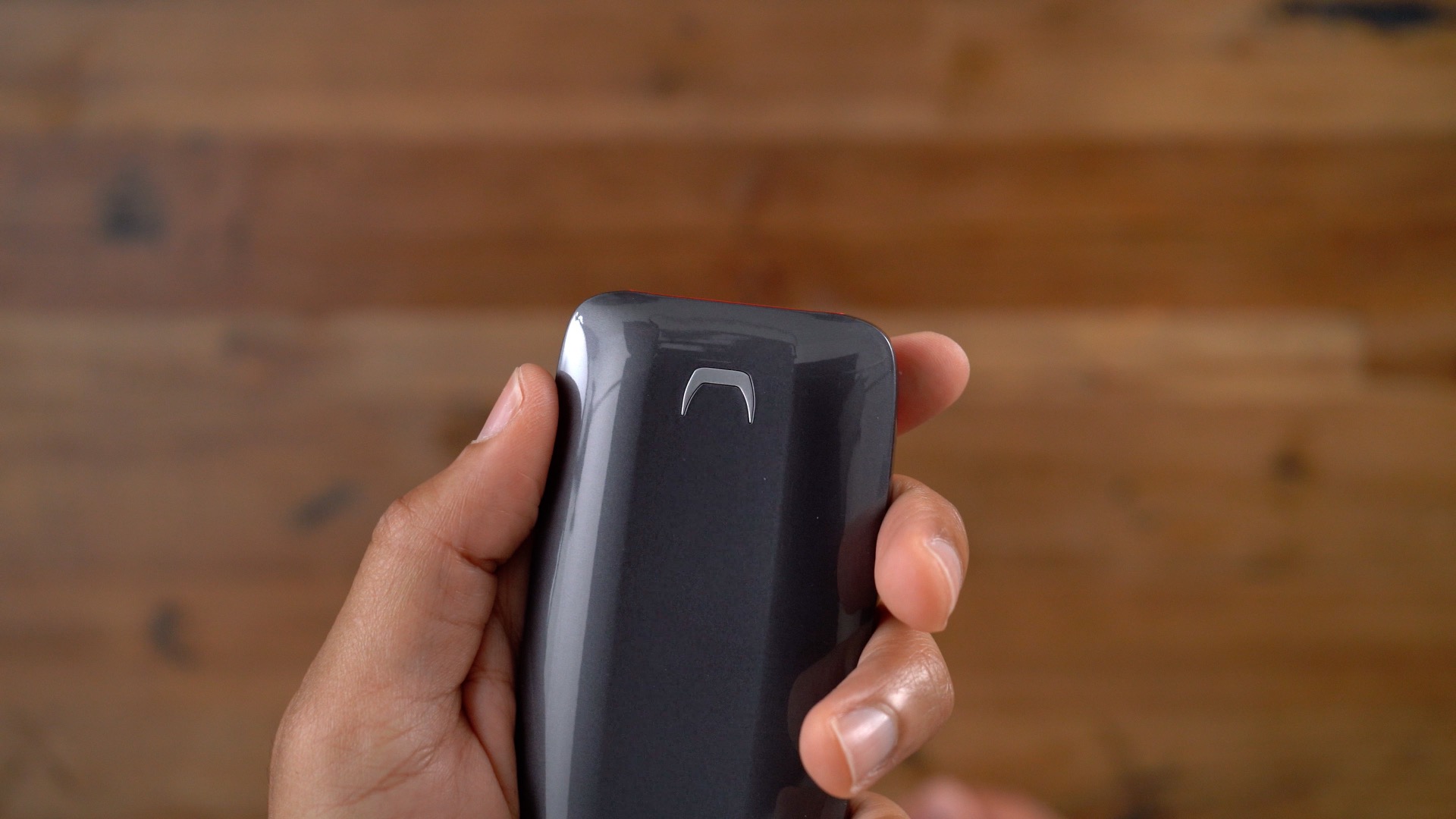 If you’re a creative professional that needs lots of fast external storage in a relatively sleek form factor, then this drive may be worth consideration. For now, the Samsung X5 stands above all other bus-powered external drives in its class as the indisputable portable speed king. That said, I think that many users will still find less expensive SATA III-based USB 3.1 drives like the Samsung T5, or SanDisk Extreme Portable SSD as a more than adequate solution for their workflows.

What are your thoughts on the Samsung X5 Portable SSD? Please leave your feedback down below in the comments.