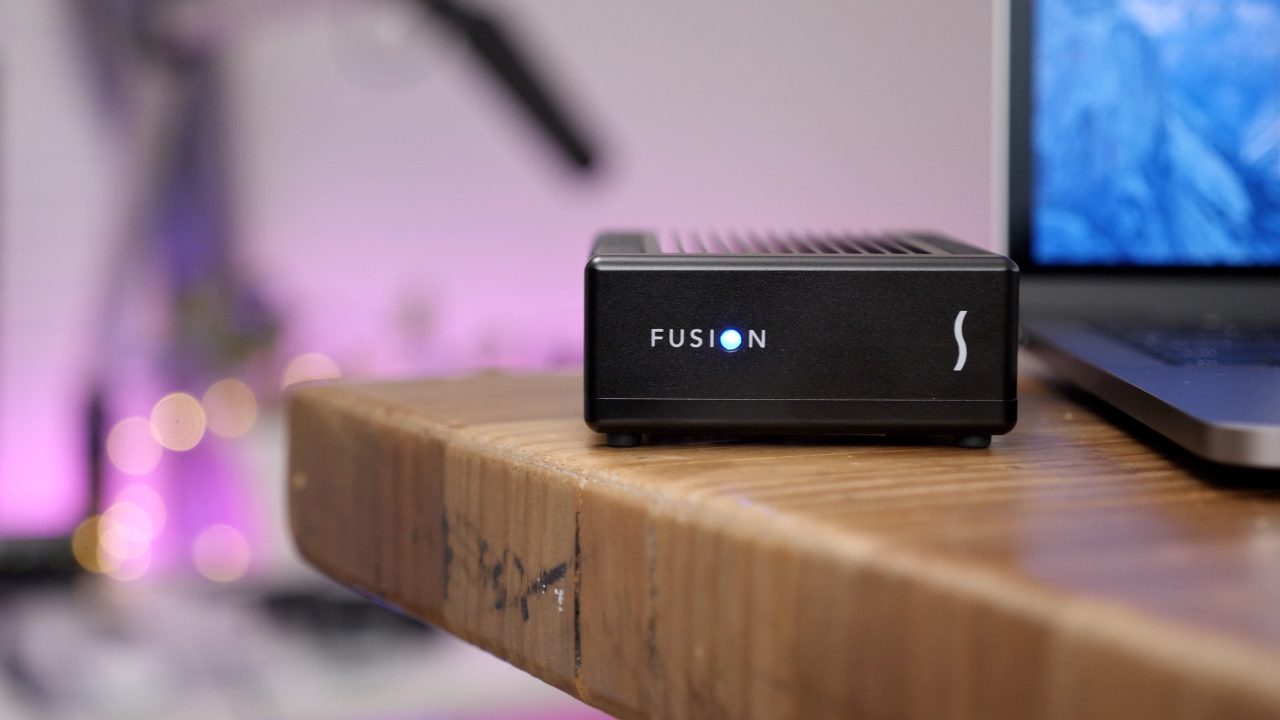 If you’re looking for the fastest bus-powered portable external drive, then look no further than the Sonnet Fusion Thunderbolt 3 PCIe Flash Drive with 1TB of storage. Capable of theoretical data transfer rates up to 2600 MB/s, it’s perfect for 4K workflows and beyond.

The most remarkable thing about this drive is how utterly compact it is, and how with just a single Thunderbolt 3 connection, it allows for blistering-fast data transfer rates that can compete with the real world performance of a 2017 MacBook Pro’s built-in NVMe SSD.

In this hands-on video walkthrough, we explore what Sonnet has labeled as the world’s fastest bus-powered portable storage device. Does it live up to the hype?

Sonnet provided me with a review unit, so I can’t comment on the retail packaging. What I can note is how dead-simple the whole setup is. All that was in the box was an instruction pamphlet and the Fusion SSD. The Fusion SSD is made out of black aluminum, and the enclosure helps to disperse heat and protect the components inside, seeing as there is no fan. The Sonnet Fusion drive can get quite warm when in continuous use, but as long as you don’t rest your hand on it for an extended amount of time, it’ll be fine. If you work in a production environment where silence is necessary, you’ll appreciate the completely silent, fan-less operation.

The Fusion SSD looks like an oversized deck of playing cards, and is compact and rugged enough that it should travel with ease. On the front of the unit you’ll find Sonnet’s logo, along with the Fusion name. There is a blue power/activity indicator LED on the front of the device, which makes up the ‘o’ in the name Fusion. I’ve never been a fan of constantly-on LED power/activity lights, but I didn’t find the light on the Fusion to be overly distracting. 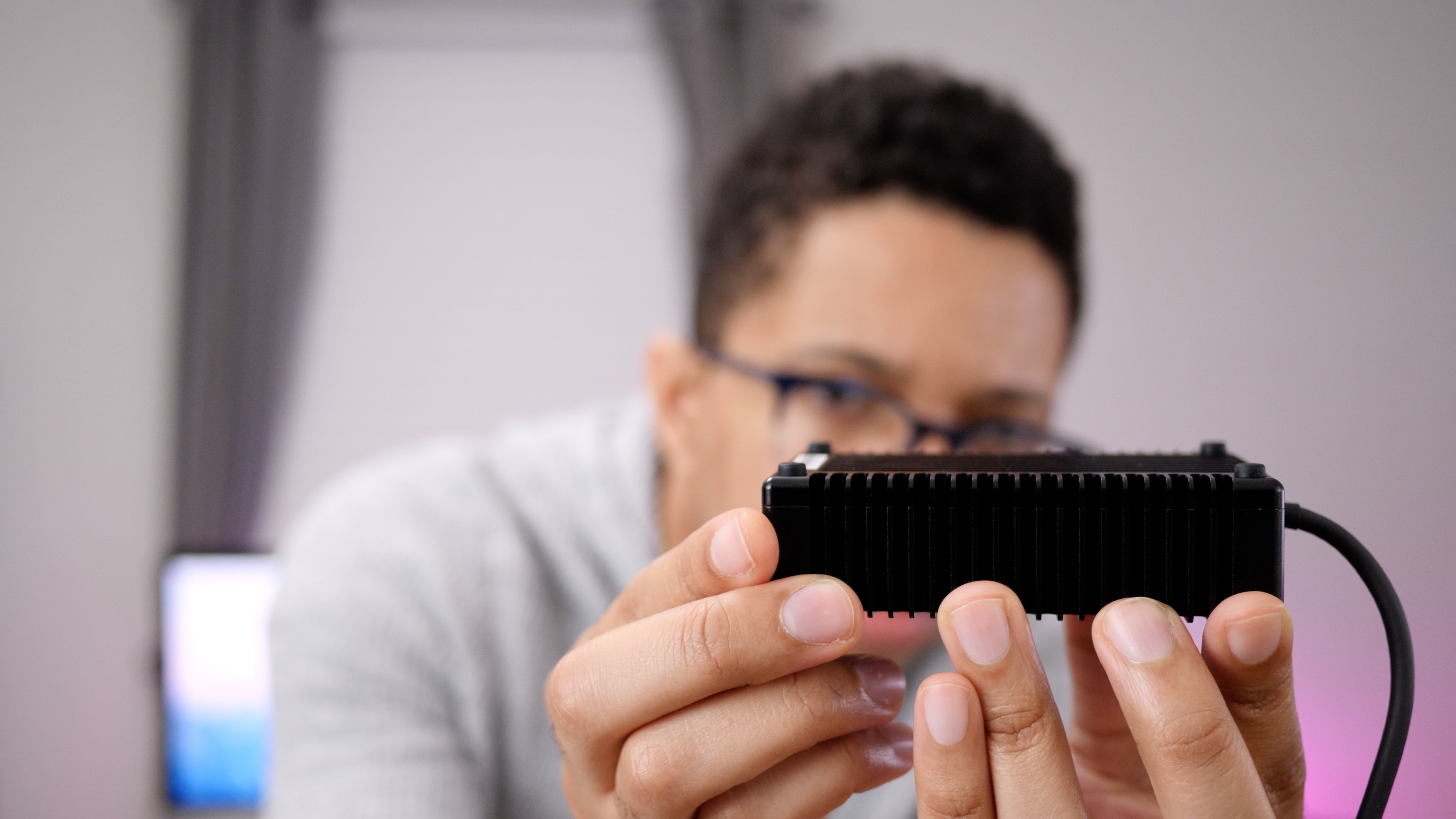 The bottom of the Fusion features four rubber feet to help keep the drive from sliding around on a working surface. Underneath each foot is a Philips screw that can be used to crack open the case, though this should technically only be done by Sonnet reps.

One of the more interesting aspects of the Fusion SSD is the fact that it features a replaceable 1.5-foot Thunderbolt 3 cable embedded inside the casing. The cable is accessible by separating the casing via the screws under the feet, but you should technically send it in to Sonnet in order to do so under warranty.

On one hand I like the convenience of knowing that my Thunderbolt 3 cable is always there, but on the other hand I would more enjoy the freedom to quickly switch between long and short cables when desired. That said, I understand why Sonnet made this decision, as there is already too much confusion about what constitutes a legitimate Thunderbolt 3 cable, and what does not. Having an “always-attached” cable prevents such issues from ever popping up in the first place. 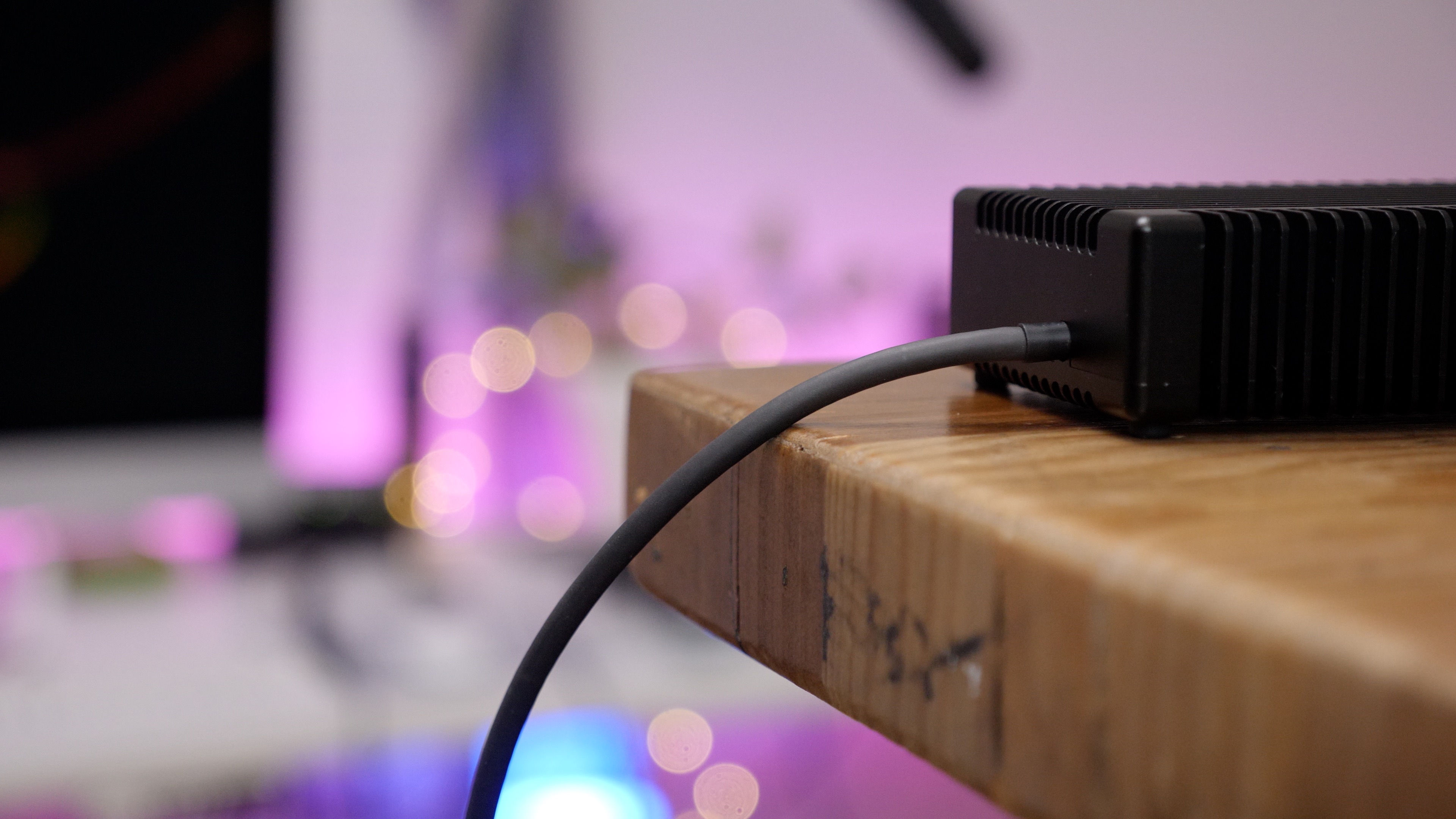 The Fusion SSD is super-simple to use; just connect the Thunderbolt 3 cable to a valid Thunderbolt 3 port, and you’re good to go. Being fully bus-powered, the Fusion doesn’t need an external power source, and features no on/off switches to interface with.

With macOS High Sierra, I did run into one little hiccup when initially trying to format the drive. High Sierra’s Disk Utility didn’t show the drive, even when selecting View → Show All Devices. I ended up having to format the drive using the diskutil CLI. I should note that this isn’t an issue with the drive itself, and you’ll only need to do this once. It’s also possible that retail versions will come pre-formatted for macOS.

As someone who regularly works with 4K, and even 6K video, the faster the external storage drive, the better. I’ve used some fast external drives, either in a single drive, or RAID 0 configuration. The fastest bus-powered external drive that I’ve tested thus far has been the Glyph Atom RAID 2TB SSD, but like other drives I’ve treid recently, it featured a USB 3.1 Gen 2 interface instead of Thunderbolt 3. The 2TB Glyph Atom RAID was definitely no slouch, however, and posted speeds that would easily accommodate 4K workflows.

Needless to say, Sonnet’s Fusion Thunderbolt 3 PCIe Flash Drive is in a whole different league when it comes to performance for a bus-powered portable drive. Sonnet uses Toshiba’s speedy 1TB OCZ RD400 Series PCIe NVMe M.2 SSD inside. As long as your computer addresses x4 PCIe Gen 3 lanes, like the 2017 13-inch MacBook Pro, then the drive will be able to push towards its theoretical sequential potential of 2,600 MB/s read and 1,600 MB/s write. The drive can also work at the tail end of a Thunderbolt 3 daisy chain, but Sonnet notes that performance may be slightly degraded if you do so.

I used my go-to disk speed testing app, Black Magic Disk Speed Test, to compare the Sonnet Fusion with the internal 128 GB NVMe SSD inside of the MacBook Pro (13-inch, 2017, Two Thunderbolt 3 Ports). Keep in mind that Apple generally uses some of the fastest flash storage that you’ll find in a laptop form factor. This test isn’t a 1:1 comparison, as larger internal drives met out better performance due to parallel NAND access, but it does a good job of illustrating the raw capability of Sonnet’s Fusion drive. 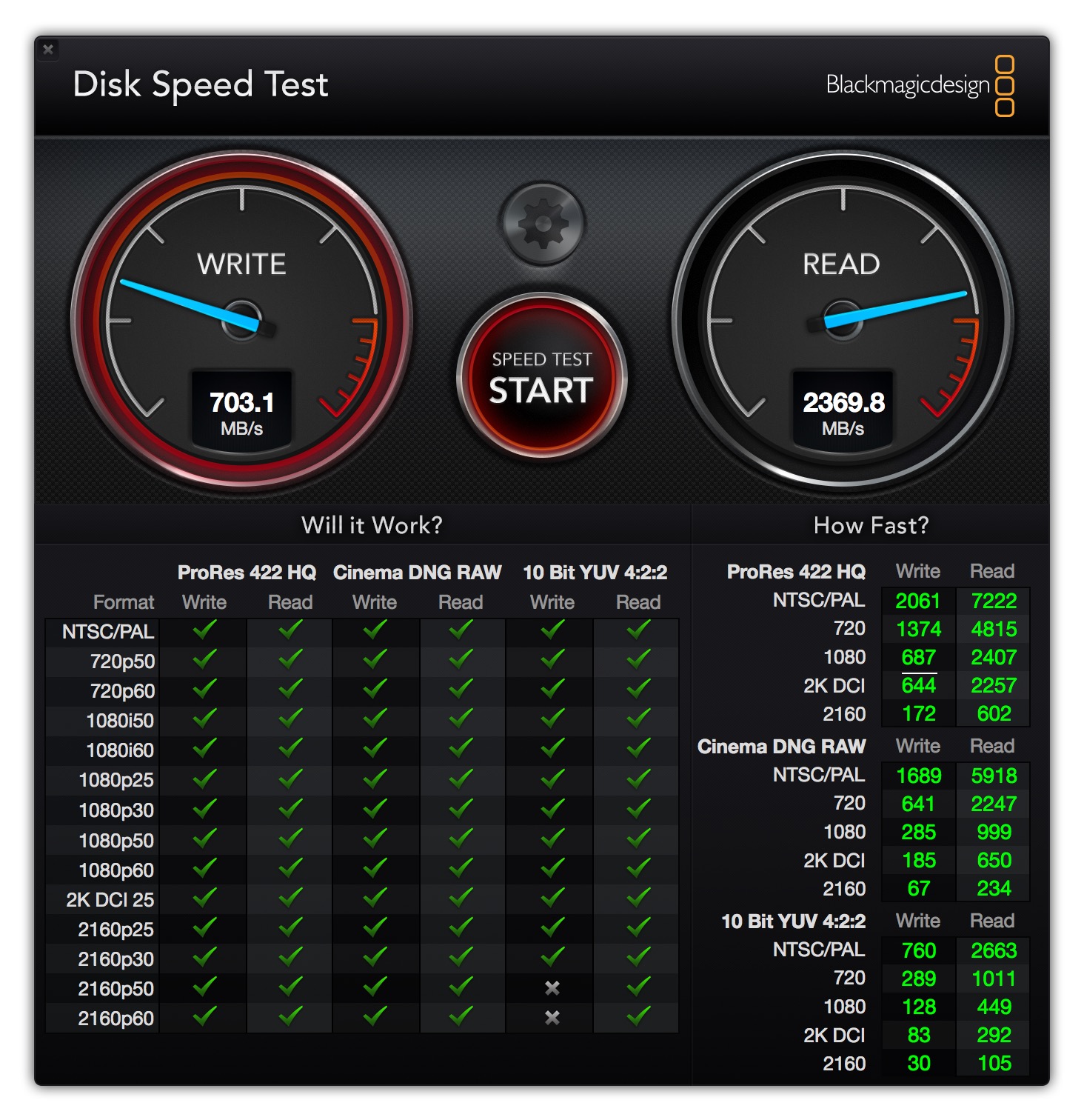 Here is a disk speed test running against the external Sonnet Fusion SSD: 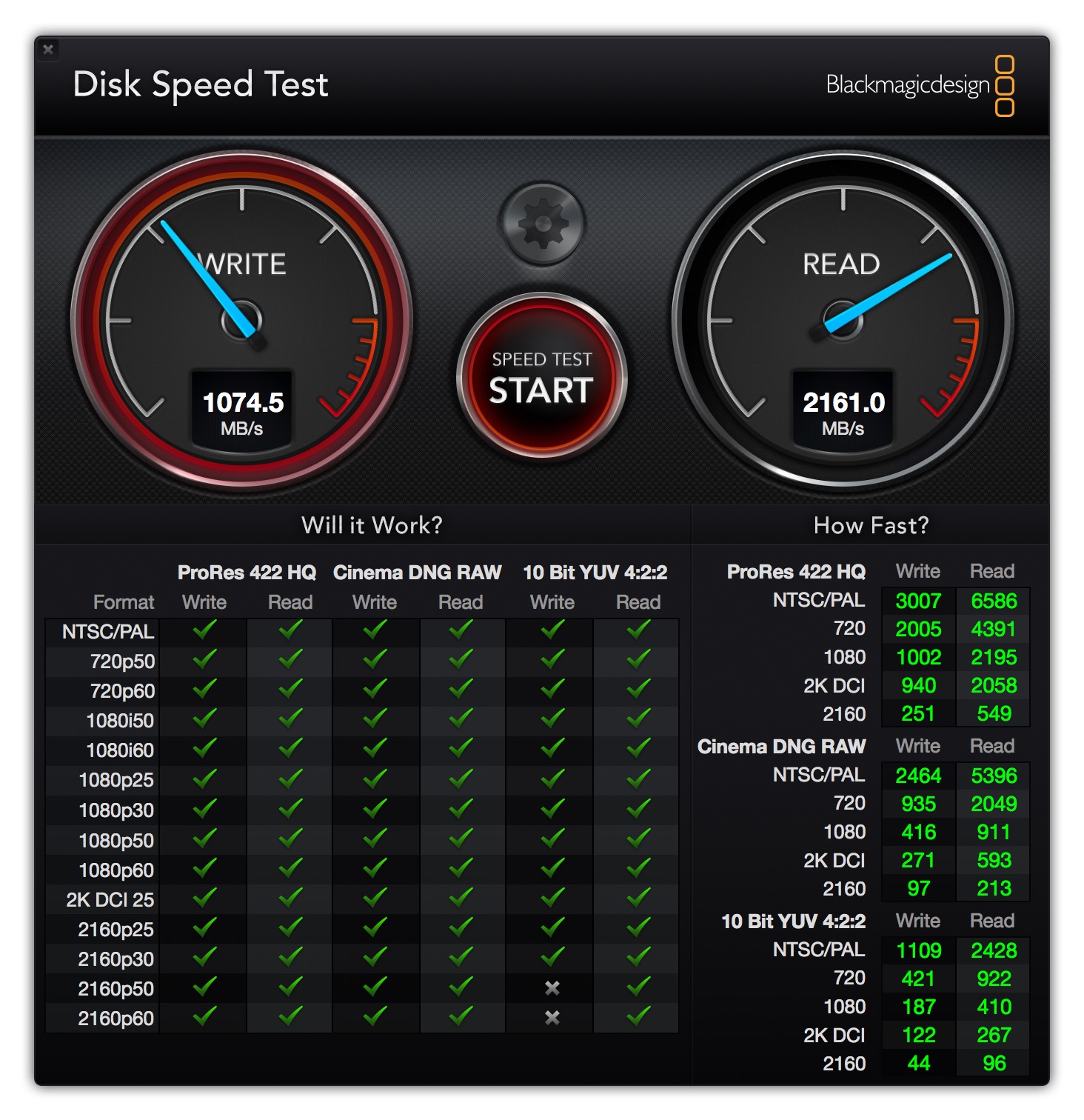 As you can see, the Sonnet external drive bests the MacBook Pro’s internal SSD in write speed, and gets well within punching distance of the internal drive on read. As mentioned, this isn’t exactly a 1:1 comparison when you factor in things like disk size, but it gives a nice general overview of the Fusion SSDs impressive I/O performance. Especially when compared to SATA 3 SSDs that are commonly found in external form factors is the performance noteworthy.

In order to test the theoretical speeds, I loaded up another one of my favorite disk speed test apps, QuickBench. This app allows me to perform a sequential read/write test with a relatively large transfer size. As expected, the internal SSD performed well on read speed, clocking in an average of 3046 MB/s over a span of five tests. For write, the average was a bit more pedestrian at 743 MB/s. 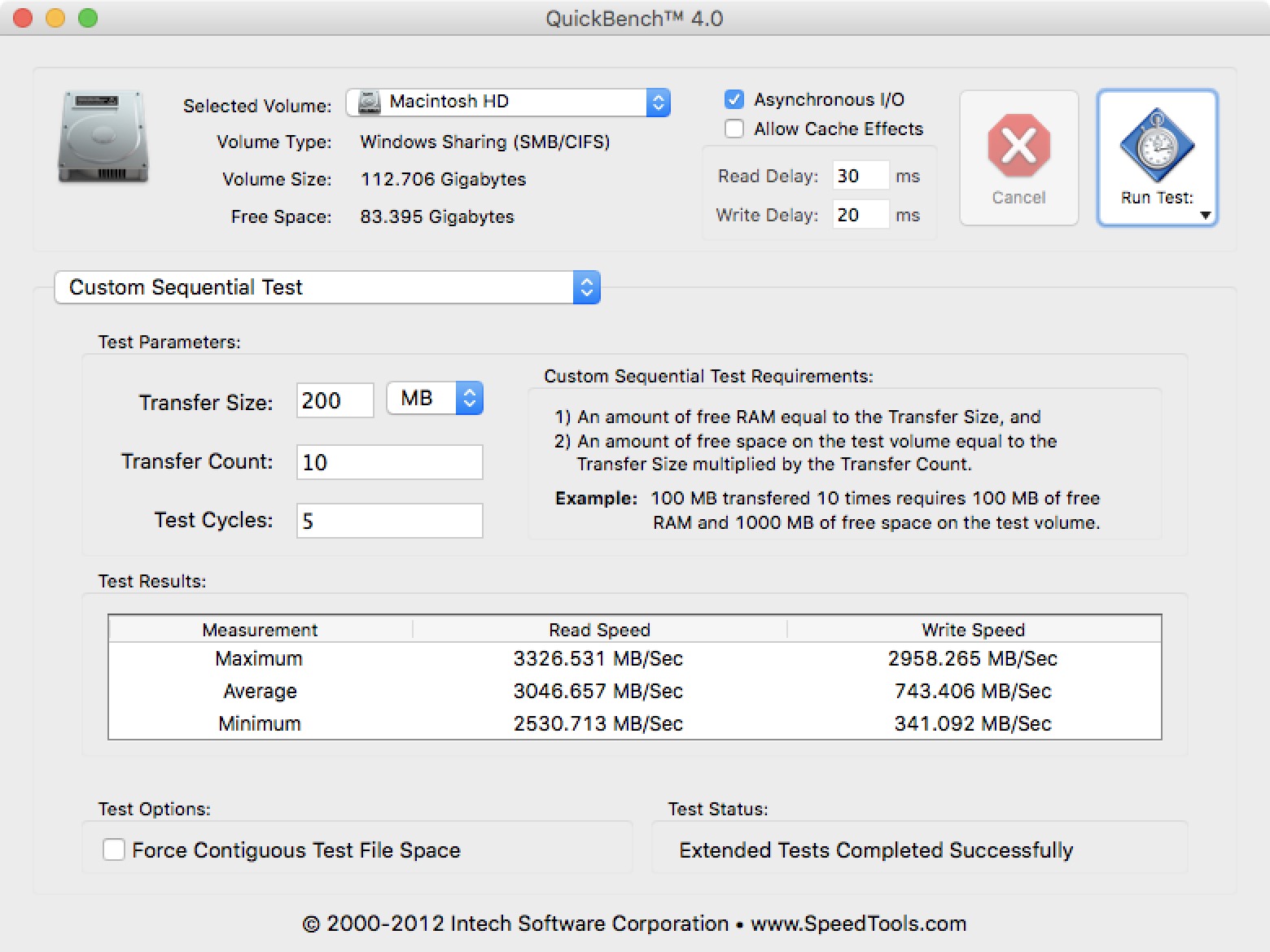 I ran the exact same test against the Sonnet Fusion SSD, which clocked average read speeds of 2460 MB/s and write speeds of 1345 MB/s. As you can see, Sonnet’s PCIe Fusion drive is consistently faster on write over Thunderbolt 3 than Apple’s internal PCIe SSD. When it comes to performance, it’s hard to find anything bad to say about the Sonnet Fusion drive. It’s far and away the fastest external bus-powered SSD I’ve ever tested, and it does so without needing to rely on a RAID 0 configuration. 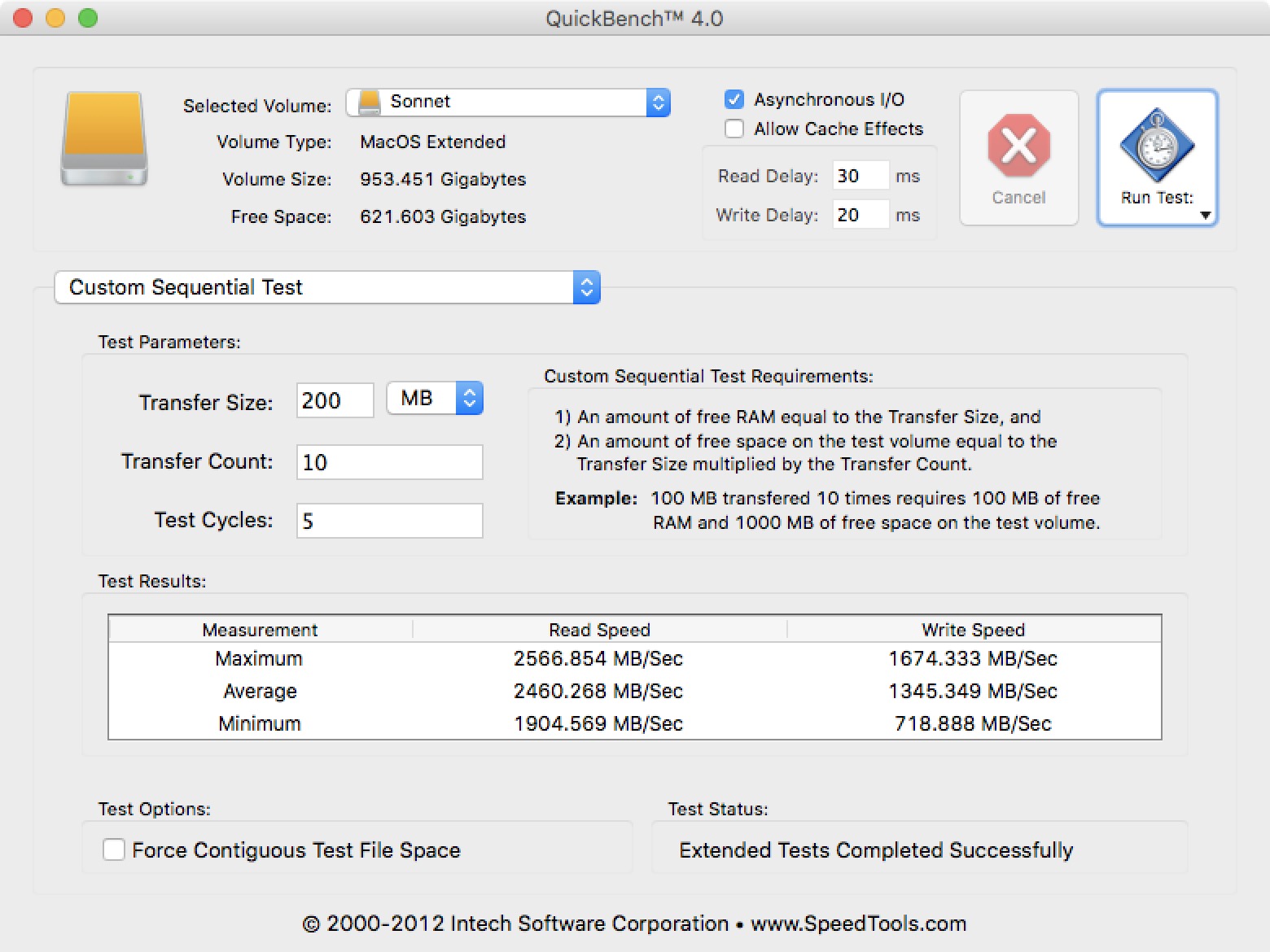 Sonnet advises that users should consider formatting the drive as exFAT for even better performance unless using it as a macOS boot drive. Speaking of such, this drive performs admirably as a macOS boot drive, and as we noted above, can actually be faster than Apple’s own internal SSD in some respects. This makes the Fusion SSD an ideal alternative boot drive candidate for those with Thunderbolt 3-enabled Macs with limited storage, or slow spinning disks like the hybrid Fusion Drives that Apple still includes inside its entry-level 2017 iMacs. 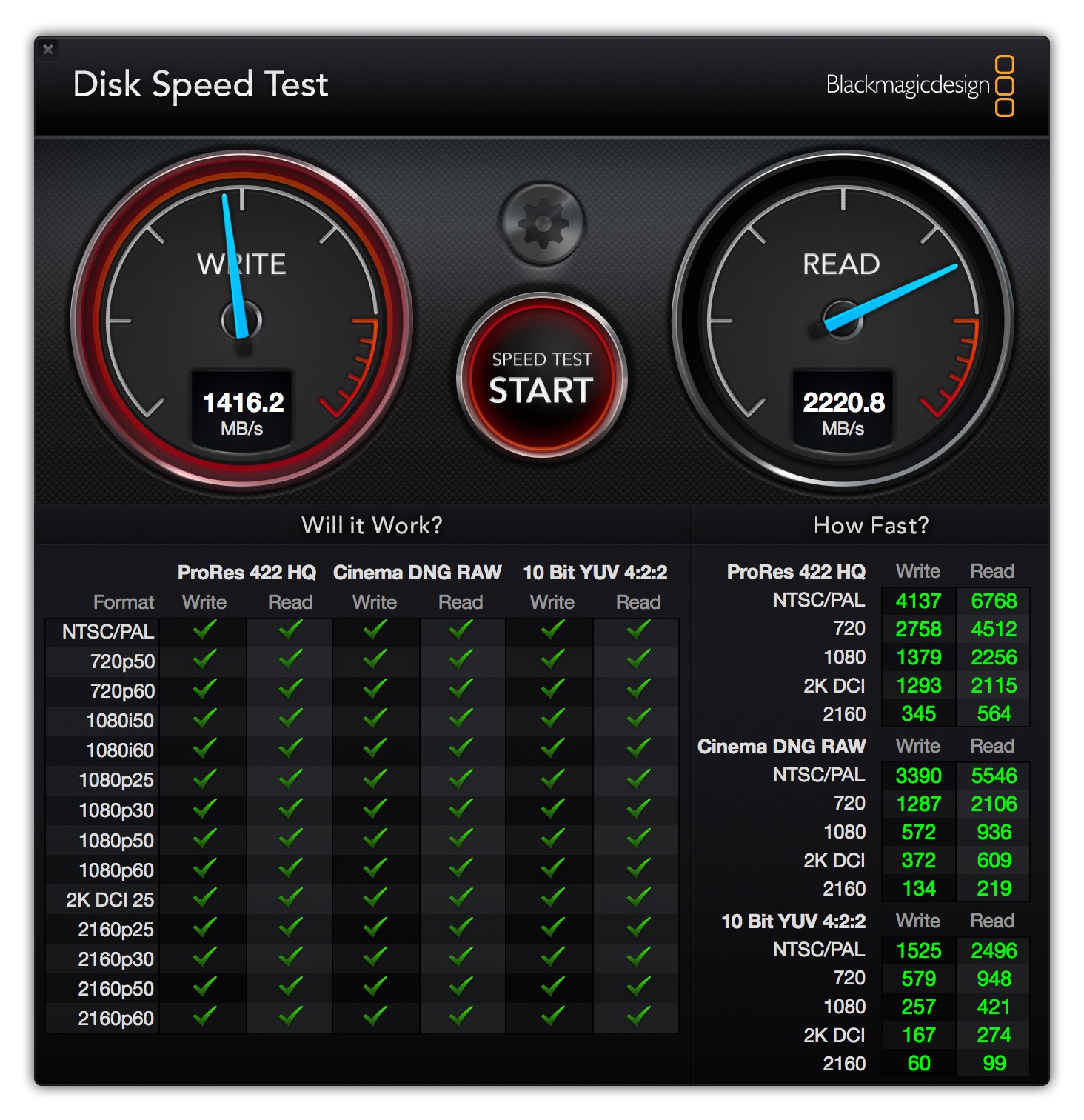 The biggest downside, obviously, is the $999 price. Fast flash storage is expensive, and fast flash storage in a bus-powered, compact, plug-and-play form factor is even more expensive. But when you consider that Apple charges $800 to upgrade the entry-level 2017 MacBook Pro from 128 GB to 1TB of internal flash storage, the price doesn’t seem quite as ludicrous. 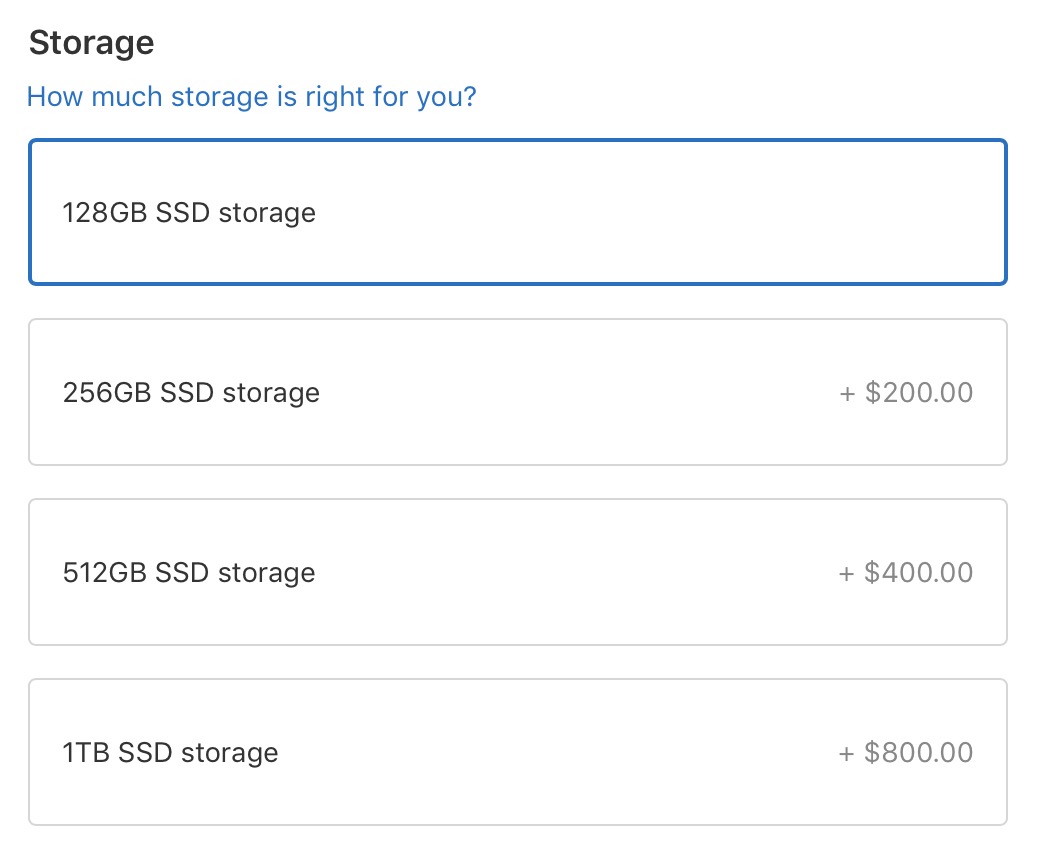 Apple doesn’t even allow you to configure entry-level 21.5-inch iMacs with anything above a 256 GB SSD, and to get a machine that has a 1TB SSD, you’ll need to pay a $1,100 premium over the entry-level model. As you go upmarket, SSD prices improve — a 1TB upgrade on Apple’s entry-level 27-inch iMac is “only” $700 — but it’s still expensive.

While the actual flash storage inside the Fusion SSD currently retails for around $550, there’s still a considerable cost involved with the enclosure, controller, Thunderbolt 3 cable, research and design, marketing, etc. The advantage of fast external storage is that its flexible, and can be moved from computer to computer. This makes an external, bus-powered form factor arguably more attractive from a convenience and long-term usability standpoint. 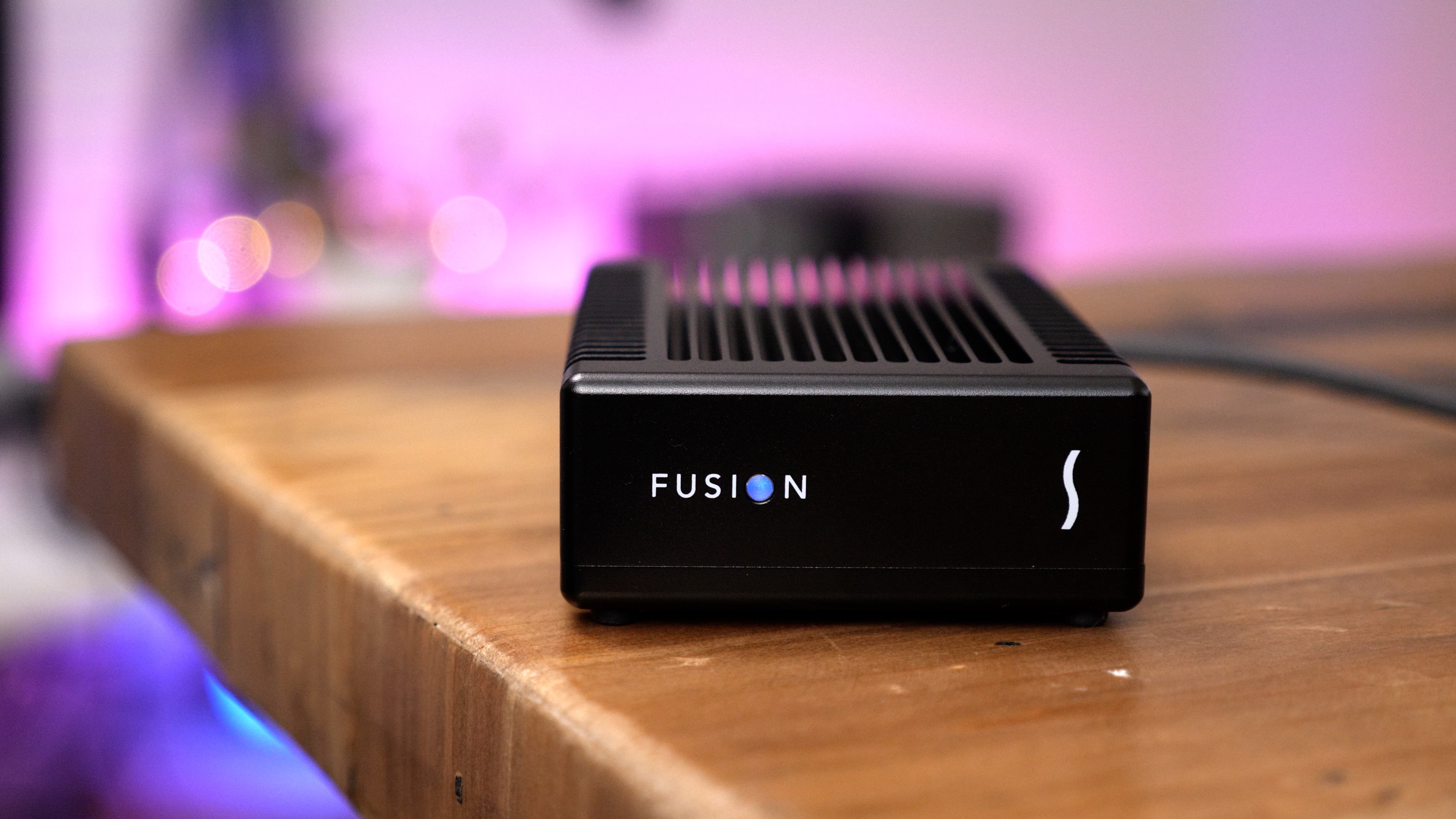 Granted, you don’t have to spend $1000 on the fastest bus-powered flash drive out there. Other, more modest offerings, such as Samsung’s T5 (review), provide a relatively speedy experience for a whole lot less. For example, you can pick up a 1TB Samsung T5 for under $400, or a 2TB Samsung T5 for less than $800. Just realize that the Sonnet Fusion Thunderbolt 3 PCIe Flash Drive is in a whole another league when it comes to speed. It can legitimately function as a macOS boot drive replacement, and in some cases might actually perform better than the already-fast SSDs found inside of Apple’s machines. That’s incredible when you consider ease of use, form factor, and flexibility of this bus-powered beast. Buy it if you require the speed, have a Thunderbolt 3-compatible machine, and have the budget to afford it.

What are your thoughts on the Sonnet Fusion Thunderbolt 3 PCIe Flash Drive? Stay tuned for additional hands-on coverage of other Thunderbolt 3-equipped Sonnet accessories.