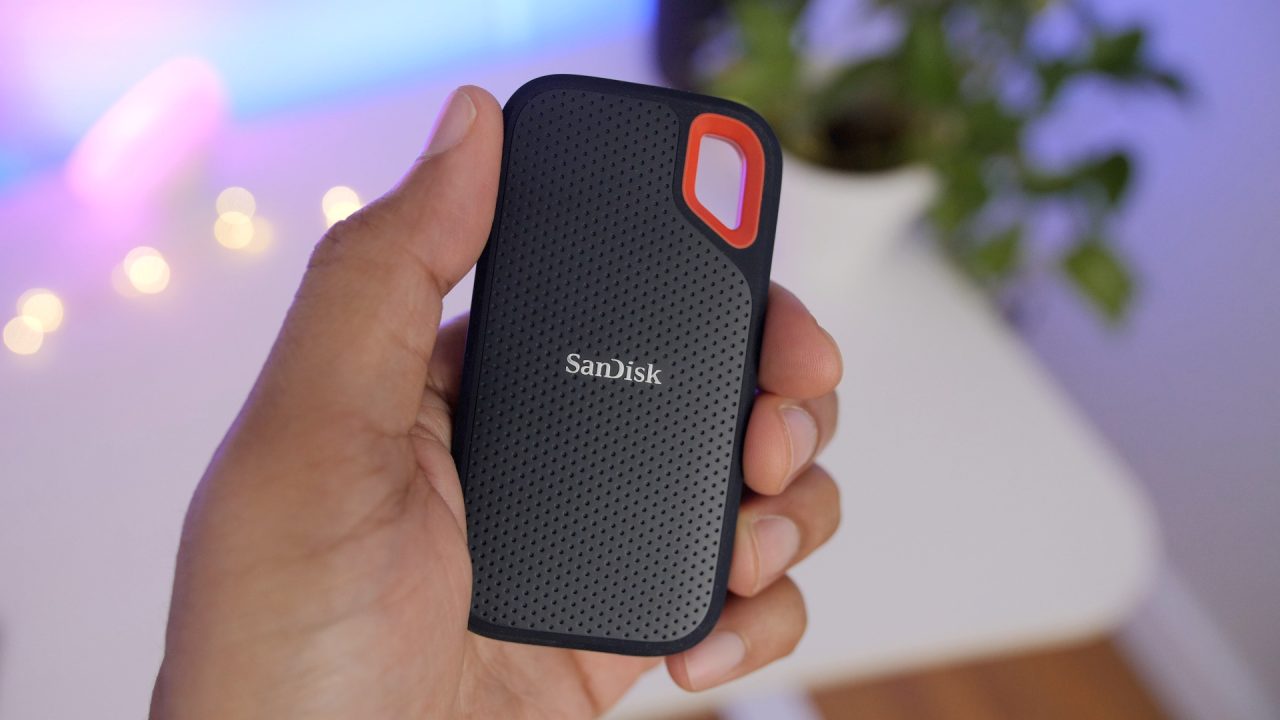 With this in mind, such upgrades can’t be reasonably justified for many users, which means relying on external storage where necessary. Thankfully, there is no shortage of external storage solutions for the MacBook Pro, with many of them featuring bus-powered USB-C connectivity for plug and play functionality.

SanDisk’s Extreme Portable SSD, available in various storage capacities, is one such product. Watch our video hands-on for the details.

The first thing that stands out about the SanDisk Extreme Portable SSD is its size. At roughly 3.5-inches tall, less than 2-inches wide, and .25-inches thick, it’s very compact and can easily fit in a pants pocket. The drive is made up of plastic and soft touch rubber on the rear, along with a full rubber bumper surrounding the exterior of the enclosure.

The drive doesn’t feel particularly robust, especially when compared to other drives, like the Samsung T5, with metal housings on the outside. Yet, SanDisk says it designed its SSD with portability and somewhat precarious environments and situations in mind. For example, it’s IP55 rated, meaning it’s protected from limited dust ingress, and from low pressure water jets from any direction. SanDisk also notes that the Extreme Portable SSD is vibration and shock-resistant, and is able to withstand up to a 2-meter drop. All of these claims are backed up by a 3-year limited warranty, which should offer users some peace of mind. 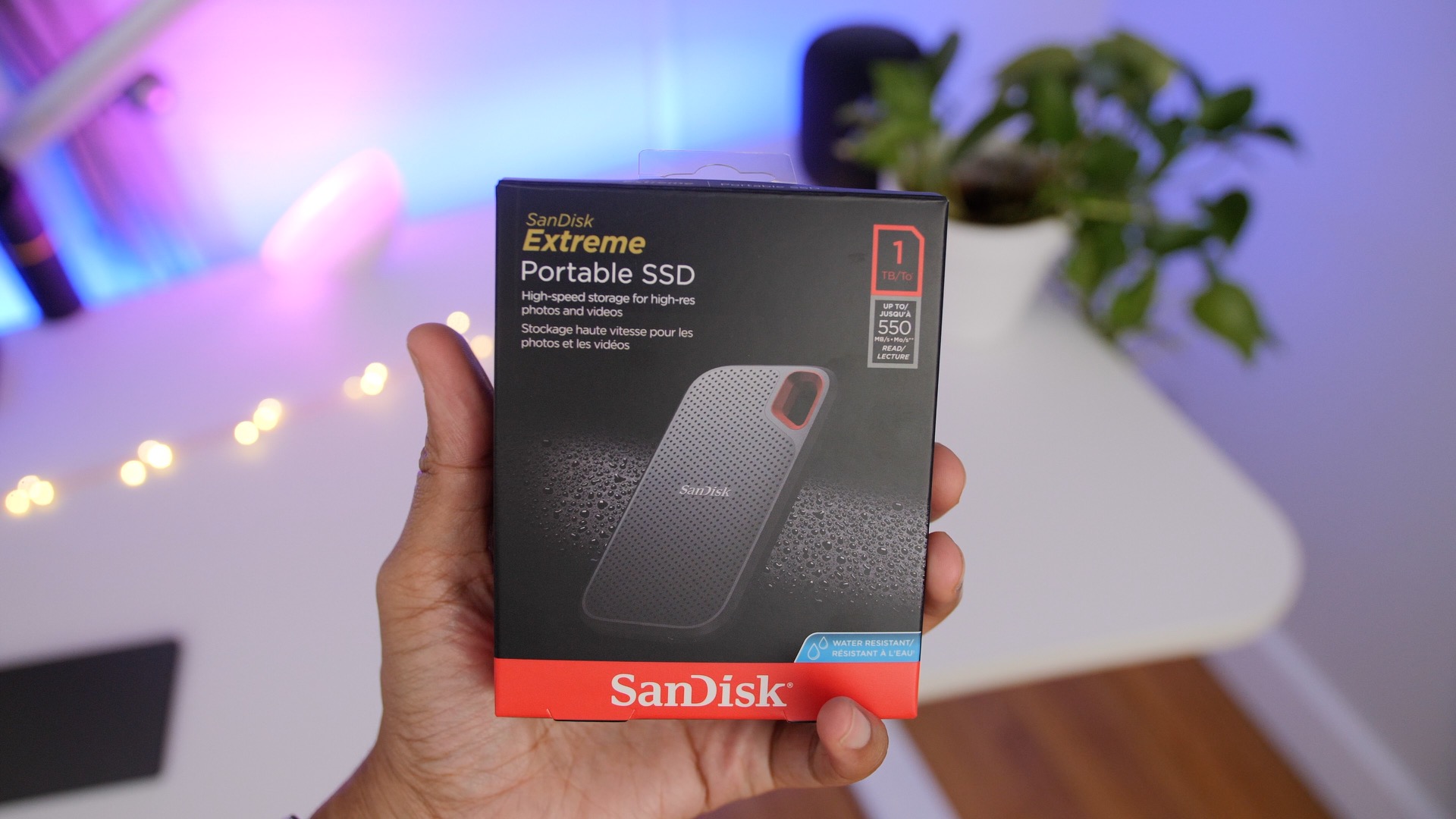 Inside the box, you’ll find the drive, a short 7-inch USB-C to USB-C cable, and a USB-A adapter for connecting to legacy ports. The SanDisk Extreme Portable SSD comes with a single USB-C port on the bottom for connecting to the host computer, which means it is fully bus-powered and ready to go upon connection. 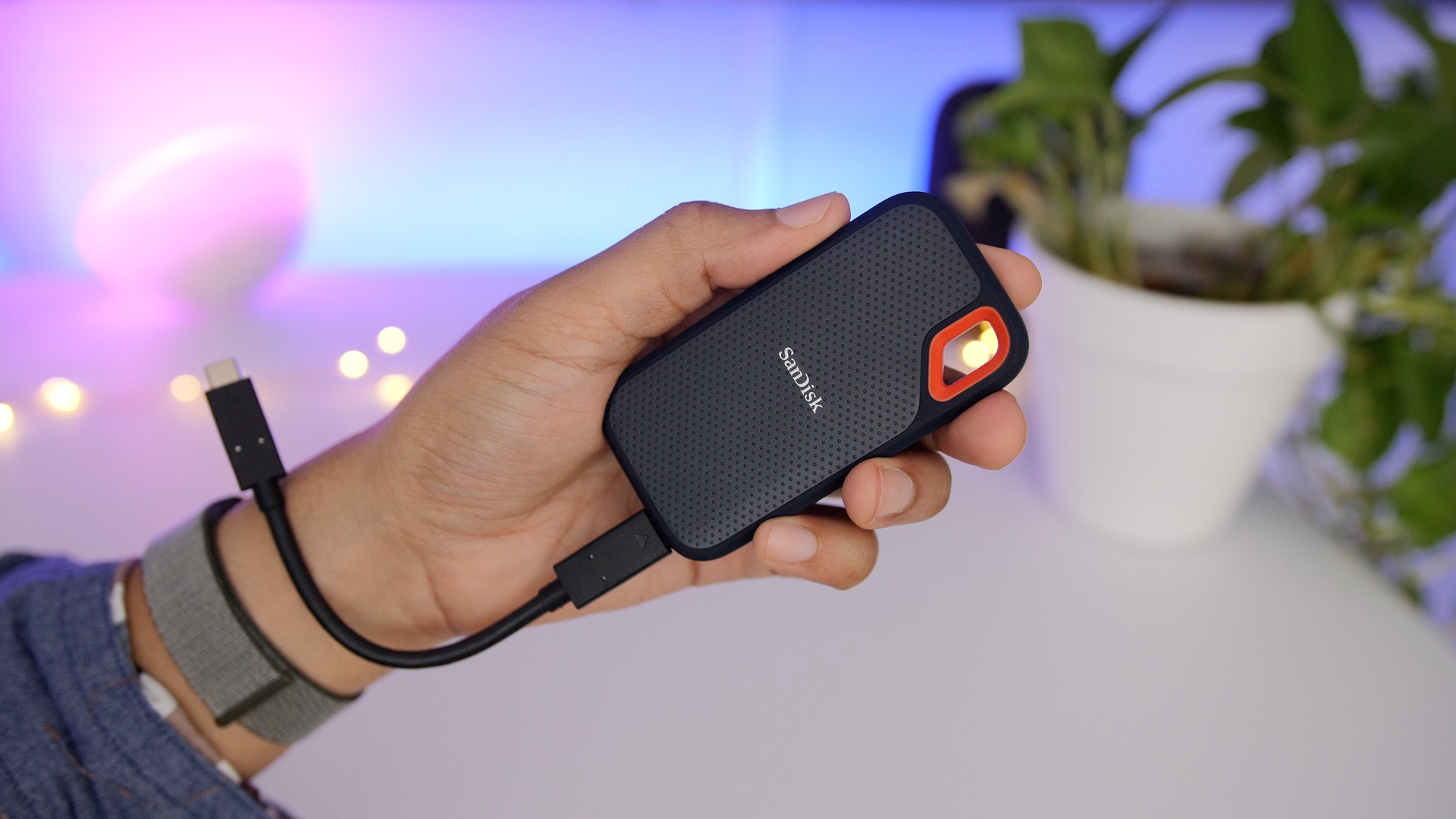 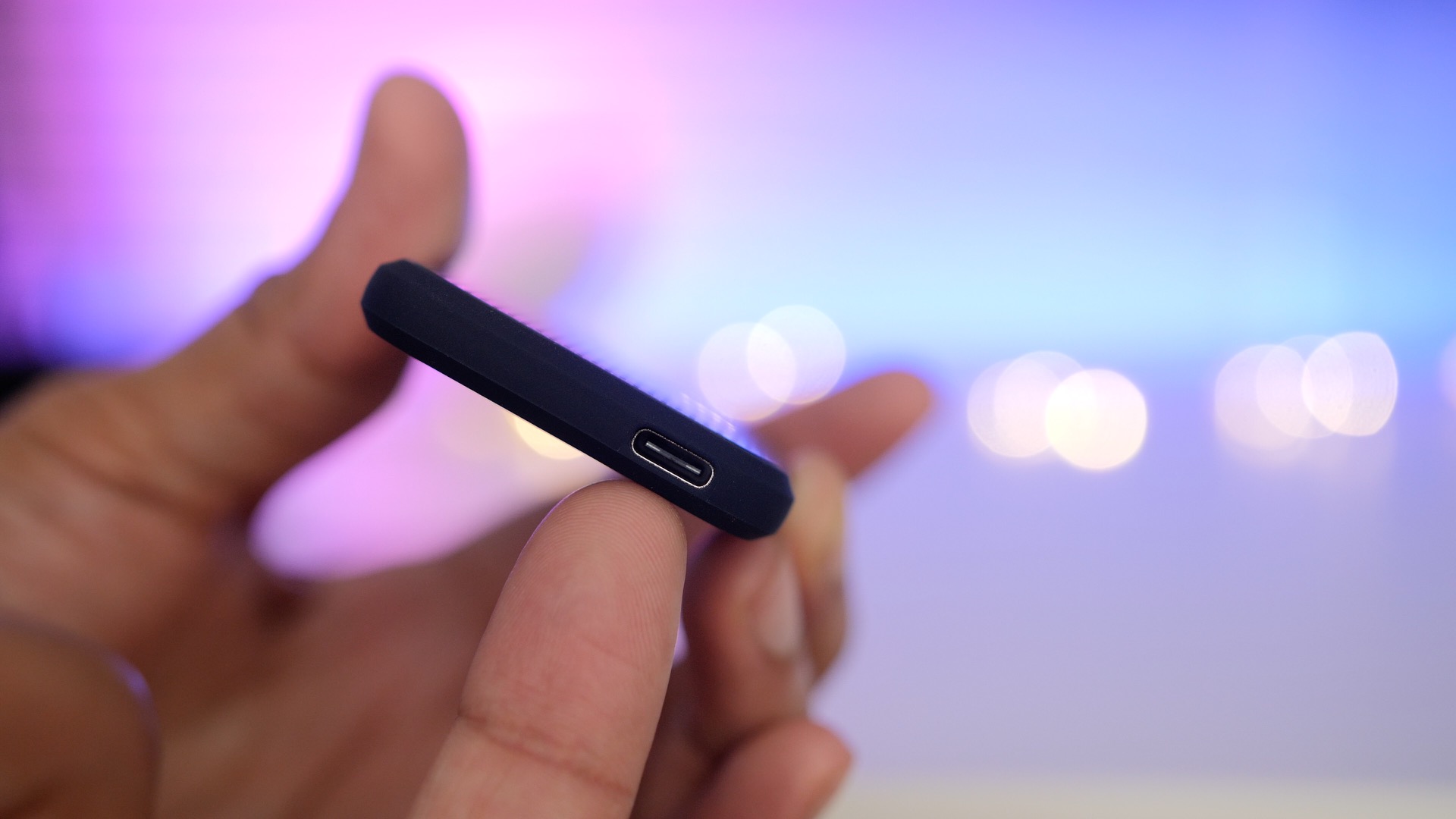 The drive is pre-formated using ExFat, which allows for both Mac and Windows compatibility out of the box. If you’re a Mac user, you can venture into Disk Utility and format the drive however you’d like.

As you can see, read speeds in the Blackmagic test averaged around 521 MB/s, while speeds with the QuickBench sequential test trended closer to the 550 MB/s rating on the box.

This drive is plenty fast enough for 4K ProRes 422 HQ workflows at 60 frames per second, which makes it a solid MacBook Pro / Final Cut Pro X companion drive.  I tested both ExFat and Mac OS Extended (Journaled) formats using these two speed test utilities, and found the results to be identical. 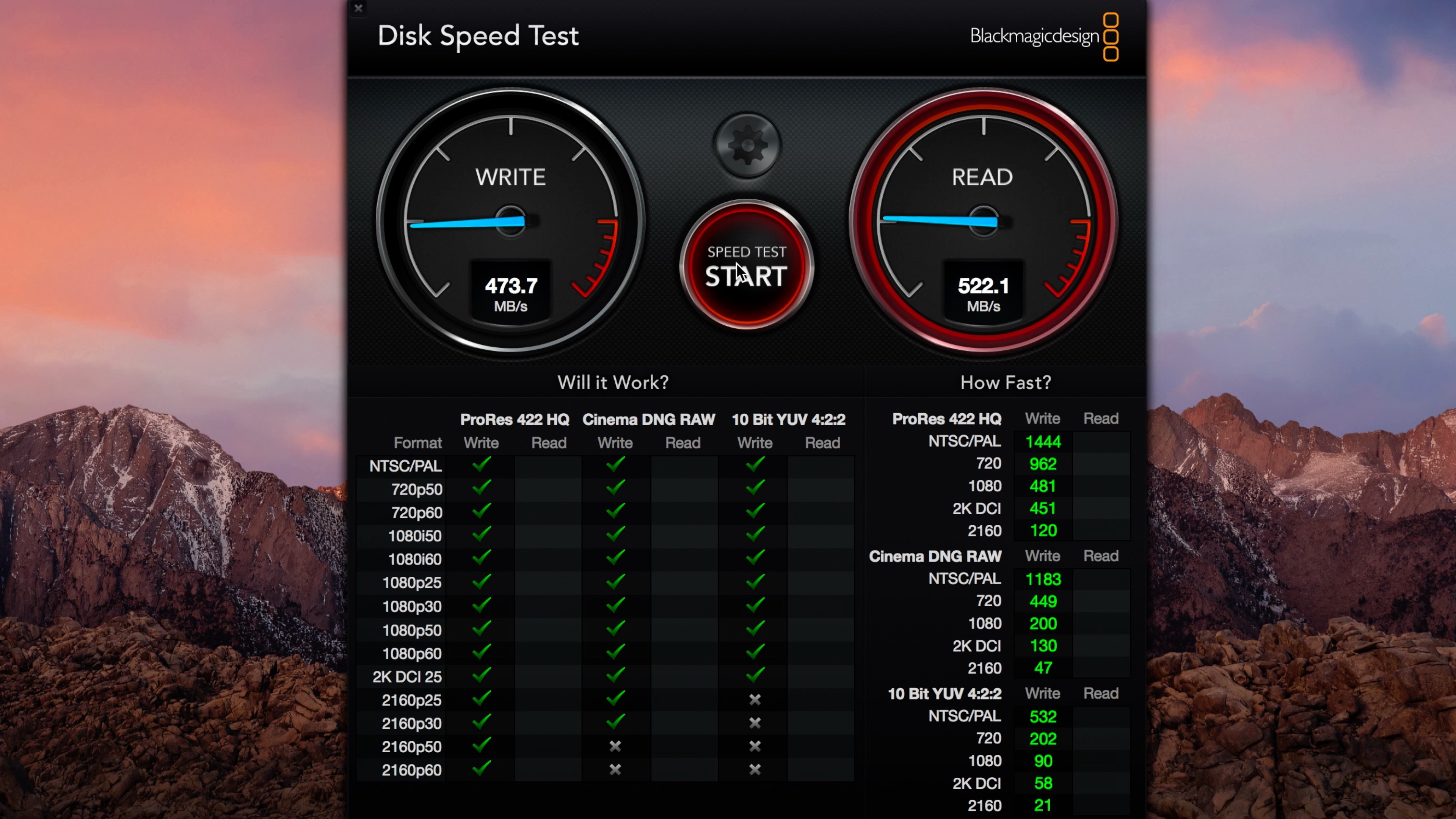 My biggest reservation with this drive is with its longterm durability. The plastic front exterior doesn’t exactly exude confidence as far as build materials are concerned. Yet, SanDisk has obviously designed this drive to be portable, traveled-with, and in some cases used in less-than-ideal environments. The drive even includes a hole in the upper right-hand corner for attaching a loop or even something like a carabiner, further emphasizing its on-the-go ability. So, maybe I shouldn’t be so worried about the drive’s long-term durability? I’ll keep testing and report back. 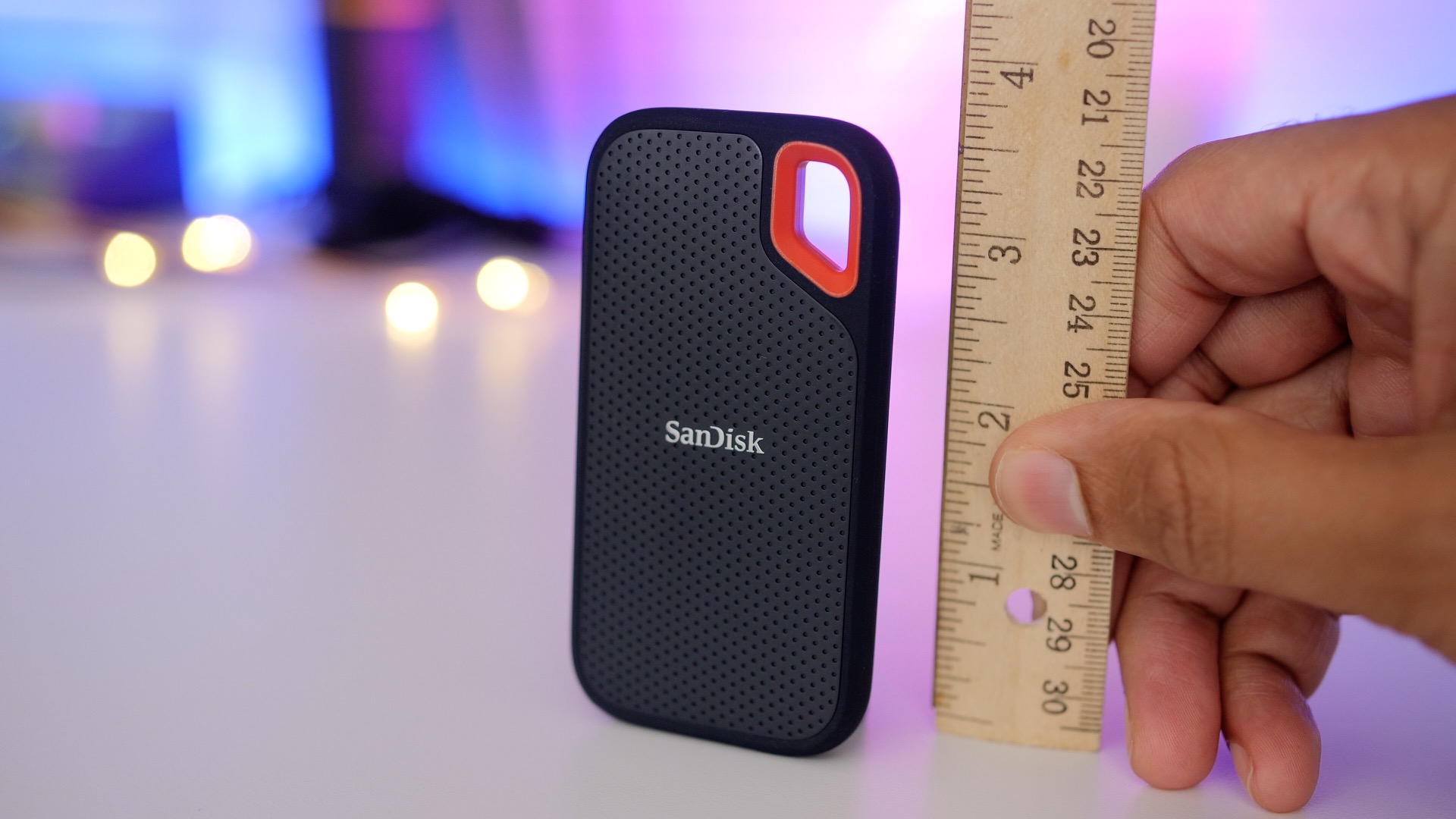 My favorite things about this drive include its extremely light weight, that it’s bus-powered, and it lends you plenty of room for handling storage-heavy tasks like video editing. If you need more MacBook Pro storage, then a compact drive like the SanDisk Extreme Portable SSD may be just what the doctor ordered. You can also find the drive available from B&H.

Do you like the idea of using a portable SSD with your MacBook Pro, or would you rather drop lots of money for more of Apple’s ridiculously-fast internal SSD storage?